Why Toronto is the centre of the zombie universe

Last year, Toronto's Zombie Walk swelled to include over 15,000 shuffling, slow-moving un-dead people. This year, there's an outbreak of several other zombie walks on top of zombie wrestling and a Zombie Prom.

Why does it feel like Toronto is ground zero for zombies? Where are they all coming from? And should we be freaking out?

The short answer is no, because at the of the day there's a very good reason it feels like we're at the centre of the zombie universe.

It's not the quality of the soil in our graveyards or the millions of ready-to-eat brains around the GTA that's attracting zombies. Instead, we're a city that's open to zombies, a city that includes lots of tiny communities, which enable things like a parade of mindless corpses to happen. 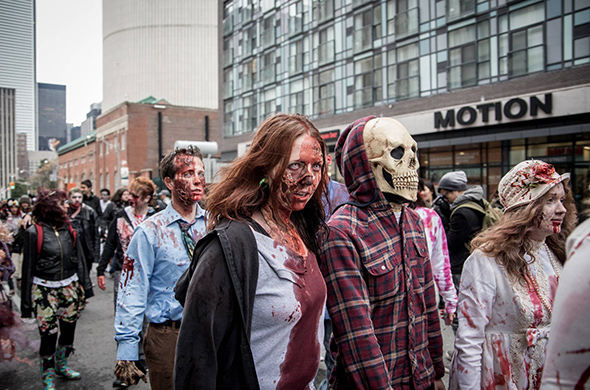 "When you go to a zombie walk, you realize you're walking with 15,000 people shuffling along, and there quickly becomes a sense of community that isn't based on religion and not money or running for cancer," Zanini says. "It's just based on a sense of belonging, and the whole world wants to belong. If you're a zombie, all you've got to be is dead."

It's the innocent feeling of belonging that fuels the city's zombie fever. Dominic Etynkowski runs a Zombie Survival Camp and heads up the Zombie Prom. He also thinks that's what makes Toronto so unique in the living dead phenomenon.

"Who doesn't just want to go around killing zombies all day?" he asks. "It's an moving easy target, why not? We're one of the largest city's in Canada, it's very liberal, and people love to dress up. I think it would have evolved naturally.

"It's a bunch of weirdos getting together and suddenly everyone is praising you about how you got that wound to look so amazing. Any other day in your life, people just think you're weird and don't get it.

"It unifies people under this weird sub genre and you can connect that way," Etynkowski says. "It's the power of the hoard."

His zombie camps teach people to survive in a Walking Dead-style apocalyptic city. The prom is for zombies, fans of zombies, and people who just think zombie culture is cool to get together and celebrate the end-of-days instead of working against it. The prom acts as a fundraiser, but so many zombie activities in the city are free; that's another selling point. 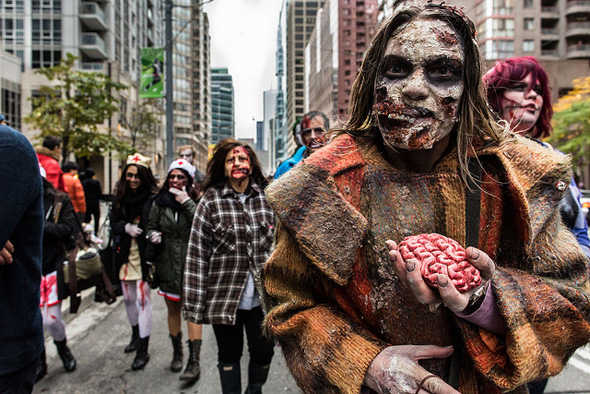 "It's fun and it's free, that's the keyword," Shannon Stafford says. He's an ex-board member and is running the march on St. Clair this year. He also runs cemetery tours via Historic Headstones of Toronto. "Me and my family we're going to the walk, then Night of the Dread... it's a multi-part day of safe Halloween fun."

It all comes down to community, and a good vibes, no pressure event that's free and inclusive. Instead of one, official city-wide walk this month, there are community-driven events in Brockton Village, on Church Street, and the previously mentioned St. Clair march. These will most likely fester and multiply by next year.