Like traditional rugby (and really, most sports), the objective in underwater rugby is to get the ball in the goal. However, in underwater rugby, balls are filled with saltwater so they sink to the bottom of the pool, and players, six per side, wear fins, masks and snorkels instead of jockstraps and rugby boots.

Underwater rugby is also a full contact sport like regular rugby, but the underwater aspect can make it joint-friendly for people with previous injuries or joint problems. UR is played in deep pools (TURC practices in Rosedale Heights School of the Arts Pool, almost 13' deep) so players can move - and attac k- from all directions. 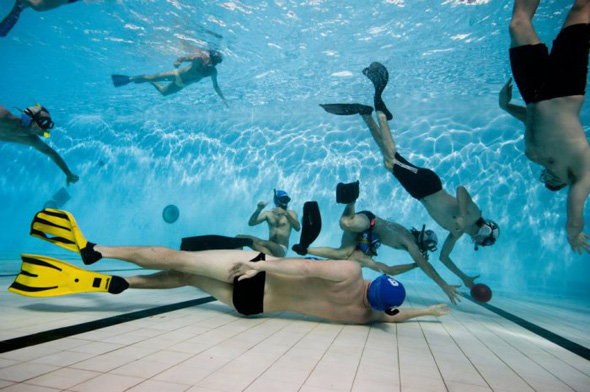 The TURC was born when Contreras moved from Colombia to Etobicoke for work. At school in Colombia, Contreras was a member of the swimming club when a teammate invited him to play underwater rugby.

"The feeling of flying, the intensity of the game, the passion..." Contreras says, on falling in love with the sport. That was nine years ago. Since then, he was a member of a UR team in Bogota, Colombia before coming to Canada.

Since the TURC's inception, the club is growing fast. They participate in thrice yearly tournaments and practice twice weekly. While some players have backgrounds in swimming, many don't, and members range in age from people who don't remember life without gmail to people who remember when John Diefenbaker was in office. 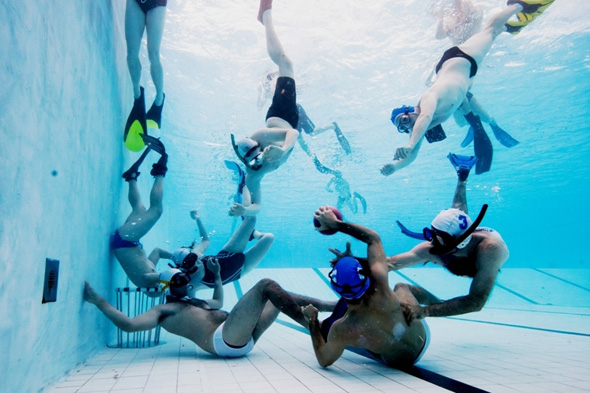 Though they are currently training for the Underwater Rugby World Championships, they're always recruiting new members to, in the words of personified acid flashbacks Hal Johnson and Joanne McCleod, keep fit and have fun. Check out their Meetup page for more info.