What you'll see at the 2015 Toronto Auto Show

The 2015 Toronto Auto Show kicked off with a keynote address from Ford that touched on every possible theme in the auto industry's repertoire. Joe Hinrichs, president of Ford in the Americas, talked about congestion, pollution, urbanization, social media, China, millennials and autonomous cars in a speech that was equal parts economics and sociology.

I patiently endured the speech, knowing that the new Ford GT was sitting under a big blue sheet just behind him.

Hinrichs and Ford Canada president, Dianne Craig, also announced that the GT, Ford's halo supercar, and the successor to their Ferrari-beating '60s race car, would begin production next year in partnership with Multimatic in Markham.

That just goes to show that despite all the talk of new technologies and a smarter, greener future for the car, the auto industry still runs on pistons and gas and the brute promise of speed. 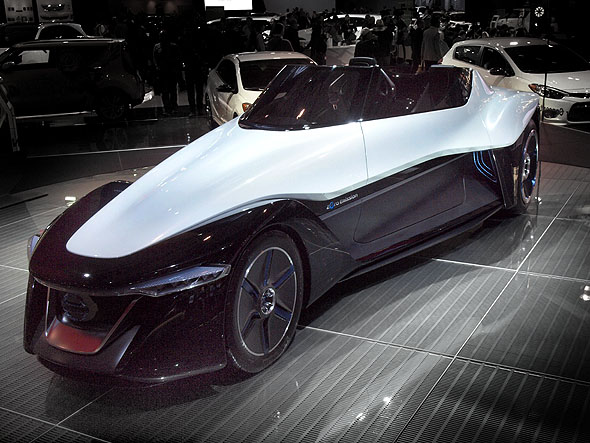 That isn't to say that automakers aren't pursuing a post-hydrocarbon future. Nissan reserved one of their two podiums for the BladeGlider concept, an electric vehicle inspired by their startling-looking but troublesome DeltaWing endurance race car.

At the same time, however, the other podium was dominated by the monstrous new Titan truck, a diesel-powered V8 behemoth that probably looks more at home in the Alberta tar patch than on any city street. 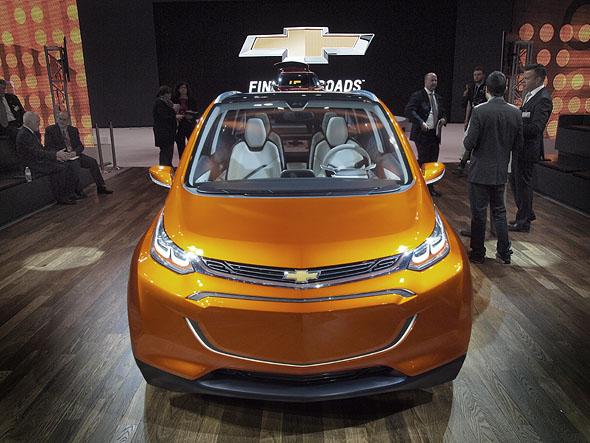 Chevy's showcase revolved around their new Volt, redesigned to look a lot more like any other sedan, and their Bolt prototype, a five door model meant to compete with BMW's i3. This model is targeted to hit the streets in two years and boasts a 200-mile range on a charge. 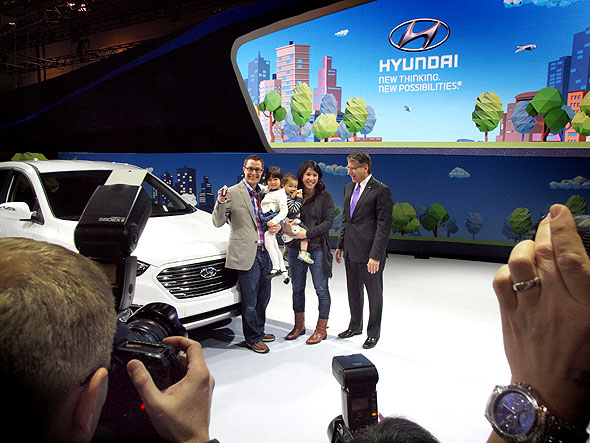 Hyundai upped the ante even further by rolling out the first of their hydrogen fuel-cell powered Tuscon crossovers in front of the press. They marked the occasion by presenting the keys to its first buyers, a photogenic Vancouver family. Don't bother hoping to drive one any time soon, the fuel cell program is limited to Vancouver for now. 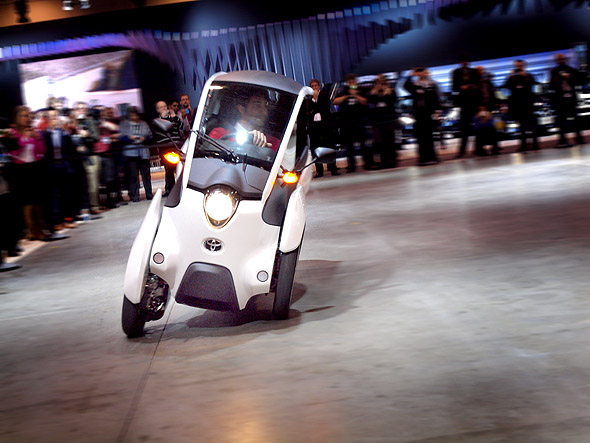 It's a single-person vehicle that they demonstrated by driving in figure eights around the concrete floor to show its ability to lean into corners. A fantastic piece of engineering, to be sure, but it was hard to think of how it would find a place on either our roads or sidewalks under any current traffic laws or regulations.

It took me a moment, though, to realize that while Toyota obviously has no intention of actually producing the car in any significant numbers, it is looking to get the attention of Baby Boomers as they transition from their Lexus and Benz years.

The frequent use of the phrase "personal mobility vehicle" by Toyota made me realize that the iRoad is a souped-up and branded evolution from the motorized wheelchairs that I'm seeing more of these days. Many of which are finished in Ferrari red and accessorized with a prancing pony sticker placed by the children and grandchildren of the nonnos who drive them along St. Clair W.. 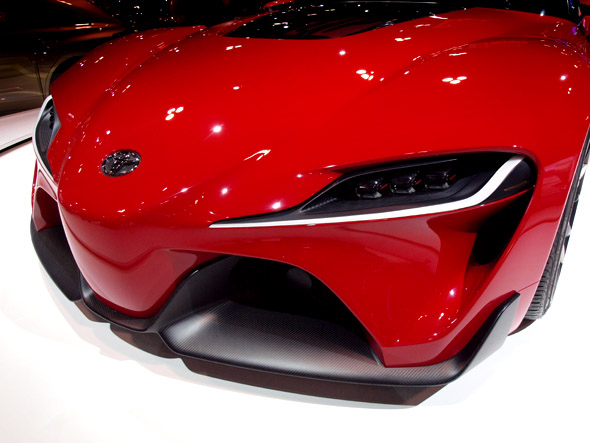 Toyota teased us by bringing along the FT-1, the luscious concept vehicle that they insisted on calling their "ideological pace car." Meanwhile, they used their "kiddie brand" Scion to target a younger demographic. 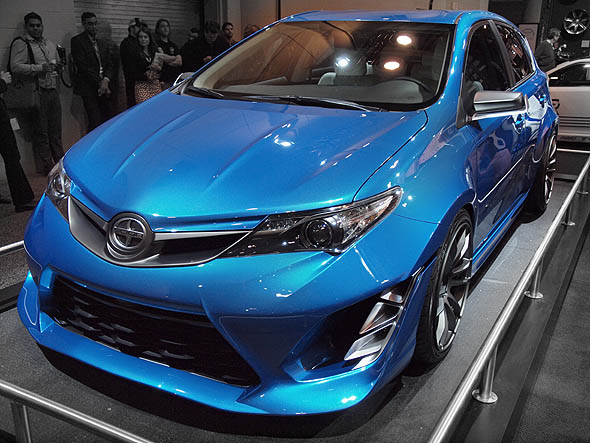 Amidst the race-prepared FR-S sports cars on their showroom floor, they presented the iM, a hatchback concept that's supposed to be just a year or two from actual production, and an overdue entry in a market segment that Scion should have tried to own from the beginning. 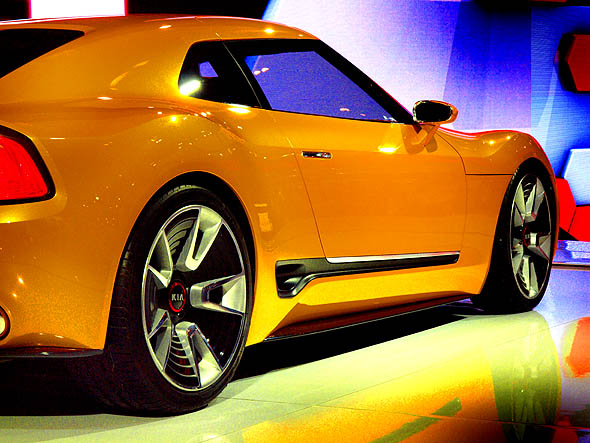 At the Kia booth, the automaker made an abrupt departure from their generally zipless line of autos with the GT4 Stinger, a sports car concept model that looked like a pastiche of familiar classics but done with just enough conviction to pull off. Imagined with a 315 horsepower turbocharged 4-cylinder engine under the hood, it would only make sense, if it ever gets built, as a no-frills entry-level sports car to compete with the Scion/Subaru FR-S/BRZ. 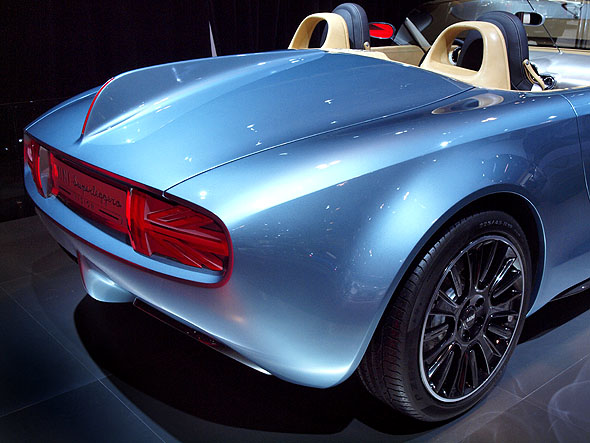 Another exciting concept came from Mini, another sports car that does an about-face by going small and light. The Superleggera Vision takes the Mini's distinctive front end and evokes the much-loved Austin-Healey bug-eyed Sprite, but it's at the back where things get exciting, with a set of Union Jack taillights and a central fin that harks back to Jaguar's '50s race cars. 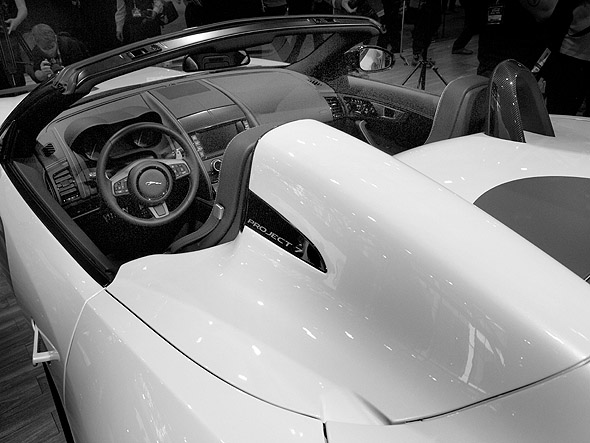 Jaguar's Project 7 edition of their new F-Type sports car looks like a concept, but the model on the floor at CIAS was a production vehicle. Only seven will be imported into Canada, and all pf them were sold before they crossed the Atlantic. 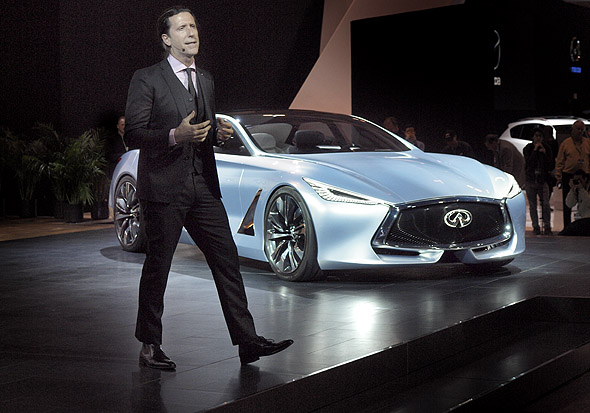 The king of this year's concepts came from Infiniti. The Q80 is a beauty, to be sure, but it was launched with an unintentionally hilarious spiel. The company's head designer listed a bridge, the human eye, the last phase of the moon, Sophia Loren and a black swan as inspirations for the design. 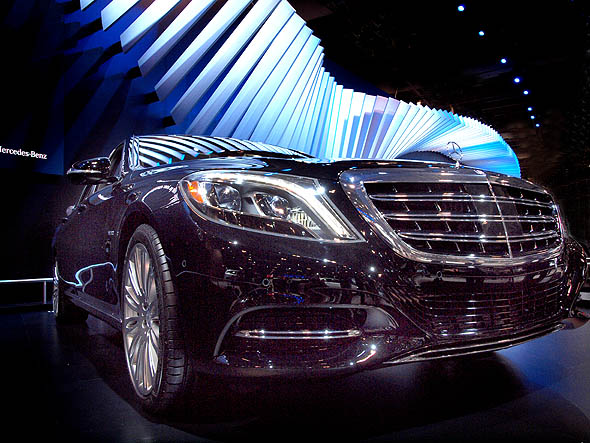 Luxury car makers had a mixed bag on offer. Mercedes Benz revived the Maybach name as a model instead of a marquee with what's probably the ultimate S-class sedan. Meanwhile Lexus went in a whole different direction by spearheading their new RC model with a new motorsport division that's sending the RC-F GT3 onto race tracks all over the world with a lethal-looking set of modifications, including this year's best rear wing. 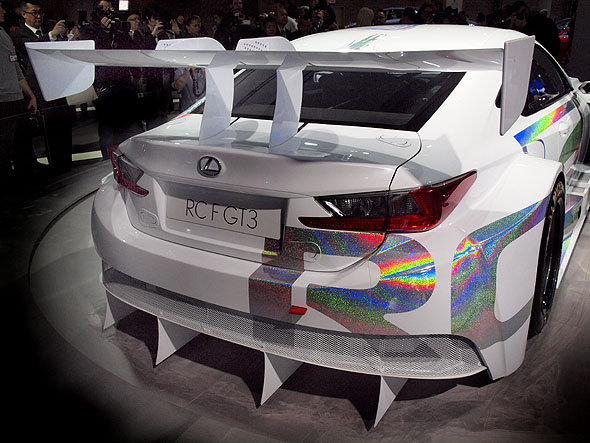 Fiat-Chrysler went straight for the gear-head heart with two very different cars, putting the unholy 700-horsepower Dodge Hellcat on centre stage while, off to the side, displaying a coupe and a convertible version of Alfa-Romeo's gorgeous 4C. 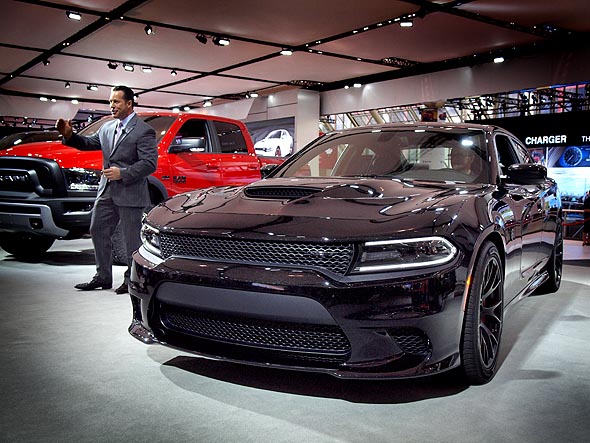 The Hellcat will no doubt be hitting car blogs very soon as its new owners discover how badly prepared they are to handle that much power. The 4C is a welcome return to North America from a brand that had brought Italian performance to the masses. 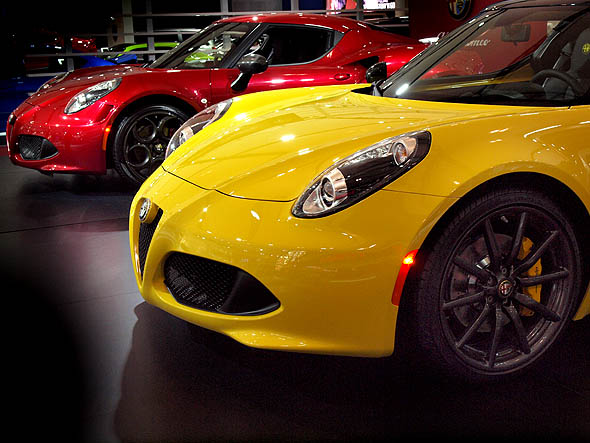 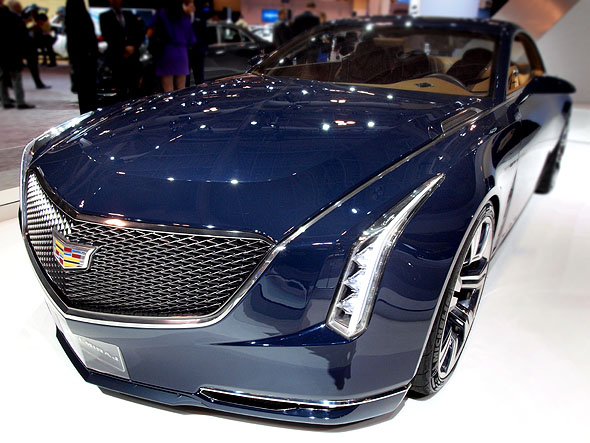 Cadillac is choosing a risky strategy in an attempt to compete with BMW and Mercedes Benz. While putting their breathtaking Elmiraj concept car on the showroom floor, they put their heads of brands and marketing onstage to introduce the new ATS-V and CTS-V models. These are the two-door and four-door flagship Cadillacs that the company is hoping to sell to millennials. 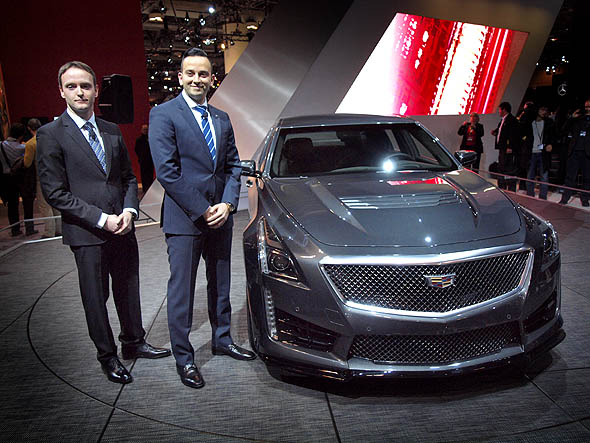 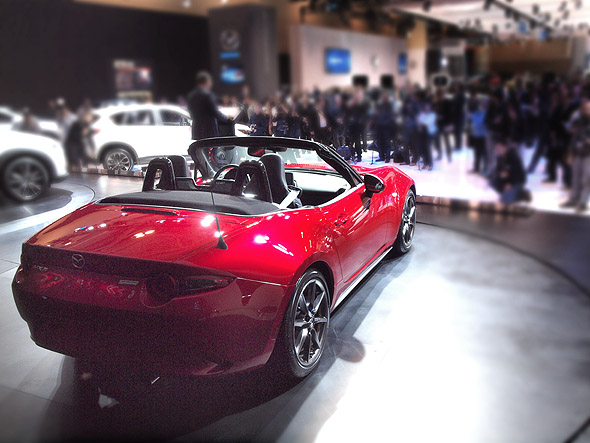 Mazda introduced their new MX-5 to an assembled press that will always be happy to write about the greatest affordable sports car to hit the road since the MGB. 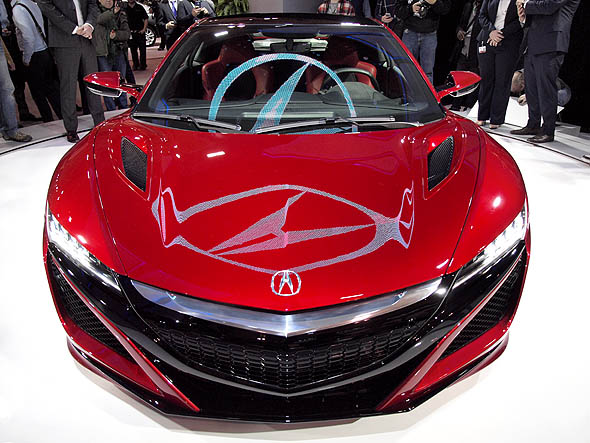 On the other end of the sports car market, Acura finally stopped teasing us with endless concepts and prototypes and brought out the new NSX, a super car with a hybrid power-train that they saved for the end of the day. Maybe you'll see one in Yorkville one of these days. 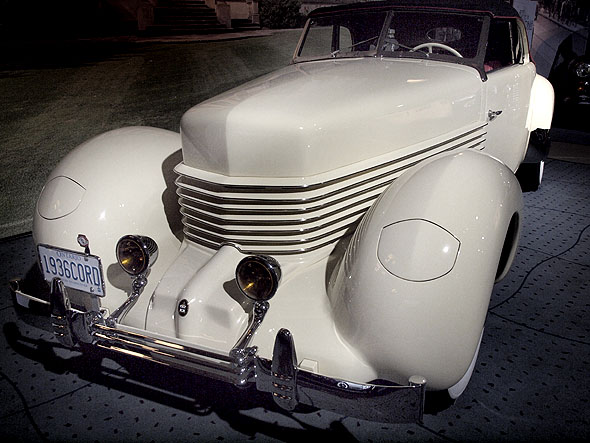 The basement of the convention centre's was reserved for the auto show die-hards. The Cruise Nationals were bumped from the south building this year to make way for The Art of the Automobile, a showcase of concourse quality vintage autos set up in front of mural-sized blow-ups of Toronto scenes. One of the show's co-sponsors is Murdoch Mysteries.

It's sort of a greatest hits of car designs, and features a Bugatti, Auburn, Stutz and a Delahaye. You'll also find concept cars like the Chrysler Turbine, the Cadillac Cyclone, a Mustang prototype, the Atomic Age tail fins of the '59 Cadillac Eldorado, and that art deco marvel, the Cord Phaeton, there. 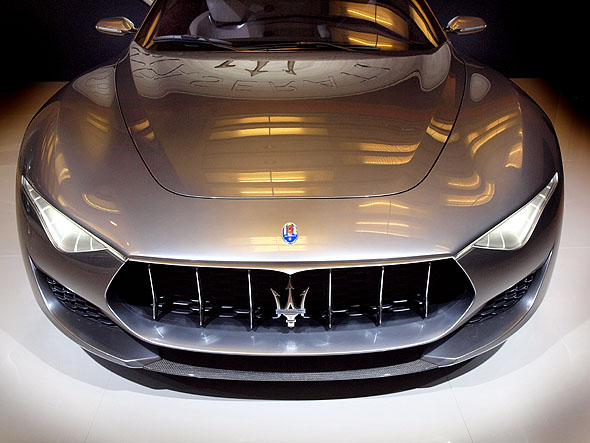 The basement of the north building is home once again to Auto Exotica, where luxury auto importers show off the Ferraris, McLarens, Bentleys, Lambos and Aston Martins that we drive in our dreams. Pride of place was given to Maserati's new Alfieri concept, which is just two years from actual production and will hopefully let the Italian automaker compete with Porsche's evergreen 911. For those of us grateful to anyone willing to take a few 911s off the road, it looked very nice.