A guide to pool hopping in Toronto

This summer has been a total bust for heat lovers. Last year, the City of Toronto issued 13 official heat-related alerts, six of which resulted in pool hours being extended into the night. This year, there have been no alerts, and no officially approved late night swims. Just five days remain before the pools close on Aug. 31.

For dedicated pool hoppers, mild weather, chain link fences, and padlocked gates are no obstacle to an illicit dip. It might be against the law for swimmers to break into Toronto's 58 outdoor pools (you've been warned), but the practice is relatively widespread, particularly at Christie Pits. 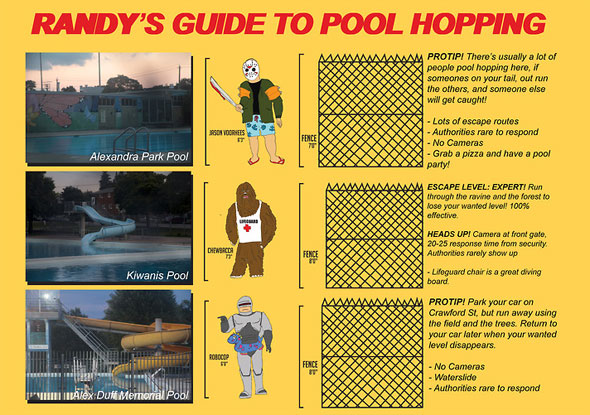 With that in mind, dedicated hopper Randy ("Just Randy. Like Cher," he says) has assembled a graphical guide to pool hopping at Alexandra Park, Christie Pits Park, and Stan Wadlow park at Woodbine and O'Connor. It includes the height and location of fences and recommended escape routes, information which is sure to draw the ire of authorities.

"This guide is the result of wanting to share what we learned with others who might be intimidated by these late night adventures," he says. "These specific pools ... were chosen because of their ease of entry, escape, and enjoyability ... there's nothing better than playing sports with friends then taking a dip afterwards to cool down on a summer night."

Randy says he's distributing the posters near city pools for people who want to "scratch off pool hopping from their bucket list."

Something tells me the ad campaign won't last long.

This gym in Mississauga has decided to stay open during lockdown

Saks Fifth Avenue is removing fur from all its Toronto stores