Rain makes for historic racing at the 2014 Honda Indy

Motorsports fans who turned out to Toronto's only race event this past weekend were in for frustration or excitement, depending on which day they attended. The weather - provided by our wet summer - took a hand in Indycar's "Two in T.O." Honda Indy weekend and managed to create some history by forcing organizers to run the only double-header the series has ever run after skies opened up on Saturday's race and brought out a permanent red flag. 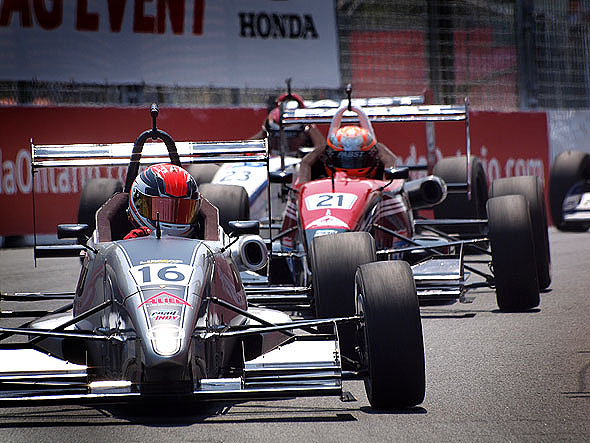 They were joined this year by an even more junior series, F1600, that brought over two dozen cars to the track, in a range of sizes and shapes now banished from the bigger series, some of which brought to mind race cars from long before the age of turbos, computer-designed aerodynamics and "push to pass." 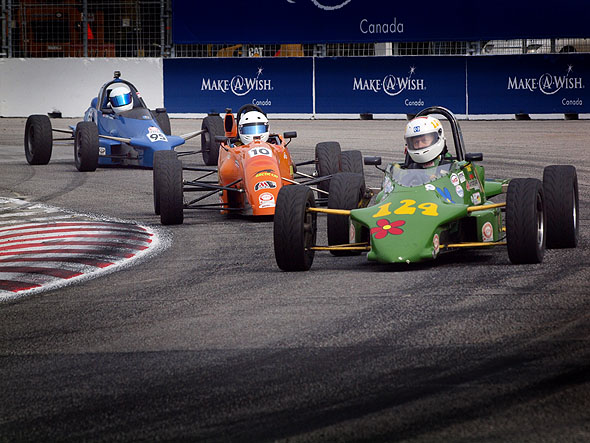 They raced around the track on their skinny tires and long suspension struts, nowhere near as fast as the headline series but with an eager agility that cars capable of over 200 mph can't risk. On the other end of the scale were Porsche GT and Pirelli World Challenge, two pro-am series featuring sports cars, muscle cars, luxury sedans and super cars stripped out and tuned up to run at ferocious speeds, many of which are the very expensive hobbies of very rich men. 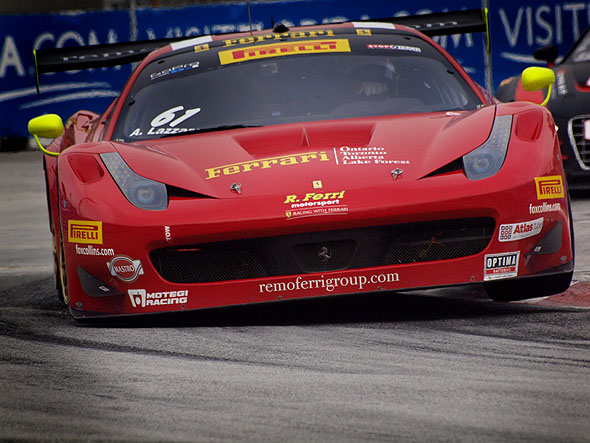 The Pirelli series was a particular crowd pleaser, filled with Mustangs, Lambos, Ferraris, Audis and even a couple of Kias, painted in colour schemes that ranged from restrained to gaudy, driving in a dense pack that sometimes didn't make it through the turns intact. A pair of Cadillacs announced their presence before they could be seen with a howling engine noise that could be felt from your chest to your fillings, but the prettiest car by far was the GT Class-winning Dodge Viper raced by Montreal's Kuno Wittmer. In bright red with two wide white stripes running down the hood, it proved when it comes to race car liveries, you can't beat the classics. 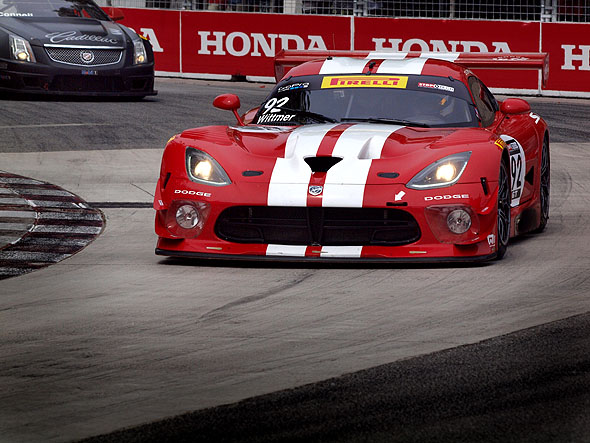 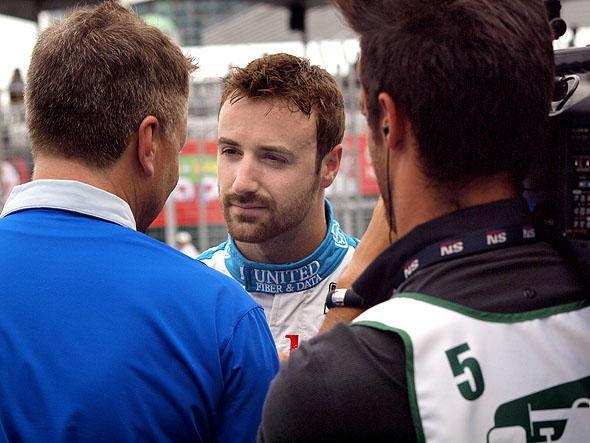 It's hard not to feel sorry for James Hinchcliffe. He arrives in Toronto every year in a barrage of publicity that obliges the Oakville native to get a podium, if not a win, at his hometown race, but it hasn't worked out quite that way yet. He ended the first race in eighth place, and at the end of race two he was down in eighteenth, thanks to getting stuck in a pile-up of cars at turn three near the end of that race.

He arrived here with a new sponsor - United Fibre & Data - who supplied Hinchcliffe's team with a quartet of grid girls dressed in midriff-baring outfits and armed with a t-shirt gun, so it wasn't as if he could make his way through the weekend discreetly. 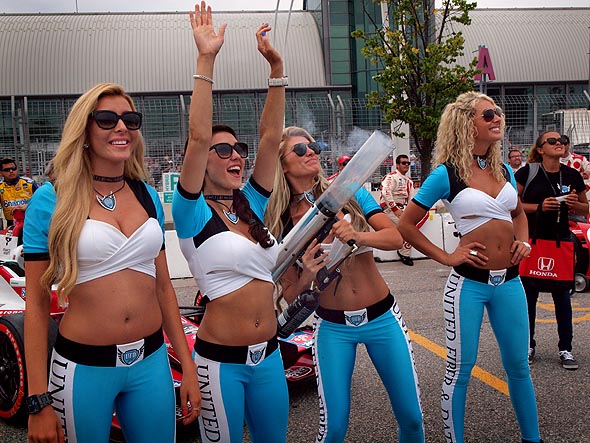 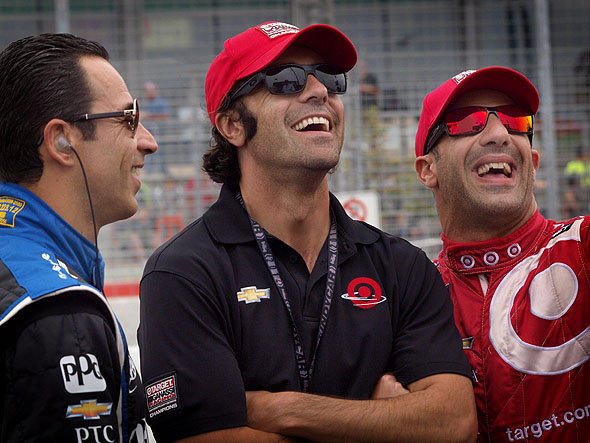 Three time Indianapolis 500 winner and four time Indy champ Dario Franchitti could be seen on the grid out of his driver suit and in a support role, having abruptly retired from racing last year after a massive crash put him on doctor's warnings.

He spent the race coaching the drivers for the Chip Ganassi team, especially Tony Kanaan, who took his seat in one of the Target-liveried cars this year. The two red Target cars have always been standouts on the track, but this year they increased their profile even more by dressing their pit crews in the most striking fire suits on pit row. 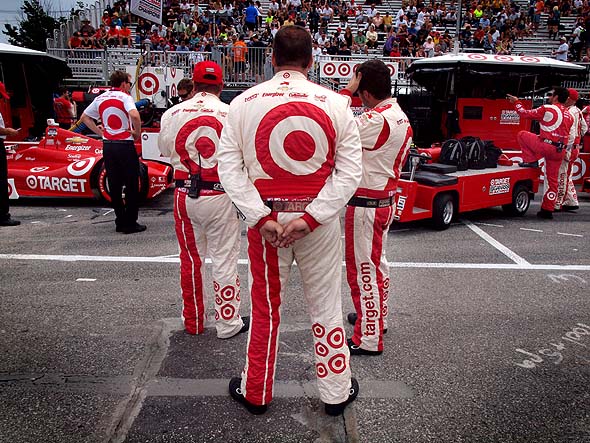 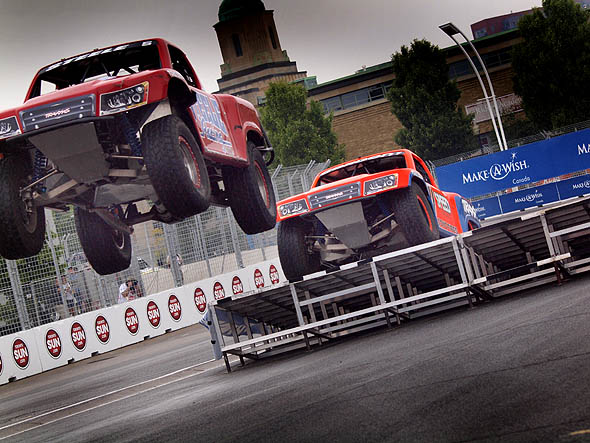 Robby Gordon also returned to Toronto with his Stadium Super Trucks series, to the same crowd-pleasing effect as they did last year. Gordon's trucks, life-sized versions of the balloon-tired radio-controlled trucks sold by series sponsor Traxxas, roared around the circuit sliding into barriers and getting massive air as they went over ramps placed in front of the grandstands. It's a fantastically silly concept that brings monster truck rallies to the racetrack, but it's hard to deny how well it goes over. 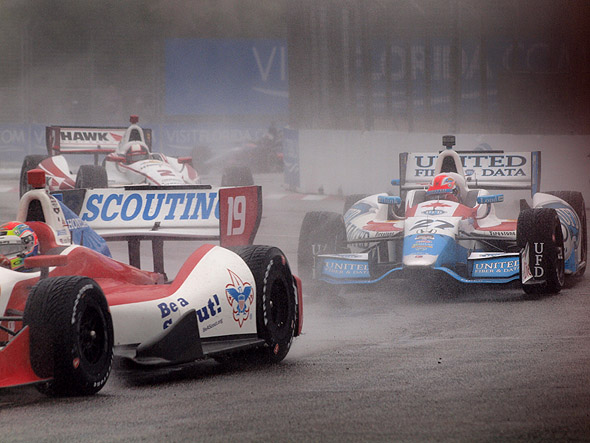 Saturday's race day, full of qualifying runs and races in the support series, ended on a bum note for Indycar when the clouds opened and drenched the track for two hours just before the race started. The cars ran a couple of sets of parade laps to see if they could manage the track, but with cars kicking up rooster tails of spray onto the visors of the drivers behind them, it was clear that visibility would be minimal and with the evening sky dimming, the race was called.

As the crowds left the Exhibition grounds, organizers announced that the next day would feature an unprecedented two races and that tickets for the first day would be honoured. Shortened to sixty-five laps or eighty minutes - whichever came first - the races would be run morning and afternoon, with the full card of support races in between. It would be a logistical nightmare but it made for two very eventful races. 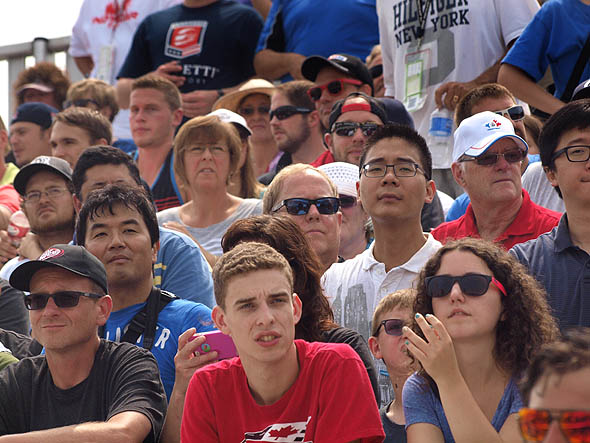 A crash on the first lap stopped the race, and further crashes took out four drivers, including Indy 500 winner Ryan Hunter-Reay, third in the points and the winner of the 2012 Toronto race. Sebastien Bourdais, who hadn't won a race in Indycar since he returned to the series in 2007, celebrated with his family in pit row after taking the race. What began as a ragged race became more sedate as drivers knew that they'd have to take the cars out again in just a few hours. 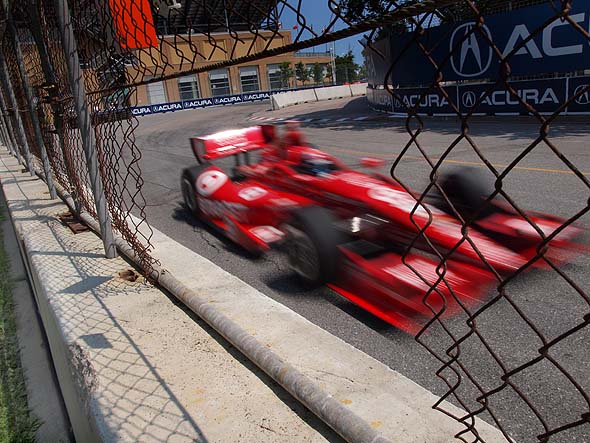 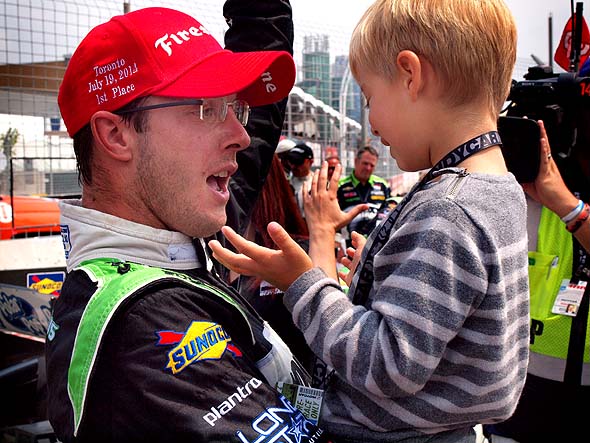 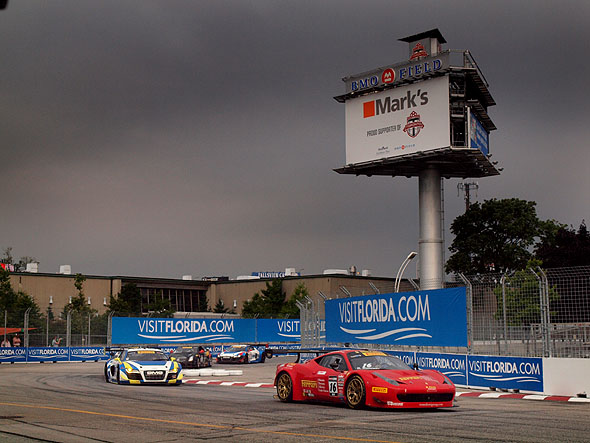 The skies turned slate gray as the Pirelli series ran their second race, and it looked like rain might spoil the weekend again. With points leader Helio Castroneves in pole position, the race set off and the rain began a dozen laps later. Drivers switched to rain tires but still started sliding off track and into barriers, and for the last minutes of the race first place kept switching as the track dried and drivers still on wet tires began falling behind. 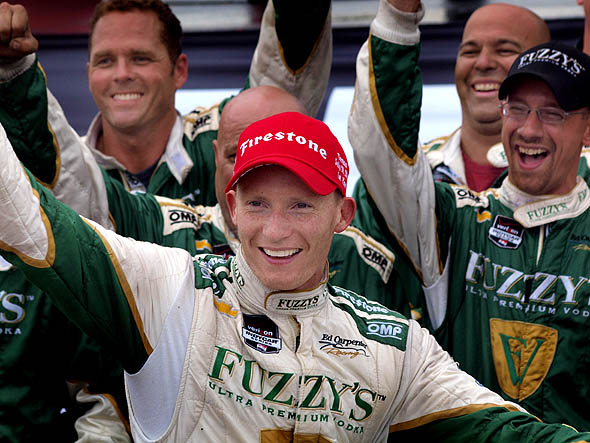 It was Mike Conway who ended up winning after starting in 11th place, a drive almost as impressive as Tony Kanaan, who was knocked into last place after misjudging turn three early in the race but drove through the hectic field to reach second place on the podium. It was a Cinderella moment for Conway, who has only won two other races since he started driving in Indycar in 2009. 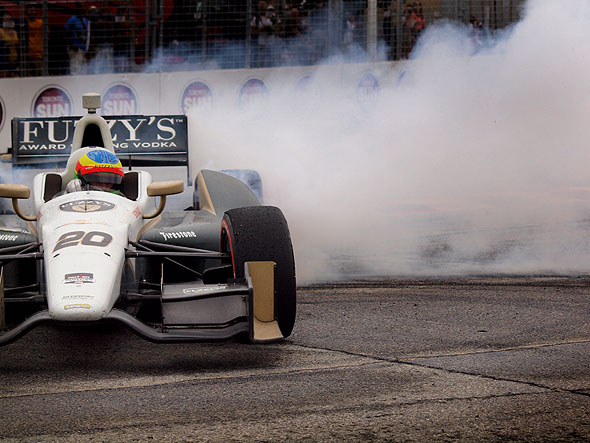 As Conway burned a smoky donut onto the asphalt by the Food Building, it was hard to deny that this sort of wild, ragged racing, with so many lead changes and battles all over the course, has become scarce in Formula 1, Indycar's upscale European cousin. One more reason for motorsport fans to hope that Indycar will continue to have a home in Toronto.