What's the best YMCA in Toronto?

The Toronto YMCA has come a long way since dropping the Young Men's Christian Association tags. The two Toronto downtown YMCAs - the Central YMCA at Yonge and Grosvenor, and the West End YMCA at College and Dovercourt - are inexpensive, unfussy fitness destinations, but lest you think that lack of gym-rat atmosphere means a lacklustre workout experience, both offer a gamut of workout options, from classes to rooms full of equipment.

Both downtown YMCA gyms have more than a few things in common. There are about 11,000 members at each, many of them kids, with child care amenities available. Both facilities are incredibly clean and well-maintained, and there's a strong community feeling in both locations. Like most gyms, they tend to get a little busier in the after-work hours, and the West End YMCA sees another rush of traffic in the workout rooms around 9 or 10am; even so, folks are pretty neighbourly about letting you in on the machines. (This is a community centre, after all). 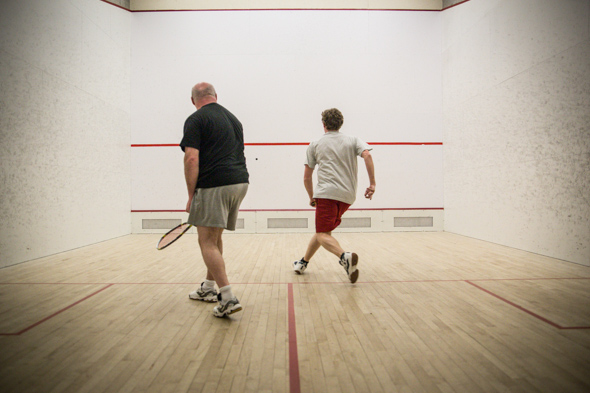 While it's definitely not a hard-and-fast rule, anecdotal evidence seems to suggest that the West End tends to host more families with kids, while the Central location gets a large influx of folks from the Village or downtown office workers. If that demographic breakdown (or simple geographic proximity) hasn't made a decision for you, here's a rundown on how the two locations stack up.

The West End YMCA has the historical advantage here: the location was built over 100 years ago, with its last renovation taking place in 2007. A few nifty historical details remain, including some stained-glass windows from the '40s. The Grosvenor location (the largest YMCA in Canada) is newer, but the peaked glass ceiling in the huge central staircase that spans the centre's four floors of facilities is striking (its 100 steps feature prominently in some workout classes), and the high ceilings in some of the yoga and barre studios add an element of peacefulness.

Advantage: The spacious feel of the Central location. 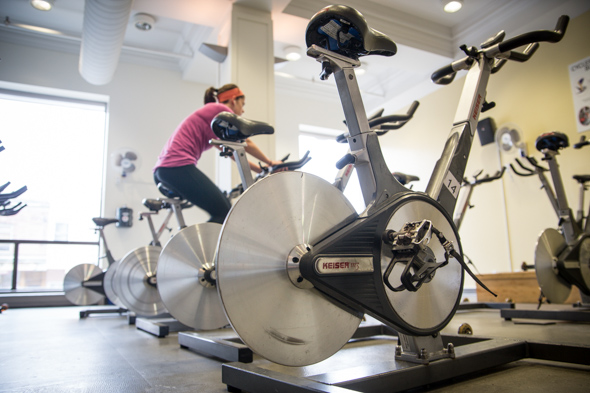 The general fee at each location is $58 per month, plus a $85 joining fee. (The signup cost includes the mY fitness program, which many might find bogus but nevertheless includes an introductory tour/meeting with a trainer to help you learn fitness options the gym offers and help you figure out how to reach your goals, with a follow-up visit in a few weeks.) The Central location also offers a plus membership tier at $99 a month, with a $120 joining rate, that allows you to access premium locker rooms.

Advantage: It's all about what you can afford. There's plenty of financial assistance available if you need the leg up.

Advantage: Central (if only for the extra weekend hours). 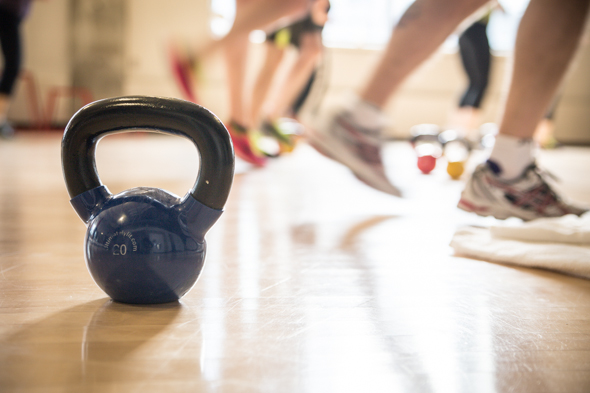 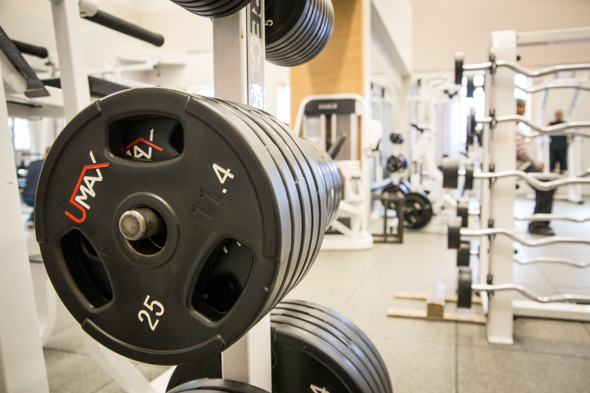 There's a solid variety of fitness machines spread out across a handful of different rooms at both locations, including cardio machines, free weights, and stations for interval training. (Both locations boast numerous treadmills and ellipticals with built-in cable TVs, for the easily bored.) For those who prefer a little space, the lower workout room at the West End location does feel a little more crowded at peak hours (though that may be due to all the pleasant sunshine streaming in). Both locations also have plenty of studio space, including squash courts available for member use.

Advantage: Both are solid. 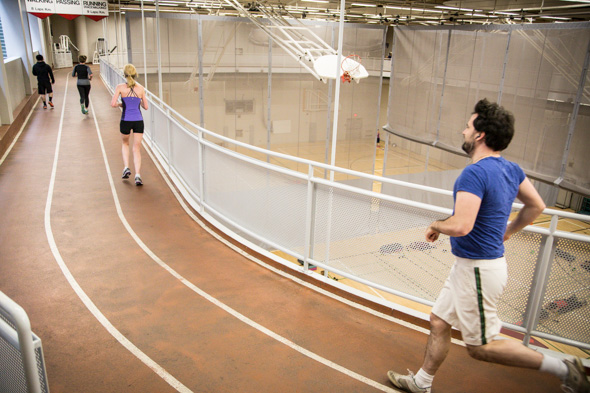 If you're just looking to go for a leisurely jog or stroll, both locations have an indoor track. The West End YMCA's course wraps around the workout facilities on the upper level - some members say it's awkward, but there's a lovely view of the southern tip of the city (including the CN Tower) from a few windows. Over on Grosvenor there's an awesome track suspended high above the gym, though it gets crowded during peak times.

Advantage: It's a toss-up.

There are separate locker rooms for adults and families at each location. The West End location's locker room facilities contain a whirlpool, steam room, and dry sauna, as well as small overnight lockers for ongoing rental, and pay-as-you-go towel rental ($2, or $20 a month for towel service). Things are a bit different at Central, which includes family locker areas (basic locker rooms available for everyone's use) and a members' only plus facility that features all of the above plus a private workout room with a few machines, a stretching area, and a lounge.

Advantage: The Central locker facilities are pretty swanky, but I like the fact that all of the West End members can access extra amenities. 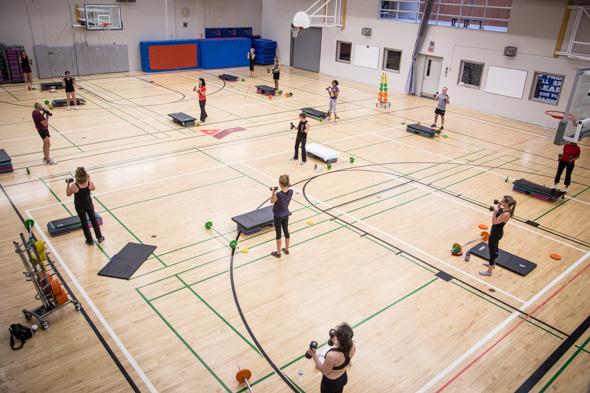 Both locations offer recreational and pick-up sports like basketball, volleyball and soccer for adults. The standout here is the Central Y's massive gym, which can be subdivided into four large sections (each one about the size of the West End gym) for different games and classes.

Personal training is available at both locations for an extra (but quite competitive) fee, and one-on-one and group training opportunities are available. The Central location also offers CardioCoach VO2 testing, body composition analysis, and other fitness assessments.

Advantage: Both are solid, unless you really want those extra metrics.

There's a lot and a Green P close by the Central location. As the Dovercourt YMCA caters mostly to folks who live within a 10-minute trip, they don't offer parking. What they do have is tons and tons of space for bikes: seven large racks, to be exact.

Advantage: All depends on how you get there. 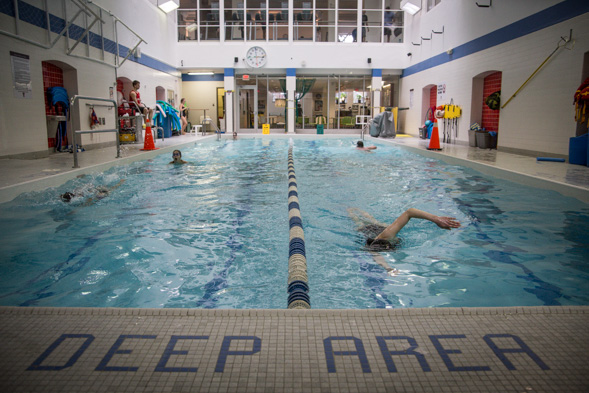 West-end staff admit their pool is relatively small (18.5 metres), but they make the most of it with a packed schedule split between rec/lane swimming, AquaFit classes, and swimming lessons. Over on Grosvenor, meanwhile, there's a training pool with a hydraulic floor that can go from 18 inches deep (for kids) to six feet, plus a large main pool; fitness classes (up to nine a day) are held in the training pool while the main one is open to lane swimming for most of the day. 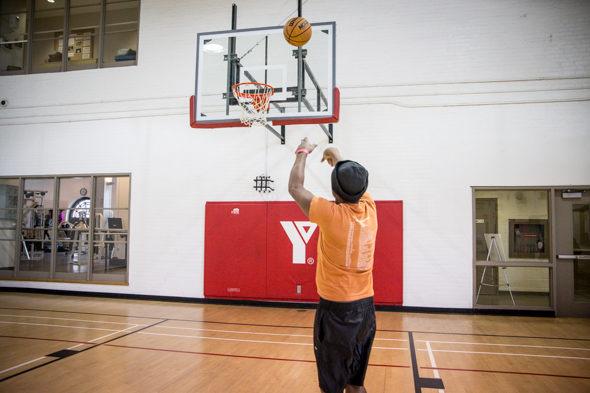 For sheer space and amenities, the Central location edges out the West End YMCA. But both locations are quite well-kept and well-stocked, with a packed schedule of activities, so they're evenly matched in most major respects. Depending on your interests and location within Toronto, the decision on which location to check out is a personal one. Either way, it's fun to sweat at the YMCA. (You didn't think you were getting out of here without one of those, did you?)