That time the Toronto St. Pats became the Maple Leafs

The Toronto Maple Leafs celebrated a birthday on Friday. It was 87 years ago this month that the team adopted the grammatically curious Maple Leafs name and donned the first jersey to bear a version of the iconic team logo.

That the Leafs exist at all is a tribute to Conn Smythe, who rescued the beleaguered NHL team from a possible move to Montreal or Philadelphia.

"The intention is to get the Toronto public interested in the team as much as possible and to make the team a Toronto aggregation with some home-town pride," The Toronto Star wrote of the move. "The new owners have the proper sporting spirit and are determined to get a team that will hold its own with the best in the league." 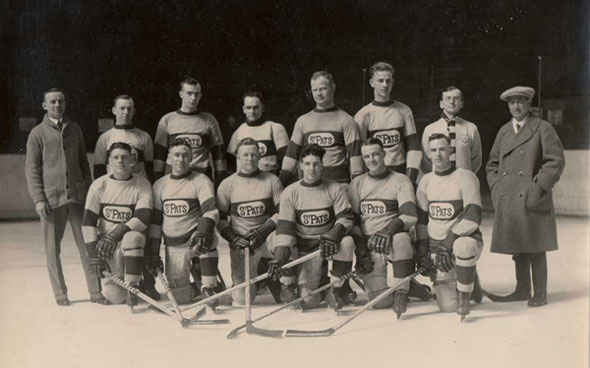 The years following the end of the first world war hadn't been kind to the Toronto Arenas, the precursor to the St. Patricks. In 1918, under manager Charlie Querrie, a legal dispute forced the sale of several star players, resulting in a five-win season that's still the worst in team history.

Querrie organized a group of investors and bought the team. In 1922, the newly named St. Patricks took the first ever NHL title but, bizarrely, did not have their name engraved on the Stanley Cup - it would have be added 25 years later in 1948. The brief success didn't last and a further legal dispute with a former owner forced Querrie to put the team up for sale again in 1927.

A group from Philadelphia bid $200,000 for the franchise, $40,000 more than the highest local offer, and looked set to claim the St. Pats. Luckily, Querrie was "loath to see the franchise and players leave Toronto" and a group of businessmen from Toronto led by Conn Smythe convinced him to sell to them instead.

"The name 'St. Pats' has been discarded and in the future it will be the 'Maple Leafs' of Toronto," the Star declared following the announcement of the sale on Valentines Day 1927. 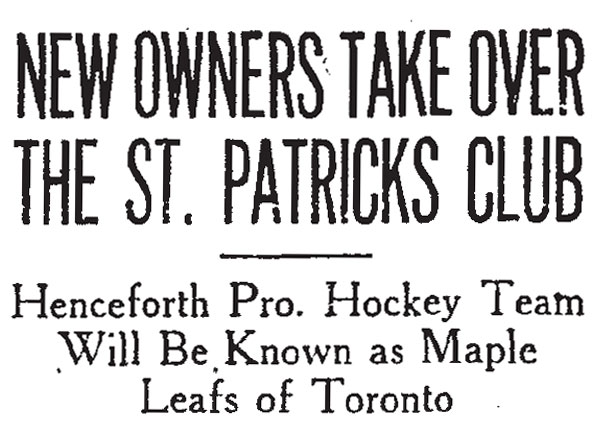 Toronto already had a Maple Leafs in the form of a Double-A baseball team that played out of a ball park at Bathurst and Lake Shore. Before that, the original Leafs had a stadium at Hanlan's Point, where a young Babe Ruth hit his first professional home run in 1914.

The origin of the Maple Leafs name, which at first glance seems like it should be "Maple Leaves," isn't entirely clear. The official story goes that the team was named for the Maple Leaf Regiment of the Canadian army, but there's some suggestion the title was a tribute to yet another Maple Leafs team for whom Conn Smythe worked as a scout.

In his book Centre Ice: The Smythe Family, the Gardens and the Toronto Maple Leafs Hockey Club, Smythe's grandson Thomas Stafford Smythe said the team was named for the insignia his grandfather, a decorated veteran, wore on his uniform during the war.

The Leafs beat the New York Rangers 4-1 in their first game, snapping a lengthy losing streak. "Has the jinx gone?" wrote sports writer Bob Hayes in the Star. "Last night's game was one of the best, if not the best, of the season."

The club wore a white jersey with a green logo for the remainder of the season, switching to the familiar blue and white in 1927-28.

The transformation was complete.