Tough Mudder and Spartan Race fans are increasing in number -- and they're looking for between-race training that's just as hardcore (and mud-filled) as the main event.

Enter the O Course which brings military-style obstacle course training to adventure racers -- and anyone else looking to deliver a shock to their fitness routine with a grueling, unusual workout.

"We can say confidently, we've started the one and only training like this in Toronto, if not Canada," says Ivan Ho, who co-created the course with Tony Austin, a former U.S. Marine Corps drill instructor.

The event is an offshoot of Fit Factory, the Yonge and Wellesley gym led by Ho and Austin. "The training here is based on military-style boot camp," the fast-talking Austin says between events. "This is the real-deal training. We don't play around."

The duo says the rise in popularity of extreme races like Spartan and Tough Mudder left a vacuum in terms of between-race conditioning.

"The last couple years, there's been such a buoyant demand for the adventure race industry," Ho says. "A lot of people go to these races, but they just don't know how to train for them. Our training's actually tougher than all those races." 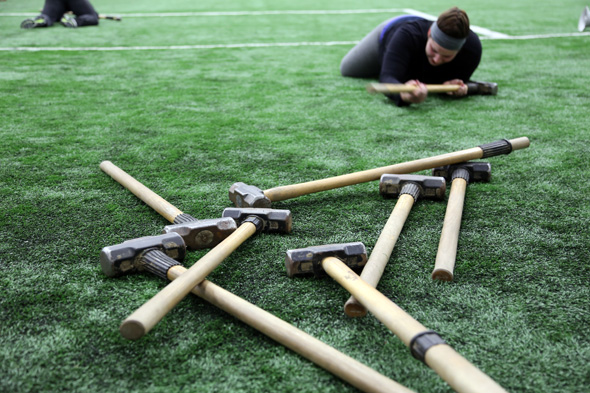 Ho is also quick to point out that the comprehensive, cardio-heavy training events appeal to a far broader demographic. "You've got the moms that come out wanting to challenge themselves. You've got the weekend warriors. You've got the people that just want to try something different. Athletes that are training for different sports that need something to spice up their routine."

The winter training courses are held in the relatively tame and tidy dome in Monarch Park near Danforth and Coxwell. When there's no snow on the ground, Austin says, the events are held at actual obstacle courses, with plenty of mud, sand and water.

He rattles off a rapid-fire list that paints a picture of what to expect: 10K or 15K runs, ropes, cargo bags, sandbags, backpacks, sledgehammers, tires, cinderblocks. 'You name it, we have it. It's all out in the mud, all in the environment. And that in itself, again, is designed to train and prepare for all of the adventure races."

This time around, the event begins with an hour-long warmup that runs the gamut from planks and crunches to group log lifts and sprints with a parachute. 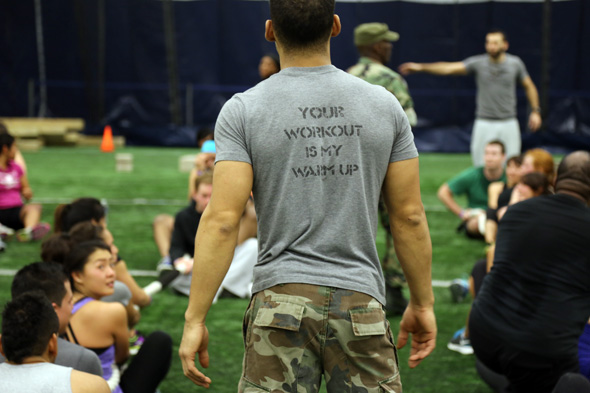 Next, there's a timed 10-obstacle course that include body weight exercises, squats with wooden beams, hops over spindles and tires -- and sprints while holding 25-pound ammo cases. "We put magazines in these ammo cans. Magazines, not like machine gun magazines," Ho laughs.

The event's military roots pop up again in the "sniper crawls," which involve crawling on your belly while bracing yourself on a 14-pound sledgehammer. "This one is all core. It looks easy, but there's actually a lot of core work, a lot of oblique work," Ho says.

Between events, participants run a lap around the Monarch Park dome. The participants are put into groups, but they eventually tend to break up as people complete the stations at their own pace.

Austin stalks the field in his fatigues and combat boots, barking out orders (or encouragement) through a megaphone and stopping to suggest tips for the stragglers. At one point he spots me standing by the edge of the field and bellows "Drop and gimme pushups, soldier!" through his megaphone. I dump my bag and tape recorder and oblige him. "You can't say no to him, right?" Ho cracks. 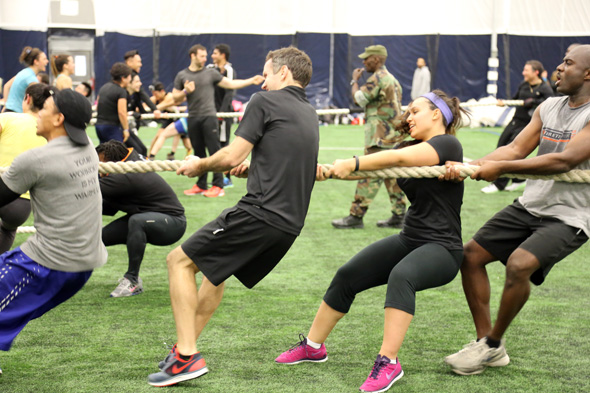 After everyone finishes their final laps around the gym, I assume the participants will be just about ready to collapse -- but Austin calls whoever's up to the challenge back to the middle of the field for a tug-o-war, and nearly everyone troops back over for a battle full of raucous yelling and laughter. You really can't say no to Tony.

The O Course costs $35 for a two-hour session. Check the web site for course dates.