You've probably seen posters or flyers for parties decorated with half-naked satyrs, cavemen, ghouls, superheroes, and even subversively-clad football jocks. If you're wondering what they're advertising, the answer is, quite accurately, Sodom. The city of Sodom was destroyed by God in the Old Testament for various reasons, most of them involving breaching certain laws of 'moral hygiene,' to put it lightly.

Radical journalist Mitchel Raphael is the founder and one of the driving creative forces behind the almost four-year running theme nights that incorporate drag shows, live performances, DJs, and debauchery. (See our previous style pics from various Sodom nights here and here). However, the theme nights only came into effect well into their first year, after noticing that their mixed 'all-inclusive' partygoers were hungry for a night that let them dress up, in a really big way.

Their next event is the Vampire Love Ball IV this Saturday, just in time for post-Valentine's Day raunchiness, where powerhouse diva Slimthick Monroe of the House Of Monroe Ballroom crew will be crowned the next queen. I talked to Raphael about drag shows, music, and what it takes to put on a really great party. 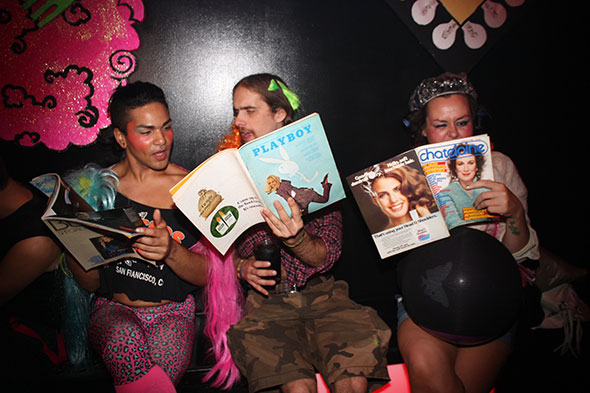 Starting in 2008, I had always wanted to do a party that was a good mix of people. Obviously, it's not for everybody, but it's a mix of true diversity with women, men, gay, straight, and trans Club 120 (formerly Goodhandy's, Club Rockit, and other incarnations) has a history of marginalized groups.

It was also used by DJ BlackCat, one of the founders of the gay urban party scene. They still use it for many of the Ballroom parties [Ballroom scene as in vogue], and they do the Trans nights, too. That place has been christened by so many different groups, so it was a logical thing. I also wanted to do something creative that highlighted Toronto's diversity. 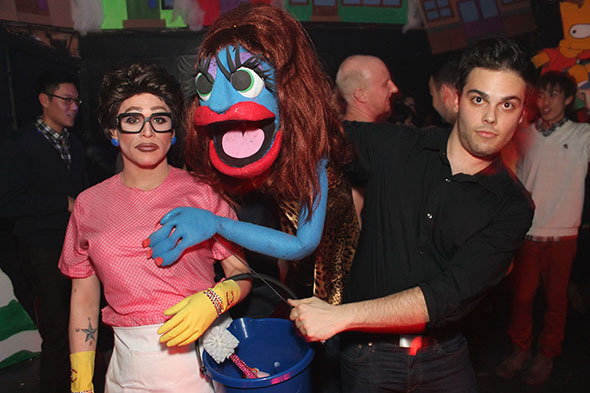 Some people create a party only to make a buck, because they think they can fill a void, or play a certain kind of music that people want, but Sodom does not make money. It's a labour of love but the pay-off is good. You meet people there that you wouldn't meet anywhere else. One of my friends came with a group who just wanted a standard night, but they ended up partying with a group of Japanese foreign exchange students.

Artists from the National Gallery like Kent Monkman have been there. Another artist that's shown up unexpectedly was Lady Starlight, a performance artist who has collaborated with Lady Gaga. Even members of parliament like Olivia Chow and Libby Davies have come. 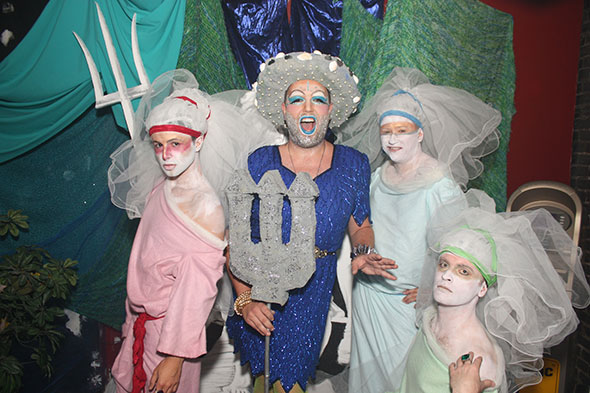 Was there any media backlash?

When you're a politician that has confidence in your identity and you believe what you believe, then you can do whatever you want. No one's going to question you if you have a track record of promoting the marginalized and creative classes of society; they would almost be hypocritical if they didn't come. But I'm always sensitive if someone ends up blowing that up in his or her face. 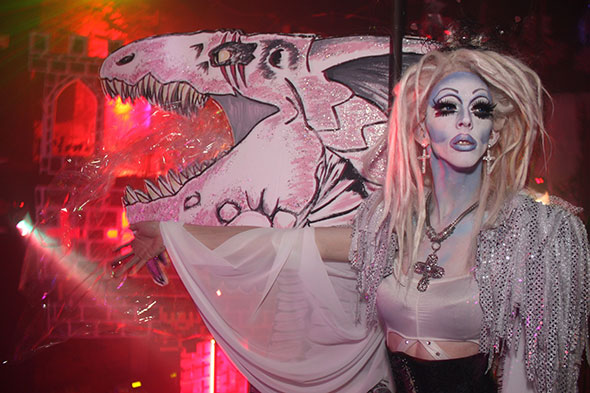 Well, you are the photographer.

Yeah, and these aren't stealth pictures from the side, I am clearly taking front-facing photos. Political people from all parties have been actually, like staffers to Tim Hudak, the Progressive Conservative leader.

I've always been of the belief that the stimulants to enhance your night out should be the mood and the atmosphere. You shouldn't have to walk into a club and have your first need be to get wasted or do a bump of something for a good time. I took that as a challenge. I thought we could do something to put people into a good mood, and get them excited from walking in, where the stimulants will be the experience. 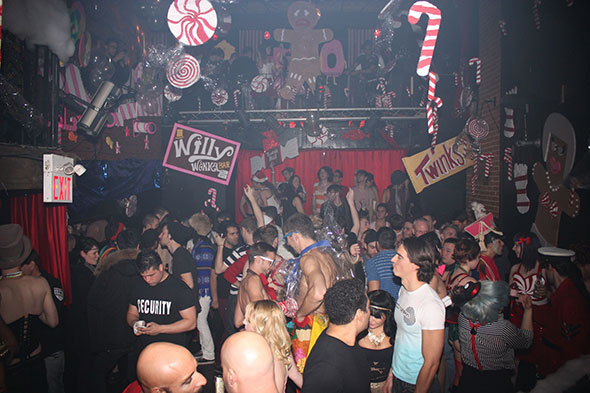 Who comes out aside from celebrities and art stars?

We have the regulars and a rotation of people that come for the different themes. We've had people come from weddings in full suits, but you could probably come dressed to any Sodom party in a Star Trek uniform and you'd fit right in, regardless of the theme. People like the challenge of dressing up to fit in with a concept. If you try to do the Warhol thing and invite people to come as 'something crazy,' they might freeze and do nothing. 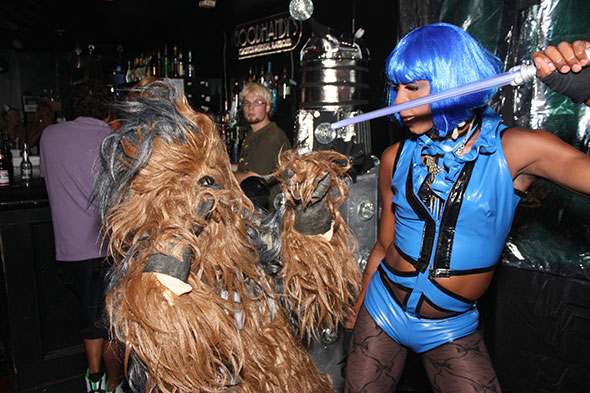 Tell me about some of your theme nights.

We originally didn't have themes. We just wanted a high-energy night with lots of dĂŠcor, that ended up getting bigger and bigger. In December 2009, we had our Naughty and Nice party where people dressed up with more holiday creations, and then we had an Angel party. We noticed that lots of people wanted to dress up, so we did the Vampire Love Ball 1, and that's when all the people came dressed up.

It wasn't just a goth crowd. It's for anyone who ever wanted to dress up like a vampire, but doesn't want a night filled with industrial music. It's for people who might want to hear Marilyn Manson, and wouldn't mind a Lady Gaga song or some Brit-pop, but with fangs and a full white face. There aren't a lot of nights that cater to that!

What was the original dĂŠcor for Sodom?

We built a sarcophagus that the dancers came out of, we had stuffed tigers, and we had this bust that was Lot's wife, the pillar of salt from the bible story. The funny part was that it became a fixture at the bar, and a good conversation piece. Not enough people knew the whole story of the city of Sodom being destroyed and the angel telling her not to look back, but she does, so she's turned into a pillar of salt. Which was also a great slogan for the club, "Don't Look Back!" 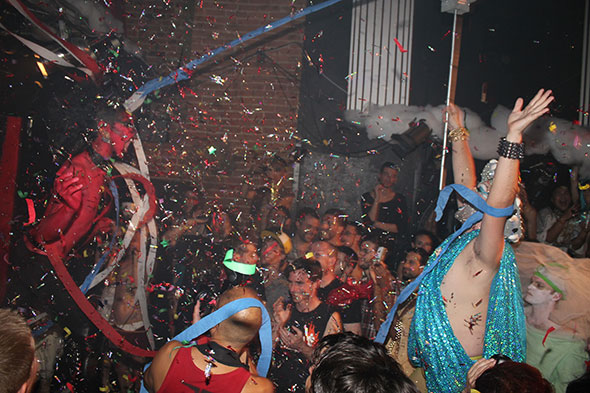 Tell me a bit about the name.

There was also a political motivation. Sodom is the last used 'code' to attack gay people, even though the city of Sodom was a 'mixed crowd', ha ha. You always hear 'fag' being used by the religious right, but once the word 'queer' became used in a TV show (Queer Eye For The Straight Guy), that term is kind of lost. If you're telling someone that you're going to Sodom, it still raises an eyebrow. It works on other levels, like let's say we had a Justin Bieber in Sodom night.

Does Bieber get played at your nights?

Yes, sometimes, and he's made some appearances in our drag shows like the Sodom Fairy Tales show we did. But you can guarantee that there will be a Nightwish song at Vampire Love Ball IV. The music has shifted. The biggest challenge for the DJs is that they need to prepare their sets based on what people might like to hear, but they also have to accommodate, so we are very good with catering to requests. But what people dressed as cavemen (Sodom Stone Age night) vs. what people dressed as vampires or princesses might like can be really different. That's a challenge.

They have to figure out where the night is going and toss some songs out there. That's why we've moved hip-hop more to the end of the night. But at Sodom TV Suburbia, a lot of people from the Ballroom scene showed up, so Blackcat just put Ballroom house beats on. When they take over the dance floor, it's not the moment to play Justin Bieber. We were initially going to play a very eclectic amount of music--mixing it up too much in the beginning with rock, hip-hop, house, (which to some, in theory, can sound amazing)--but a night that musically morphs with the crowd is generally a better night. 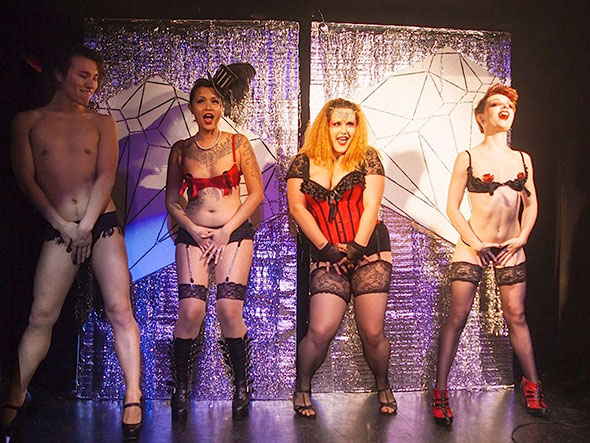 Can you tell me about some of the more popular themes and their interactive aspects?

The Vampire Love Ball, Superheroes and Villains, and cavemen themes have been very popular, so over the years, we repeat them with new angles. We did Sodom Stone Age in the summer, and all you can do is put a loincloth on to cover your breasts and junk with a bit of fur. We had a clay station with clay makeup for people. It stuck to you amazingly well when you were sweaty, but when it dried off you were covered in this clay powder and the whole club was covered in it. We were joking about how many people were going to wake up the next morning with clay all over themselves.

We've had performers like a fortune teller in the crowd at Sodom Olympus. At the Witches of Sodom party, transsexual artist Nina Arsenault took Japanese colour candles and dripped them on someone's chest as people watched. At the superhero party, we had artist Ricky Kruger do superhero paintings. Sometimes we have OCAD people do props, and then other volunteers will just paint everything one colour. 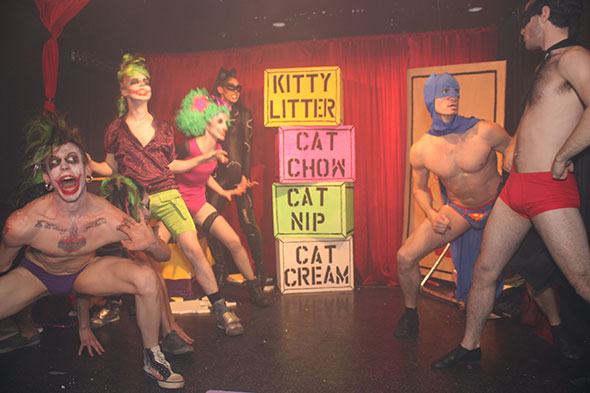 Do you incorporate drag shows at every event?

Yes, but at this point we can't even call them drag shows anymore. We have a whole team of people that build props and sets for weeks before the event. A lot of drag performers don't get that. They are more like theatrical productions. The Sodom TV Suburbia show had a whole cast of performers, but the only character in actual drag was Consuela, the maid from Family Guy. We're not Mirvish by any means, but in terms of classic, over the top, campy shows, we have lots of that.

The way we approach our shows is, if you're going to interrupt people grooving on the dance floor, then it better be for a good reason, and you better deliver something they feel happy about afterwards.

Drag shows or club performances have a reputation of being half-assed, like where the biggest highlight was when their wig fell off. Like, really? That's the highlight? I'd rather the reaction be "Oh my god, they had Consuela from Family Guy, and a 7.5 foot giant can of Lemon Pledge descend from the ceiling with confetti exploding from it." For me, it seems more fun to talk about than "oh, they slipped," or "they were too drunk."

The next Sodom party, Vampire Love Ball 4, goes down this Saturday night (February 16th) at Club 120.