Toronto Beermile turns beer and running into a sport

The Toronto Beermile aims to combine two great pastimes: drinking beer and running. Sound incongrous? It is (at least to my lightweight, workout-averse ears), but this underground phenomenon has organized chapters throughout the country, and even around the world. In fact, competitors from all around the globe regularly submit their finishing times to the grand poobah authority of the 'sport'--beermile.com. But it's not about getting drunk (although a sun-fueled buzz is nothing to scoff at); rather, it fosters a real sense of competitiveness.

The rules are fairly simple: drink a beer (standard sized and minimum 5% alcohol content), run a 1/4 mile, then continue until you've completed a full mile. Each beer must be drunk before the quarter mile is done. Oh, and of course, the whole thing is timed. 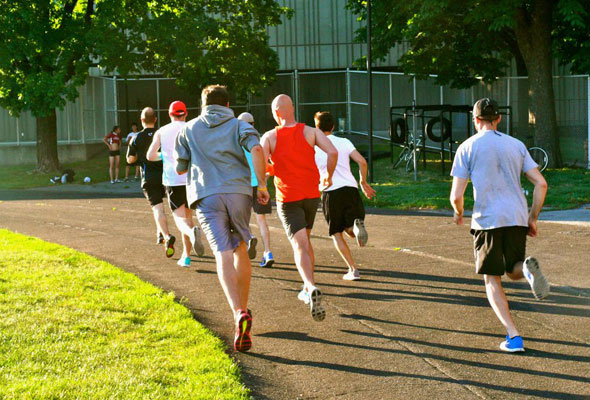 Brennan Harvey and fellow organizers Andrew Thuss and Mike Hassan all work in the advertising and entertainment industries (or thereabouts), and they pull from their contacts to gather sponsors and prizes. Harvey tells me that, thus far, they've been lax in enforcing the alcohol content rule, and even shrugged and slapped shoulders if a full 4 beers aren't drunk, but for their next event, they're getting serious. "We haven't yet submitted our times to beermile.com, but we'd like to for this next one."

Those who throw up--lightweights, those prone to motion sickness, and/or those who are not in the finest of shapes (i.e. me)--must complete a penalty lap. That rule, in particular, saddens me, and although the Toronto Beermile is not a stickler for rules, they've always observed that one.

Although the group has previously organized three races over the past year at venues such as the Riverdale track--mostly by culling from the organizers' other running groups--they've now officially launched a twitter account (a sure sign of professionalism). The original plan was quarterly runs, one per season, but their upcoming August 11th run will be their second this summer. 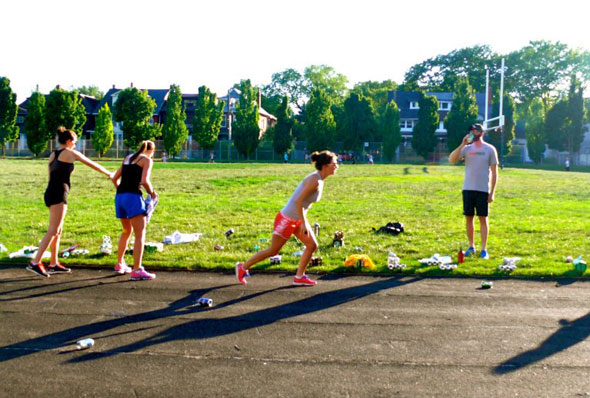 The turnout last time, at 5pm on a Saturday, was a hefty 60, with a broad age range, and unsurprisingly, the coppers even showed up. "They asked us what we were doing," Harvey says, "and we told them we were having a run. They laughed and went on their way." Harvey clarifies that they are aiming to get a liquor license or a venue moving forward, as they're in a rather grey area of the law right now, and if curious children wander in on them, they're quick to shut things down. "There's a moral element," Harvey tells me, "and we always clean up the area after we're done."

Sound good? Stay tuned to their Facebook page for their next event, RSVP and invite as many of your friends as you'd like. There's no cost (although Harvey is introducing a charity donation component in the form of a non-perishable food item) and the event is, of course, BYOB.