Woodbine Beach is Toronto's most popular spot along the lake

Woodbine Beach is undoubtedly the most popular beach in Toronto, and for good reason. 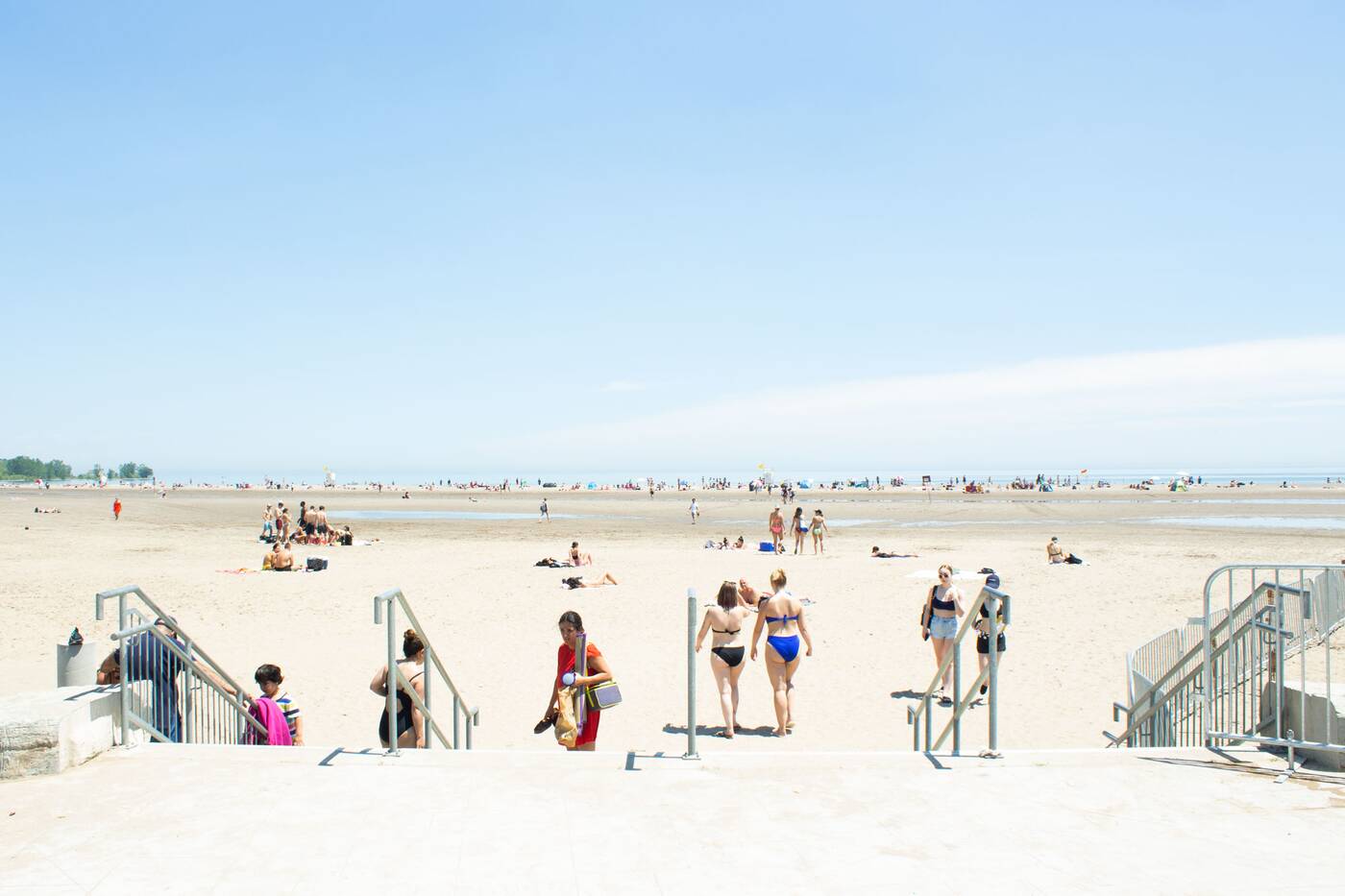 Woodbine Beach is the largest of the four beaches along the Lake Ontario waterfront.

Characterized by its rocky sand and a ribbon of smooth rocks just below the water, this beach is by no means a destination for a relaxing nap along the quiet shore. 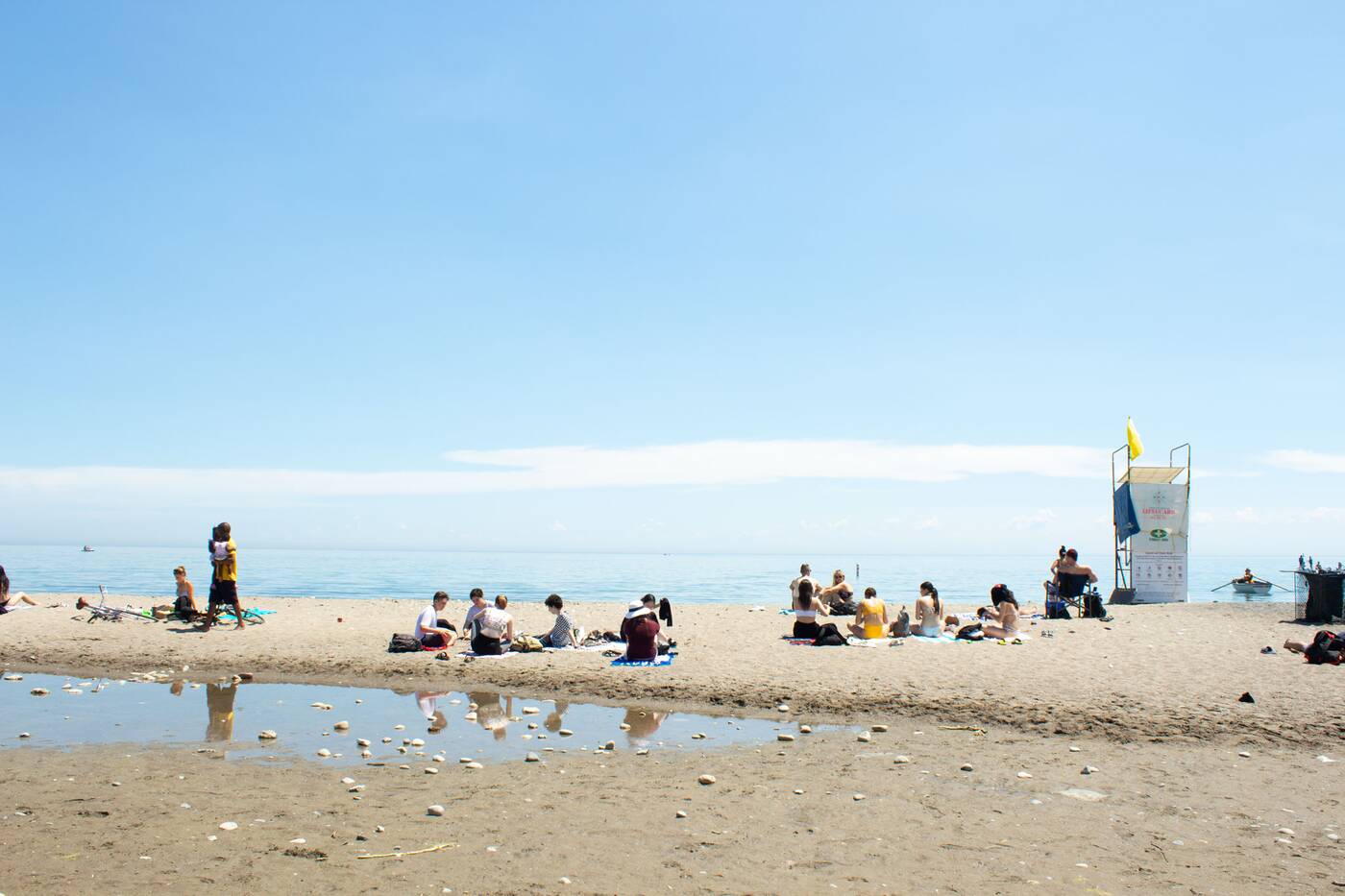 The beach's sand is rocky, with small puddles appearing closer to the shore.

Unlike the serene oases on the Toronto Islands, or the less-frequented beaches like Sunnyside or Cherry Beach, it’s a rowdier vibe here. 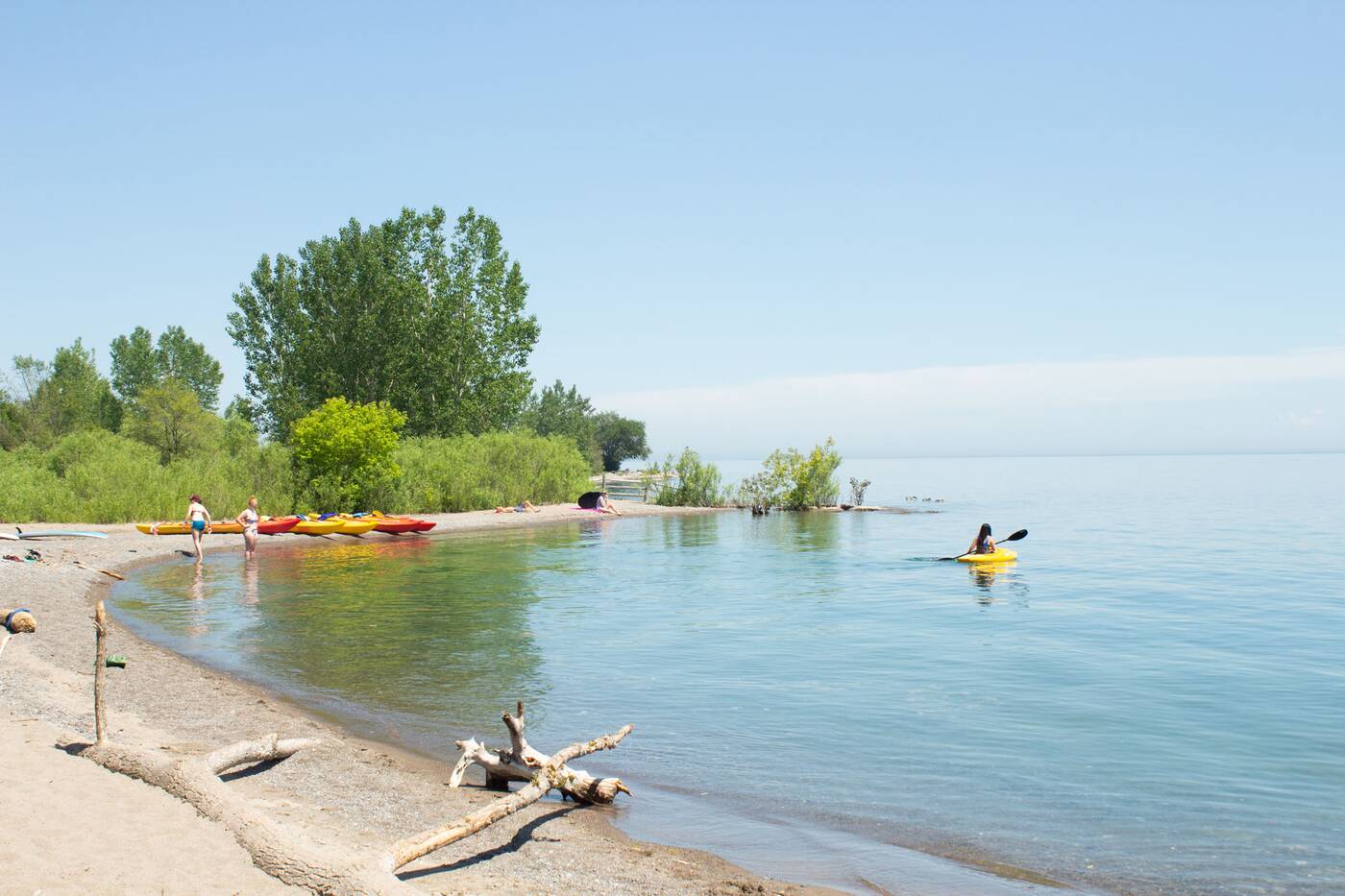 Water sport rentals are available at the eastern edge of the beach.

What was once an area nicknamed “The Cut”—a wooded area that was once home to a Toronto Island-style cottage community—has become a cultural landmark, of sorts. 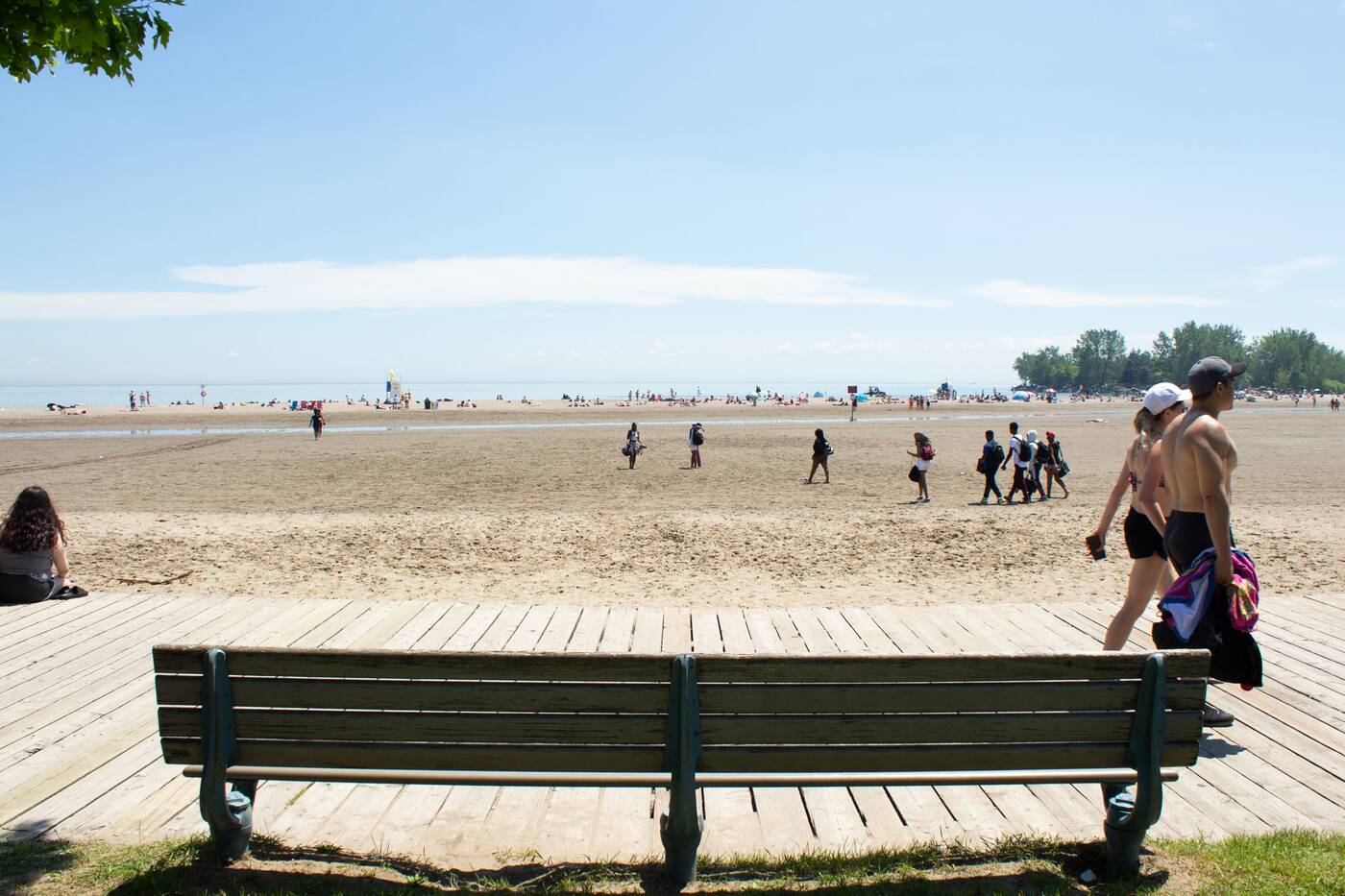 Woodbine sits along the Eastern Boardwalk.

Head here on special events like Victoria Day or Canada Day, and you’ll find Torontonians numbering in the thousands, flocking down to witness the annual fireworks that light up the water. 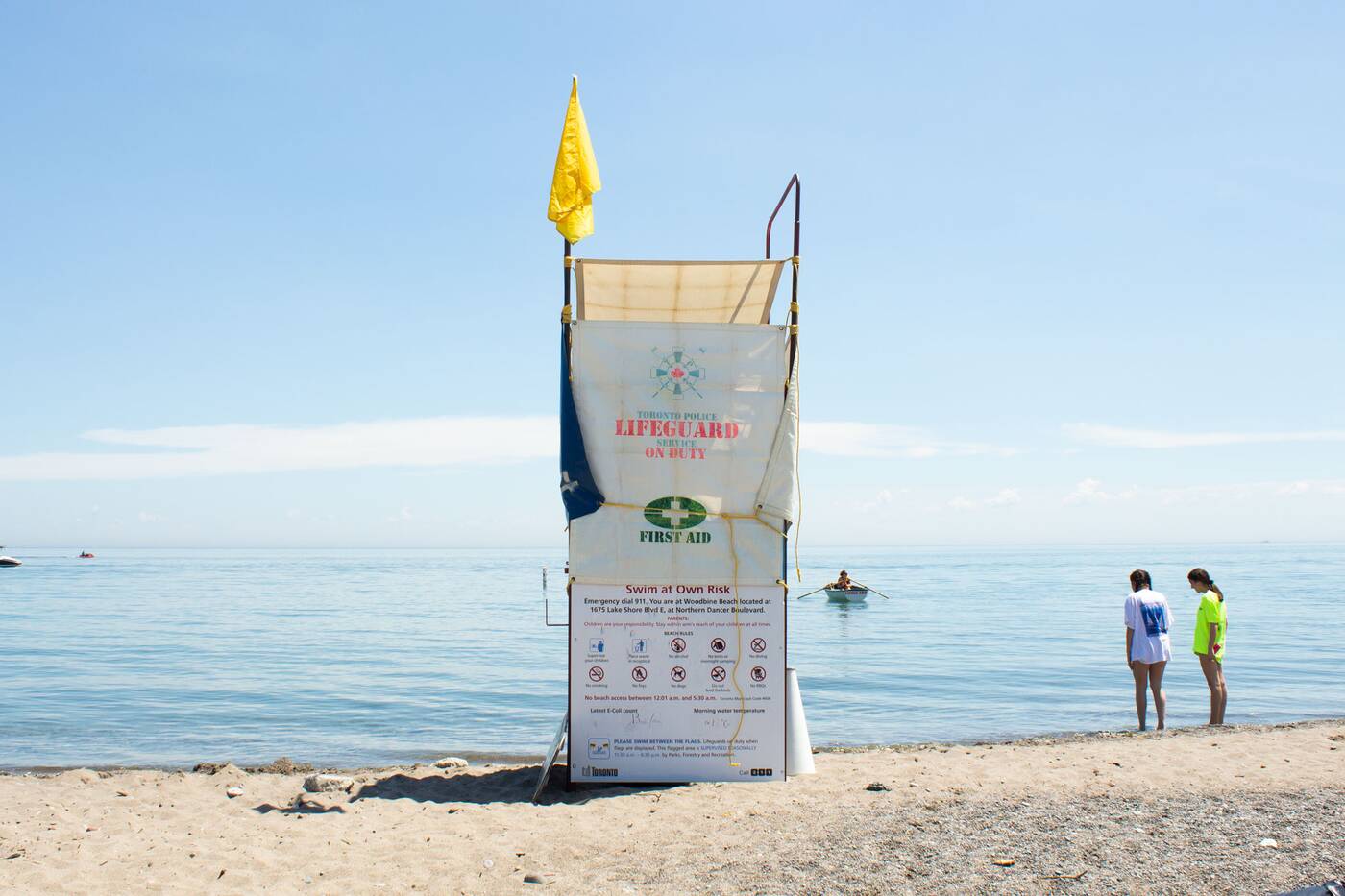 There are lifeguards present throughout the summer.

The beach sits at the foot of Woodbine Avenue, where storms, wind, and time have pulled sand from the face of the Scarborough Bluffs into the half-moon strip that is Ashbridges Bay Park. 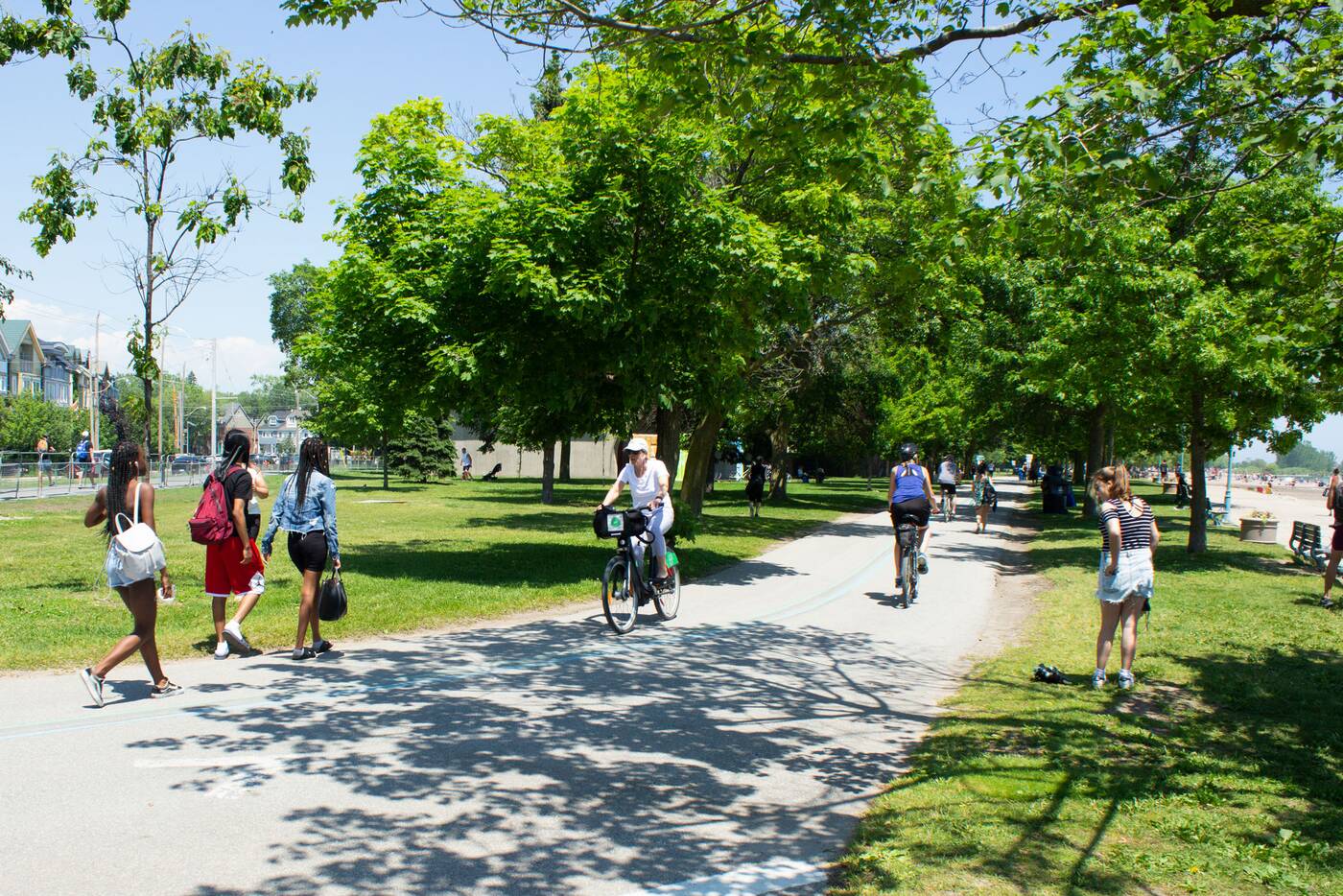 Many people use the Martin Goodman Trail to get around along the waterfront.

On any given summer weekend, expect the 92 Woodbine bus and the 501 Queen streetcar to be packed, and the parking lots at Ashbridges Bay Park fill up by 10 a.m.

This beach is also the gateway to three kilometres of glorious, sandy waterfront stretching eastward to the art deco palace that is the R.C. Harris Water Plant, with Kew-Balmy Beaches in between. 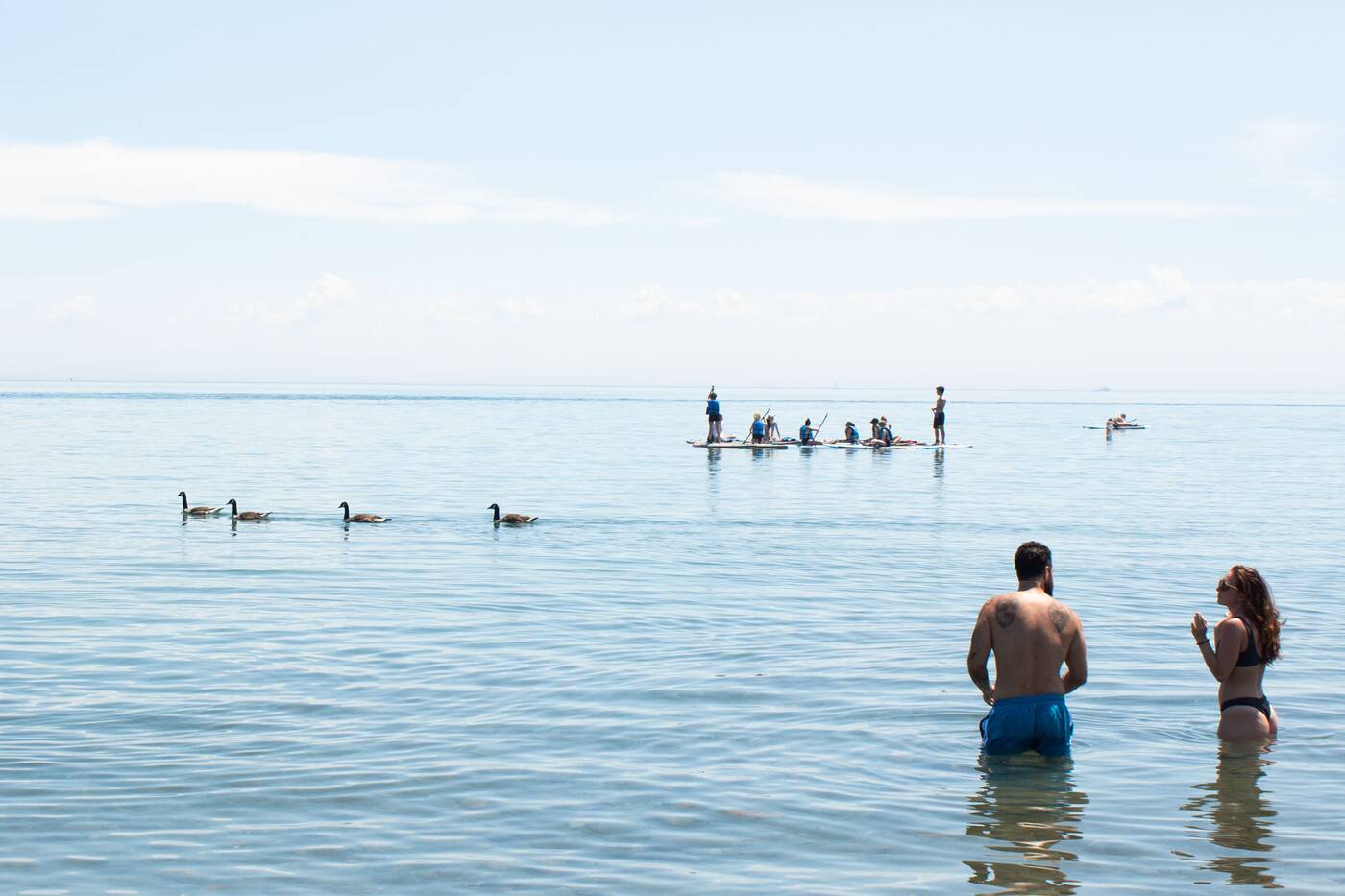 The water at Woodbine Beach proves to be Blue Flag certified year after year.

You can swim at Woodbine Beach, thanks to a consistent Blue Flag rating annually. Lifeguards man the entirety of the strip, sticking closely to their towers. 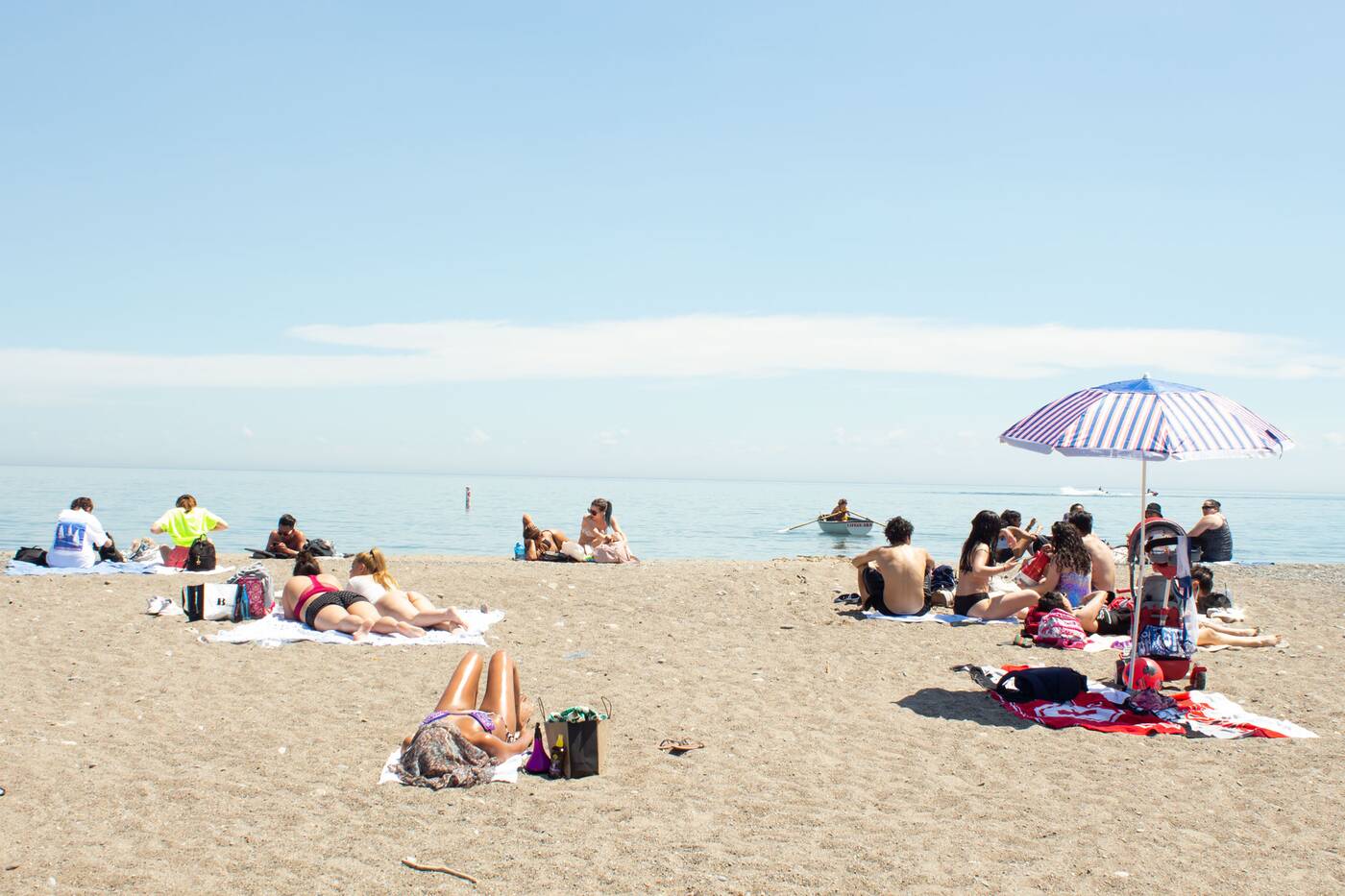 Woodbine is undoubtedly one of the most popular beaches in Toronto.

Swimming aside, the other major attractions here are the outdoor sports you can play at Woodbine, most notably, volleyball, played at the more than 90 beach volleyball courts that encompass the western chunk of Woodbine. 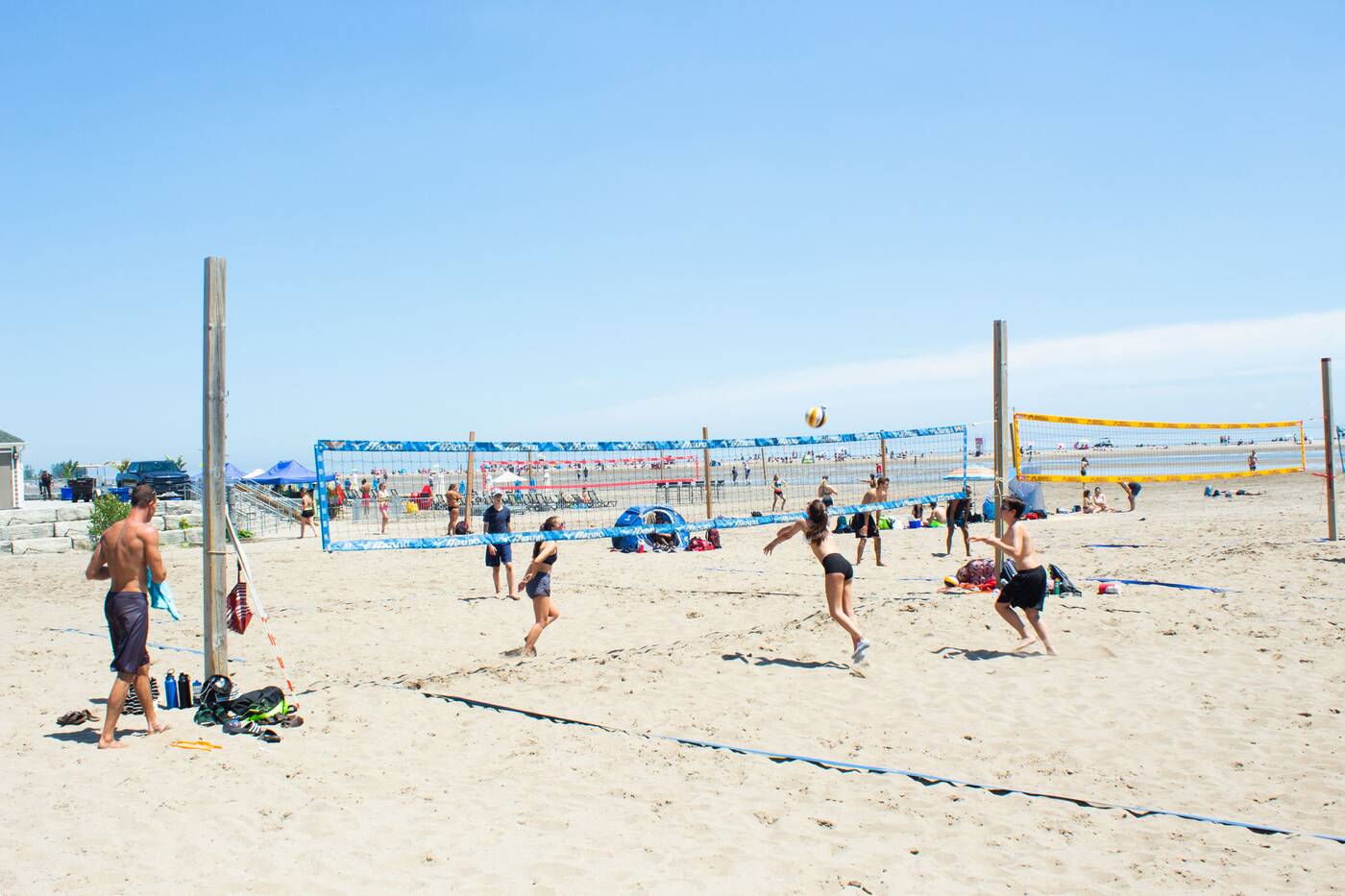 There are over 90 volleyball courts on the western side of the beach.

Most of these courts are owned by the Ontario Volleyball Association, though there are a handful which are designated for public use. Even without a membership, you likely won’t have too hard of a time scoring a court, if you get there early enough. 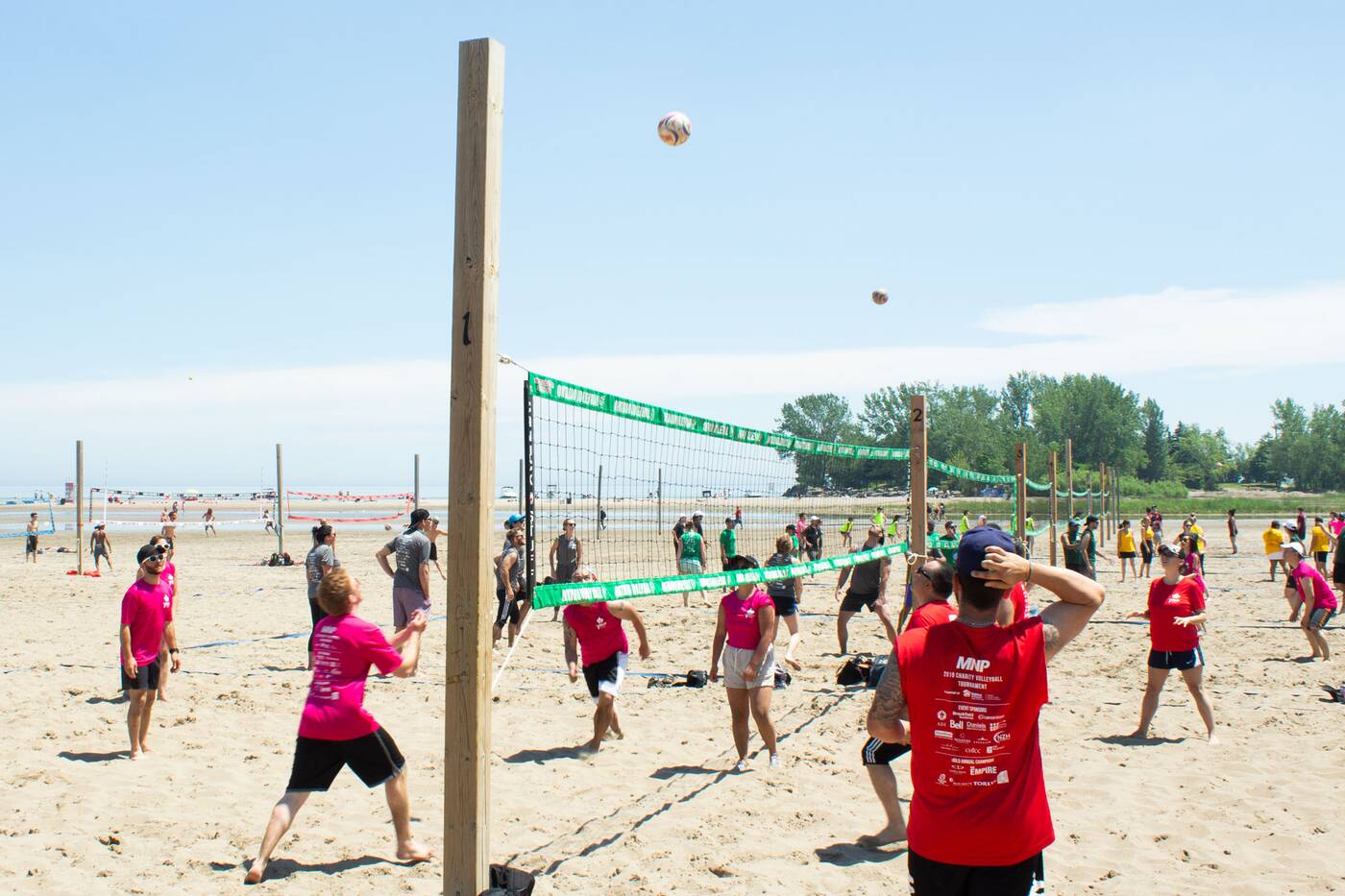 The public can play alongside games run by the Ontario Volleyball Association.

For the more adventurous, the Donald D. Summerville Outdoor Olympic Pool complex lets you dive from a five-metre board into the Olympic-size pool. Head to the most eastern limit of Woodbine and you’ll find canoes and SUP boards for rent. 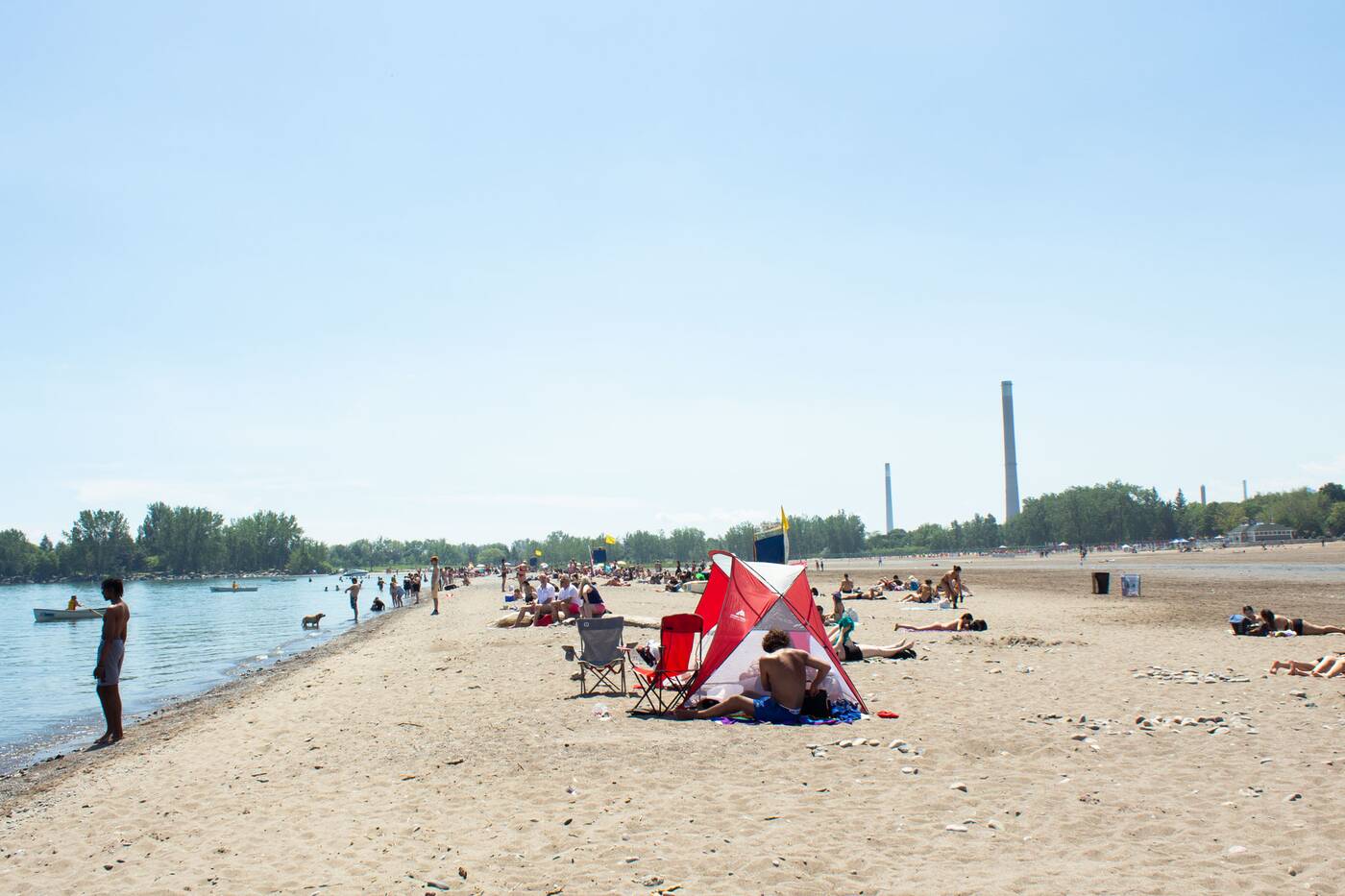 Woodbine is the entry point to three kilometres of beach stretching east to Kew-Balmy.

If there is a flaw in Woodbine Beach's shiny veneer, it's the periodic smell from the nearby sewage treatment plant. When the wind is blowing the wrong way, the big old plant makes its presence known with a scent that's anything but commensurate with the rest of the atmosphere.

It only happens once in a blue moon, though, so that shouldn’t deter you from a day in the sun. 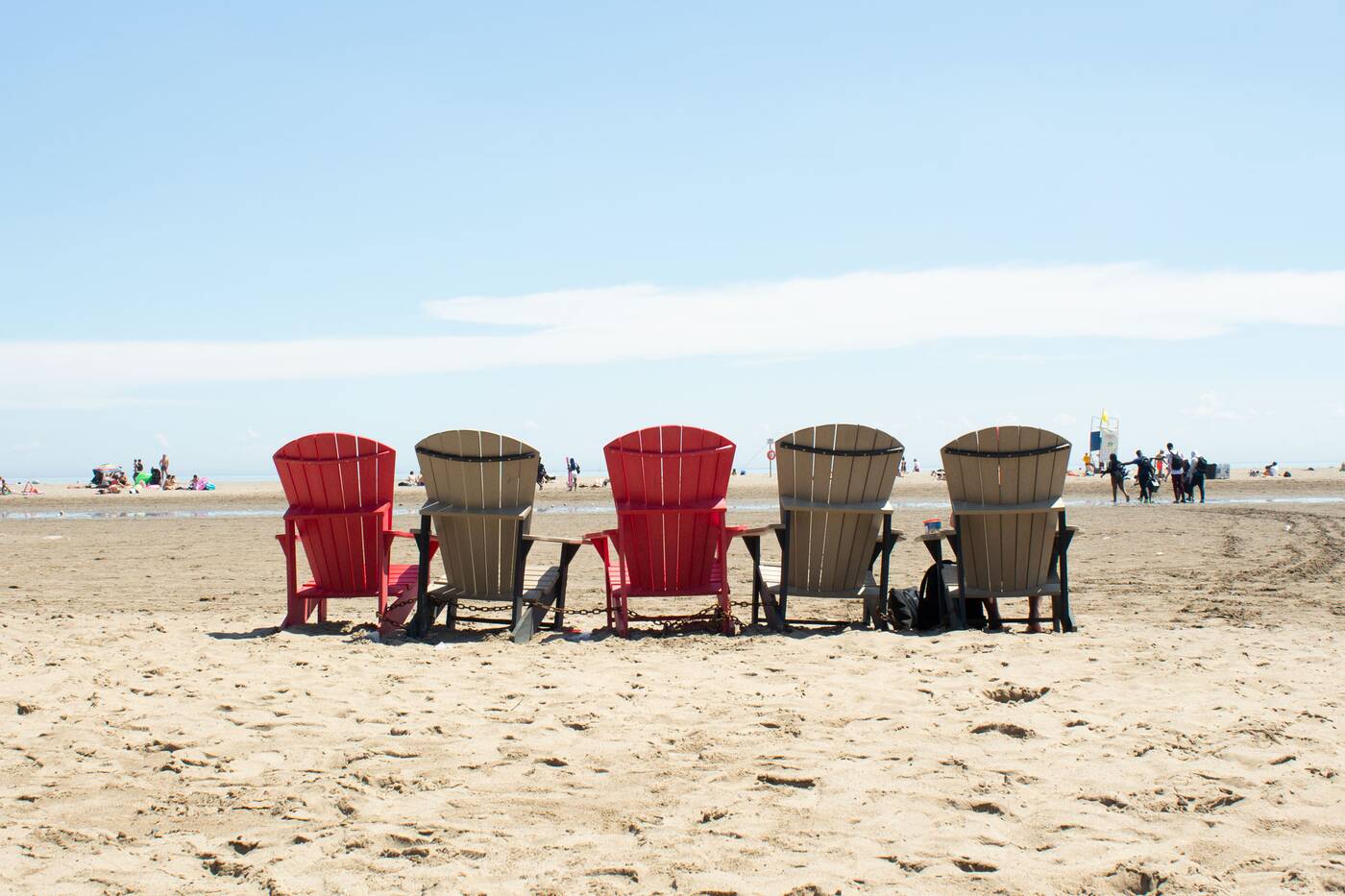