If the streets are banal reality, auto shows are a fantasy land where every car is unique, shiny and new, and the occasional auto is a true work of art. It's a thought you can't escape after you spend a day at the Canadian International Auto Show and head out onto streets filled with dusty, salt-sprayed cars in sensible shades of brown, blue and silver, the overwhelming majority of which are the dull quotidian types: compact sedans and hatchbacks, trucks and SUVs, with nary a supercar to be seen.

Media day at the CIAS saw the assembled car brands displaying their wares at the Metro Toronto Convention Centre struggle to show their best face - listening to the brief presentations given to the press pack being led around two huge rooms, it seemed like every auto maker had their best year ever, as they massaged sales figures, statistics and awards to accentuate the high notes. The exceptions were notable, from Honda's spokesman admitting that 2011 was "a tough year," to a GM presentation cautiously talking up a good fourth quarter and Chrysler proudly stating that they'd paid back their government loans.

Then there was Hyundai's rep laying on talk of gratitude, humility and struggle, which probably came out easier after that morning's announcement that their Elantra had won the Canadian Car of the Year award, which would be nice if the Elantra wasn't precisely the sort of utterly average car that makes the streets outside the auto show seem like East Berlin when you could only get your Lada in oatmeal or beige after signing on to the ten-year waiting list. 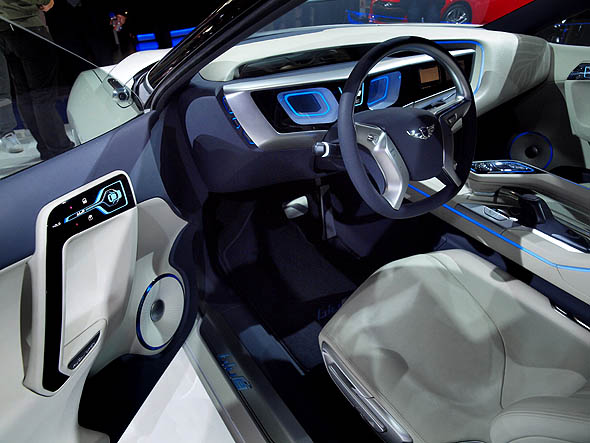 It didn't help that many of the concept cars unveiled at this year's CIAS were stunning, including Hyundai's own BlueÂ˛ model, built to showcase their hydrogen fuel cell powertrain, and equipped with a futuristic dash and interior the looks like something from the recent Tron sequel. Like most alternative fuel technologies, hydrogen still has a lot of hurdles to jump before it shows up in any subdivision garages, and it'll be a long time before the interior of your airport rental looks this nice, but the promise of this sort of technological and aesthetic leap has the general effect of making so much of what you can buy today look, well, tedious.

Which isn't to say that every concept car was a breathtaking shot of future envy. Honda's Accord concept, the centrepiece of their display, would probably only startle you if you'd never seen big rims or a candy apple red paint job, while the most noteworthy thing about Lincoln's MK7 concept was a panoramic glass roof that would never make it to production. The MK7 also sports a striking front grille that suggests that Ford, finally, has realized that their luxury brand will never beat Cadillac by being duller than GM's land yacht maker. 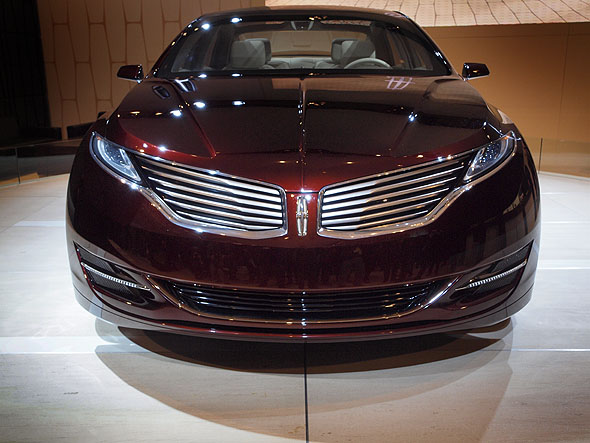 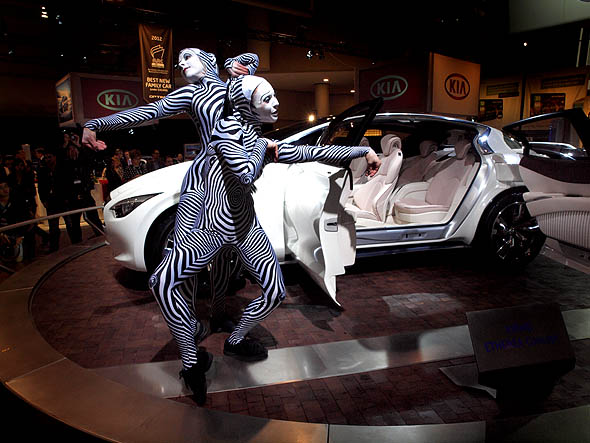 The best thing about Infiniti's Etherea concept was probably its rear suicide doors - another detail unlikely to make it to production - but it was hard to focus on the Etherea thanks to the Cirque du Soleil acrobats hired to pose around it during the media presentation. VW's Bulli concept van is a tribute to their iconic '60s microbus, and while being presented as a 6-seater EV with an impressive 300km range, was put on the show floor to draw consumer feedback, with the possibility of selling it with a range of powertrains, which might potentially include hybrid or VW's clean diesel. It's also nice to see that at least one automaker intends to court the much-overlooked jam band market. 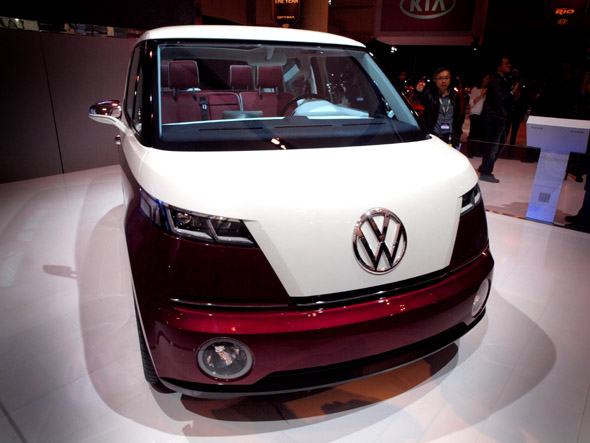 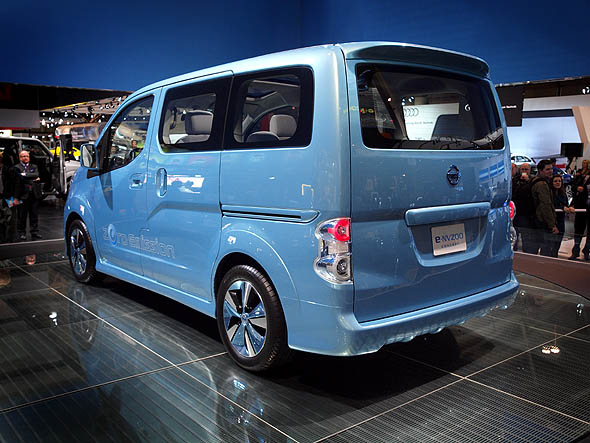 Greened-up auto technology was offered by almost every major manufacturer with the exception of Mazda, who conspicuously doubled down on their commitment to improving internal combustion engines. Nissan gave pride of place in their display to an electric version of their NV200 van, while Mercedes-Benz showed off their battery-powered Smart ForTwo, which will apparently come with their new eBike, like the treat in a CrackerJack box. 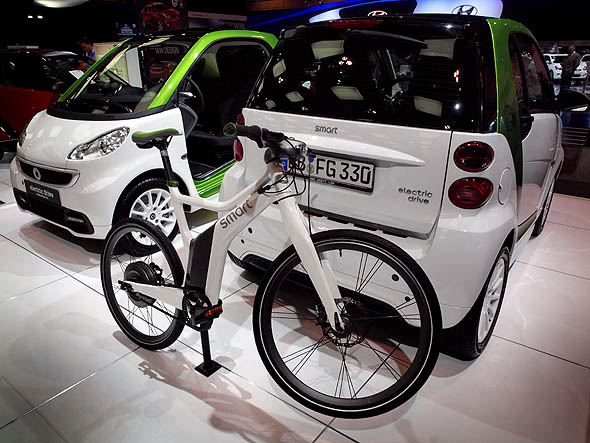 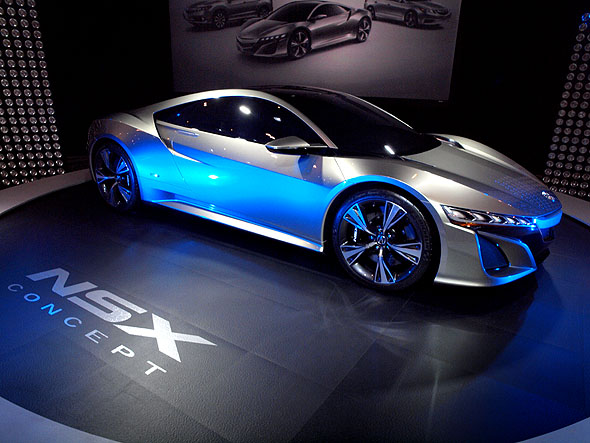 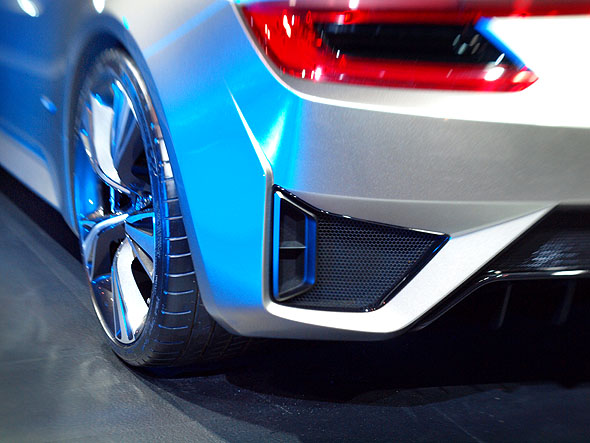 Which is all very nice, but no one can pretend that an auto show crowd has come anywhere near the end of their affection for the internal combustion engine, which is why Chevy still puts its constantly refreshed range of muscle cars on display, and Acura gave centre stage to their NSX concept, a revival of their supercar that they hope to get into production in three years. Mercedes-Benz might have the Smart, but their display still focused on the SL550, the convertible roadster version of the gull-winged SLS. 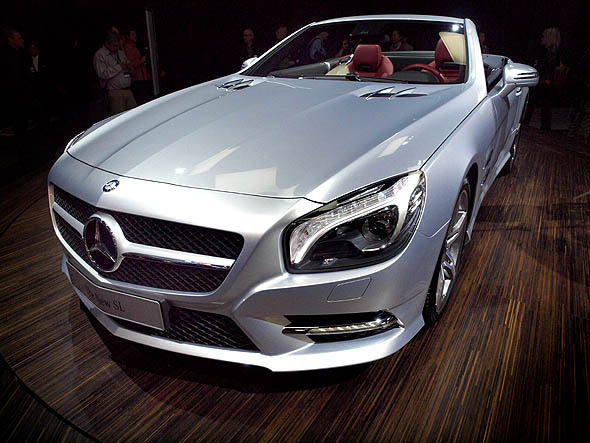 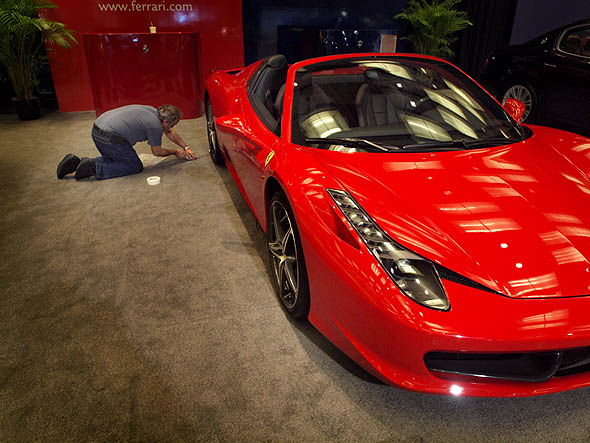 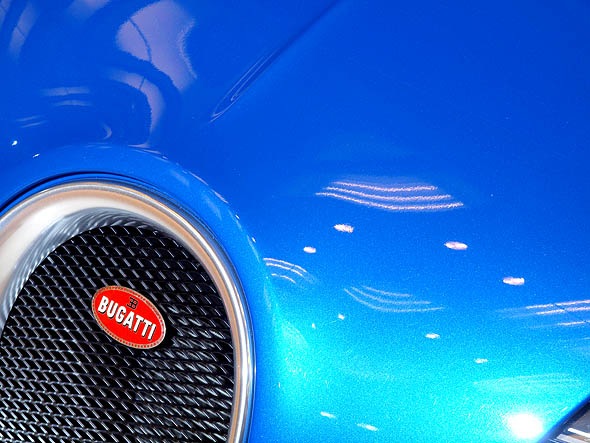 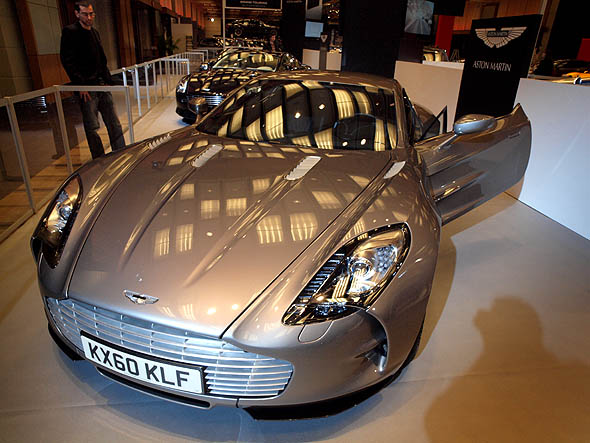 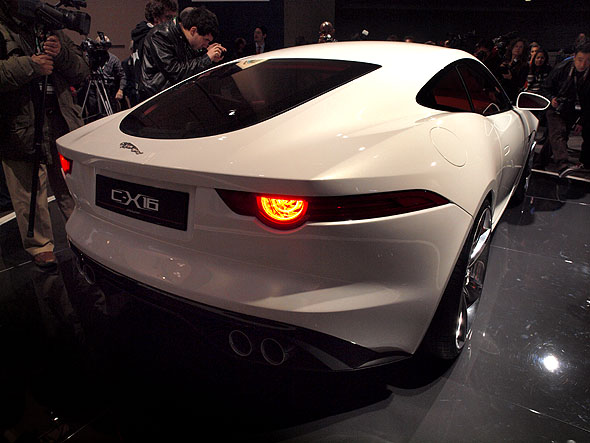 Jaguar managed to avoid this banishment thanks to being bought by Tata, the major Indian automaker that also reversed colonialism and bought Land Rover. Their display was built around the C-X16 concept, a more than faintly Porsche-like sports car that they're threatening to put into production as a hybrid. Which is all very nice, but you can't help but wonder when Tata will finally emerge from their British Trojan horses, make a foray into North America and goose the subcompact market for which they made their name in Asia. 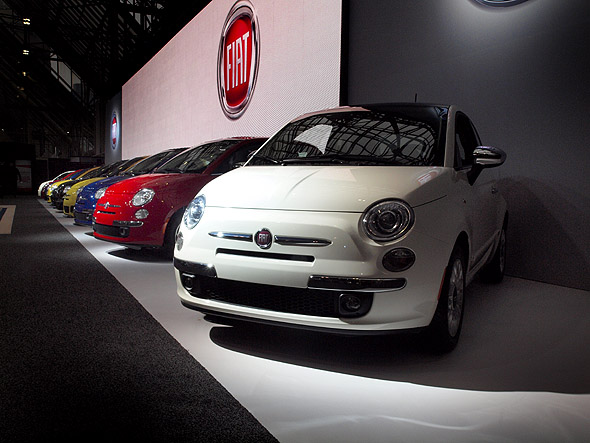 Because the subcompact market could certainly use a boost. Fiat launched their 500 with a splash last year, but didn't have much that was new to show besides the Abarth high performance rebuild of the little 4-seater and a Gucci-branded version. The Mini has also gone into creative idle - their display was devoted to the Goodwood Mini, a high-end luxury upgrade inspired by Rolls-Royce with an interior tricked out in wool, walnut, silk and cashmere, and revealed by a phalanx of hired models dressed as chauffeurs. 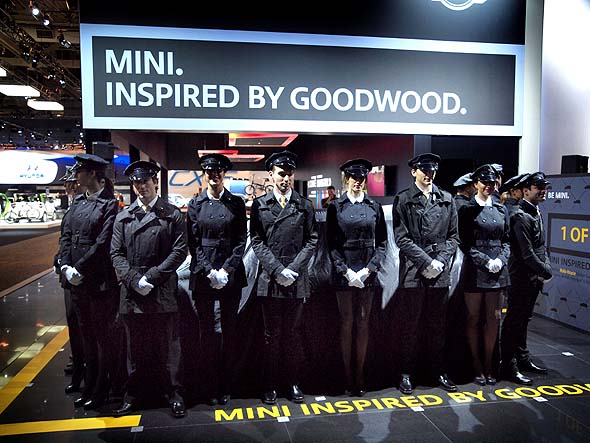 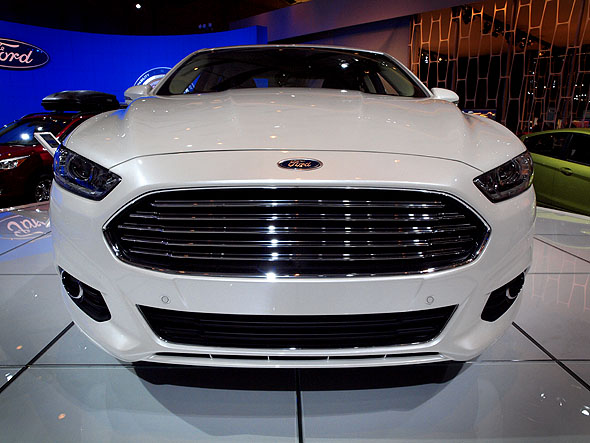 But these are all distractions from what is the ultimate business of an auto show - to show shoppers the new car they'll buy, after entertaining them with fantasies that are either unaffordable or unbuildable. Ford, the automaker that was once synonymous with the car itself, knew this when they unveiled their new Fusion line, which they plan to offer with a choice of five powertrains, and which faintly distinguished itself with a new grill reminiscent of the Mini. 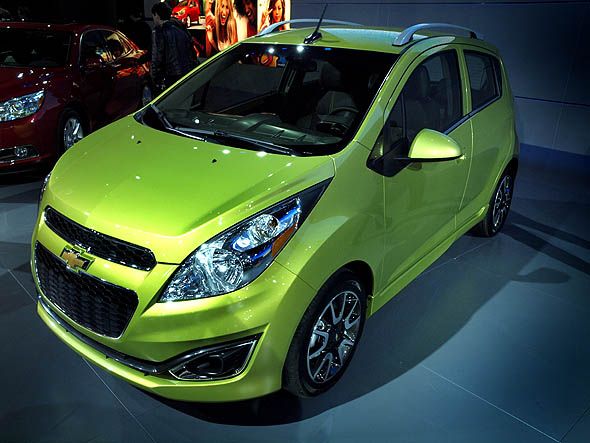 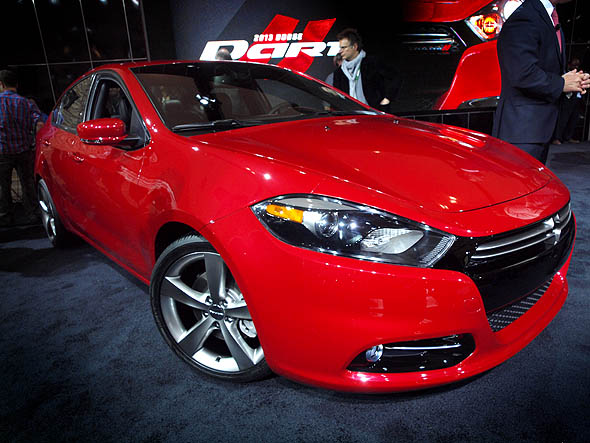 Chevy showed off its new Spark, a urban mini which began life as the Daewoo Matiz, and is being marketed to young car buyers with a range of finishes named after food (jalapeno, lemonade, salsa.) Dodge unveiled a revived Dart built from the Alfa Romeo Guiletta platform, another entry-level with feints at sportiness, though its base level variant will have the same engine as the Fiat 500. This is the reality of the global auto market - transnational companies swapping designs, names and parts across their lines, producing what are largely competent, safe, well-designed vehicles that end up looking indistinguishable on the road. 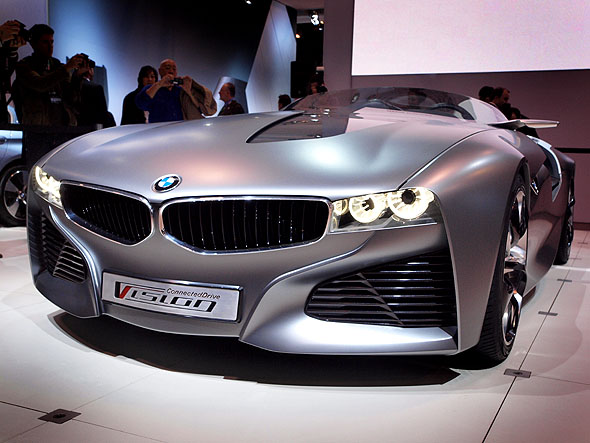 Which is why something like BMW's Vision ConnectedDrive ended up being an auto show hit. A concept car as it should be - remarkable, improbable, confounding and probably unbuildable - it sat on the display floor like a rebuke to almost every car in the building. Depending on which way you looked at it, you saw bits of C- and D-type Jaguars or some Teutonic iteration of the Adam West batmobile, but behind its metallic grey skin is something that is, depending on how you feel about driving, either miraculous or insidious. 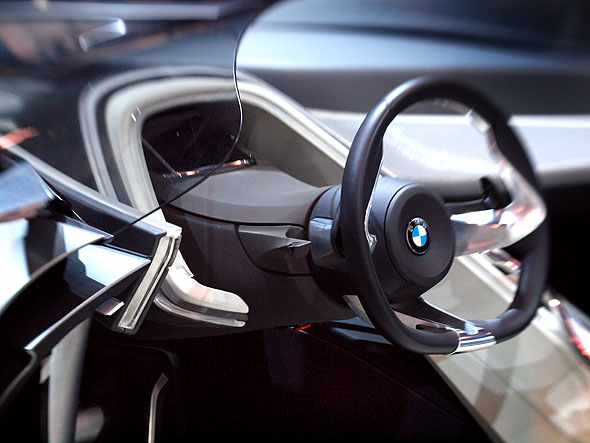 Like any really beautiful car, it looked fast just sitting still, but it was really built to showcase BMW's range of driving technology - the computerized wonders that are already being offered with features like parking assist and lane change warning, and which will likely evolve and proliferate until we no longer need to touch our car's steering wheel or put a foot on its accelerator. Which means that the Vision's tactile, inviting cockpit, with its promise of speed and comfort, is actually a spider's web, inviting drivers to let down their guards and eventually become superfluous. It was the best car I saw at the auto show, and it's a beautiful, evil thing.