Why I just don't get Toronto Maple Leafs fans

The Toronto Maple Leafs. Where to begin?

In the interest of full disclosure, let me start off by saying that I don't know a whole lot about hockey. To me, icing comes on top of a cupcake, Face/Off is a John Woo movie (and an excellent one at that!), and hooking is the oldest profession in the world.

It's damn near impossible to avoid hockey in Toronto. Despite limited exposure prior to my arrival in this city, I've learned a few things about the sport in my two plus years here and have had numerous debates with Torontonians on both the Leafs and hockey in general.

Here's my thing: Torontonians are so into their beloved Maple Leafs that it completely turns me off. I just can't get into it. Hockey, and the Maple Leafs are tantamount to religion here. It's just too much. Now, don't get me wrong — I've been to a lot of live sporting events, and hockey is up there with the most exciting of them. It's great to watch, and the level of skill and athleticism is extremely impressive. I just can't get behind the Leafs.

The problem is that the rampant fandom is just too much. During the NHL season all you see on sports channels is hockey. During off-season, all you see is... hockey. You can't avoid it. It's an assault on the senses. It even takes precedent over other sports that are in season!

I find it quite astounding that there is such a strong following for a team that, let's face it, has been terrible for 40+ years. When was the last time they won anything? I lived in Cleveland for a year and that's the most depressing sporting city in North America, but at least the people there are realistic! They know their teams are useless. It's actually impressive that there is such a loyal fan base here. That's one thing that I like about it. It shows true love!

Or madness. Don't get me wrong — I'd love to see the Leafs do really well. I think it would be great for the city, and that Brian Burke chap seems like a great guy. 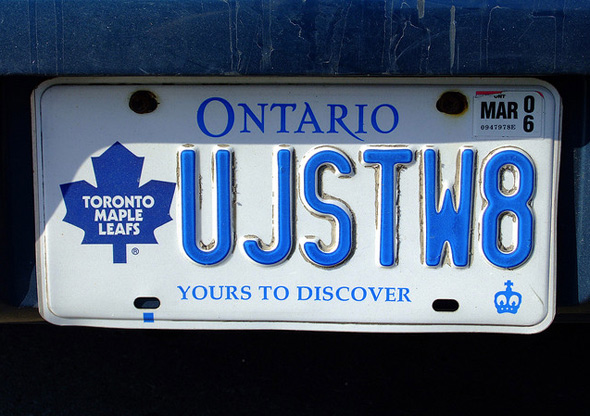 The apartment I live in is occupied by three Irish guys and one poor chap from Canada. Let's just say that if he wants to watch hockey on TV, there's a sports bar down the street. As a group we've adopted much of the so-called Canadian way of life, but hockey hasn't been a big part of this. I think we can share the blame — we could have done more to get into it, but have been completely turned off by the saturation of hockey in the city.

And that's not to mention the pragmatics. Leafs tickets are expensive and hard to get. Plus as a team, they're not that good (current four game win streak aside!) and don't have any bona fide superstars (sorry, Phil — score 50 and we'll talk). Where's the incentive for us? Granted Toronto is the biggest hockey market in North America, and I'm sure the franchsie could care less about trying to get me and my kind to go to games, which is absolutely fine.

I'd like to think that one day I'll be a Leafs fan. In an effort to sway me, my roommate (the Canadian one) bought me a Maple Leafs cap, t-shirt and mug for secret santa this Christmas. He even wrote a nice Christmas card with a message saying that this is the year they win it all... and that hopefully we'll be able to watch some more hockey on TV.

Ian moved to Toronto from Ireland just over two years ago and loves the city (if not the Leafs). He's here as a temporary resident and hopes to make it permanent sometime in the near future.