Where to get your car pimped out in Toronto

Road salt and slush are two reasons why Toronto will probably never have the almost venerable custom car culture that you see in the United States. A tour through the industrial parks and main drags in the far suburbs will reveal, however, that it still thrives here, despite the long winters that send these chopped, dropped, flame-covered, bass-pumping labours of love under tarps and into garages for at least four months of the year.

Pimping out your car will probably send you to a place like Toryork Road, which runs through the industrial parks that sit between York University and Pearson Airport. It's also the area where you'll go if you get into an accident - the street is home to a Collision Reporting Centre, as well as countless auto body and collision centres, their parking lots full of damaged rides missing bumpers and grills, while tow trucks make their way along the long curve of Toryork.

The tiny and cave-like showroom at TeamSLS is overwhelming at first, and proof that there's almost no part of your car that can't be replaced, rebuilt or otherwise improved. Besides the inevitable rims, the walls are covered with almost every kind of car part you can carry with one hand. There are wheel locks, racing nuts, starters, shocks, grills, lights, gear knobs, pedals, mats and badges, some of them quite striking - a display case contains blinged out badges for BMWs and Hummer H3s, as well as luxury pickups like the Tahoe, Yukon and Denali. Pride of place, however, goes to a big GMC name plate, the interior of the initials picked out in red rhinestones. 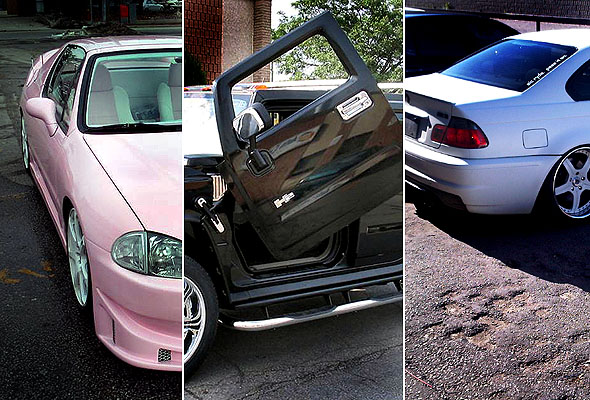 Improving your auto can start simply: SLS sells a dizzying range of car air fresheners on several shelves behind the counter, and $20 will get you a decent replacement bulb for your headlight, to give that cool blue cast that's popular nowadays. After that the options are virtually limitless, and cost ultimately beyond belief. Harry is working behind the counter on the day I drop by, and he tells me that a few years ago the car of choice for their (largely young and male) clientele was the Honda Civic or Acura CSX, while today they're seeing a lot of entry-level BMWs and Mazda 3s.

Improving on a stock car, new or used, usually starts with a basic package â lights and wheels are improved, a new keyless starter and alarm is installed, and suspension is lowered by at least an inch. In a city full of potholes and "traffic calming" obstacles this might seem reckless, but it improves handling at speed, although it begs the question of how often you'll find yourself shifting into fifth before your muffler and transmission are torn apart by the speed bumps on the street where your nona lives.

The SLS website features a gallery of finished jobs, ranging from remarkably tasteful and restrained reupholstery jobs to an interior redone in pink and white, and another in Gucci-print leather. Exterior restyling ranges from two-tone paint jobs to bumpers and side panels that hug the pavement, and a Hummer H2 fitted with "lambo doors" that scissor upwards. Harry tells me that except for Bentleys or high-end vintage collectible cars, there's almost nothing that that can't, or won't, customize, though he says that sometimes customers have an agenda that defies financial common sense.

Harry tells me about a customer who came in with a 1990 Nissan Sentra that he describes as a "rust bucket on wheels." He was willing to pay for an ambitious rebuild that would, among other things, involve swapping out the original motor and automatic transmission for a 280hp high performance one with a manual shift, but they told him that they'd need a whole other "parts car" to cannibalize, assuming that would be the end of it. He ended up coming in with another Sentra that was in better shape than the original, but insisted that he wanted his original auto redone, even if going with the parts car would have saved him money, so deep was the emotional investment he had in his Sentra, which Harry presumed was probably the first car he ever owned. 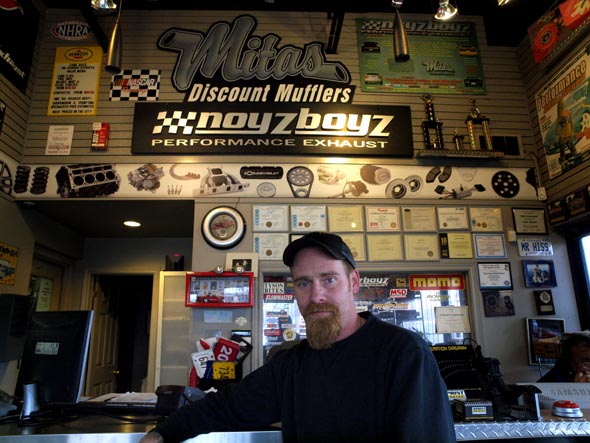 Car stereos are probably the subject of a whole other post, but there's one sonic upgrade you can do to your car that doesn't involve subwoofers. Out in far Scarberia, in a little hub of auto shops, NoyzBoyz Performance Exhaust is in the business of updating mufflers and exhaust systems to give customers the throaty roar or threatening rumble that drivers imagine suits their car's self-image.

Looked at simply, a car's air intake and exhaust system isn't very different from a musical instrument â for their LFA supercar, Lexus hired Yamaha's musical instrument division to tune their engine. John Hopkins, the floor manager at Noyzboyz, describes how the shop will take customers into the garage, jack their car up and let them see the work they'll have to do, and even do a free "test fit" of a muffler system to let them hear what they'll get.

It's a courtesy Hopkins says is actually essential for customer satisfaction: "Some cars you can only be in them for a half hour or so and your head is ringing." There is, of course, a physical aesthetic to their work, though, and Hopkins shows me shelves of mufflers fitted with different shapes of exhaust pipes or "tips," which he describes as the "jewellery" of the outtake system. 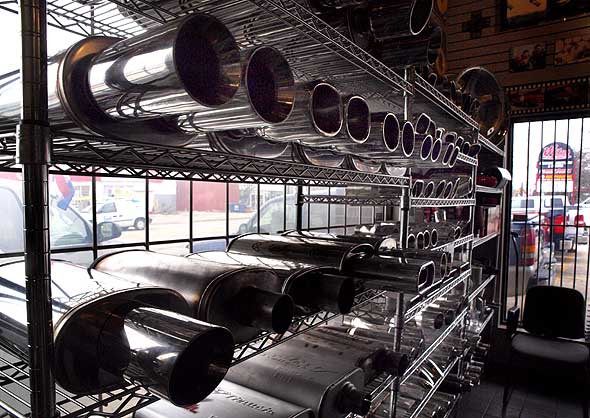 It all sounds about as green as a smelting oven, but John says that they try to recycle parts as often as they can to save customers money, and insists that improving your car's intake and exhaust can help both performance and fuel economy. He also says that they've done work on hybrids, which might run green part of the time, but still have an exhaust system for their gasoline assist engines.

The cost can run from a few hundred dollars for a new muffler up to $16,000 for a supercharged system, but like Harry at TeamSLS, John insists that you should never let an amateur or well-intentioned friend do the work for you. John says he's seen mufflers held on with bungee cords, aluminum tape and muffler cement, while Harry says that, with the complicated electronics in new cars, you absolutely need a 310k certified electrician to make sure your starter or GPS is wired into the right power supply. And since there are a lot of dodgy parts suppliers out there, working from unlicensed factories all over the world, Harry adds a bit of advice that will make sure you never go wrong: "Buy American."

A big thanks to the 2012 Chevrolet Sonic for sponsoring the blood, sweat, tears and elbow grease that went into writing this post.