Outdoor ice skating in Toronto is one of those activities that makes urban-dwelling seem a little less metropolitan. That is, unless you opt for the often-overcrowded rink at Nathan Phillips Square or another overly saturated outdoor spot. For the most part, though, these rinks seem to connect us a little better bit nature; be it through a lakeside view, a nature-immersed trail, or the windburn we inevitably get from spending too much time outside. While Toronto's natural ice rinks offer the best back-to-nature experience, they are, of course, weather contingent. So when the winter is a mild one like we're having this year, it might be better to check out some of outdoor ice skating rinks, open throughout winter in Toronto.

Sherbourne Common
This rink offers a simply stunning view of the city, as well a rink guard (occasionally) with whom you can enjoy the scene. While official skating hours are from 10 a.m. to 10 p.m., the rink is not fenced in, and thus, technically accessible at all hours. No rentals or changeroomsâjust washrooms.

Lake Devo
Ryerson students know it as the sometimes-functioning fountain and pond where Tim Hortons cups float astray in the summertime. Come winter, however, the pond is frozen over and the public can come skate from 9 a.m. to 10 p.m. Occasionally, you'll come across members of the Ryerson figure skating team practicing their axels, and members of Ryerson's freshman community practicing frozen funneling.

Colonel Sam Smith Park
Colonel Sam Smith Park is the only place in Toronto with an official ice skating trail. Though not great for shinny (at around 4.5m wide) the 250m trail has a bit of a respite feel to it (as it should, being in Etobicoke), with a washroom and changing area nearby.

Campbell Park
Tucked away in the Dupont and Lansdowne area, Campbell Park is a great place to hit up midday, when the rink is quite and you can work on your hockey skills. Come afternoon, things get busier with the local shinny crowd. They also have a hot chocolate stand and $2 skate rentals. 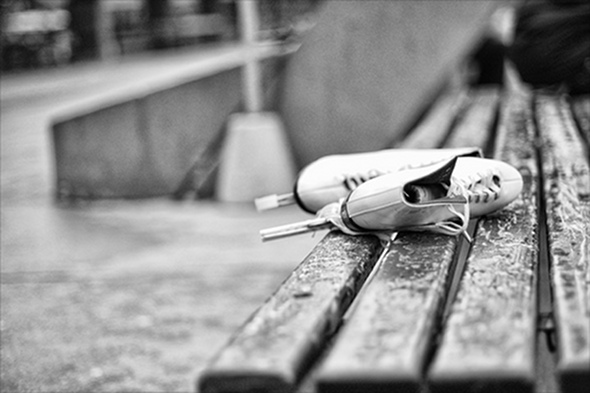 Brick Works Ice Trail
While not an official City trail, the Brick Works' free ice trail is not one to overlook. Under old industrial rafters, the Brick Works trail is open weekends 11 a.m. to 4 p.m., and Thursday evenings from 5 p.m. to 9 p.m. Skate rentals are available for $5 (or PWYC) and good food, of course, is available nearby at the farmers' market.

Kew Gardens
Like Christie Pitts, Kew Gardens' outdoor rink has designated times for free skate and shinny hockey. Though small, the change area actually has lockers for public use, meaning you don't have to worry about your boots sitting lonely by the side of the rink. Kew Gardens is one of the longest-open City rinks, available for use until March 11.

Trinity Bellwoods
Not exactly the place for a quiet, leisurely skate, but Trinity Bellwoods' rink does offer plenty of room for laps or a game of shinny. The fenced-in rink is one Toronto's few outdoor rinks that has designated shinny times for women's hockey, scheduled here this winter on Monday evenings. No rentals, but there is a nearby changing area.

High Park
High Park has two outdoor rink pads and its own zamboni onsite for regular maintenance. The rink is open as early at 9 a.m. on some days, and closed as late at 9:45 p.m., depending on whether free skate or shinny is on the roster. No rentals here either, though there is a changeroom for lacing up. 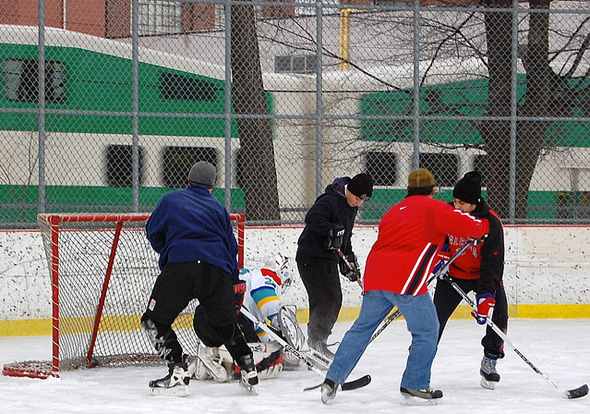 Dufferin Grove
Dufferin Grove is another spot for women's shinny and also one with two full-sized pads. This rinks is one of the best in Toronto in terms of amenities, with a $2 skate-lending program, a kitchen with fresh snacks, lockers, changerooms, organic coffee and hot chocolate, and (best of all) occasional live music.

Habourfront
Harbourfront skating is especially jolly during the holidays when it's drenched with music and cheer, though skating at the lakeside rink continues through the rest of the winter. Pleasure skating is free from 10 a.m. to 10 p.m. (11 p.m. on Fridays and Saturdays) with rentals available onsite and plenty of hot drinks and snacks. DJ skate night is held every Saturday night, testing our collective ability to grind while on blades.

Wallace Emerson
Wallace Emerson's double-pad rink is available for shinny and pleasure skates. One pad is left unfenced for the season, meaning skaters can take to the ice after the designated 9 p.m. or 10 p.m. close. The change area has skates and helmets to lend out for a nominal cost, as well as a snack bar and some books and games.

College Park
Right in the middle of all the action and unfenced â not great from nearby condo-dwellers, but idea for those keen on midnight skates. The rink at College Park is designated for pleasure skating only (though occasionally the young and restless will tote along a puck), and perhaps for that reason, often seems to be in pretty good condition. Changerooms and lockers onsite, though no rentals.

Note: This list was originally compiled in 2010, but was in need of an update due to new rink opening since then. We've purposely kept most of the archived comments here because we believe they (mostly) add value to this topic. If you don't want to have to wade through all of them, simply hit the "sort by newest first" link at the top of the thread.