Lifting off at an aerial yoga class

I'm by no means a yogi, though I have taken a number of enjoyable classes over the years. Still, because I love alternative and creative workouts, when I heard about bspoke athletics's Zero-Gravity Aerial Yoga class, it sounded right up my alley.

Aerial Yoga is pretty much just what it sounds like — practicing yoga in the air — thanks to a fabric trapeze (also known as a silk). The silk, which is suspended from the ceiling, aids in the performance of traditional yoga postures on the ground or allows the more brave among us to get off the floor and even inverted.

bspoke athletics started offering the program about nine months ago, after owner Jonathan Farber discovered it — by accident, no less — during a trip to New York City. "For me, fun has never been a word I'd use for Yoga," he laughed, acknowledging that while many people do enjoy yoga, it's just not his cup of tea. "But when I saw this postcard I stopped and thought, wow, this looks really fun."

Inspired, Farber began to work to bring the practice to Toronto. 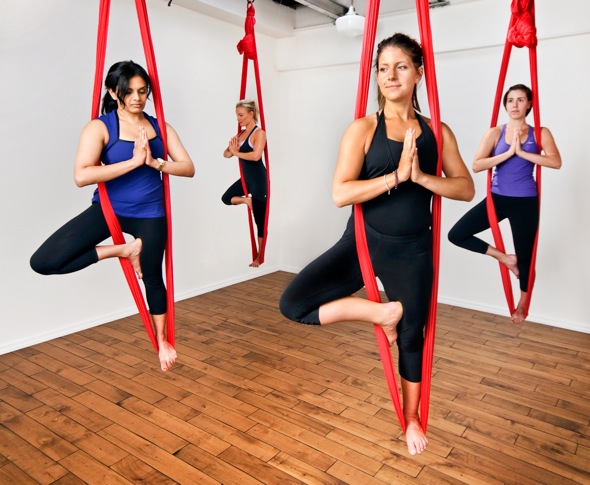 The session began with some stretching, using the silks in a very basic way for stability and balance. Within minutes, however (at least it felt that way!), we were gearing up to try our first inverted pose. Sitting on the edge of the silk, instructor and self-proclaimed yogi Jennifer Adinolfi instructed us to lean back, wrap our legs around the front of the silk and lock our ankles in; effectively leaving all eight of us giggling and hanging upside down, hands firmly planted on the floor.

"Now lift your hands off the ground, and hang," she said. Eyes wide, I look around and see everyone else tentatively moving one hand, than the other. It took me a few tries to work up the nerve to remove my hands, but once I did it felt great to hang suspended in the air like that, feeling almost as if I was floating.

Later on in the class, we did a shoulder stand — our entire bodies were wrapped in the silk as we hung straight legged, upside down, with nothing but our shoulders dug into the silk for support. 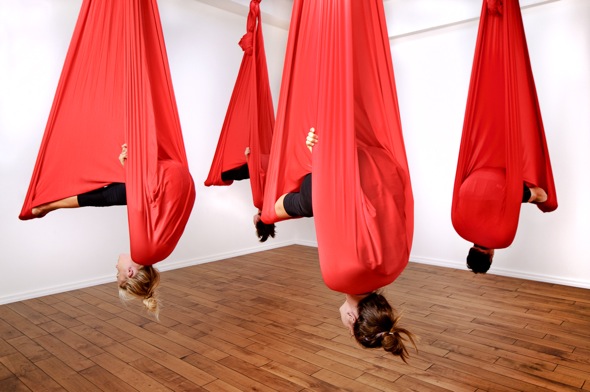 Even the normal yoga postures involved the silk in some way, and I found it much easier to flex, bend, and hold some of the more traditional poses with the aid of the silk.

I was a bit disappointed we didn't do more inversions during the class, but with a group of mostly beginners — some even to yoga — and an older women who was giving it a whirl, I can understand why Jennifer stuck to more grounded, traditional poses, and it just made me want to go back and work to become more advanced so I can get to the really fun stuff. 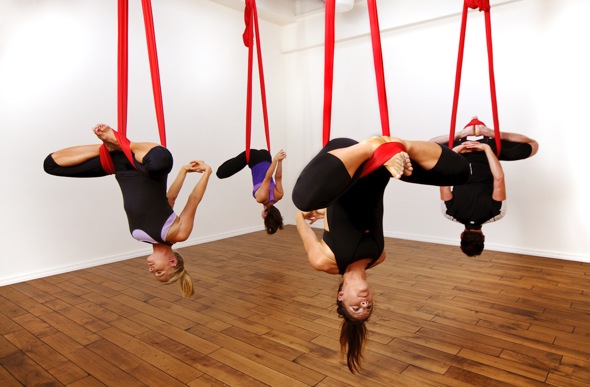 Right now, bspoke athletics offers beginner classes a few times a week. If the diversity of my group both in age and experience is any testament, anyone and everyone is capable of giving aerial yoga a try.