Girls fight for a cause at Toronto boxing event

The idea of holding a boxing event to support a shelter for abused women might seem a little odd at first. After all, the image of two people smacking each other around in the ring to the hoots and hollers of the crowd doesn't exactly mesh with mainstream notions about how to raise funds for women seeking refuge. But GirlFight, a seven match all-female boxing tournament held last night at 99 Sudbury, was exactly that. 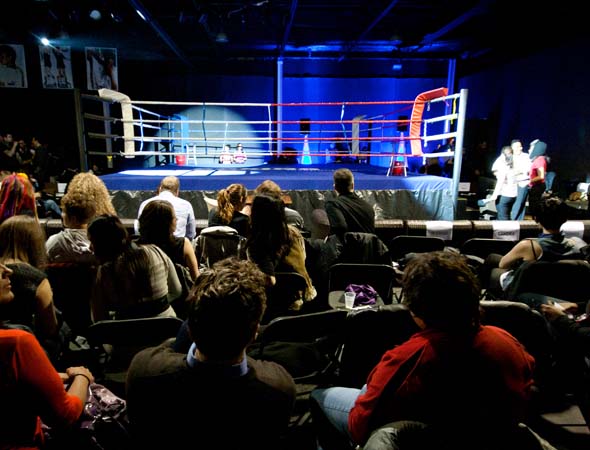 Hosted by Toronto Newsgirls Boxing Club and presented by Pink Mafia, fourteen women took to the ring to deliver hooks, jabs, and uppercuts, with all proceeds going to Nellie's women's shelter. 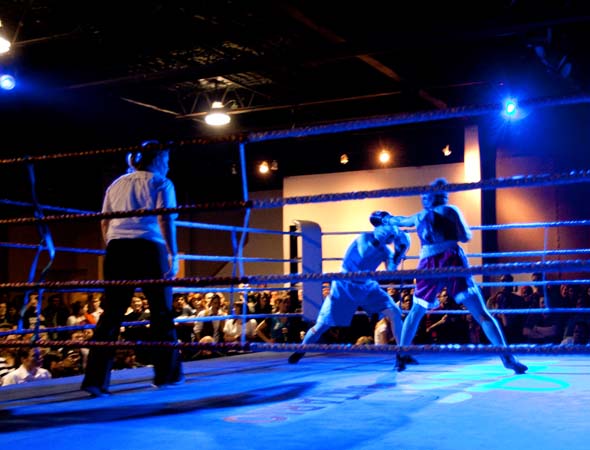 The room was electric when we walked inside. Bodies everywhere, drinks flowing, music pumping and lights all on the ring. I took a seat next to a man who turned out to be Lee Turner, owner of Concrete Jungle and boxing coach to Anna Von Frances of Pink Mafia, who was set to fight her first ever match that night. "We've been training several times a week," he told me. "I think she's ready."

Maybe so, but the space was packed with maybe 200 to 300 people. I'm not sure I would be so brave as to fight my first time in front of so many people.

The pair met at an event Von Frances ran about two years ago. They started working out together, and she eventually told Turner she needed a goal. That's when they decided they would train her for a fight.

"She's a fighter in her heart," Turner said. "The mark of a true fighter is that they keep coming back for more. That's Anna." 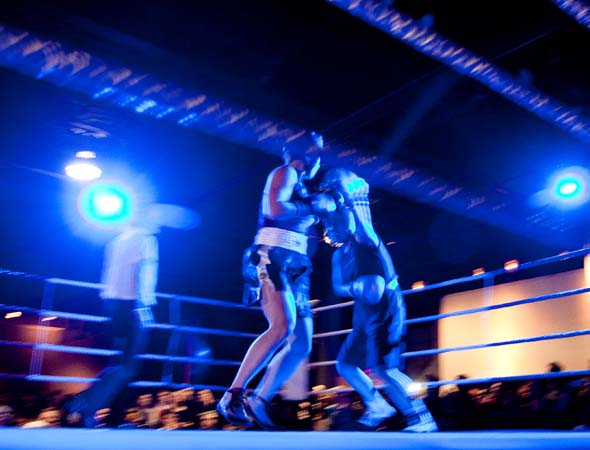 Von Frances came up with the idea for the fundraising event while she was training with Turner. She realized how tough you have to be, physically and emotionally, to fight back when you're down both in and out of the ring. 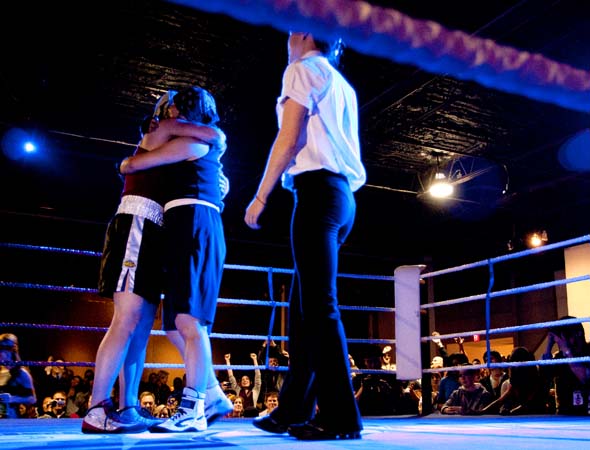 Toronto Newsgirls Boxing Club has long recognized the potential of reclaiming power through boxing. Its Shape Your Life Program, which offers free boxing lessons to women and trans survivors of violence, has been going strong since 2007. I didn't get a chance to talk to Savoy Howe, owner of Toronto Newsgirls, last night (she was glued ringside with a video camera in one hand, a beer in the other, cheering on her girls the whole event through) but I have met her several times in the past and visited the Newsgirls space. The mantra there is all about building self-esteem and empowerment through physical fitness and positive expressions of aggression. 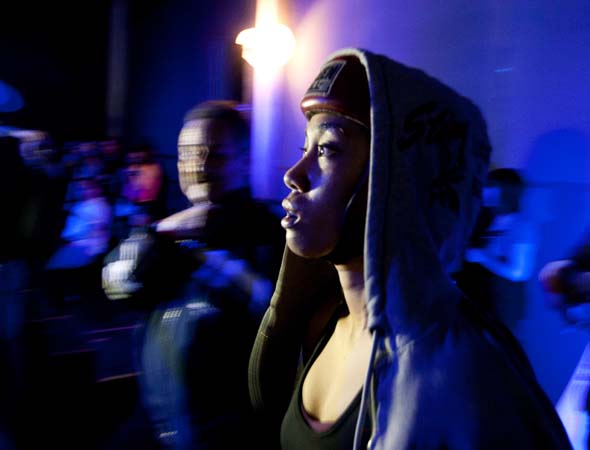 And there were plenty of those expressions last night. The first bell rang a little after eight p.m. and the first sparring pair took their corners; Heather Baxter from Grant Brothers Gym in one, Tanya "The Lion" Daye from Toronto Newsgirls in the other. The room was charged, and the DJs were on. And before we knew it, they went at it. Not with dainty brushstrokes either. In fact, the ref called the match after what seemed like one minute. RSC or Referee Stops Contest; Baxter was getting pummeled. 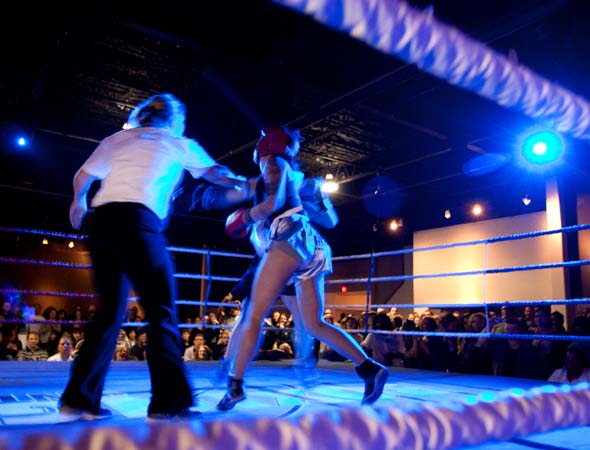 Then, after a brief intermission to deal with a lighting problem (wherein "99 Problems" blasted from the speakers, a curious choice of song for such an event, I thought) we were on to the next. It was 18-year-old Chloe Madonia against 32-year-old Sue McFadden. These fighters were more evenly matched, and fought all the way through to the third round, after which Madonia was ultimately named the winner.

After three more matches, it was Von Frances' turn to face Christine Noble from Toronto Newsgirls. I couldn't see Turner, but he told me he was going to give her a quality pep talk right before. After touching gloves, the opening bell rang and Frances quickly found herself in the corner where she took some hard hooks to the head. The ref broke it up. Back at it, the pair exchanged a few jabs, and then again, Von Frances was pinned up. A few moments longer, and it was RSC for the second time in the night. "It's important that our officials keep our fighters safe," the announcer said. 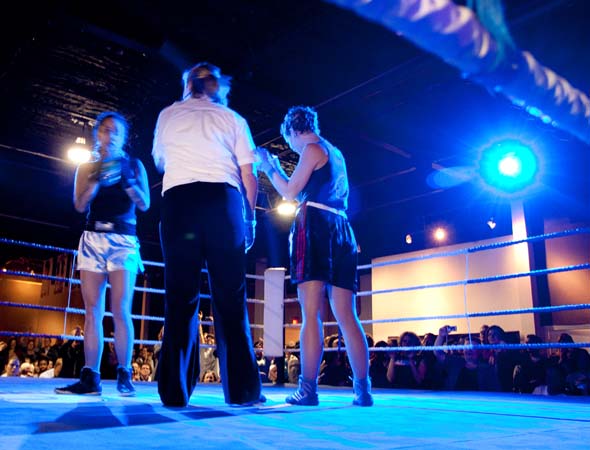 A little later on, I caught up with Turner to get his thoughts on Von Frances' fight. "I was hoping it would go to three rounds," he said. "But she lost to a very worthy opponent. And I always say, you learn a lot more when you lose." Then we turned back to the ring.

The final match was phenomenal. Peggy "Shadow Blow" Brenya faced Erin Krekoski for four intense rounds where the crowd stayed on their feet and the volume in the room reached incredible levels. "Those girls," Turner said, eyes glued to the ring, "those girls, well they're fighting." Krekoski took the match.