Off-track betting at the Greenwood Raceway

Greenwood Raceway is the place most of us pass by on our way to the Beaches. On Queen Street East by Coxwell Avenue, it's that beige movie theatre-looking building that awkwardly stands out among the cafĂŠs and antique furniture shops unobtrusively lining the street. And then there's the honking illuminated "Greenwood Off Track Racing" sign. At least you won't miss it.

Once host to live racing, Greenwood has been a teletheatre for about the past 16 years. The actual races have moved to Woodbine Racetrack on Rexdale Blvd. north of the airport, so there are no horses at this location. Still, I managed to find a totally different animal here. 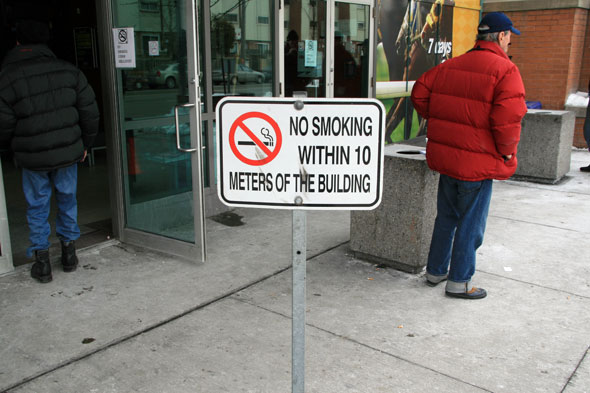 The first thing I noticed as I approached the front door was the wealth of "No Smoking Within 10 Metres of the Building" signs. But just like badassess with skateboards, four old men in toques puffed away on their cigarettes while practically hugging the entrance. They eyed me as I breezed past, and I could just about hear their minds try to make sense of the scene: "Mhpf. Girl must really need the bathroom."

But no, I was there to try to figure out how to make my fortune betting on a few strutting stallions. Greenwood provides simulcast coverage on 350 screens for races from all over the world; though walking in, you feel like you're in an airport going nowhere. Rows of salmon-coloured seats with wooden cutout cup holders line the space--all facing a wall. Suspended above are tube TVs (and the occasional flat-screen) broadcasting various races and stats. The pictures were moving quickly, but it was as if everyone in the room was frozen. And I, of course, was lost. This would be a recurring theme. 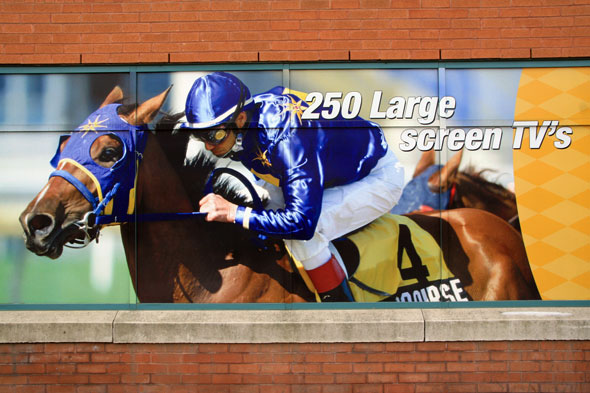 Obviously my face showed the confusion of a 15-year-old boy encountering a front-clasp bra, because an employee at the front desk offered to take a few minutes (or 50) to explain just how everything works.

"There are a variety of different things an experienced better looks at when deciding where to place a bet," he said, pulling out a program. I'm pretty sure it contained a series of advanced logarithms, but Chris (as his name tag read) assured me it was all relevant track and horse information. "You have the names of the horses, the more recent dates they ran, how they placed, which track, the condition of the track..." My eyes began to glaze over as Chris went on to explain the various statistical abbreviations and the intricacies of the dirt track.

Then, we moved on to how to actually place a bet. At Greenwood you can either place your bet with a teller or through a self-serve machine. Though Chris was gracious enough to walk me through the self-serve terminal, my mind was still stuck on his previous explanation about the difference between a "trot" and a "pace" and something called a "daily double." Still, I nodded and feigned competence and was soon left to my own devices. Five dollars in hand, I could've gone to the teller and again confessed my confusion, but I opted for the more private humiliation of the self-serve machine.

I chose a terminal and gave it a cockeyed stare. The man at the terminal on my left--probably 75 years old, plaid shirt, green pants to the ankles, ill-fitted toque (I was noticing a trend)--was done in about 20 seconds. After about four minutes, I had printed my ticket.

I bet on the Penn National race in Pennsylvania, which was set to start in 17 minutes ("17 MTP," or minutes to post, as it read on the screen). After putting in my amount, I picked my horse. A sucker for puns, I chose the horse named "Now and Zen," who had the worst odds (12-1) but indisputably, the best name. Next was the bet type. You can bet that your horse will "win," "place" (finish first or second), "show" (place first, second, or third) or a variety of other outcomes and combinations. I pressed "show" printed my ticket, and wandered off to find a seat.

As I walked through the rows, it was clear my estrogen was showing. The place was all men, all over 50, and it appeared some sort of head covering was a practical necessity. A few men in baseball caps and toques were gathered at the little bar on the west side, some others around a table on the east end by the canteen selling veal on a bun ($5.25) and bacon strips ($0.50 each). 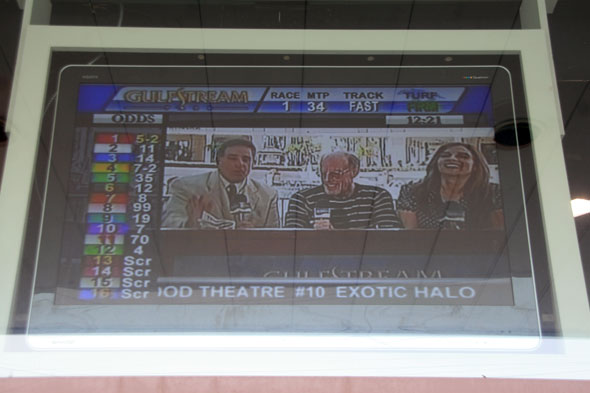 By some stroke of luck, I had managed to plop down in front of a TV that would be showing the Penn National race. Ticket in hand, I eagerly watched the screen. For a moment I felt just like I was at the Kentucky Derby--without the obscene drunkenness. The race started, and after 20 seconds (or so it seemed) it was over. That punk Now and Zen--well he finished fifth, and I walked out empty-handed. Next time, I vowed, I'd bring some friends, pay attention to the odds, and maybe have a beer or two. And, of course, I'd have to wear a toque.