Neutron Bomb walked away victorious this time, reclaiming the world title in a hotly contested match that ended in a pinfall during round three.

These are not your typical pillow fights you'd imagine at a sleepover. The PFL has recruited a new batch of fit, fun and fearless female fighters that bring more entertainment to a show than you'd ever believe. 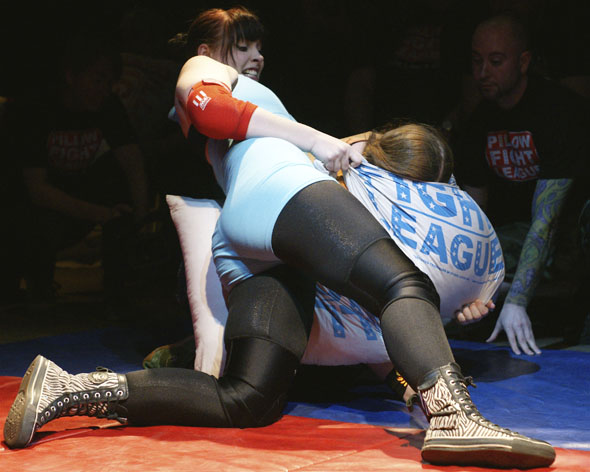 Competitive PFL bouts have been held in Montreal, Hamilton and Guelph, as well as stateside, where they've even entertained 13,000 Charleston River Dogs fans at a minor league baseball game in South Carolina. 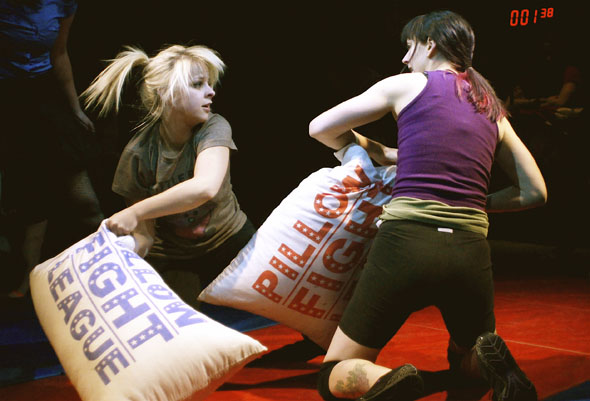 Monday night's bout showcased some new recruits. Dee (pictured above left) beat Michelle in a tight match that ended in a split decision. 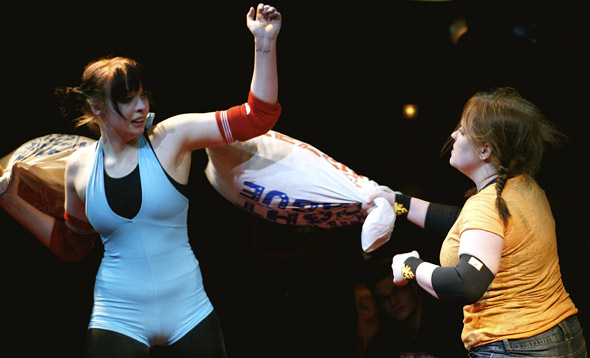 Bobbi Pinn had a rough-and-tumble bout with Shady Godiva (pictured below in the green tights), but emerged victorious. 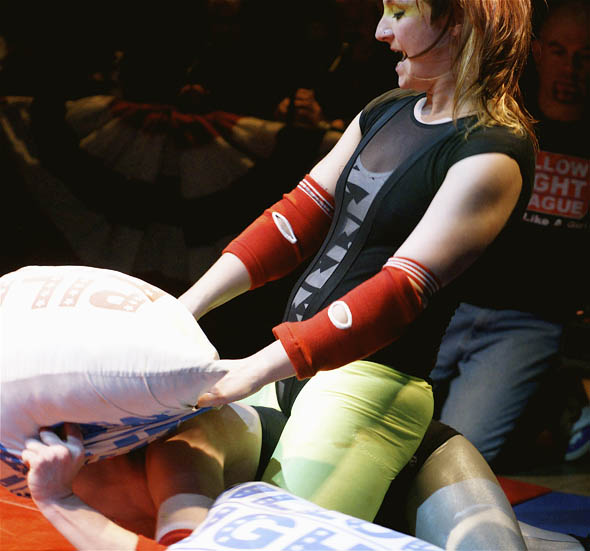 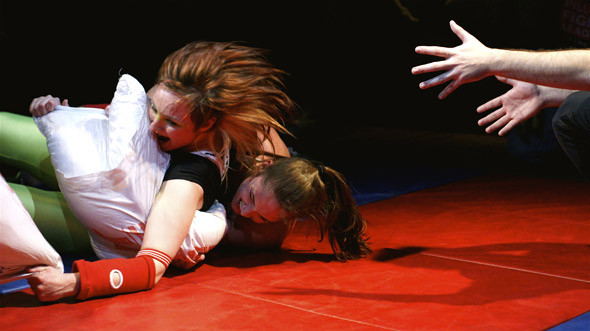 At one point, Godiva had Pinn's head in a leg lock and proceeded to braid her hair. Who braids hair during a fight? 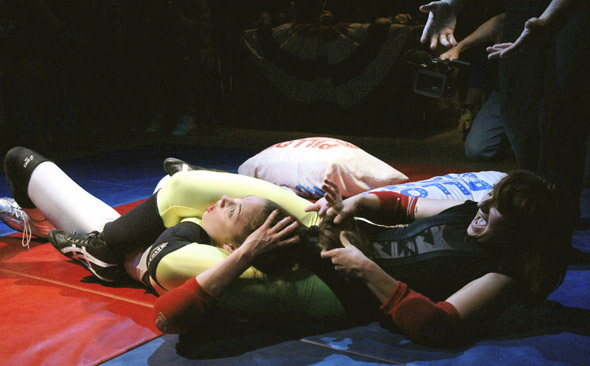 Later on in the night I witnessed Apocalipstic trounce Fallon (pictured below) in a vicious grudge match. 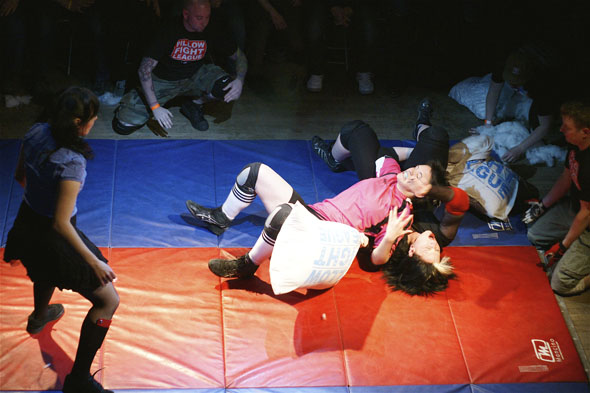 PFL is usually strictly a girl's sport. After all, their motto is 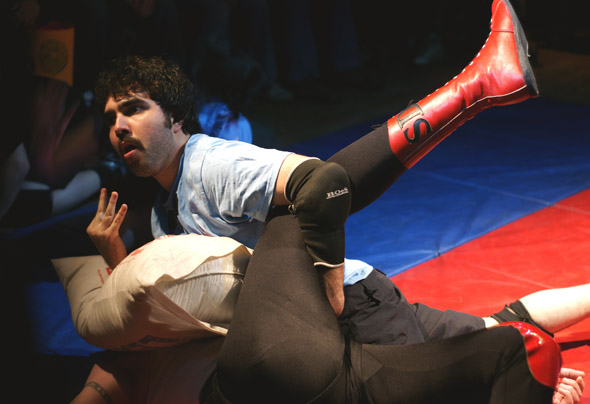 Fight Like A Girl. But PFL Commissioner Stacey "Wha-Bam!" P. Case, 42, took to the ring against PFL referee Ross Jeremy in a hilarious display of bravado and showmanship.

Round one was more of a runaround, which saw a chase scene up to the Mod Club balcony, ending with Case losing by pinfall (pictured above) after being dragged from under the judge's table where he tried to hide. 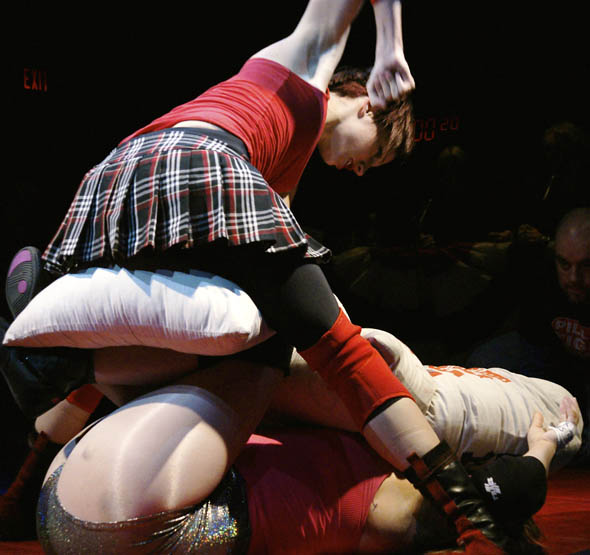 Dinah Mite (pictured above) faced off against Victoria Star, getting a few good punches in, with only the pillow to soften the blows.

A Pillow Fight League night wouldn't be complete without some amateur girl-on-girl action. Two of The Mod Club bartenders got in on a fight. The Croatian Sensation squared off against Argentinian Flash. It was almost like a World Cup Soccer match. This time, Argentina won.

And two girls were picked out from the audience to get it on in the ring in a two-minute fight. They were quick to give themselves PFL names: Blitzkrieg and ErratiKatie. Will lightning strike twice? 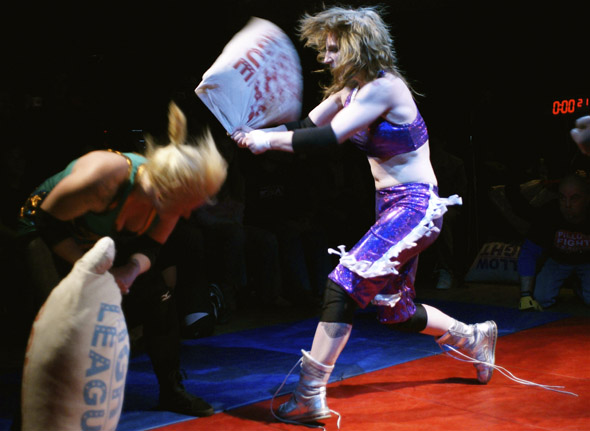 But it was the final bout, between world champion Charley Davidson and Olivia Neutron Bomb that got the fans all riled up. Davidson (pictured above right) came out swinging, but the Bomb ended up with the belt after three grueling rounds. 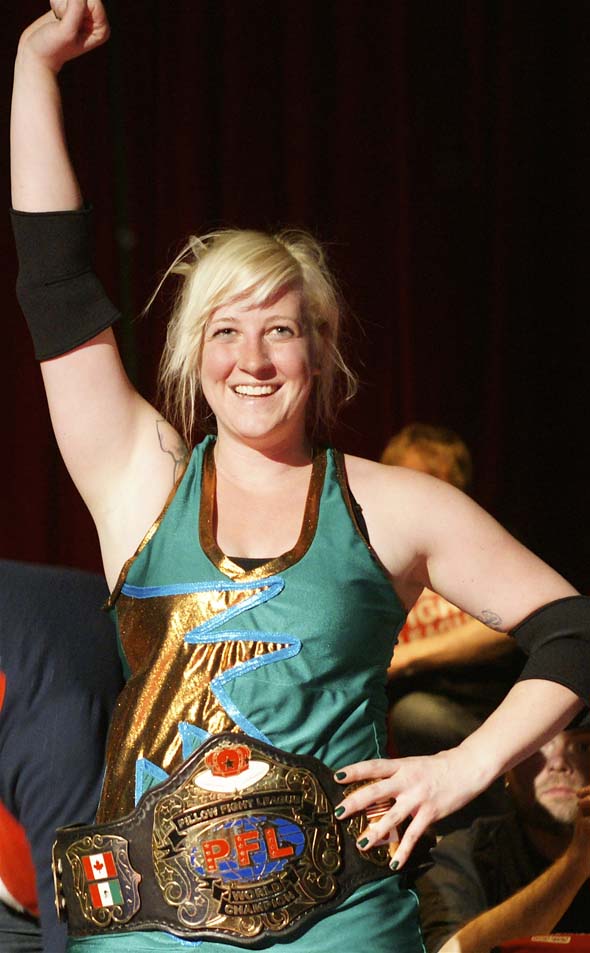 And to see just how the final bout was won, check out this 77-second video: