Think you can fight like a girl? Got the eye of the tiger?

The Pillow Fight League (PFL) in Toronto is recruiting new fit, fun and fearless female fighters. I dropped by The Garrison on Sunday to see who showed up at the tryouts and got to witness just what it takes to join one of the most grueling yet fun endeavours a young woman can aspire to today... 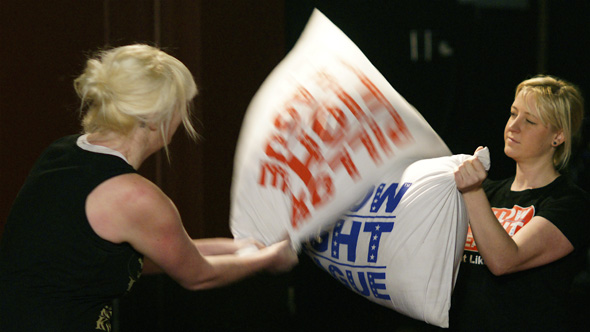 "Only 30 per cent of those who try out for the Pillow Fight League make it through," says Vanessa Aislin, 28, better known by as Apocalipstic. "Of those, one in three stick with it. Some show up for one show and then quit."

Aislin has been in the PFL for a year and a half. She's been out of action the past four months after breaking her arm fighting, but she's not deterred by this temporary setback. "It was the first major injury in about 40 events in five years," says Aislin. "I still fight because it's fun, I enjoy entertaining the crowd."

Aislin joined PFL within a week of Charley Davidson, 27 (pictured below) who's the current PFL champion. 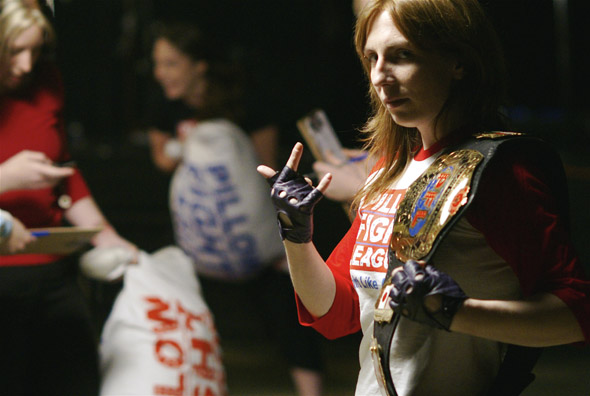 Pillow fighting for girls is gaining in popularity, with competitive bouts popping up in Montreal, Hamilton and Guelph. The average age of fighters in the Toronto Pillow Fight League is 25-30, but there are girls from 19-35.

PFL Commissioner Stacey Case says that the women of the Pillow Fight League are all different shapes and sizes. "During the day they're I.T. managers, marketing coordinators, career counselors. One of us even works at a Tim Horton's.... But at night they're fighters, entertaining sellout audiences of women and men."

So what's it like trying out for PFL? Well, first you've got to answer an elaborate questionnaire, which lets the league get to know what kind of person you are. Then you do a series of drills, led by current PFL girls and trainers.

Jacqueline McDonough, 36, (in top photo, on left) was one of the girls trying out on Sunday. "I like Muay Thai and running," says McDonough. "I like to stay active and usually compete just against myself, but this looks like more fun."

At just four-foot-eleven, but with a menacing-looking half-shaved head and several tattoos, I found it surprising to hear that she found the hardest part about the tryouts the push-ups. 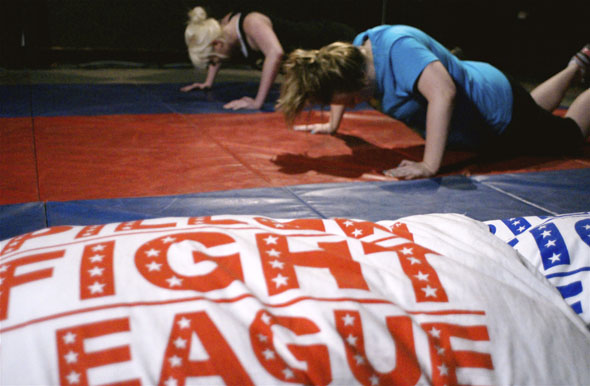 Aside from the push-ups, there's a series of one-minute intervals that includes jumping jacks, burpies, the plank, fireman's squats and pillow swinging, as well as stand-up and wrestling fights. Just looking at the face of the girls holding the plank position for two minutes made me break a sweat.

Sofia Walmark, 23, is back for a callback after her first tryout. Her PFL stage name's Kitty Kapow and this time she's removed her six facial piercings. "I realized I'm in terrible shape after the first tryouts," Walmark admitted, "but that can improve with time and effort.

What prompted Kitty Kapow to try out for PFL? "I got a flyer at The Mahones show on St. Patrick's Day and thought it's something I'd want to work towards. I checked out the video on their website and thought it was really badass."

Jessie Elliot, 26, known as Shady Godiva in PFL circles, joined the league about a year-and-a-half ago. She sympathizes with the girls trying out. "After my tryout, I was like, 'Could someone please cut my sports bra? Because I can't get it off."

New to the scene is Andrea Gillis, 24, a six-foot-tall blonde. She gets to try out with a Siobhan "Wham Bam Bon" McCausland, 24. Observing them trying to lift each other in the fireman's squats exercise was quite something.

Meanwhile, Michelle "Miss Fits" Belliveau, 27, a sprightly, purple-haired girl of five-foot-four stature awaits her callback opportunity on the sidelines. She later gets to practice alongside McDonough. 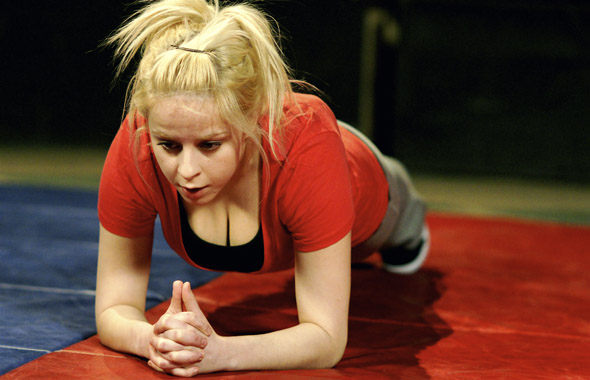 Then there's Danielle Jarrett-Fisch, 22, (pictured above) a blonde powerhouse who used to wrestle in high school, once winning silver in a Toronto-wide competition. She's a student of the Advanced Television and Film program at Sheridan College. What prompted her to join PFL? "I've got a lot of pent-up anger after my boyfriend dumped me."

Mercy Southam, 23, better known as Bobbi Pinn -- who joined PFL about nine months ago -- helps out with the drills. You'd think that, with a name like Mercy, she wouldn't need a PFL name. "I'm gonna keep these two ladies separate," she decided.

For practice and competition, the PFL uses exclusively queen-sized, double-stuffed polyfill pillows. And loading a pillow with any foreign object is strictly forbidden.

"None of us are out to hurt anybody," insists Southam, who says none of the fights are choreographed or predetermined, like in a lot of wrestling matches you may have seen on TV. "All the fights are real. Once we're on the mats, we don't know what's gonna happen."

Wanna try out? Tryouts continue at scheduled practices in downtown Toronto on Mondays, Wednesdays and Thursdays from 7 p.m. to 9 p.m. Think up a hot, punny name like Olivia Neutron Bomb and be prepared to fight like a girl.

Look out for the next PFL show at The Mod Club on April 27, featuring some of the girls you see in the full series of photos from the tryout below, in sweaty, pillow swingin' action: