From the Cheap Seats, Another Season Ends

Fall is here, and with it comes the end of another baseball season. As the select few MLB teams move on to October glory, fans of the teams that didn't make the cut reflect on another season gone by.

When I first moved to Toronto in the summer of 1994 the "internet" meant noisy modems, and cell phones were heavier than dumbbells. The Toronto Blue Jays were coming off two World Series victories, and it was a good time to be a Canadian baseball fan - or so I thought. I left Toronto in the summer of 1999, after 5 seasons of watching Gord Ash's Jays try to reclaim the glory they once had. They never did. In fact, they still haven't.

But as a kid entering my teens, the times I spent in the then Skydome left an indelible impression on me. I remember Pat Hentgen winning Canada's first Cy Young Award. I remember turning on the TV to see Roger Clemens, the greatest pitcher of the day, come to Canada. I remember a classic Canada Day pitching matchup between Pedro Martinez of the Expos and Clemens - two of the best in the game going head-to-head, toe-to-toe. I remember watching Roy Halladay pitch a no-hitter in his second career start, only to watch it vanish on a solo home run with 2 outs in the ninth. I remember BJ Birdie and Domer. I remember when every game had a packed house. 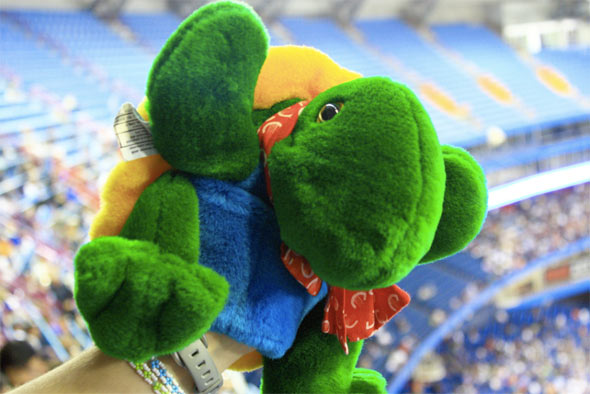 I only vaguely followed the Jays while I was living outside of Toronto. After all, there was little to follow. The franchise players I'd known had been traded. Players like Halladay, Wells, and Hinske (if only for a moment) rose to prominence in their place. But all in all the team was still static, dangling in mediocrity much as they had since 1993.

In 2005, I fell in love with a girl. A girl who likes the Blue Jays... no, that doesn't do it justice - a girl who LOVES the Blue Jays, and who could rival any member of Red Sox or Yankees Nation. She is a member of Blue Jays Nation... population, Very Small. Let me tell you, I realized very quickly what a rarity I had found.

Very soon I found myself following the Blue Jays yet again (not that I was given much of a choice). But things were looking up. The Jays were heading into the 3rd year of JP Ricciardi's 5 year plan and glimpses of success were visible, like the home-grown talent Aaron Hill making his debut for the team. That winter, the Jays did something they hadn't done since 1997 - brought a major free agent to Toronto. In fact, the arrival of BJ Ryan, AJ Burnett, Troy Glaus, Bengie Molina and Lyle Overbay and the emergence of Alex Rios proved to be one of the best years in Toronto baseball since 1993.

Naturally, when we returned to Toronto in 2007, we bought seasons passes and vowed to attend 40+ games a year. We never quite hit that mark, but we came close. From the 500-level, we've seen highs, we've seen lows, and as usual, every September, we've felt the sting of Blue Jays disappointment. This season has been particularly hurtful. We are now in Year 8 of JP Ricciardi's 5-year plan. I cringe at the thought of Year 9. 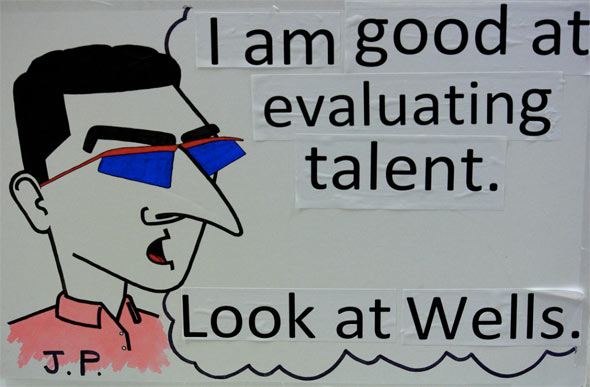 But I will return. I will make my way back to the dome next season, because regardless of whether the Jays win or lose, regardless of whether JP Ricciardi returns with his lies and his condescending smirk, there is something about baseball that transcends all of this. It's the crack of the bat on a warm sunny afternoon with the CN Tower overhead. It's John McDonald making one jaw dropping play after another. It's Aaron Hill stealing home plate to the shock of Yankee Nation. It's Roy Halladay showing the world why he is the best pitcher in baseball. It's the smiles of the kids that surround us on Jr. Jays Saturday. It's the bond I share with the person I love. It's the memories.

So this weekend, as the Jays wrap up their home schedule, head on down to the game. There will be a ticket waiting for you; this I can guarantee. You might not come home with the win, but at the end of the day, that's not what really matters. 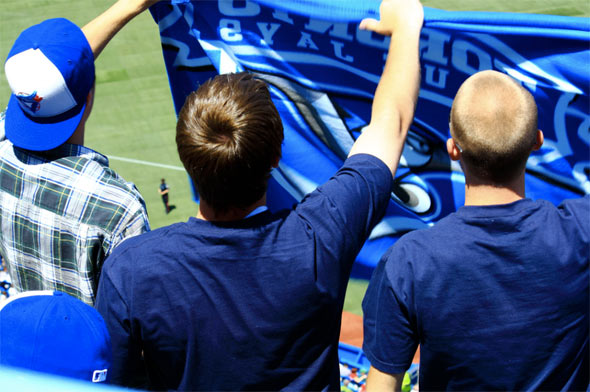 Mathieu Morin is an engineer by day, and a sports fanatic and photographer by night. You can see more of his work at his daily photoblog, View Found