The Best (or Worst!) Hills for Cyclists in Toronto

Toronto may be a relatively flat city, but that doesn't mean that there isn't quite the collection of tough hills for cyclists to climb. As an avid rider I often masochistically ascend these roads to test my fitness and prove myself a man (full spandex and all!). But, truth be told, going down them is almost always more fun. And, as a commuter on a single speed, I avoid them like the plague.

So in a gesture to the arrival of the Tour de France to the Alps, I've compiled a list of some of the ones I alternately love and fear. I'd be happy to add more to the map at the bottom if readers can think of some that I've missed!

Bayview Extension (north end)
Coming in at around a kilometer, this is long by Toronto standards. Although not overly steep, I like the view of Don Valley from near the top. Seeing the parkland below always makes me feel that I've accomplished something. 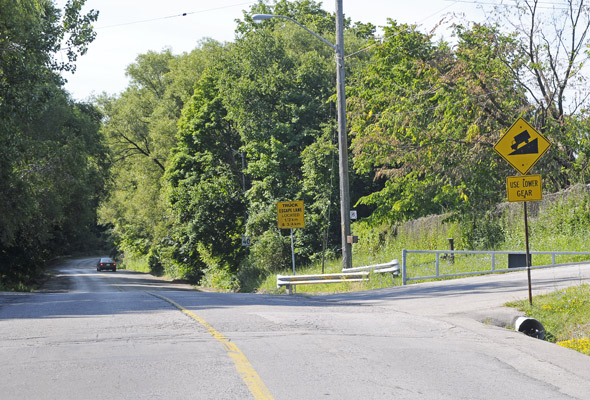 Brimley Road
Featuring bailout ramps for trucks that might lose control on its steeps, this is the toughest climb in the city. Longer than the rest, and plenty steep for Toronto, even hardcore cyclists will break a sweat on this one. Thankfully for commuters, Brimley isn't on the way to anything but Lake Ontario. But for those like me who like to ride down to the beach at Bluffer's Park, it's sure to be a suffer-fest on the way out/up!

Glendon Campus Lower Parking Lot
To climb this hill you need to break the rules and go up it the wrong way (it's a one-way heading east). But some might find the tree-lined road worth it for the switchback at the top. The sign there claims it's an 18% gradient.

Hogg's Hollow
Commuters in the north end know all too well that at Yonge and Wilson/York Mills all roads point up. For my money, I think the east side is the toughest to go up, and the most fun to go down.

Humber Valley near Old Mill
There's a number of ways to climb and descend in and around Humbercrest Blvd., all of which are exciting on the way down and challenging on the way up. 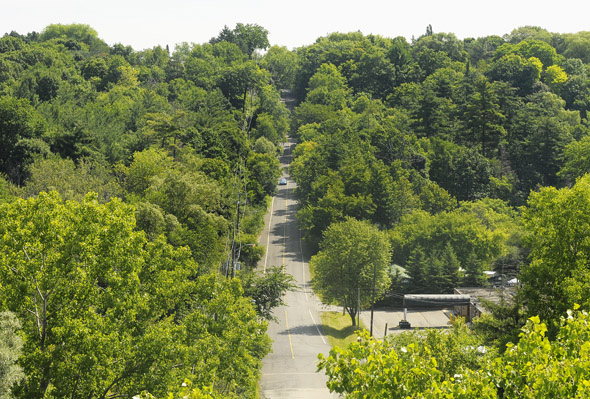 Lawrence Avenue East
When heading on Lawrence to the city's east end, I've often avoided the Bridal Path by riding down through Glendon's campus to where Lawrence resumes. It's definitely a short cut distance-wise, but damn this thing is steep. Straight and steep.

Poplar Plains
A great alternative to taking Bathurst north from Dupont, the bike lane makes this considerably safer, if a little steeper. The curves near the top of this hill have often allowed me to dream I was on a real mountain. Avid cyclists will enjoy going up Poplar Plains and down Russell Hill Rd. for interval training (and cornering work on the descent!).

Pottery Road
Currently undergoing some construction work, traffic on this hill can be a bit scary, especially when you're crossed-eyed from climbing. But, it's probably the fastest way to head out of this area of the Don Valley and into the city. 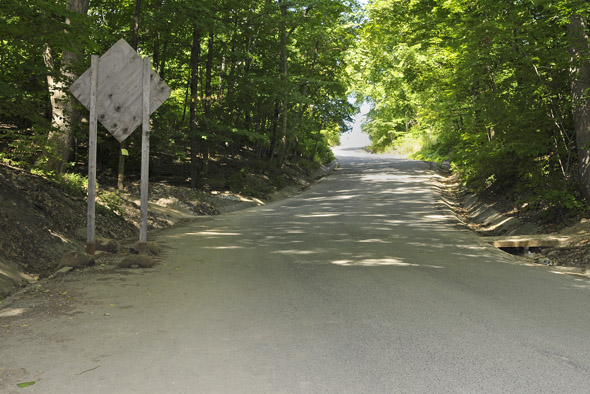 Redway Road
The steepest hill in the city, the service road down to the Sewage Treatment Plant has a gradient that tops 20%. This hill is as fun to descend as it is hard to climb! In a misguided display of bravery, I once hit 78kph on the way down. Happy to be alive, I won't do that again! Watch for mountain bikers using the road to pass between trails along the ravine wall and the corner at the bottom.

Sunnybrook Park/Hospital
This isn't a particularly steep climb, and the canopy of the trees keeps it nice and cool. When I cycle around Sunnybrook, I often take this route out of the park and onto the city streets. It's quite pretty and a great place for novice cyclists to get their climbing legs.

Rattlesnake Point
Although not in Toronto, whenever I'm looking to test my mettle (or kill myself!), I'll head out to Milton to climb this monster. Used for the Provincial Road Championships a few years back, this is as close as it gets to an alpine climb in the GTA. Sure, it's not as long, but with multiple switchbacks and a crazy gradient, this is an absolute leg-breaker!

View Hills for Cyclists in Toronto in a larger map