Some Toronto area bands who have entered include God Made Me Funky (GMMF) and The Shuffle Demons, who broke the Guiness World Record on May 30, 2004, for greatest number of sax players playing one song, when they gathered 930 saxophonists to simultaneously play the Hockey Night in Canada theme.

Ontario has 5661 submissions out of nearly 15,000 total entries. That's well above any other province, so there's a better-than-average chance of the winning submission coming from Toronto if there's any quality among the quantity of entries.

Among the more amusing entries is Hockey Scores (video above) by Logan Aube of Aurora, Ont. Currently with over 140,000 views and 94 pages of comments, it appears to be top contender.

Although the finalists are picked not just by popularity, but overseen by a producer and judges. Veteran Canadian producer Bob Rock is supposedly part of this selection process.

Other Toronto entries include Hockey Fans Unite from Clara Lofaro and OMG It's HNIC by Dylan Bell of Retrocity. Other song titles are rather amusing: Concussed, Battlestations,Bladiator, CTV Eat Your Heart Out and my personal favourite, My Other Car is a Zamboni. 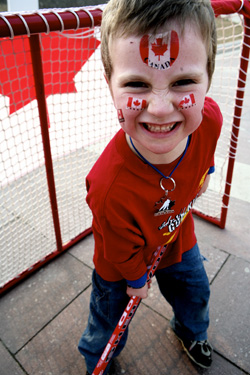 The original HNIC theme was called Saturday's Game and was a march composed by Howard Cable. It was later replaced by the CBC and MacLaren Advertising with the Esso Happy Motoring Song.

In 1968, a new theme was commissioned, simply called The Hockey Theme, composed by Dolores Calman and arranged by Cable. This theme's license expired after 30 years at the end of the 2007/2008 NHL season. The renewal of the licensing agreement couldn't be reached, and thus the reason for this contest.

Aside from the glory of the winner's theme being broadcast during a key part of the program during every Hockey Night in Canada show for the 2008/2009 season (and possibly beyond) there is a $100,000 prize involved.

Half of the royalties for public performance of the theme will be also be paid to the winning songwriter(s) with the other half to be donated by CBC to minor league hockey.

GMMF's Hockey Night on CBC is one of the few selections with lyrics.

I asked GMMF singer/songwriter Kevin Brathwaite about their entry and he said that creating the song was an interesting process.

"I had heard about the contest and my wife told me that we should do something for it, but never really paid any mind to it," said Brathwaite. "Then one Sunday, The Toronto Star had an article on how to write a winning song (strong hook, high energy) and simultaneously on CBC, there was a commercial promoting the contest.

"My wife then reminded me that we should enter the contest and I agreed. I went to take a shower and the melody and the music and the yelling of Hockey! in the chorus came to me. Over the next few days, I tweaked the lyrics and had the song. From the submissions I've heard, most of them are instrumentals so there is really no comparison. I would just love to be a part of Canadiana and win the whole thing."

If all else fails, there's always The Hockey Song by Stompin' Tom Connors, who has made it be known that he is open to an appropriate licensing offer.

Watch The Hour each night next week at 11 p.m. Starting tomorrow, they'll be announcing one of the top five semi-finalists each evening on the show. You get to vote for your favourite hockey anthem among the finalists starting October 4.