What with surfers and polar bear dips a plenty, I'm beginning to think more people swim Lake Ontario in the winter then in the entire summer.

A few kilometers West of Sunnyside was another, very different polar bear dip today. The 23rd annual Courage Brothers' Polar Bear Dip at Oakville's Coronation Park. Over 400 dippers participated in the event that raised over $59,000 for World Vision water projects in Sudan.

Although I didn't dip, I can't imagine feeling any more freezing or "reinvigorated" from just standing on the beach. With a strong breeze and foot and half waves (I might be exaggerating, but not by much take a look at the photo), it wasn't quite the right conditions for my first polar bearing experience.

As expected, funny costumes and flags were abound, but my favorite had to be a shirt worn by a pair of dippers with "No Shrinkage" on the back (photo after the break).

Hard to believe the whole event began with a handful of friends daring each other into the lake. This year featured over 4000 spectators, live music, hot tubs (for the brave swimmers after their dip) and free soup! An added bonus, the event is now so big they need to do two waves of dippers about 20 minutes apart. I didn't think I needed a second demonstration as to why I wasn't going in the water, but it was just as enjoyable to watch a second time. The major disadvantage though might be it's success. The frenzy and media attention makes it a tough place to view the actual dip, I suggest maybe visiting Sunnyside with Nancy next year or get there super early. Then again, you could always just swim it. Better you then me.

In case you are thinking about doing it next year, there is a lot of medical staff on hand (including two gentlemen about 50 feet out in the water) and people of a wide variety of ages participate. This year included a $25 sign up fee and sponsors are encouraged.

Rick Mercer (pictured below left) and crew joined the crowed while filming for an upcoming episode of The Rick Mercer Report. Not to spoil the surprise, but yes, Rick did strip down to a bathing suit and run into the lake. Apparently that episode will be airing January 15. 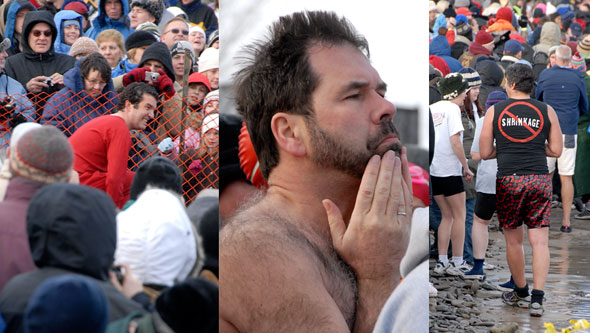