It seems that the Blue Jays have returned into the social consciousness of this beleaguered baseball city. The stadium formerly known as SkyDome held a near-capacity crowd of 42,162 last night on a cloudy but reasonably warm Tuesday evening. Was it BoSox starter Dice-K's much-hyped Canadian debut, the masses of New Englanders here to support their team, the allure of Toonie Tuesday tickets, or is this city really excited for their MLB team again? 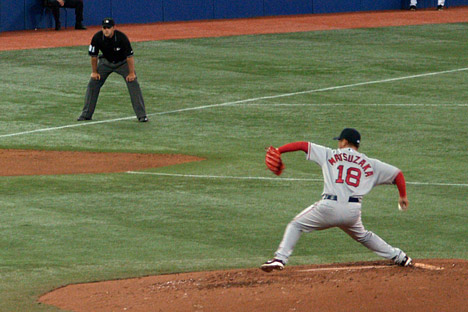 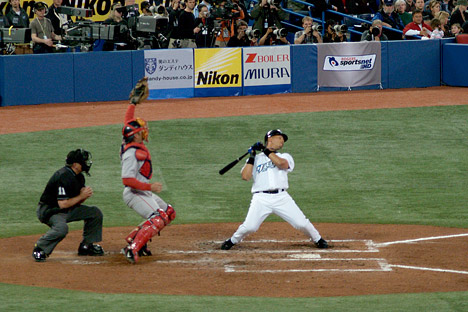 I knew 5 friends (none of them are diehard baseball fans) and several blogTO personnel who attended the game. None of them really knew each other, and we were all sitting in smaller groups in separate sections. Maybe we can chalk this one up to coincidence, but a quick glance around the bleachers indicated to me that going to a Jays game is no longer something that we have to hide in shame from our friends. It wasn't the size of the crowd that impressed me. It was the harmonious mix of youngsters, hipsters, oldsters, beer, peanuts, and foul balls arcing over our heads. 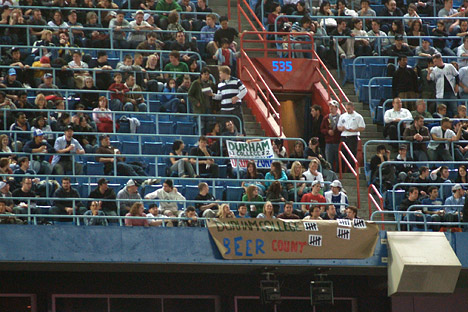 The team this season looks stronger than the last. Newcomers include Tomo Ohka (4th Starting pitcher), Victor Zambrano (Relief pitcher, could be used as a starter), Royce Clayton (SS, journeyman, played for 10 MLB teams), and the Big Hurt (aging but intimidating DH). It even looks like Aaron Hill has his confidence back as he leads the team in batting average and made several clutch fielding plays last night. If the Jays can stay healthy (injuries to closer BJ Ryan, 3B Troy Glaus, and LF Reed Johnson), the Jays have a decent shot at the post season this year.

The Blue Jays won the game 2-1 with a stellar pitching performance by Gustavo Chacin, to take the lead in the AL East.