It's Friday night. It's cold, and it's snowing. For those not in the know, these are two elements that typically put a bit of a damper on skateboarding.

But not, thankfully, on a skateboard party. Skateboard Canada hosted its annual release party at Lee's Palace, and it was a humdinger of an event. Tons of free stuff, the debut of some new skate vids, and an appearance by the Pillow Fight League made this an event worth checking out, even if Mike Rotenberg and I had to venture out into the snow to get there.

While at the party, I managed to catch up with my old Sudbury friend and Managing Editor of SBC, Ryan Stutt. 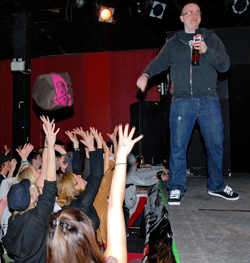 "Skateboard Canada's mandate is basically to blow up young Canadian skateboarders. But we have a mix, we tried to keep the focus on Canadian talent as much as possible; but a lot of people still want to hear about pros, and those tend to mostly be American."

There was also the debut of two new skate videos to be seen. The first (my favorite) was a new Santa Cruz documentary entitled V-Day. The video takes a look back on some the old pros like Eric Dressen and Tom Knox, mixing old footage and music in with other pros talking about their experiences with the honoured.

Also debuted was the Vancouver-focused Bigger and Better Things, Ben Stoddard and Dave Ehrenreich's video which features a full roster of talented peeps currently living on the West coast.

While I didn't get to stay beyond the first PFL match (which was awesome), I wondered why Ryan chose to include them in the nights festivities. "I didn't want to make like 200 gallons of Jello like we did last year, so we got the PFL in to beat the shit out each other for your enjoyment." Ryan was also one of the guest judges for the event, a job I think he enjoyed a lot!

There were even a few noticables I spied on the guest list; including Rob Dyer of Skate4Cancer, and Jimbo and Mike, co-owners of Shred Central (the only indoor skatepark in downtown Toronto).

Big props to Mike for coming by and shooting the photos, which should be updated shortly.