Along with a lot of other people who were fortunate to have a free Wednesday, I spent the day ambling about the city and taking in some rays. I'm not as anti-winter as some, but I'll admit there's no substitute for a blue sky and a warm sun. As I walked into the sun-soaked Nathan Phillips Square I saw that the skating rink was surrounded by the kind of fences that only go up when there's a game afoot. Since the warm weather allowed me the luxury of taking my time outdoors, I walked a little closer to have a look at what was going on.

Before long I figured out I'd walked into a media release announcing that Toronto had launched a program for people with disabilities called Toronto Sledge Hockey in the Neighbourhood. The event took advantage of the perfect mix of winter activities and spring weather to showcase a game about which I'd previously known next to nothing.

Not only was the event good news for local sports and disabilities programs, but it was also an excellent showcase for the game of sledge hockey itself. With the players sitting on modified snow sleds and using two sticks both to control the puck and propel themselves forward, it requires a high degree of skill and co-ordination.

There were lots of kids there learning to play the game, and they were joined on the ice by Mayor David Miller, Renato Discenza (a representative of corporate sponsor Bell Canada), and three members of Canada's gold-medal winning Paralympic team, Paul Rosen, Billy Bridges, and Bradley Bowden. 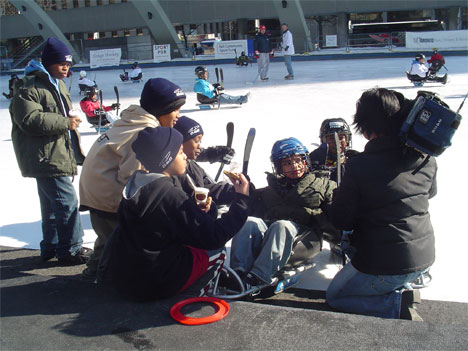 Watching the mayor scoot around on his sled and try to pass to professional players was a funny way to spend half an hour of my afternoon, but it was well worth it (and the mayor demonstrated some pretty decent skills, too). The parents and curious on-lookers definitely got into the game, and there were even the requisite shouts of "Old time hockey" and "Eddie Shore" when the players started bumping each other.

One of the most interesting comments I heard was that sledge hockey was one of the only sports in the world that allowed disabled and non-disabled players to compete at the same level in the same game. The mayor was quick to point out that it fits in nicely with the city's goal of achieving equality among all citizens, regardless of their physical capabilities. Here's hoping the program helps us inch a little closer to that goal.