I remember when I was 8 years old, thinking that when I grew up I wanted to be a professional video gamer. Well, either that or a professional ninja, but life is filled with choices. The DorkARMY have been waging war against all who oppose the spirit of gaming since they started hosting Local Area Network (LAN) parties in their basements years ago. Nowadays they host the monthly event D-Day at The Gladstone Hotel wherein the pros battle it out against the Covenant in the Canadian Game Pro League (CGP) for big prizes, and the noobs get to play some Duck Hunt and Guitar Hero over a glass of Keiths. I caught up with General Error, aka Stephen Kriedemann, to ask him a few questions about what DorkARMY plans on doing with the world once they have it under their control.

--
BlogTO: What is the Dork Army's mission?

General Error: World domination through gamer mobilization! We aim to promote the growth of the Canadian gaming community, and increase the profile of professional competitive gaming here in Canada and abroad.

BTO: The Gladstone wasn't always the army's main bunker. Where were the original trenches, and why the move? 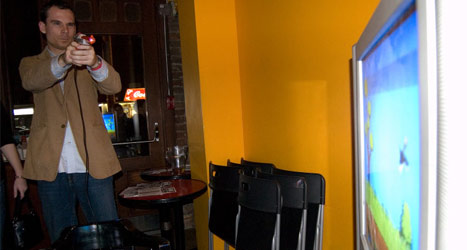 : We're really more of an elite mobile tactical response unit. We've had a number of homes, and done events all across Ontario. A couple of years ago we ran a bi-weekly series of events at B-Sweet, which is now Dragon Fly on Queen St. west of Dufferin.

We've always tried to maintain our mobility though, as this allows us to get involved in PC LAN party events all across the province in search of great Canadian talent. We find that fresh talent everywhere... and we've been everywhere; Whitby, Aurora, Oshawa, Keswick, Port Perry, Richmond Hill, Markham, and Thunder Bay!

Why do we change venues? Situations change, and we've experienced growth during the life span of our company. We love the Gladstone and we have a great relationship with them, but we are fast running out of space for the crowds we have gathered for our CGP series, and we expect that crowd to grow for next year's series! Where will the CGP 2007 battlefield be found?

BTO: Any standout soldiers on the squad?

GE: Well, we've seen the best Canadian Halo talent out there at our various events over the years, including our friend G-Spot based out of Ottawa, 2 time Canadian World Cyber Games (WCG) Champ as well as 2 time WCG World #2 (Halo 1v1 & Halo 2 2v2). He's the star of Canadian gaming, always a champ and a class act.

Currently vying for his crown we have a few strong up and comers. First off would have to be MaD MaX who plays for our Team DAM - dorkARMY Militia. This kid, at 16, or 'Beast' as he is known by his friends, is on fire. Currently sitting atop the CGP league standings, he is one of only 2 of the 80 registered and ranked players who have managed to amass over 1,000 kills. He recently got a flash of his future fame, joining his Team DAM partner Alpha XFactor and I for an appearance on MTV Live. Alpha himself broke away from Halo long enough to earn a berth at the WCG Canadian Finals for 'Dead or Alive 4', in which he finished 2nd, which didn't get him a trip to the World Finals, but still proved some versatility in his gaming career. Right behind MaX, having a great season is TRU3, a 17 year old who is really having a breakout year, making more noise and more of a name as the season progresses.

BTO: Where do you see pro-gaming in 10 years?

GE: I hope to see pro gaming here in Canada reach the levels it has already reached in Asia, where pro gamers earn $100k a year and the fan base for eSports is huge. They have television stations devoted to gaming coverage and footage, making gamers true stars. I want to see the average Canadian know that there is such a thing as professional gaming, and maybe coming out to see what's up. In the US they are starting to catch on. Recent coverage of TSquared and the $450k he has won gaming over the last couple of years is raising the profile down south.

We need to take gaming more seriously here in Canada, supporting our Canadian gamers as they compete on the world stage. I want parents to look at their kids competing in a pro gaming tourney as if they were competing in a pro hockey tournament. That's when you will see pro gaming explode here. It takes one big break, like the X-Games, to break new ground and show a new subculture the light of day.
--

DorkARMY infiltrates The Gladstone Hotel on the second Saturday of every month. Halo 2 CGP League play starts at 11am and runs until 8:30pm or so. Entry is 25$ while spectators pay 5$, and this Saturday's event is the last chance for anyone who is unseeded to land a spot in the CGP League finals starting in January.

From 9:00pm until 1am is when DorkARMY breaks out Guitar Hero, Dance Dance Revolution, Duck Hunt, Super Smash Bros Melee, and many other games for everyone who pays the 5$ entry fee (spectators who paid the 5$ earlier in the day are covered). I've had some ruckus times jamming to Iron Man on medium difficulty, and then switching over to Geometry Wars on the Xbox 360 at past events, and I'll definitely be there again to kick @$$ and take names this Saturday. Uncle Sam wants you in the DorkARMY barracks.