Wynona doesn’t have anything to do with the Judds: rather, it’s a breezy seafood, pasta and wine restaurant from Jeff Bovis (Ufficio).

Though the menu consists of plenty of crudo and fresh pastas, everything made from scratch in house, unlike Ufficio it’s not entirely pescaterian. An Ontario pork chop takes its place at the very bottom of the page. 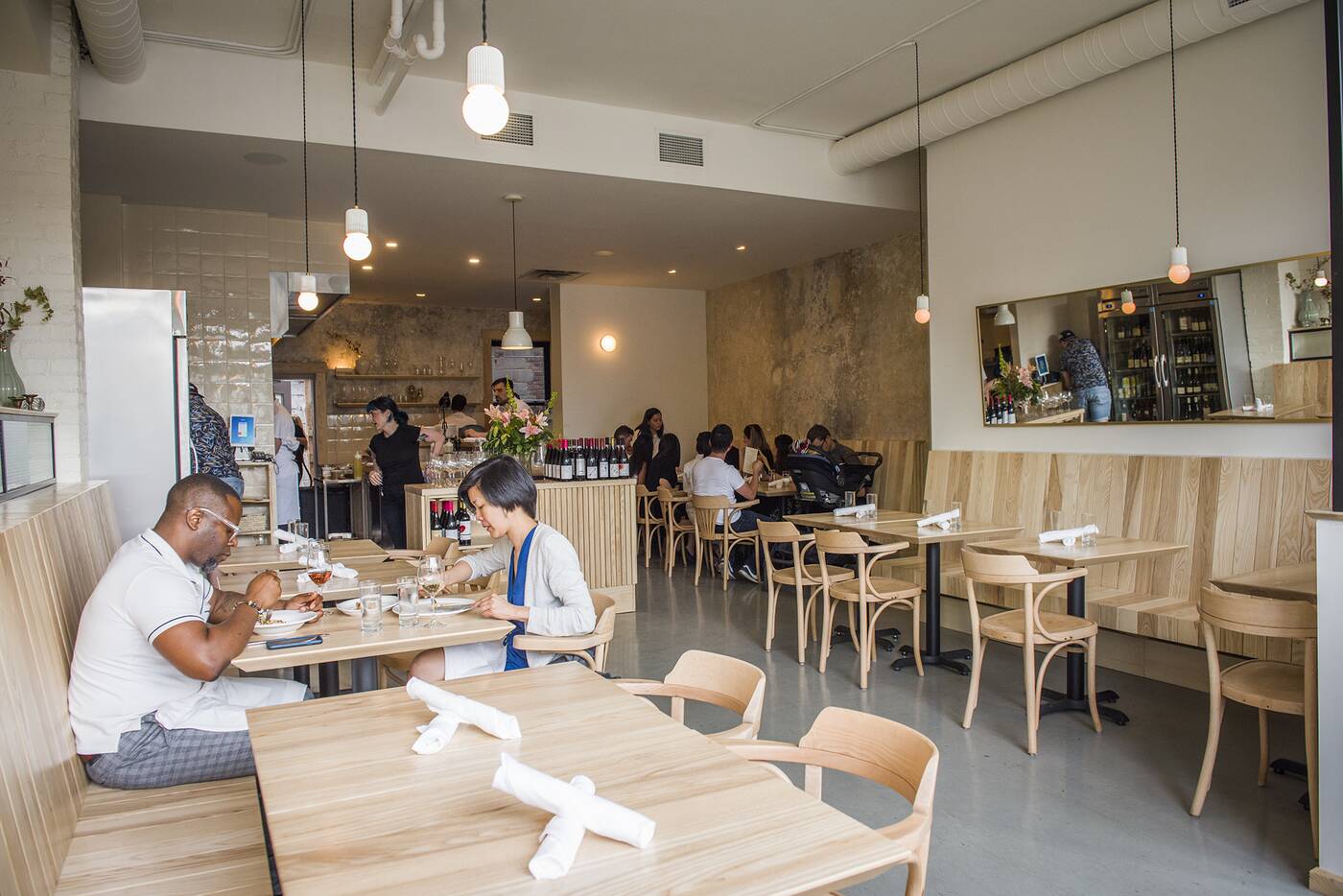 Bovis chose the name Wynona just because it was pretty, feminine and looks good written down. 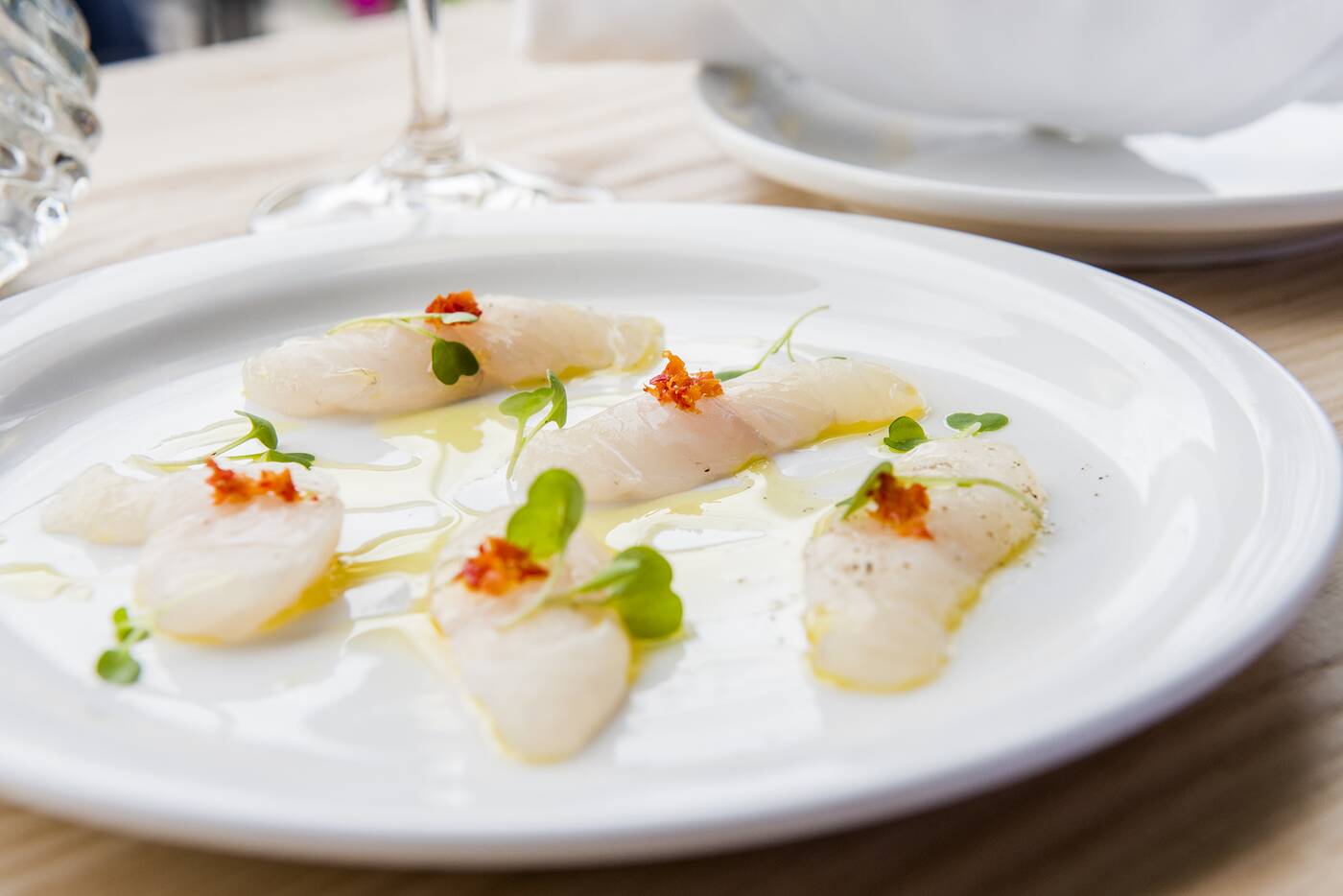 A fluke crudo isn’t on the soft opening menu, but they’re trying to do as much crudo as they can here, and the soft, silky fish is beautifully woken up by a tart fermented lemon koshu and a little bit of chili, brushed with a pear vinegar. 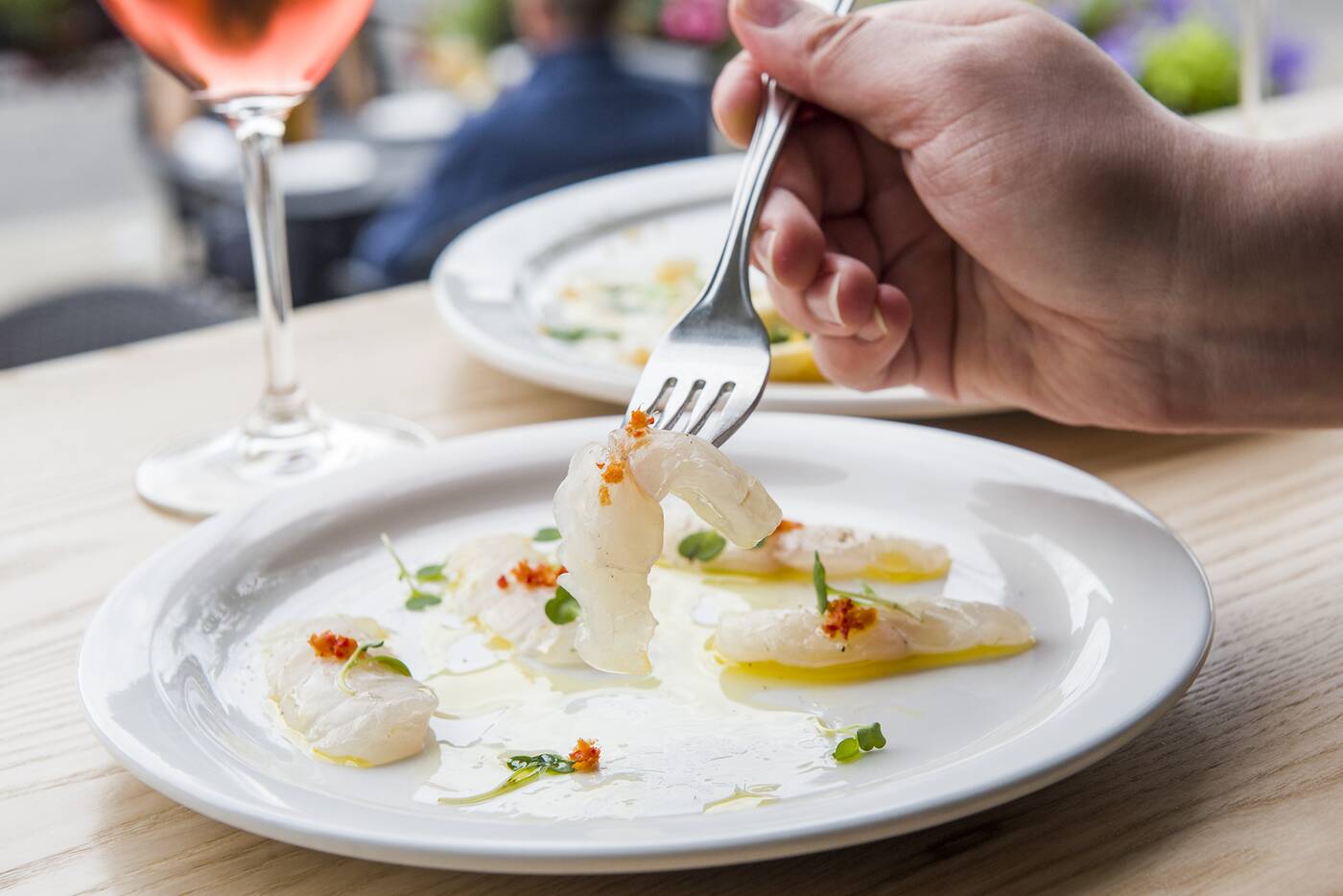 It’s finished off with a luscious Leccino olive oil produced from a single varietal of olive (touching on the wine theme), some perky little arugula seedlings and just a touch of pepper. 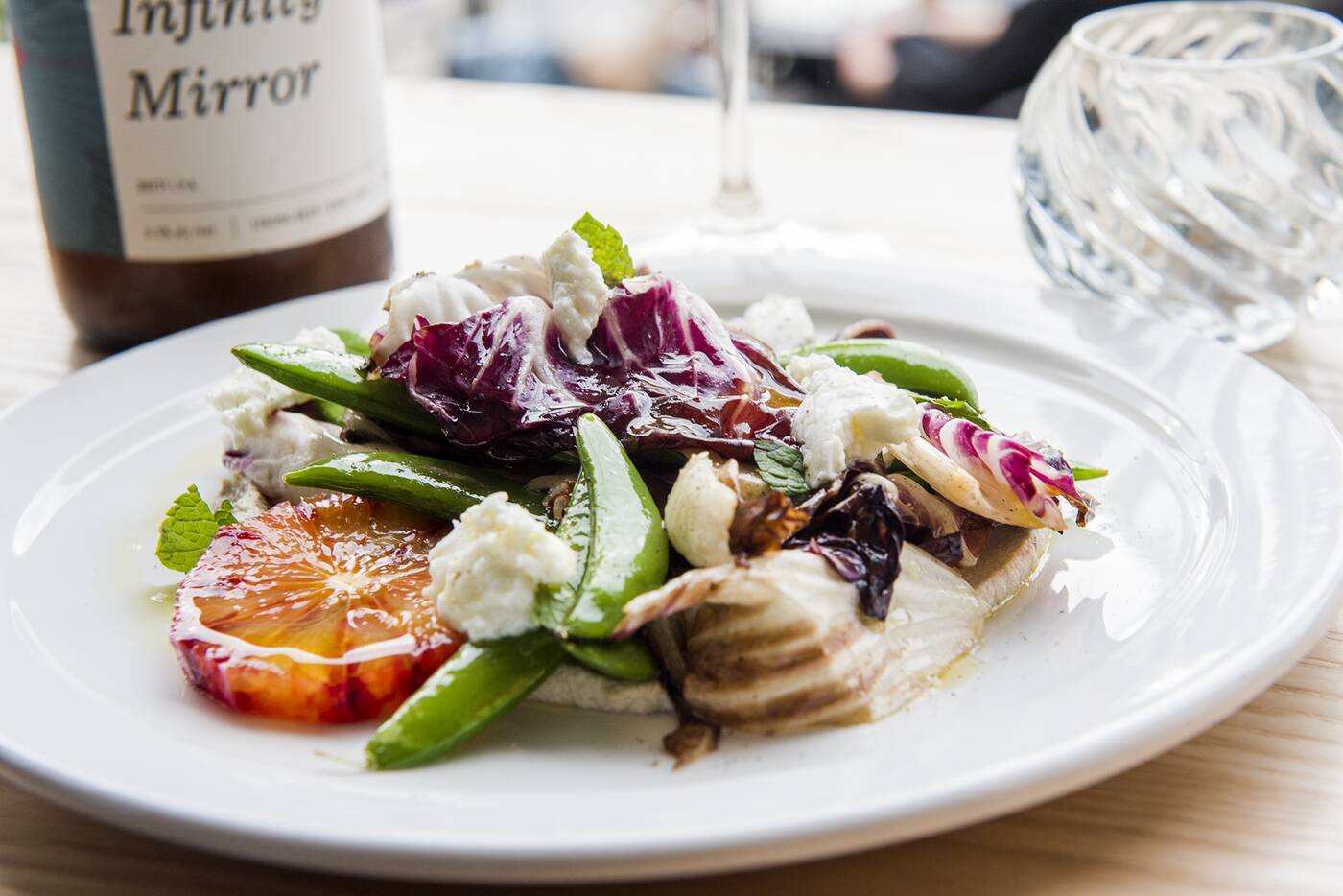 Sunflower seed puree ($15) provides a base for an Italian-leaning salad of radicchio and blood orange with local Monforte water buffalo fresca.

Sunflower seeds are simply toasted, soaked and blitzed for the nutty puree, which could easily stand on its own as a dip with glistening, firm and grassy snap peas. 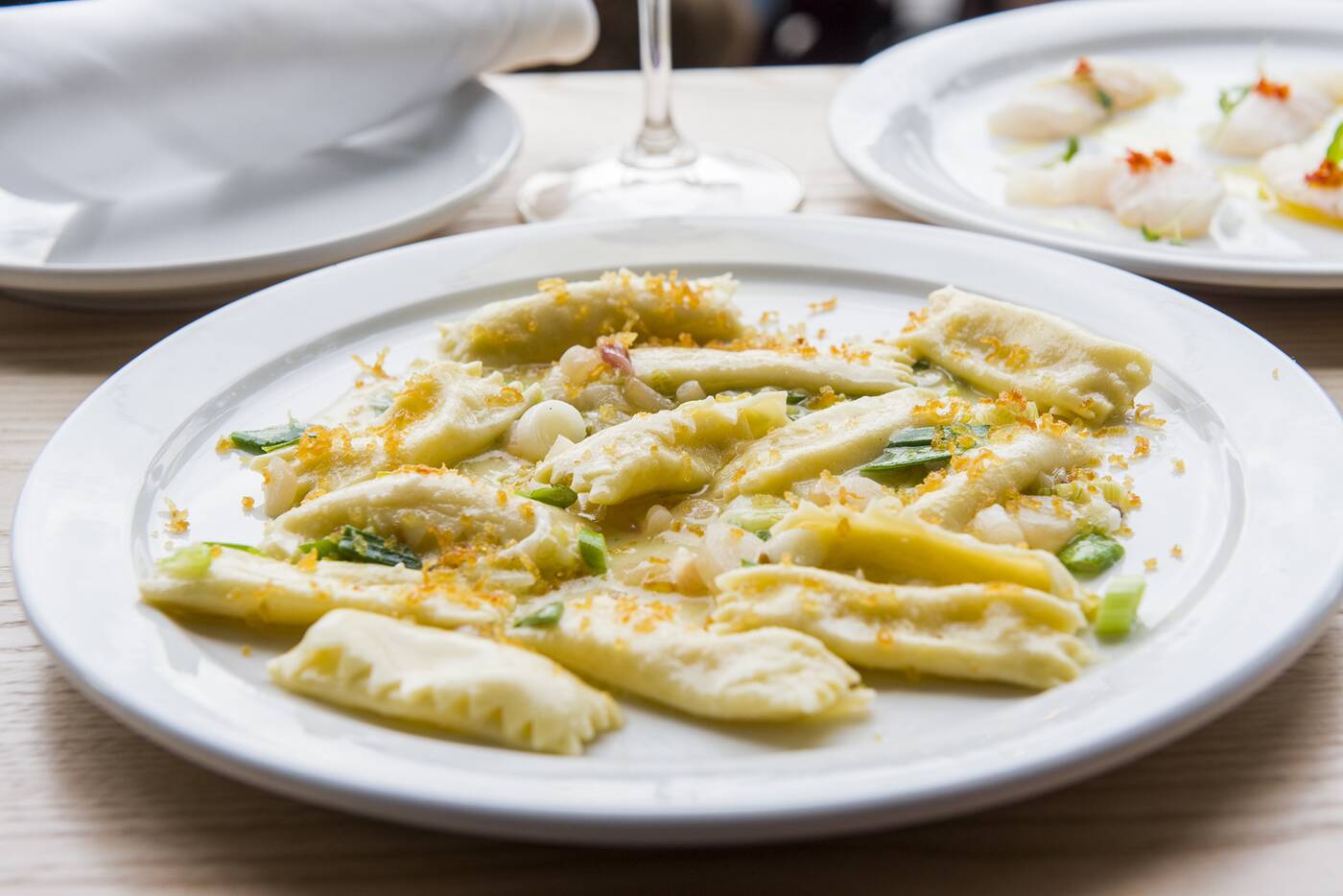 Rutabaga agnolotti ($18) are filled with a rich and starchy mix of rutabaga puree and fluffy ricotta, house pickled ramps scattered amongst the pasta. 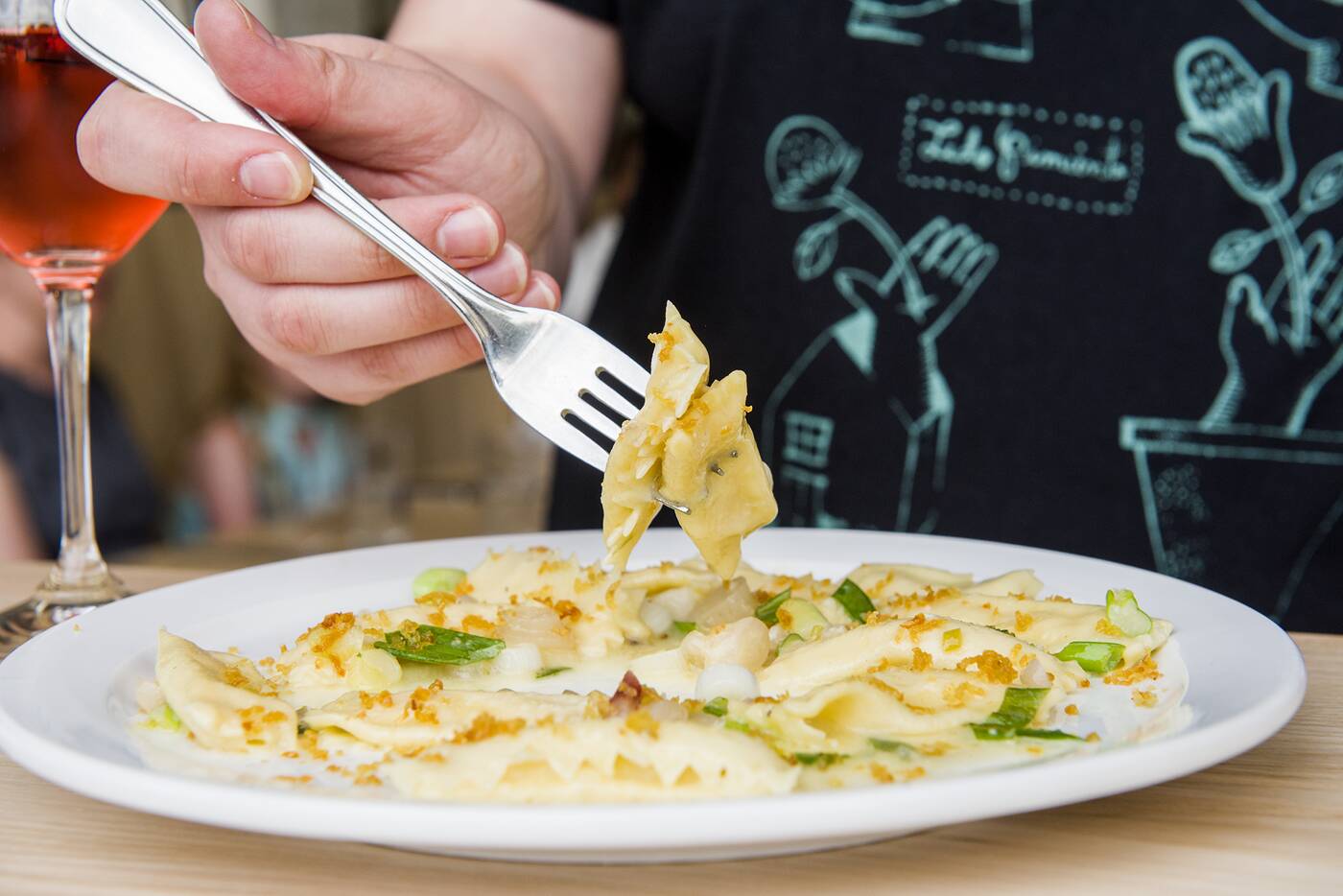 Ramp butter ties everything indulgently together, a potato crumb on top enhancing the butteriness even further and adding texture. 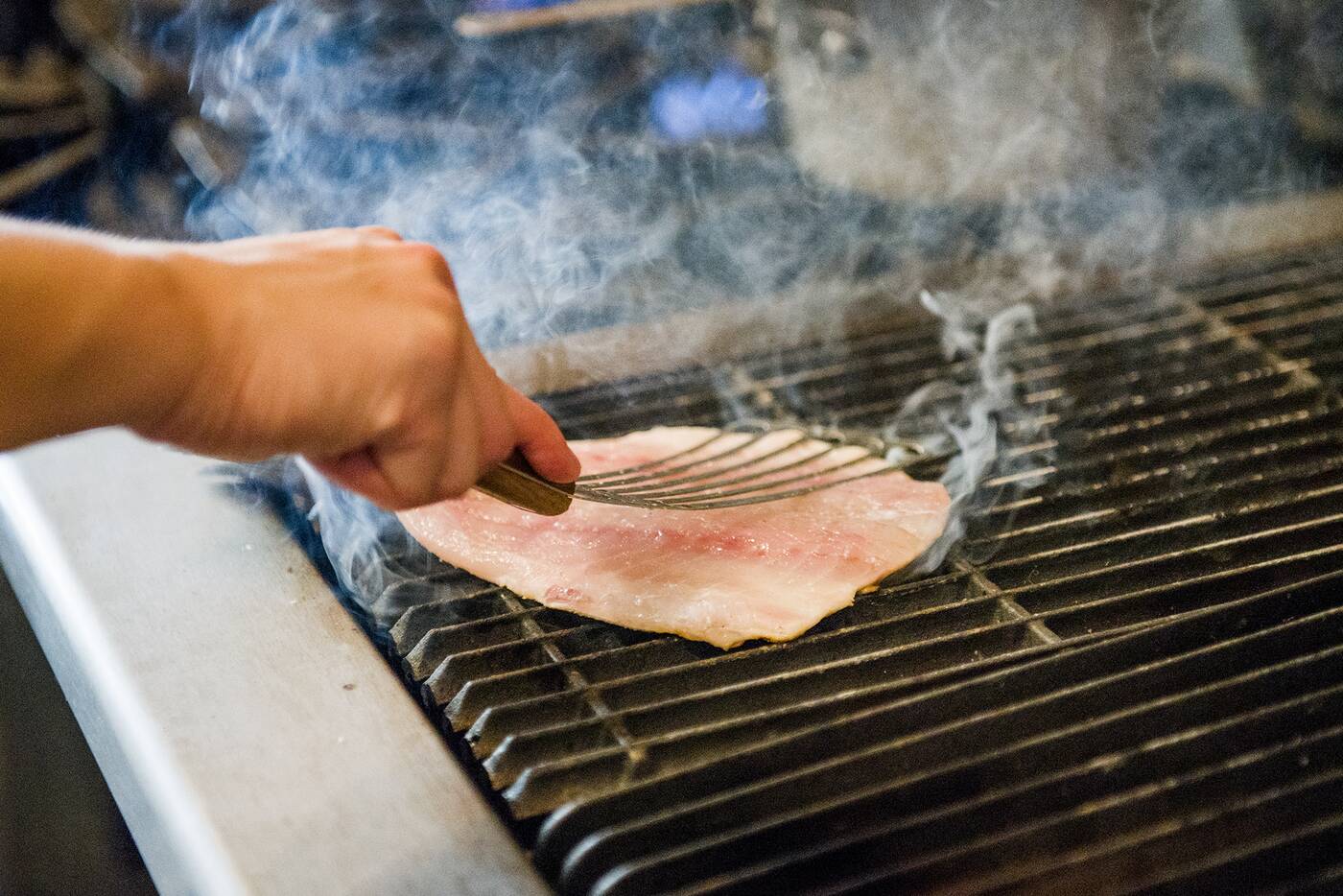 Whole branzino ($26) imported from Greece has been deboned completely except for one bone running down the middle, which ensures the whole construction of delicate skin and flesh doesn’t fall apart. 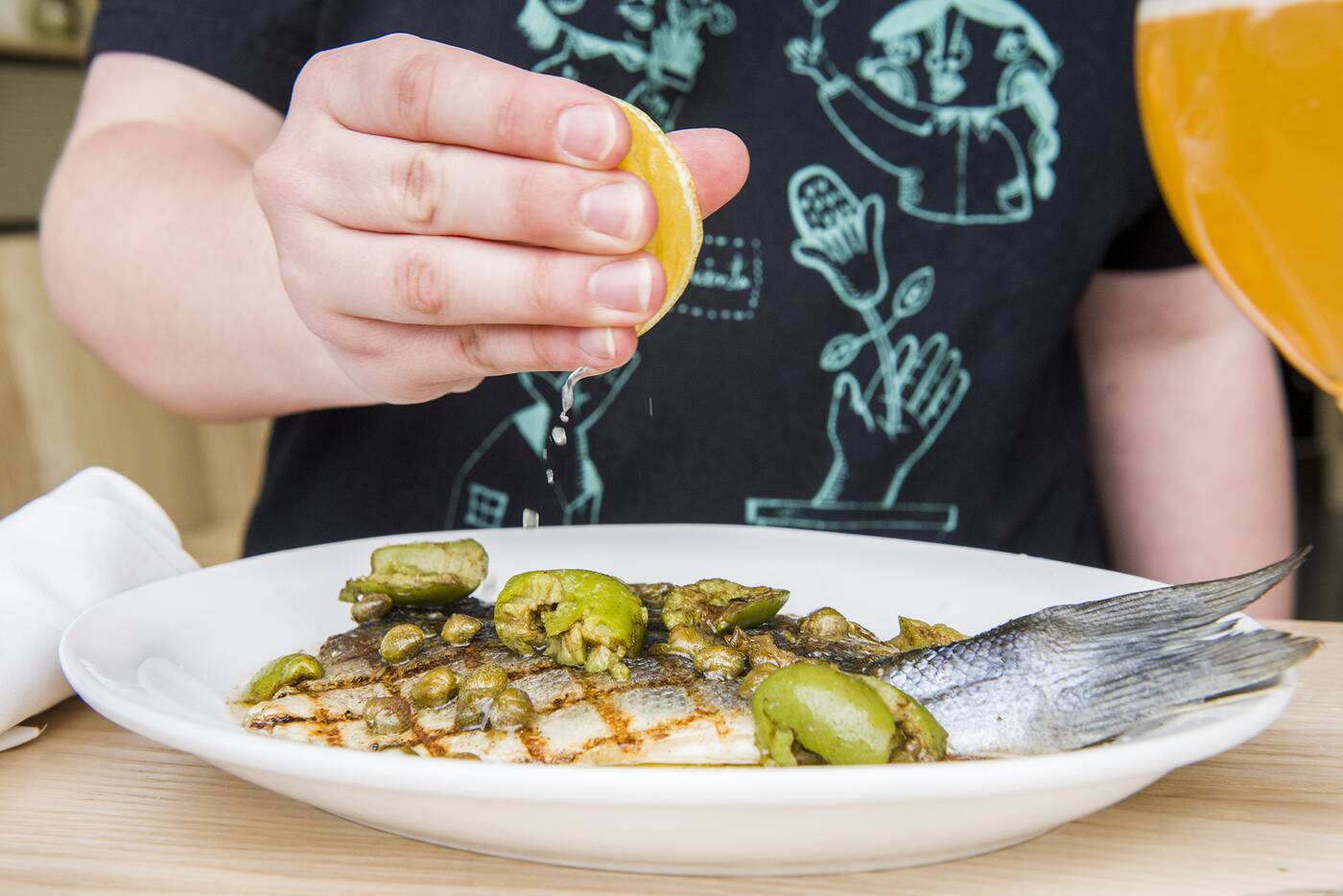 Grilled and also served in a deeply sumptuous brown butter sauce, the satiny fish tears into light chunks easily, accented by almost crunchy capers and Cerignola olives, the meatiness of both soaking up the buttery sauce and smoky, briny fish flavour. 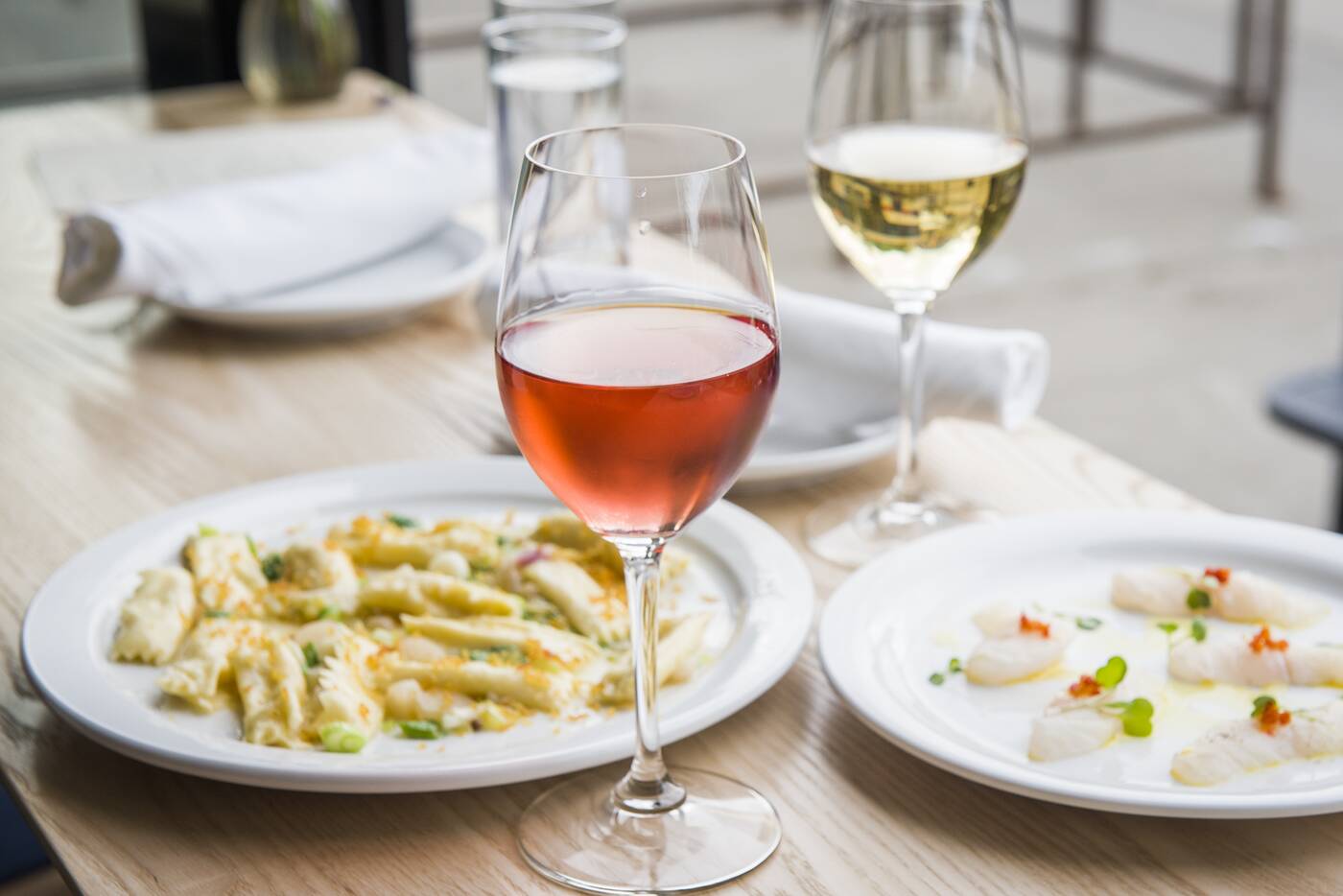 The Melon de Bourgogne ($16, $80 for the bottle) goes well with our meal, a muscadet with lots of minerality and salinity to cut through all the oil and butter.

A glass of organic and biodynamic Italian pinot grigio ($15) comes from the innovative “contact” section of the wine list, where unique wines somewhere between a white and a red can be found, “contact” referring to the skins being left on wine grapes for texture and colour. 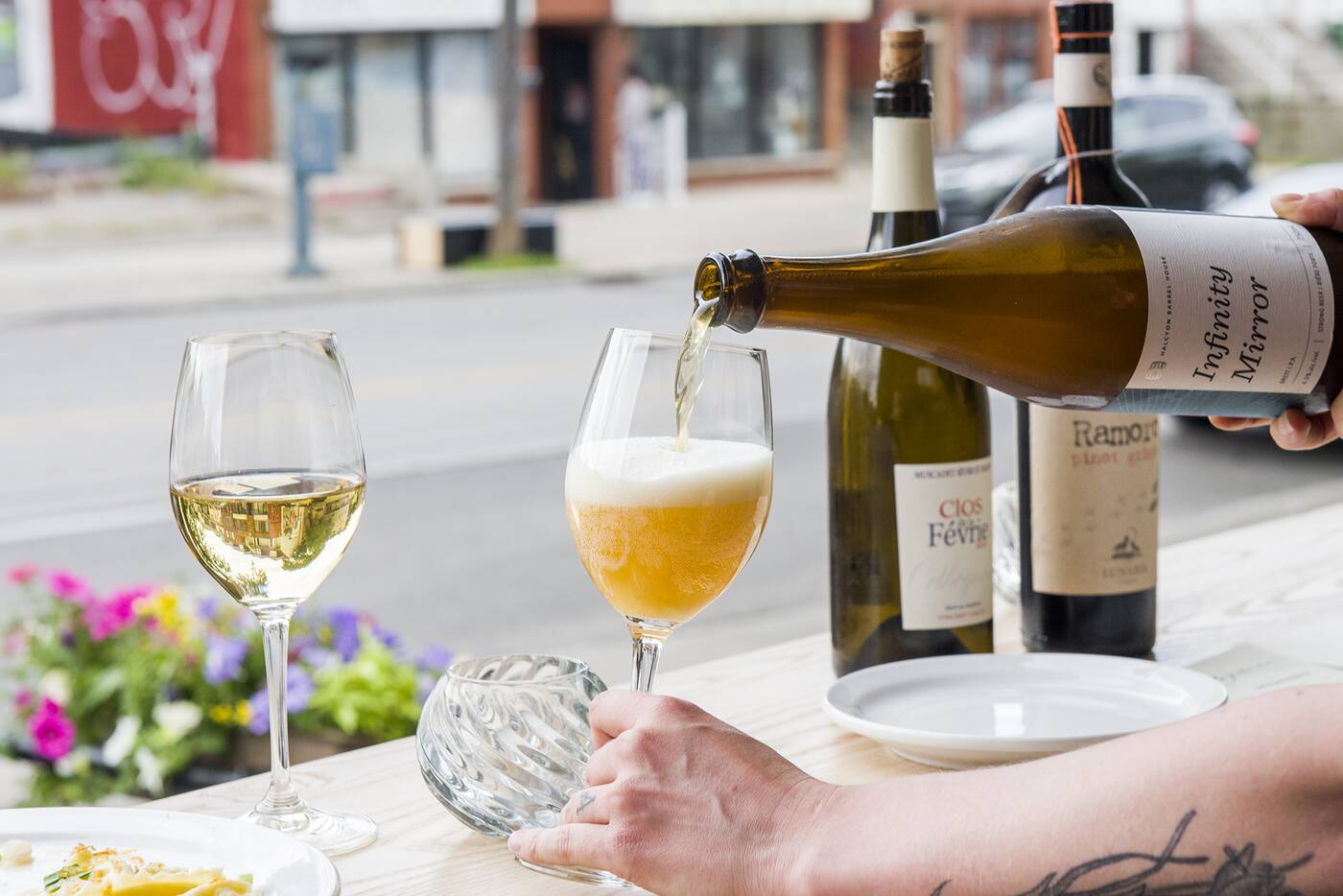 The Infinity Mirror Brett IPA ($25.50 for a wine-sized 750 mL bottle) from Halcyon, an imprint of Beau’s, is part of a small selection of local beers. 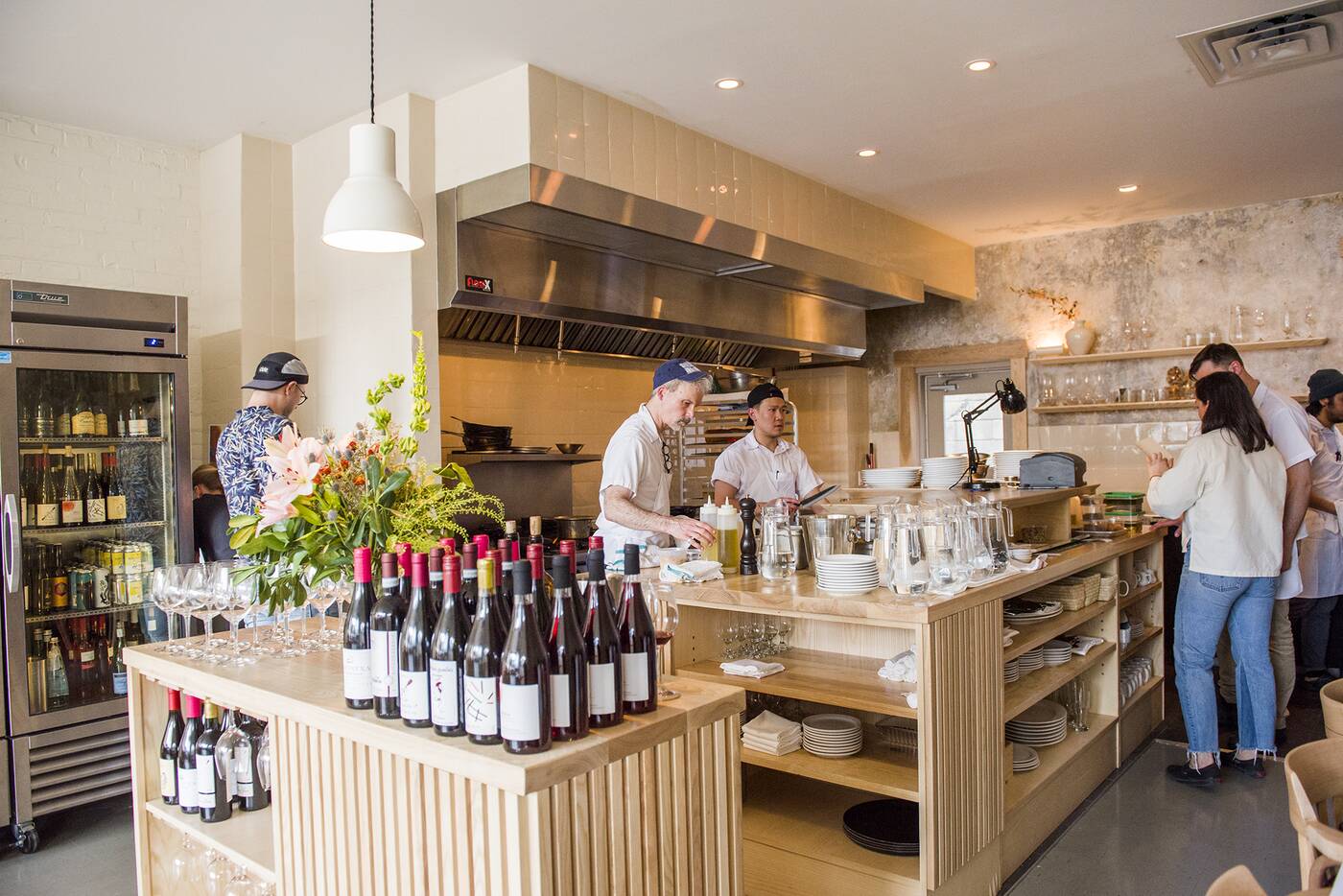 Fresh interiors designed by Bovis himself are high-ceilinged with a huge open front window, open kitchen and light wood from Hamilton’s Barnboardstore. 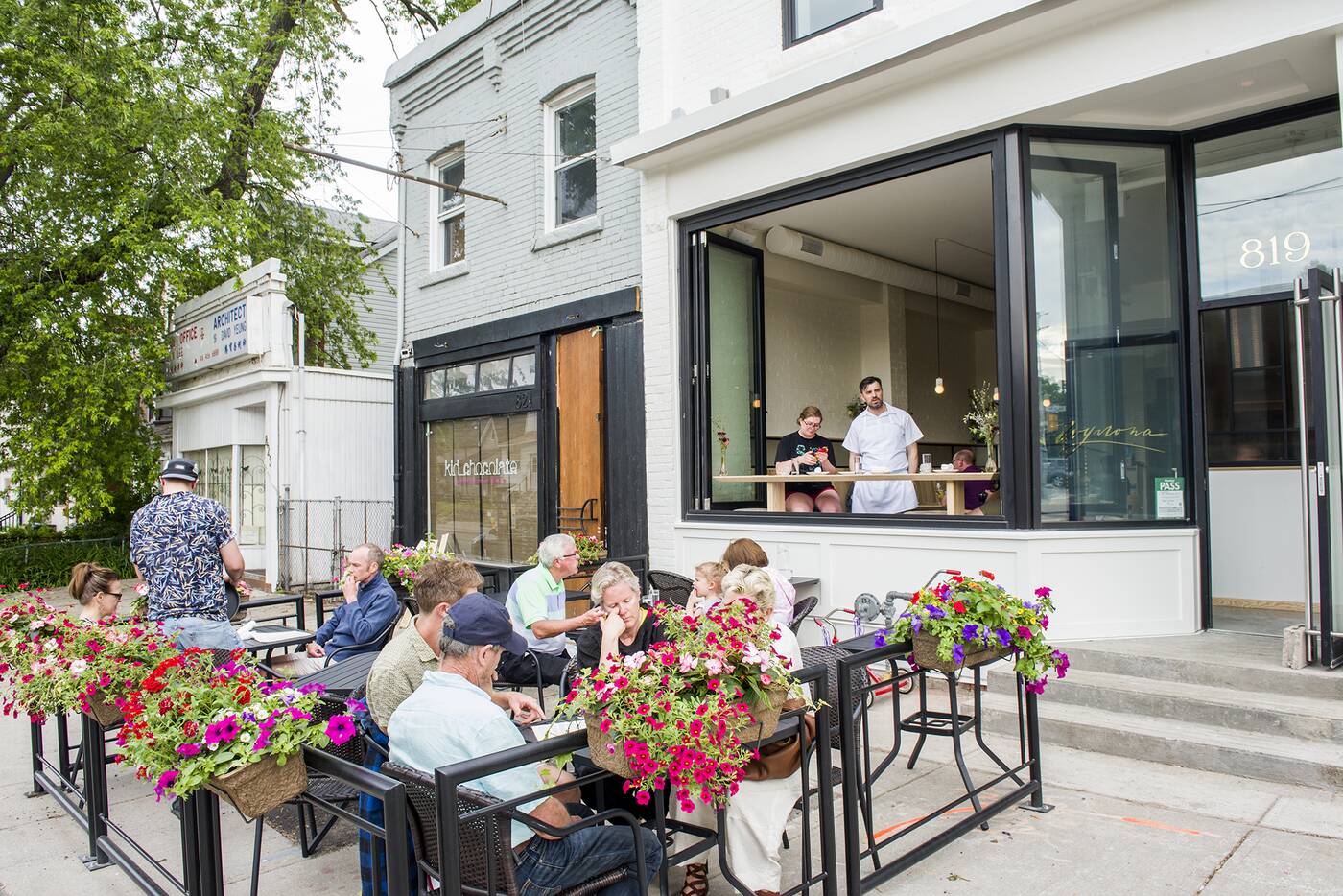