Umi Sushi Express is currently open but their offerings and services may be affected due to the pandemic. Please contact the business directly for more information about any changes. Is this your business? Please contact us if you would like to update this message.

Umi Sushi Express innocently calls it a bonito hot dog. As I stand amid a teeming mass of hungry Financial District suits however, my disbelief at what I'm seeing gives way to excited familiarity.

Yes, ladies and gentlemen, on the heels of Vancouver's signature Asian street meat finally announcing plans to expand to Toronto this year, the Big Smoke is welcoming its first official (as far as I know) Japadog knockoff. And it's in the food court of the TD Centre.

Smack dab in the middle of its menu though, which mainly consists of prepackaged sushi rolls and bento boxes, one finds the ever elusive Japanese style hot dog.

Two permutations are on tap; a teriyaki option featuring onions, teriyaki sauce and mayonnaise; and a bonito variety that adds a heap of dried, fermented tuna shavings to the party.

The lack of variety may leave many Japadog fans wanting, but East of British Columbia, beggars can't really be choosers.

The girl at the cash register looks mildly surprised when I order a bonito dog ($4.49), then informs me it will take 5-10 minutes for the item to be prepared. I'm guessing they don't sell a lot of these puppies?

I order an 8 pack of spicy salmon rolls ($4.99) to tide me over during this wait and find it to be unspectacular. The rice is slightly dried out from refrigeration and has the texture of tiny pebbles. The fish itself is inoffensive -- not fresh but not fishy -- and doesn't taste frozen, which is a plus.

All things considered, you could do much worse than mediocre while wandering the path for raw seafood. Take that for what it's worth I suppose, but I've always been of the mind that fast food sushi is like asking Ferrari to build a sub $15,000 car; would it really even be a Ferrari? 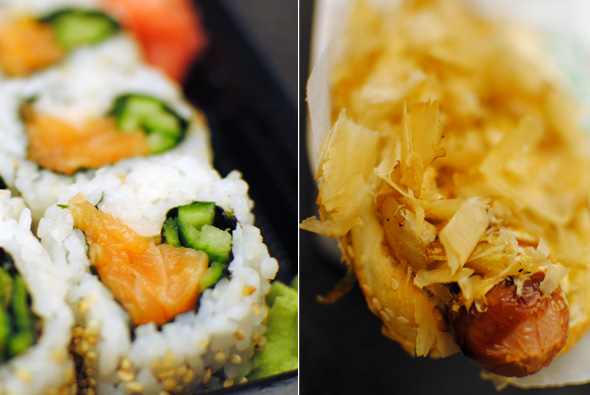 A somewhat disappointing 13 minutes later, I get my styrofoam box of proletariat fusion cuisine.The prolonged wait is quizzical in a food court that caters exclusively to time squeezed white collar patrons.

Opening the box reveals an explosion of bonito shavings burying a six inch Nathans hot dog nestled on a standard white bread bun. The fish flakes seem to have a life of their own, twisting and undulating as the delicate shavings are exposed to different temperatures.

The first bite is typical of a Nathans hot dog, with the elasticy skin giving way to an extremely salty and savoury dog. In a further ode to New York tradition, the juicy meat tube is boiled instead of grilled.

Each bite reveals why the juxtaposition of novel Japanese ingredients with a classic street meat experience has proven so successful in Vancouver.

The sweetness of the mayonnaise, teriyaki sauce and grilled onions balance the dog's natural salty, meaty flavours. The bonito shavings add not just their subtle, smokey depth, but also an exotic, paper like texture to every mouthful. 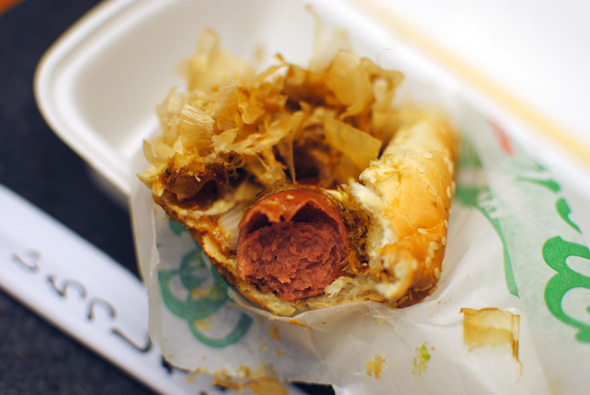 Like most knockoffs, this dog falls short in comparison to the original that inspired it. But that's not to say it's a bad hot dog. There are more notes to this snack than one you might normally get outside Nathan Philipps Square; more complex textures and flavours at work in your mouth.

Toronto Japadog fans have waited years for Japanese style hot dogs to turn up in their fair city. As long as they can wait another 13 minutes, I think their cravings will finally be sated.