Tomyum serves Euro-centric dishes like Spanish garlic shrimp alongside Southeast Asian eats of tom yum and Thai curries. Wine and cocktails are there to pair with the small plates.

Despite its large size and floor-to-ceiling windows revealing beautiful mural artwork inside, the restaurant and wine bar on Grenville is almost hidden on the quieter side street tucked between Bay and Yonge. 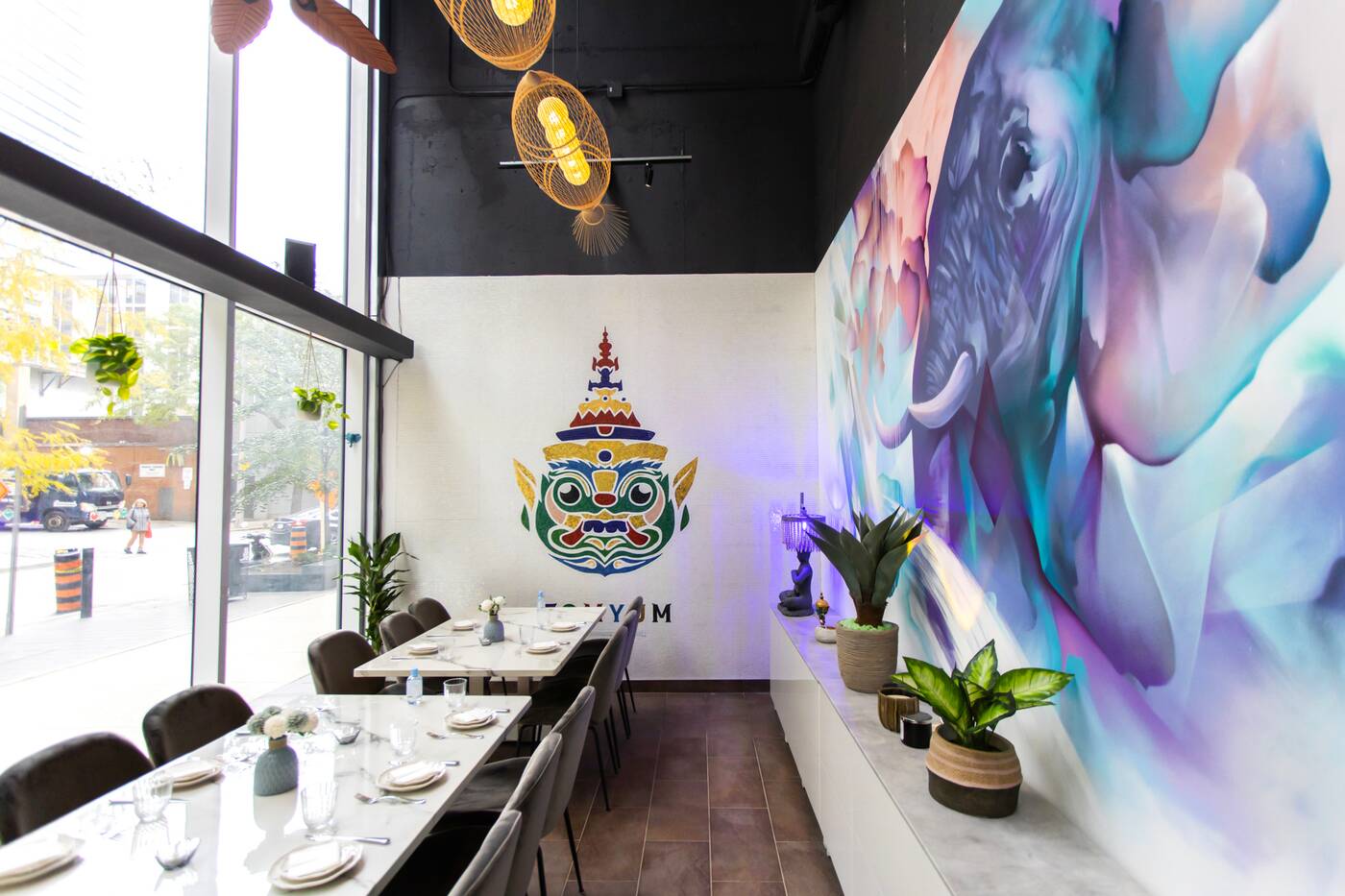 The interiors of this spot that used to exclusively serve Thai-style hot pot are pretty grandiose with a number of freehand murals done by artist Alex Bacon making a splash against white walls.

A lotus flower, female Buddha Kwan Yin and an elephant are painted in hues of purple, pink and blue. Large, decorated pillars run to the ceiling opening up the dining room even more. 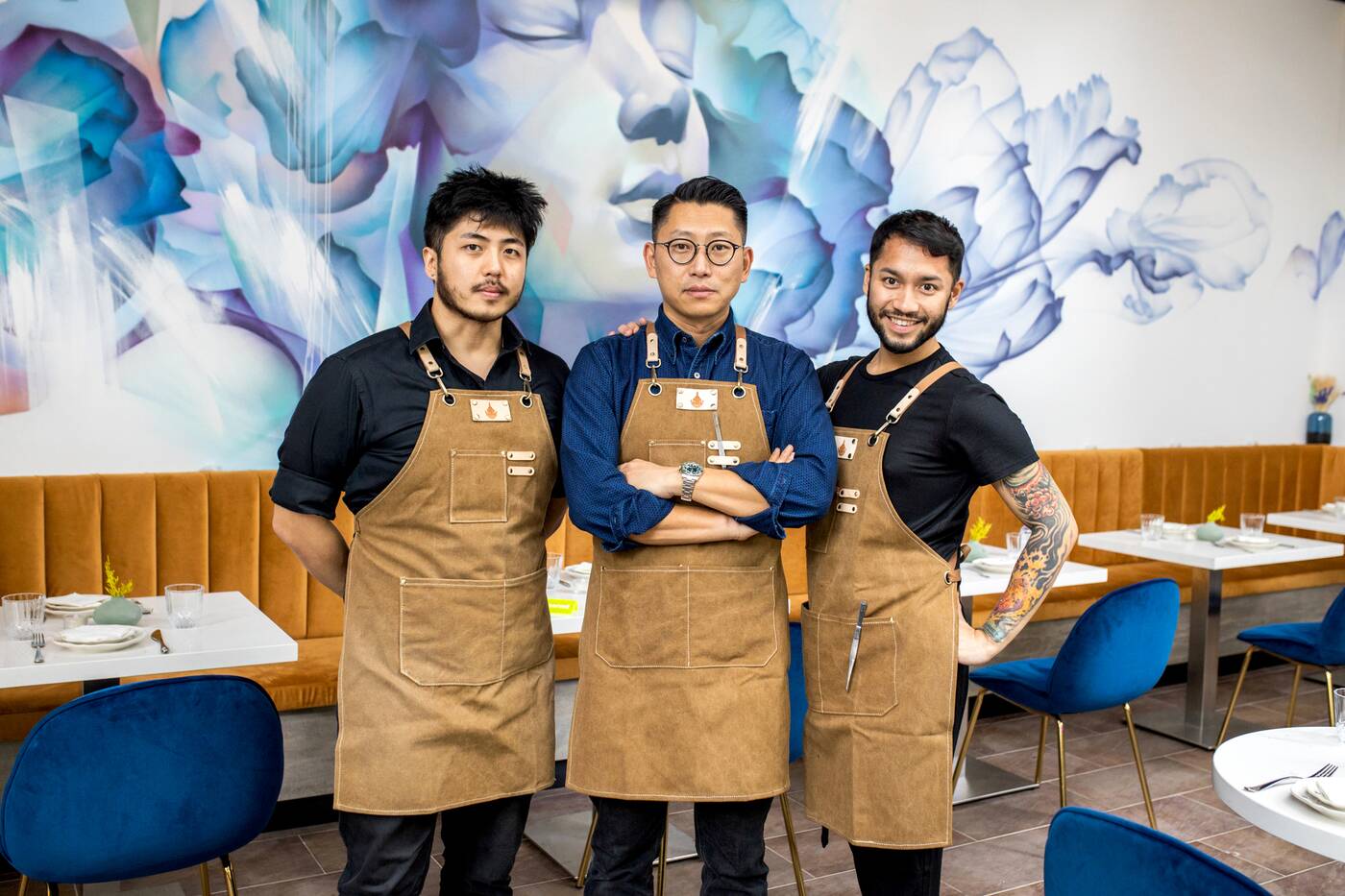 Former accountant and owner Andy Page decided to switch over to the fusion tapas and wine bar in the summer, getting his inspiration from the 15 years he lived in Europe and his travels across Southeast Asia. 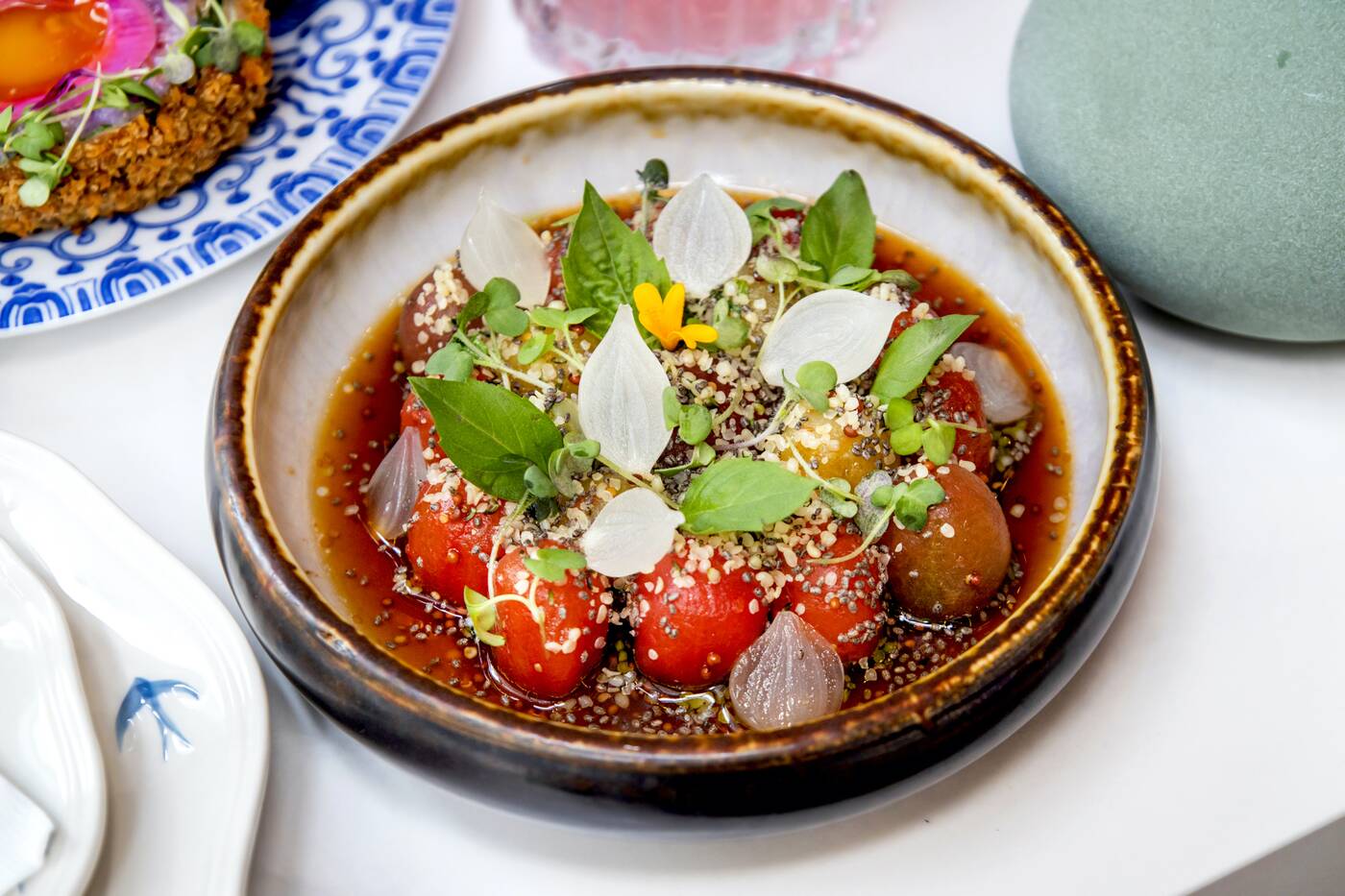 It's recommended to start off with one of the cold dishes like the grape tomatoes ($12) dressed in a housemade vinaigrette, yuzu juice and sprinkled with hemp and chia seeds. 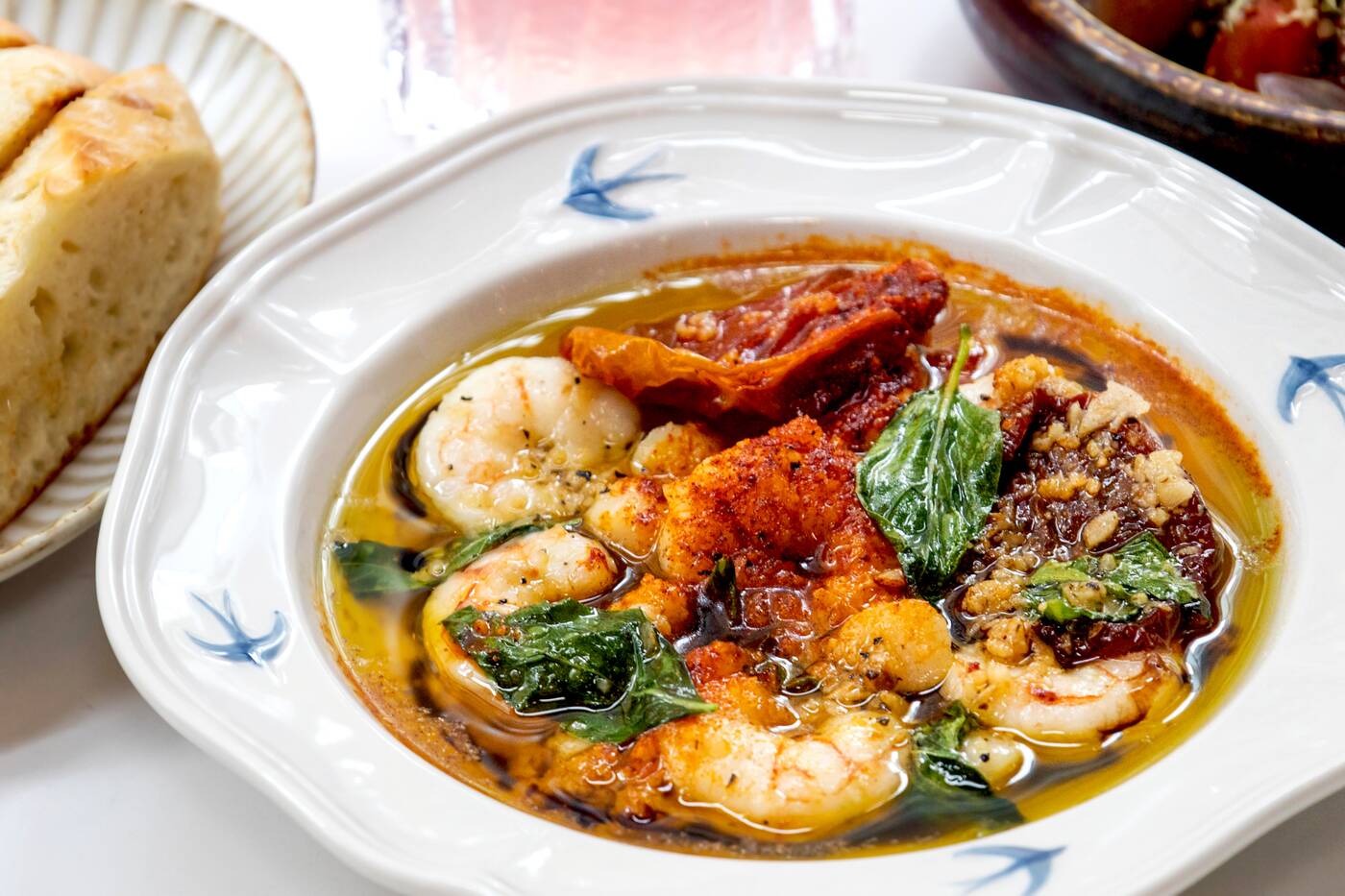 Follow that with three or four hot dishes served tapas-style. A dish with the name Deja Vu ($24) comes with prawns and baby scallops in olive oil with tomatoes, white wine, paprika and Thai basil.

The Spanish-style garlic shrimp with a slight Asian twist is a nod to Barcelona, which is where Page first got his start cooking at a friend's restaurant while living abroad. 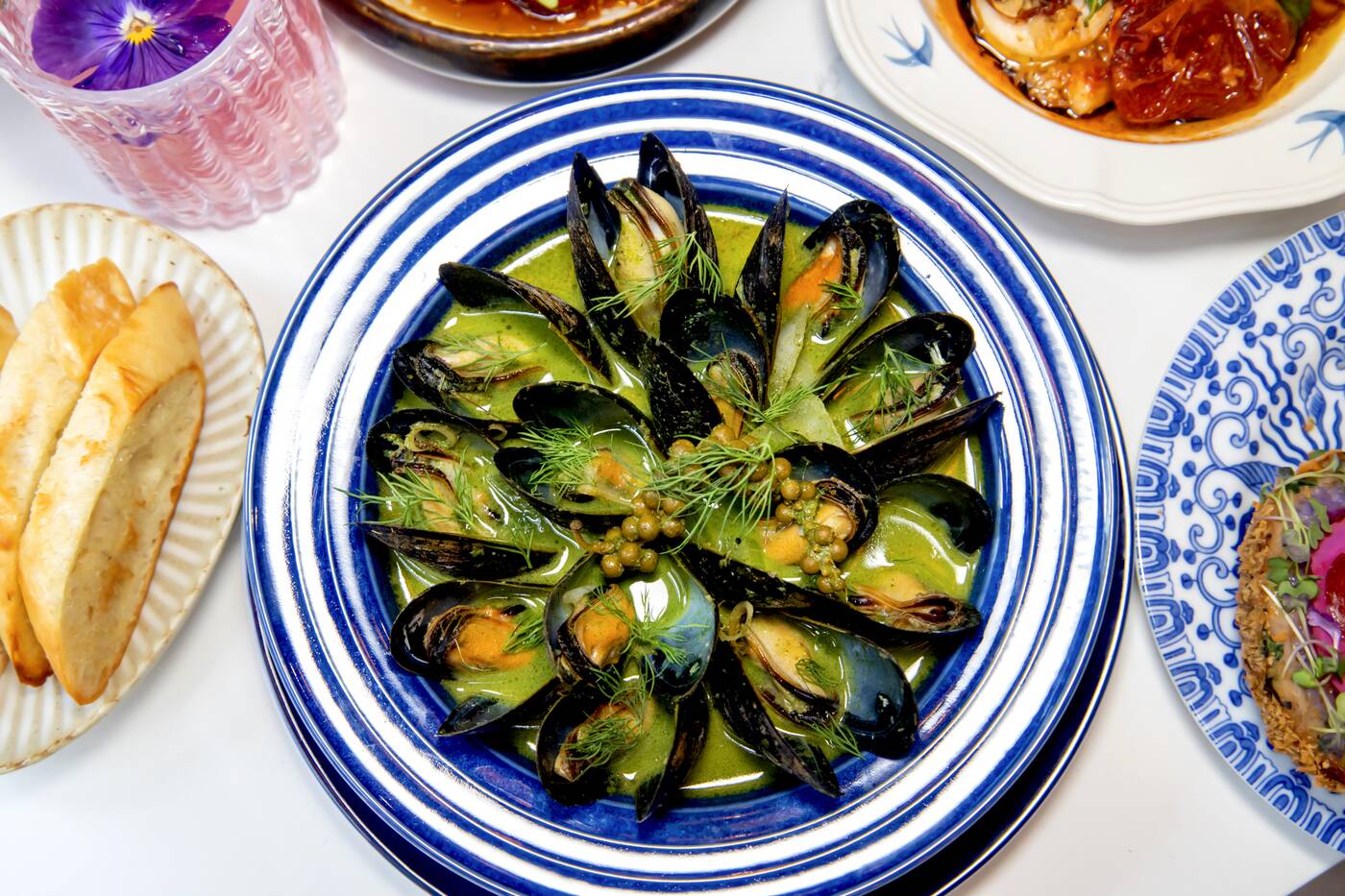 B.C. mussels in a spicy and full-of-flavour green curry ($24) is another that's served with bread on the side. 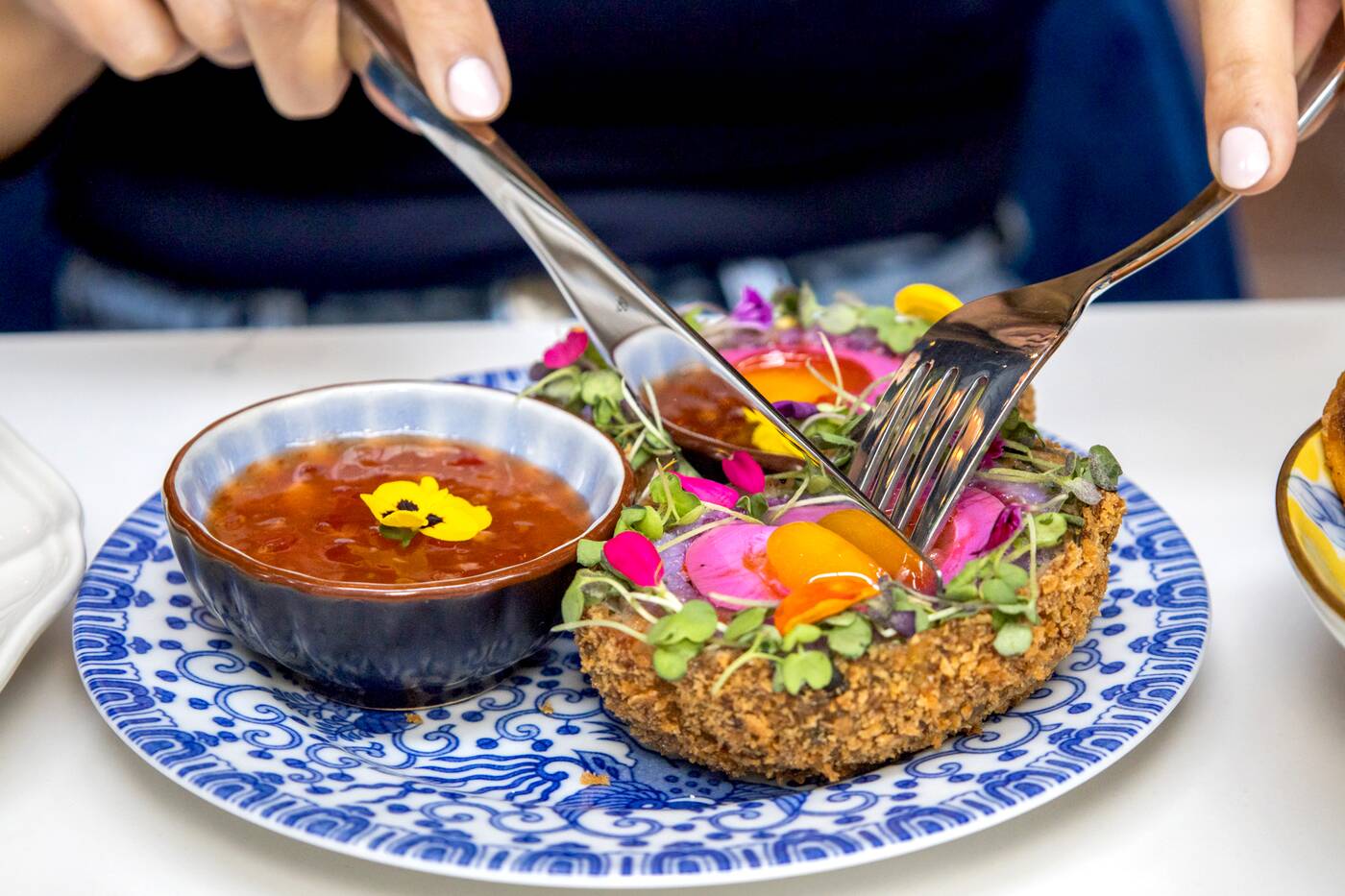 The dish called Little Bird's Nest ($16) is a different take on the popular Thai street food, Pad krapow Moo. All of the main features are there: ground pork, egg and rice – except, in this case, the eggs are marinated in beets and surrounded by sticky rice made with purple cabbage. 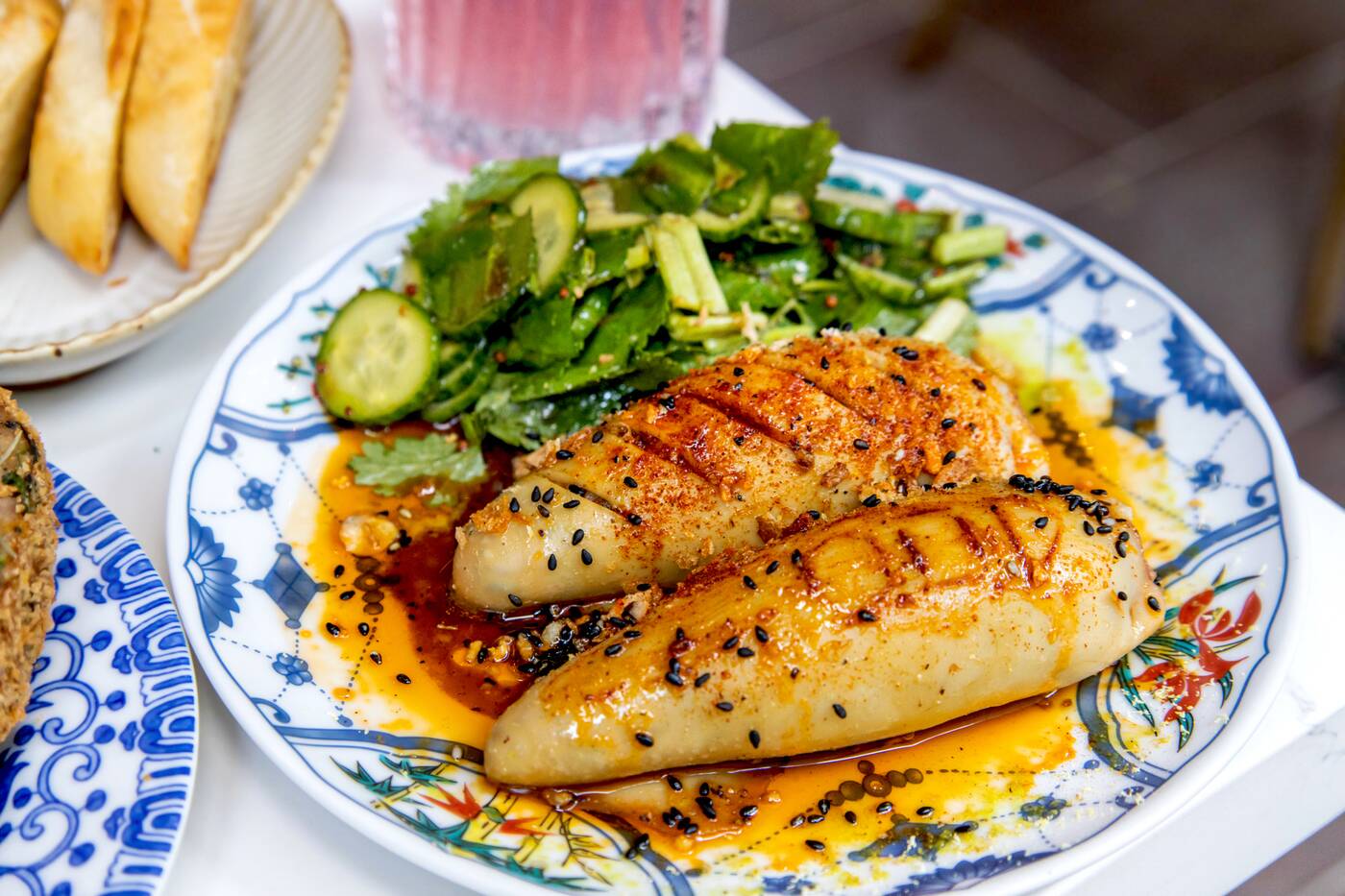 Adding to the seafood offerings is Squid Game ($18). The flesh of the fried squid is not overly tough and is stuffed with baby scallops, rice and egg. The side cucumber and cilantro salad has goji berries, which are both sweet and sour and native to Asia. 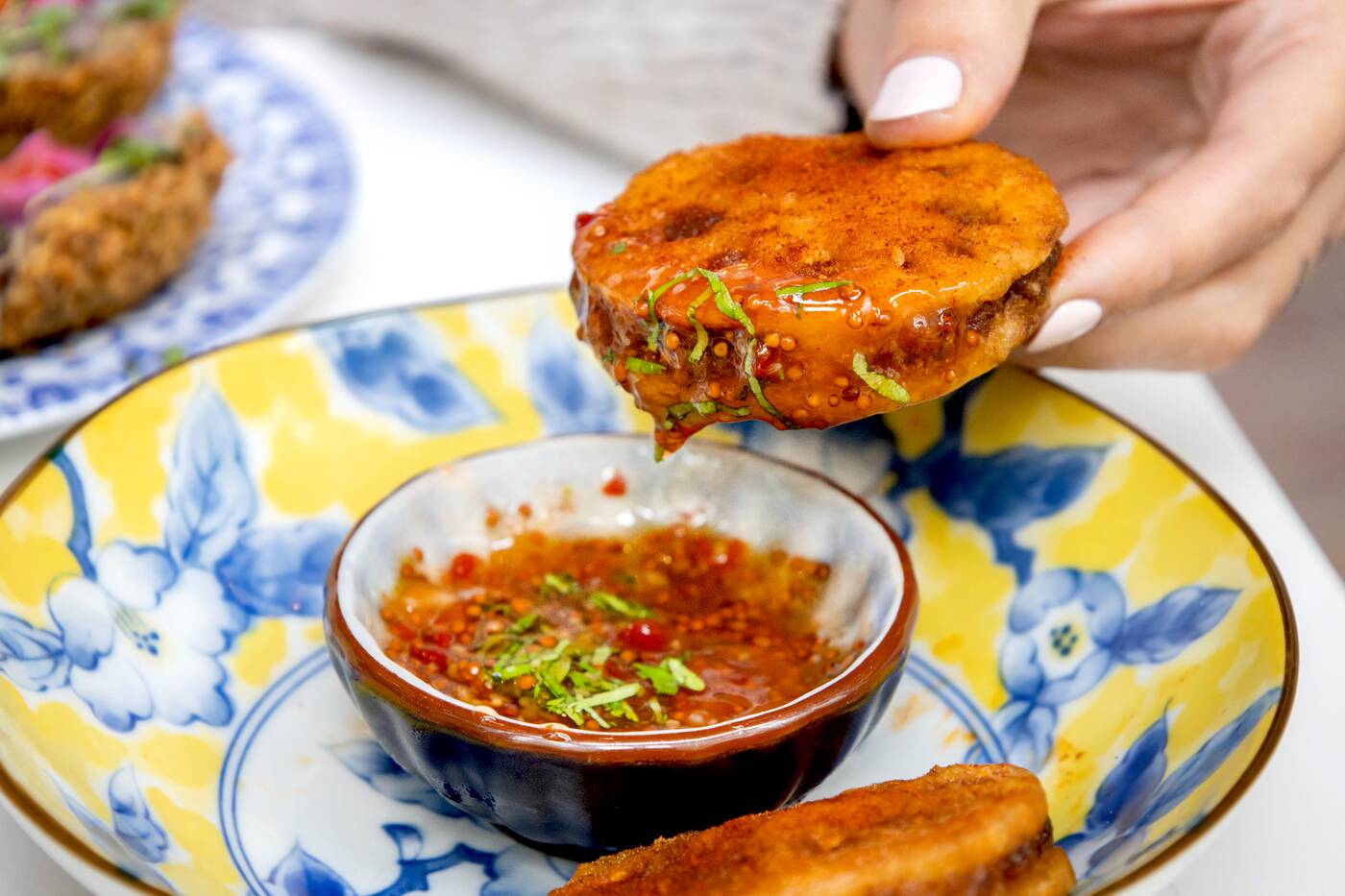 Lotus root from Asia ($18) is lightly deep-fried and paired with Ontario-grown minced beef for the next dish we try. Still retaining a tender bite after cooking, the crunchy root goes well with the housemade chili sauce on the side. 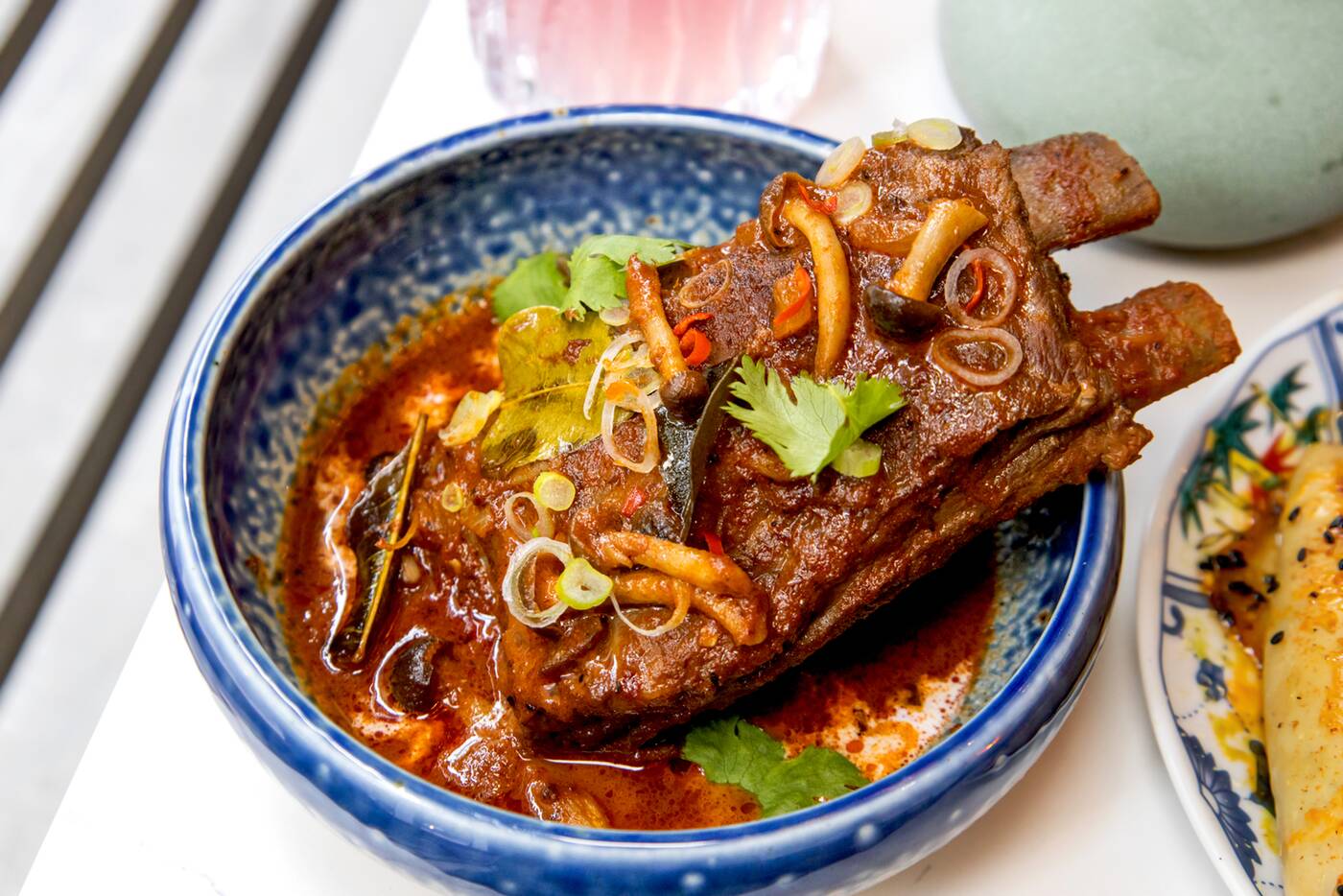 A newer dish to hit the menu is the pork rib ($25). The meat marinates overnight in soy sauce and Asian herbs before being blended with a red curry that's filled with veggies. 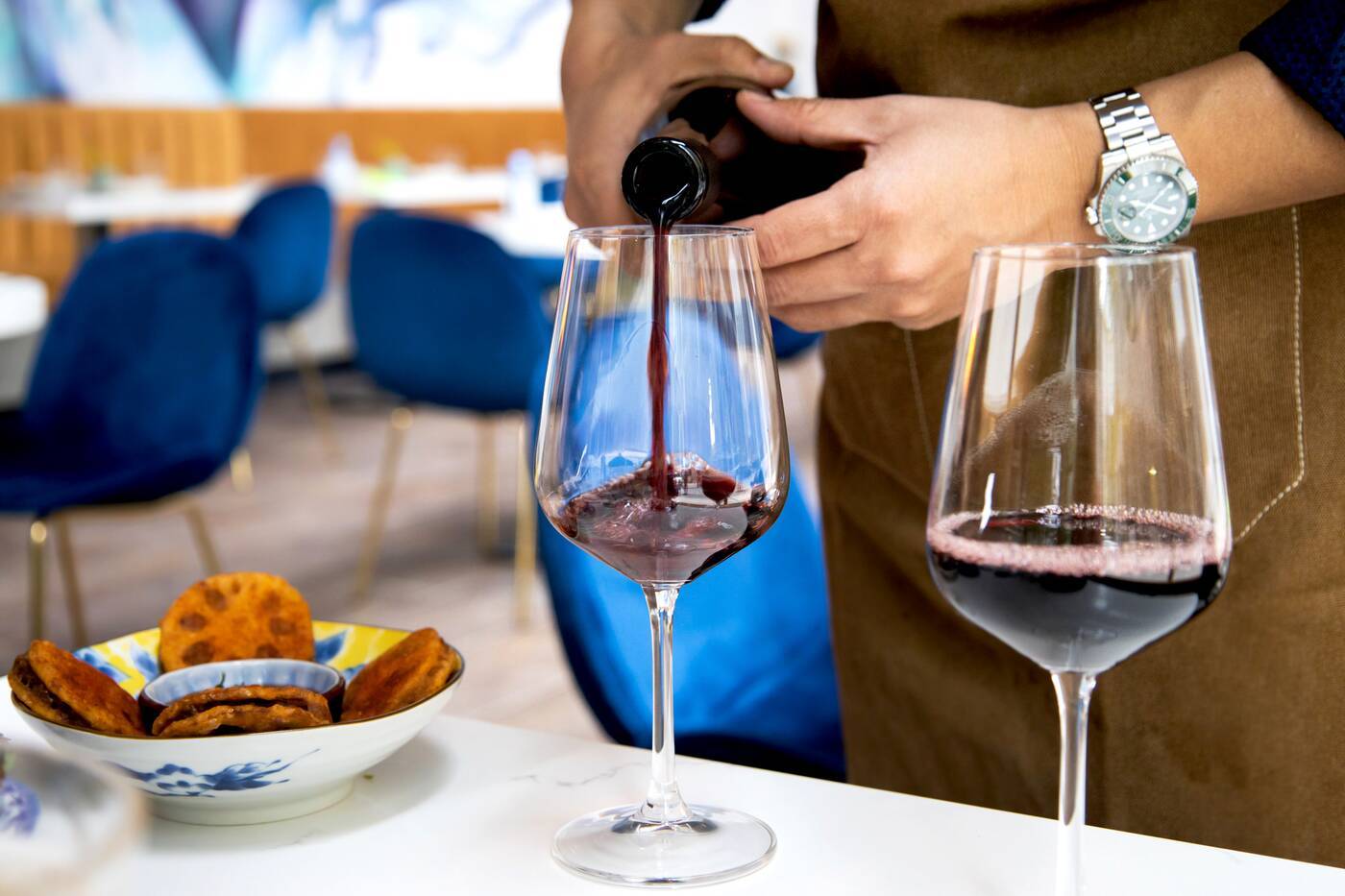 The wine list consists of mostly medium-bodied organics from Spain, Italy, France and Germany. Black Mont Rubi is a Spanish red that pairs great with seafood. Only five cases of this stuff are available in Canada, and four are here at Tomyum. 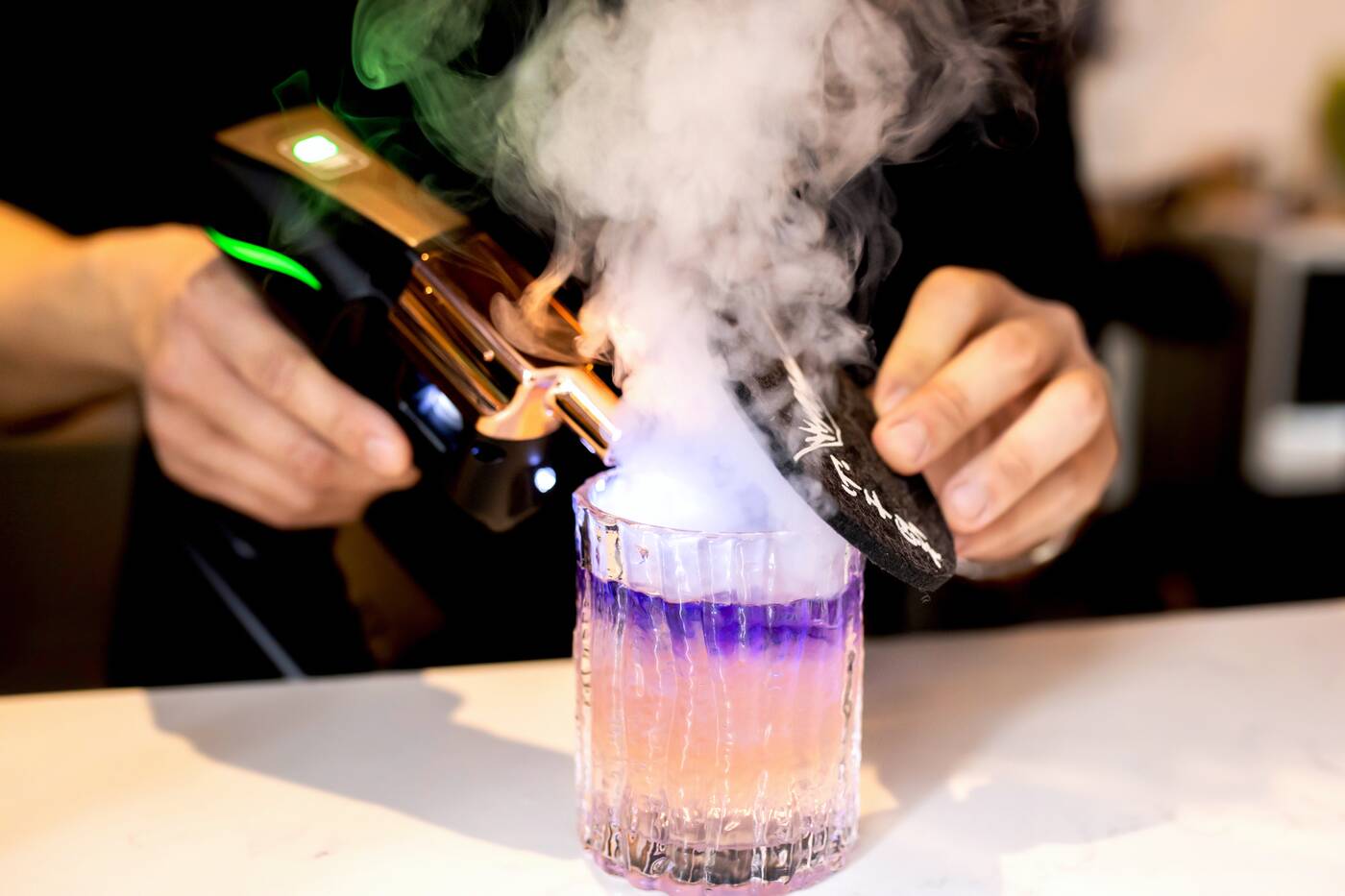 Kim also works with about six different homemade syrups and what's called a Flavour Blaster to create delicious, smoking cocktails. Love Every Soul ($18) is both the name of one of the drinks and the motto of the restaurant, painted across a wall in the dining room. 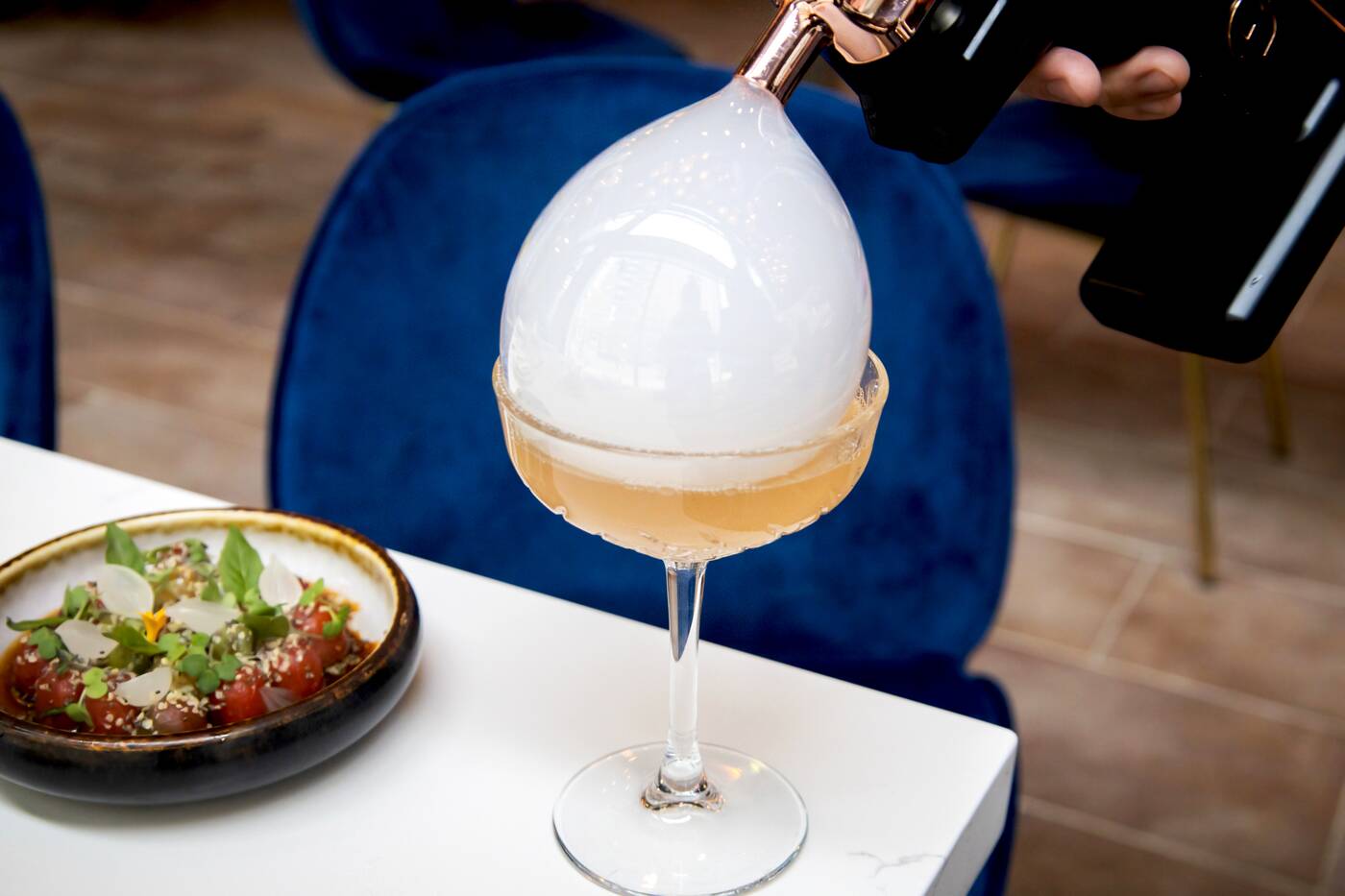 Fleeting Sunset ($18) has vodka, Malibu Rum, grapefruit and pineapple juice, but more impressive than the taste is the presentation. 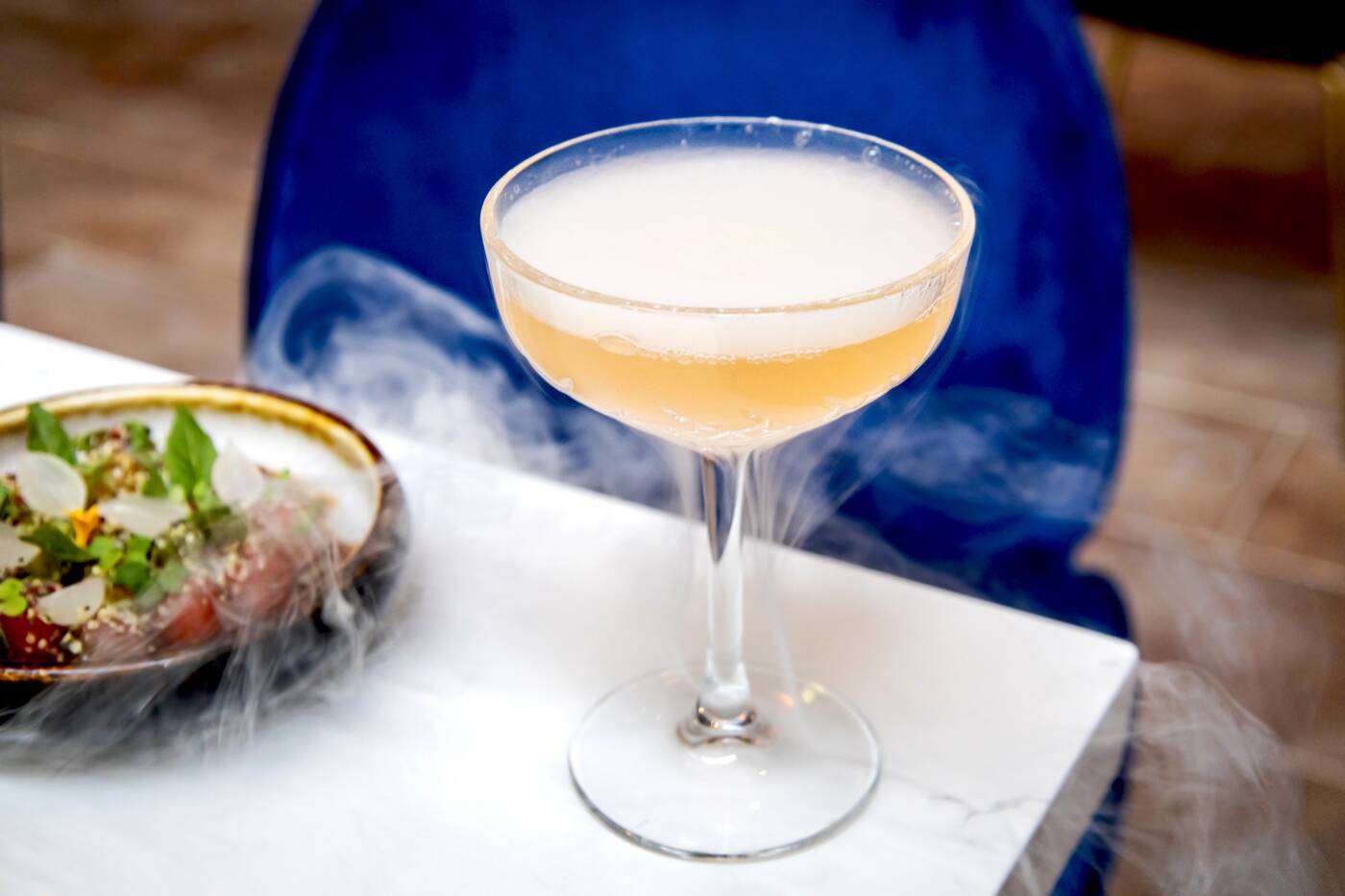 After Kim whips up the cocktail, he brings it over to the table with the Flavour Blaster to form an aroma-filled bubble on top of the drink. It's only a matter of seconds before the delicate bubble pops into a swirl of smoke. 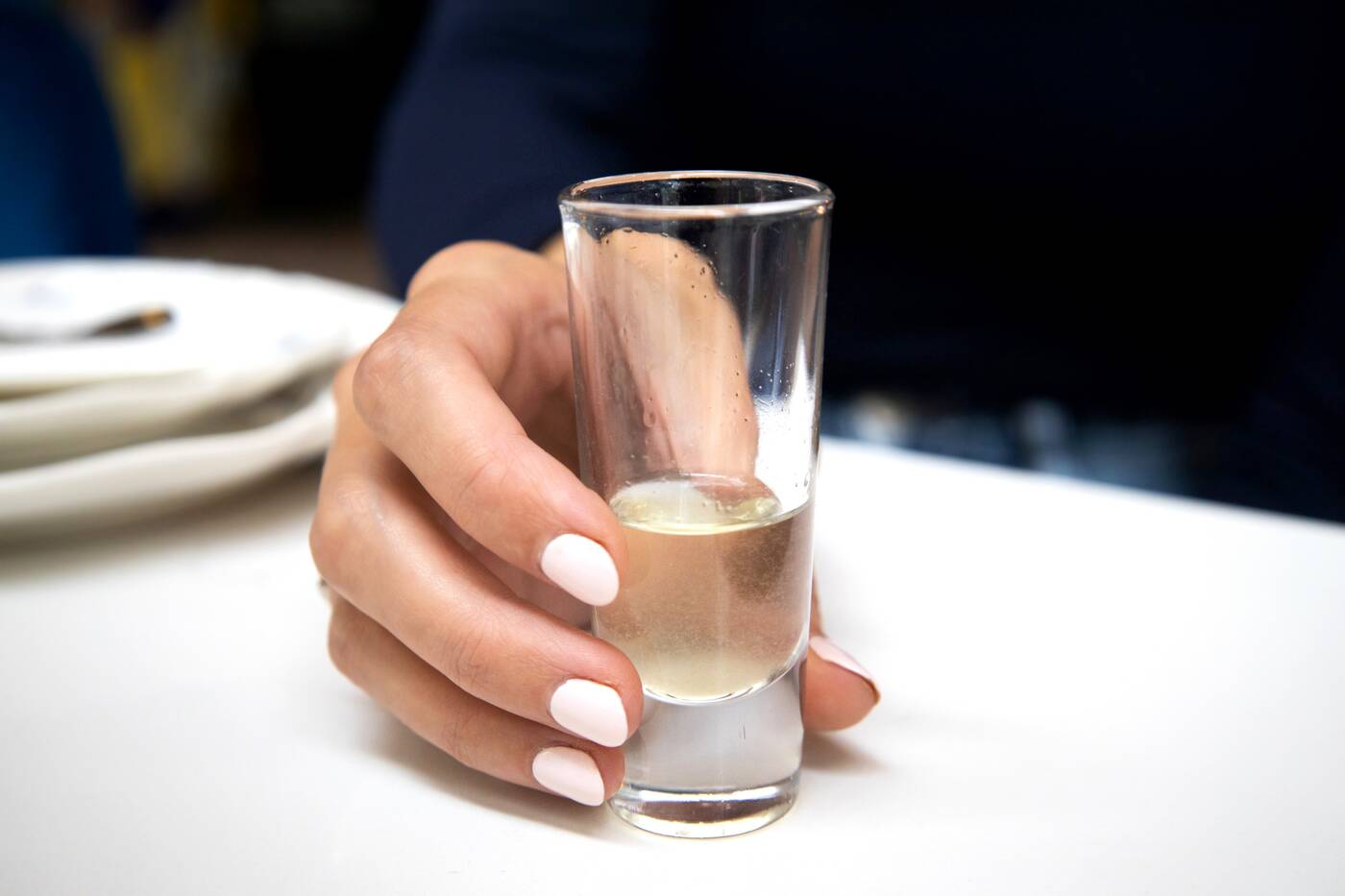 Another drink specialty is the yuzu-infused shots of tequila ($22). Kim learned how to incorporate the hard-to-acquire East Asian ingredient into cocktails while the lead bar chef at Jabistro and infuses the alcohol for a week before serving. 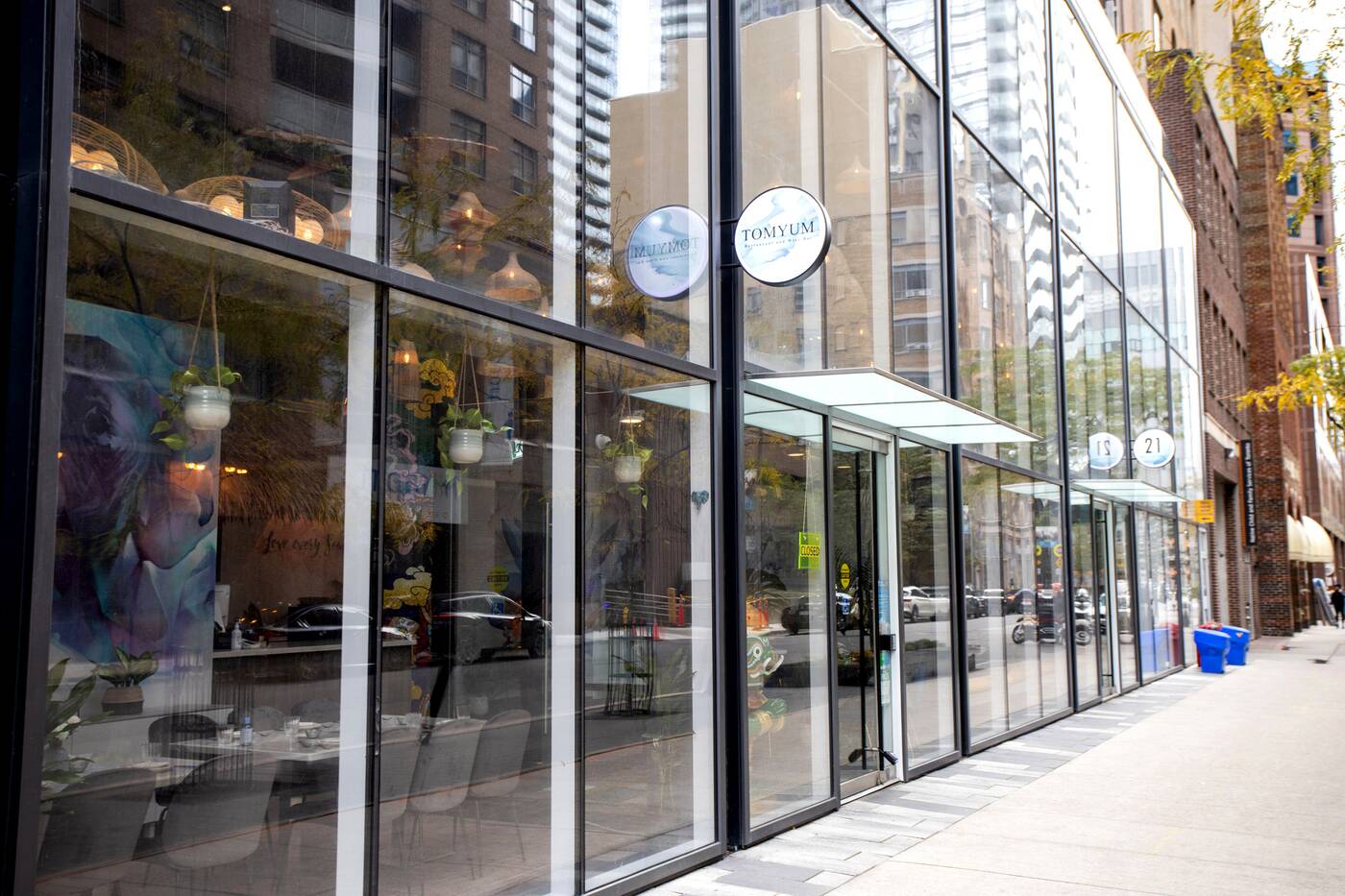