Fancy ground beef grillers like the Burger Shoppe and Craft Burger seem to've popped up faster than organized social behaviour in a colony of Bonobos. Earlier this year when I found myself noshing on an amusing if unremarkable wagyu burger with grilled porcini at Bymark , I figured the upscale burger upward evolutionary trajectory had reached an exhausted apex and despite the attendant hype, I found myself a little underwhelmed by pricey burgers unable to improve on the old stand-bys.

Admittedly, until I came across a post describing one in a food blog awhile back I had no idea that the Aussies even had a burger. What I discovered is that it may just be the best, strangest, most sublime thing since Aussies crossed a duck, a wolverine and a scorpion and called it a 'Platypus'. And Look no further than the recently opened scene-stealing Cabbagetown starlet, The Gourmet Burger Company for one of finest specimens of this chimeric concoction on this or any other continent.

The tiny, tight Parliament Street shop is cozy to the point of claustrophobic, with a few scant high, dark wood stools lining the rough-hewn wooden window counter. The space can accommodate 4 comfortably or 5 intimately - which in the summer is fine since there are more than a few places around to tuck into your burger al fresco , but on a cold, snowy, pre-winter afternoon, be prepared for dirty looks if you linger a little too long over your meal. Luckily, the friendly, efficient staff are exceedingly good at turning around orders which means you never get that cramped, clown-car feeling even during peak periods, although I suspect that might change once the word gets out on how terrific the food here is.

GBC brain-trust and proprietor John Ward, an Aussie ex-pat who honed his culinary chops in the Sydney food scene chose to throw his wide-awake hat into the burger ring with a singular idea: make the best burger possible. Ward says of the Toronto burger Scene: "I've always had a passion for the perfect hamburger, and you just can't buy one in this city. Toronto doesn't know what it's missing and I wanted to change that, plus i got tired of taking a 24hour flight everytime I had a craving for a good burger."

Bold words but the proof is in the tasting and the GBC patty doesn't disappoint. 100% Canadian Honeymans hormone-free 30-day aged beef that's never seen the inside of a freezer is ground in house, seasoned with pepper and "one other spice" that Ward wouldn't divulge. The burger is salted immediately prior to being applied to the grill and results in juicy, flame-kissed patty with a rich, meaty flavour that stands up with gusto to the myriad of gourmet house made topping and condiments on offer (most of which are offered gratis ). As good as all the toppings are though, it's the beef that's the star of the show. 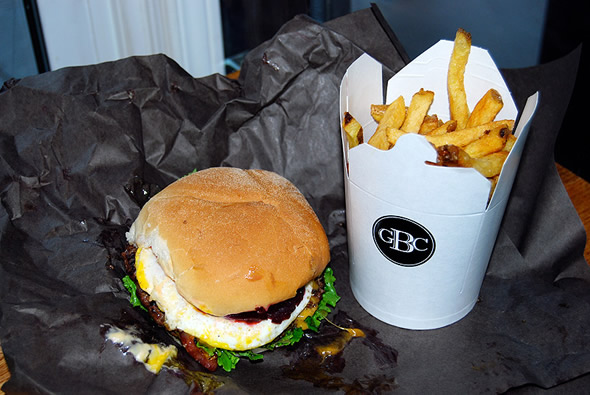 The "Aussie Burger" ($8.50) takes the outstandingly juicy patty and slides it between the halves of a soft crusted egg bun, and tops it with melted marbledcheddar, crisp iceberg leaves, tomatoes (which appear on all the signature burgers), and creamy house mayonnaise. Things are elevated to giddy stratospheres with the addition of bacon, pineapple, braised beets (also produced in-house) and gloriously tops things of with what would otherwise be breakfast in the shape of deliciously salty marbled strips of crisp smoky bacon and a golden-yolked fried egg. The yolk is perfectly runny without being messily so, creating a hollandaise effect which enhances every other topping. I've loved fried eggs on my burgers since my dalliance with the double 'd' and it's something that more burger joints should offer.

Far from being cloyingly sweet the pineapple creates a nice agre-dolce vibe and adds a deliciously novel earthiness to the burger. Though exceedingly substantial this burger will disappear faster than a Tory minority government. And while admittedly, this isn't the cheapest burger you'll ever eat, the price is definitely justified by the sheer volume and high quality of the cast. 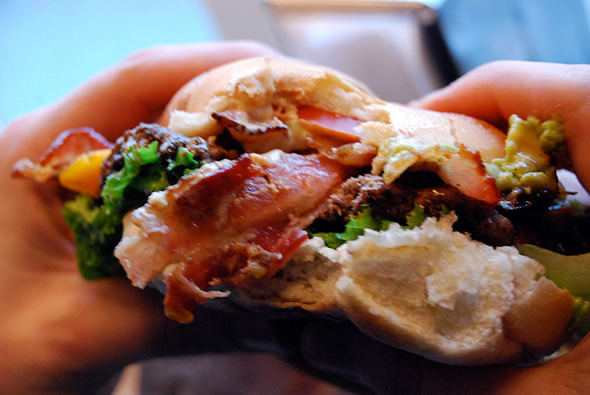 The "Works" burger ($6.95) is yet another essay in seriously wonderful excess. It's topped with sauteed mushrooms, caramelized onions, bacon, cheddar and mayo. Our burger tester decides to add some complimentary avocado just because you can never have enough of a good thing and is more than pleased to opine that it's like a different burger with every bite! 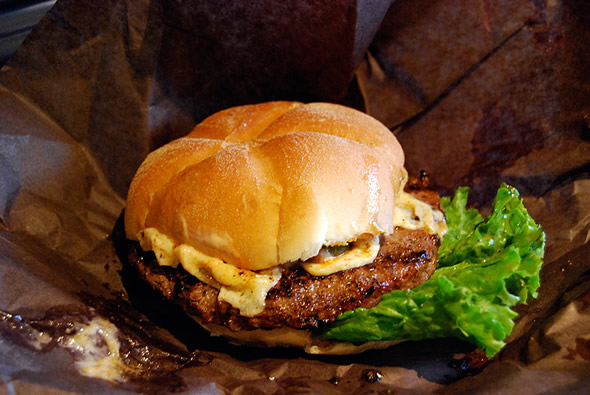 Enjoy a little burn with your burger? The Spicy Cajun Burger ($5.95) seasoned with a hearty bayou spice blend and dressed with avocado, jalapeno (which come both in the pickled variety and flecked through the havarti melted on top) along with a smoky sweet chipotle & honey mayo.

Even the token veggie brought along says the patty in his burger is probably the best he's ever had and has a hard time believing it's not meat. The only complaint about any of the sandwiches enjoyed on this visit was the fact that the mushrooms and caramelized onions would have been nicer warm than the cold ones that adorn our burgers.

With burgers this good (and substantial enough to make a decent meal solo) it would be easy to ignore the sides but the perfectly salted and greaseless fries which come in chunky skin on potato and shoe-string sweet potato configuration are a welcome addition to any burger ($2.95 a la carte, any burger can also be combo-ed with a side and pop for an extra $3.95). The chubby onion rings ($2.95) are crispy, sweet, and arrive piping hot as well. Next time, I'll be sure to indulge in one of their extra-thick two-scoop milkshakes ($3.25, in either chocolate, vanilla, or strawberry varieties).

Ward makes no secret of how franchise-ready this joint is, beaming when he mentions he's already had several inquiries. And as long as he can keep the quality this high (and maybe add some space for people to eat-in) this GBC could be the next step in burger evolution and will make you very happy you have opposable thumbs to wrap around one of their top-shelf sandwiches. 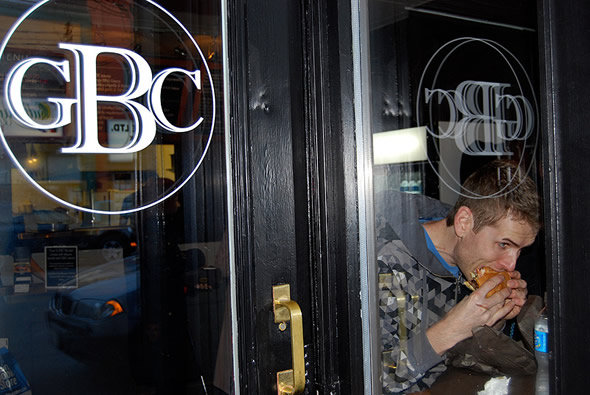 I picked John's brain about the state of the Toronto Burger Scene and here's what he said:

What inspired you to start GBC?

I've always had a passion for the perfect hamburger, and you just can't buy one in this city. Toronto doesn't know what it's missing and I wanted to change that, plus i got tired of taking a 24 hour flight everytime I had a craving for a good burger. I thought Torontonians would appreciate and welcome something new and exciting. I've also seen a trend over the last five years toward wholesome non-processed food and that's what we strive for at GBC.

Upscale burgers seem to be increasingly popular in the city. Were you concerned at all that you were entering a market that already had a lot of competitors?

No, because we are completely different from other Gourmet burger businesses. We age our own beef for a minimum of thirty days; we grind our own beef; we add no fillers to our burgers; we make all our own toppings, from braising our beets to our sauces and mayos; and we always grill our burgers to order never pre-grill. I've never seen any other burger shop do that. In fact, I welcome competition because I know we make the best burgers in Toronto.

The test of a good burger is tasting a patty on a bun with no other toppings. If it's juicy, moist and perfectly seasoned then you have a great burger. Most of the other burger shops aren't able to fulfill those criteria. Trust me when I say I tasted a lot of burgers while doing my research!

Is there such a thing as too many toppings on a burger?

Never! The great thing about our concept is that you can build your own burger and most of the toppings are complimentary which cuts the cost down for our customers. Everybody has completely different tastes.

We offer some unique burgers and toppings such as fresh beets and a 100% lamb burger which is generally only offered in higher end restaurants.

The Aussie burger's a standard down-under but what made you think of offering it here in Toronto? How's the reception been to it?

The aussie burger is to Australia, what poutine is to Quebec. It's a standard burger across the country and 20 million Aussies can't be wrong! The reception has been amazing, it's one of our top three best selling burgers. I think people are looking for something different and interesting and the flavors work very well together.

I also had a lot of people ask me when I was developing the concept if I would be offering an Aussie burger. I think that a lot of people have traveled to Australia and remember the burger.