Thai Noodle is currently open but their offerings and services may be affected due to the pandemic. Please contact the business directly for more information about any changes. Is this your business? Please contact us if you would like to update this message.

Thai Noodle straddles the border of Kensington Market and Chinatown at the corner of Baldwin and Spadina. Its tacky appearance puts it more into the nondescript Chinatown restaurant category, but what it lacks in aesthetics, it more than makes up for with it's food. Thai Noodle specializes in (surprise) Thai noodles, otherwise known as Guay Tiew, and touts itself as the first real Guay Tiew restaurant in Toronto and possibly all of Ontario. Since it opened in fall of 2010, Thai Noodle has been my go-to Thai restaurant.

I grabbed take-out for my roommate Allie, our friend Harry and myself on a snowy Sunday evening. Before I left, Allie carefully instructed me on the importance of ordering vegetarian spring rolls ($4/4 pieces), making sure I completely understood how vital it was to get enough. 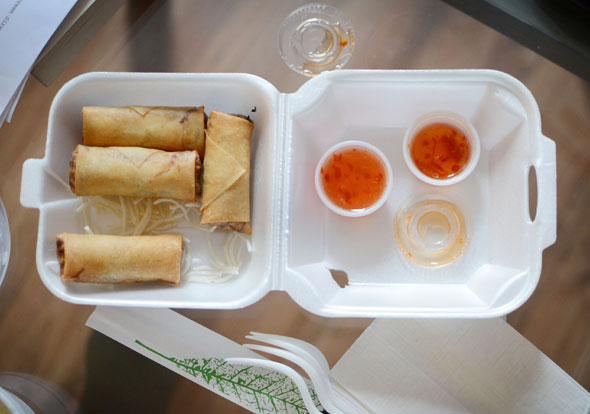 The spring rolls are fairly standard, crispy delights served with sweet chili sauce and generously stuffed with glass noodles, carrots, black mushrooms and bamboo shoots. I'm not crazy about them, but Allie is minorly obsessed and almost friend-broke-up with me when I ate the last one. The spring rolls are a delicious deep-fried indulgence, but make sure you order plenty if you want to keep your meal civilized. 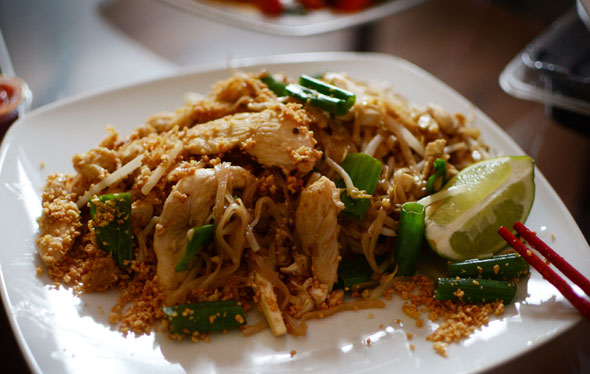 For my main, I chose the chicken Pad Thai ($7.95). The other week I had tried the vegetable Pad Thai (also $7.95 oddly) and was disappointed by it's lack of flavour and over abundance of clumpy, greasy noodles. I decided to see if the chicken was any better and it certainly was. There was notably more flavour and sauce while the soft, flat noodles stayed loosely separated rather than globing together. The noodles were generously sprinkled with roasted peanuts and had a subtle lime bite to them. 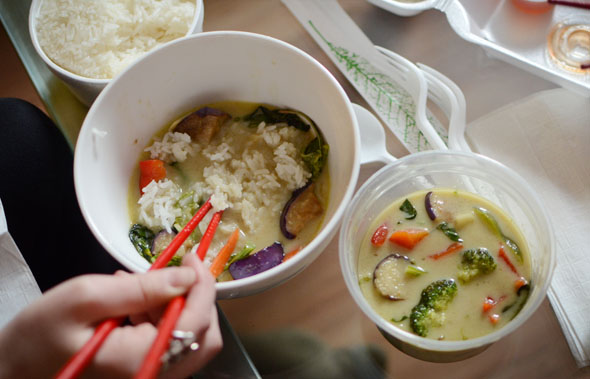 Allie ordered our favourite, the green curry. Like the red and golden versions, the green curry is prepared with thick chunks of fresh eggplant, bamboo shoots and bell peppers. The eggplant is the star of the vegetables in the curry, cooked perfectly without becoming soft or mushy. The sauce is creamy and intensely flavourful with sweet basil mixed in. The green curry is spicier then its red curry counterpart but, it's still mild enough to warrant adding hot sauce in my opinion. The green curry is my plat préféré at Thai Noodle and even the servers recommended as one of the house specialties. 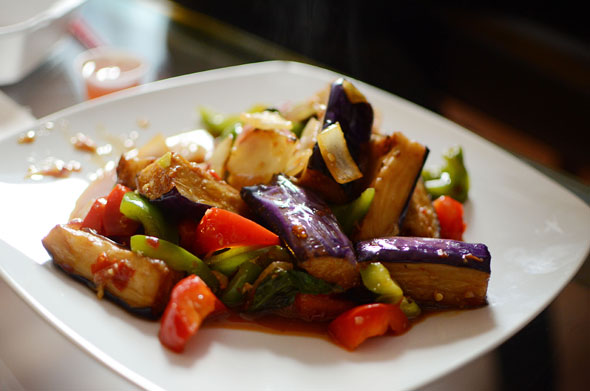 Harry decided on the spicy eggplant dish ($7.95), a heaping of their spectacularly cooked eggplant mixed with red and green peppers and cooked with a light sauce. The 'spicy' level is definitely set for North American's liking so fear not those with a delicate palate. The sauce adds a healthy dose of flavour to the dish without overpowering the thick slices of fresh vegetables.

I went back the next day for lunch to try the noodle soups and for the first time I stayed in the restaurant to eat. Our waitress was friendly and explained different menu items and their traditional preparation in Thailand - it helped that she was actually from Thailand.

While I came with the intention of trying the soup, I was persuaded by a photo on the menu to try the khao soi gai ($8.95). The photos on their menu are probably the most appetizing I've ever seen in the vicinity of Chinatown.

The khao soi gai (top photo) was a mixture of thick curry soup, specially crafted by the head chef, with cooked noodles topped with crispy fried noodles and fresh sliced onions. The soft and crunchy noodles made for a perfectly delicious mix of textures. I was sufficiently starving and nearly devoured the entire heaping bowl, but alas, the enormous portion was still too much to completely finish off. 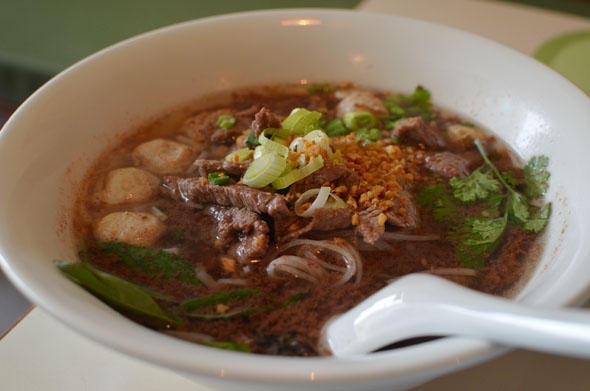 My friend had the Guay Tiew Ruer Nuer, a simple Thai soup with rice noodles, beef and bean-sprouts in a brown soup broth ($8.95). The soup broth was well seasoned and salty but, as my friend eloquently noted, "not gross salty". Our waitress explained that it's Thai style to first taste the soup and then add chili peppers, hot sauce, sweet and sour sauce or sugar to taste as she placed the four jars of condiments on the table.

Besides the soups, nearly all the dishes allow you to choose between vegetable, tofu, chicken, beef, shrimp or seafood giving vegetarians and meet-eaters multiple options. Thai Noodle offers a plentiful menu without being overly ambitious and diluting the quality. Their range of Guay Thai along with traditional Thai menu options, like curries, are bright in flavour, large in quantity and low in cost. 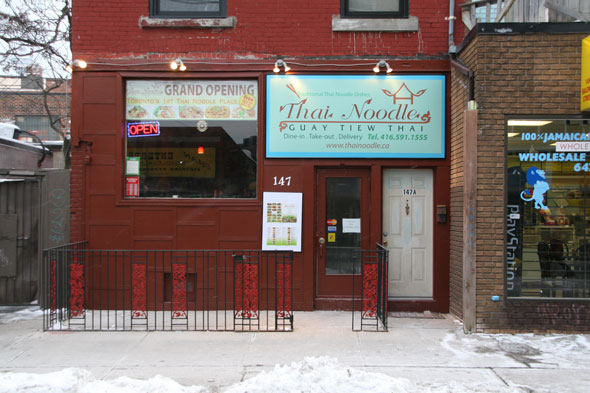 Satay on the Road