While much is sourced from Nova Scotia, P.E.I. and Fogo Island, they use lots of small seafood suppliers and also try to source as much as possible from within 100 km. Everything is delivered fresh on a frequent basis. 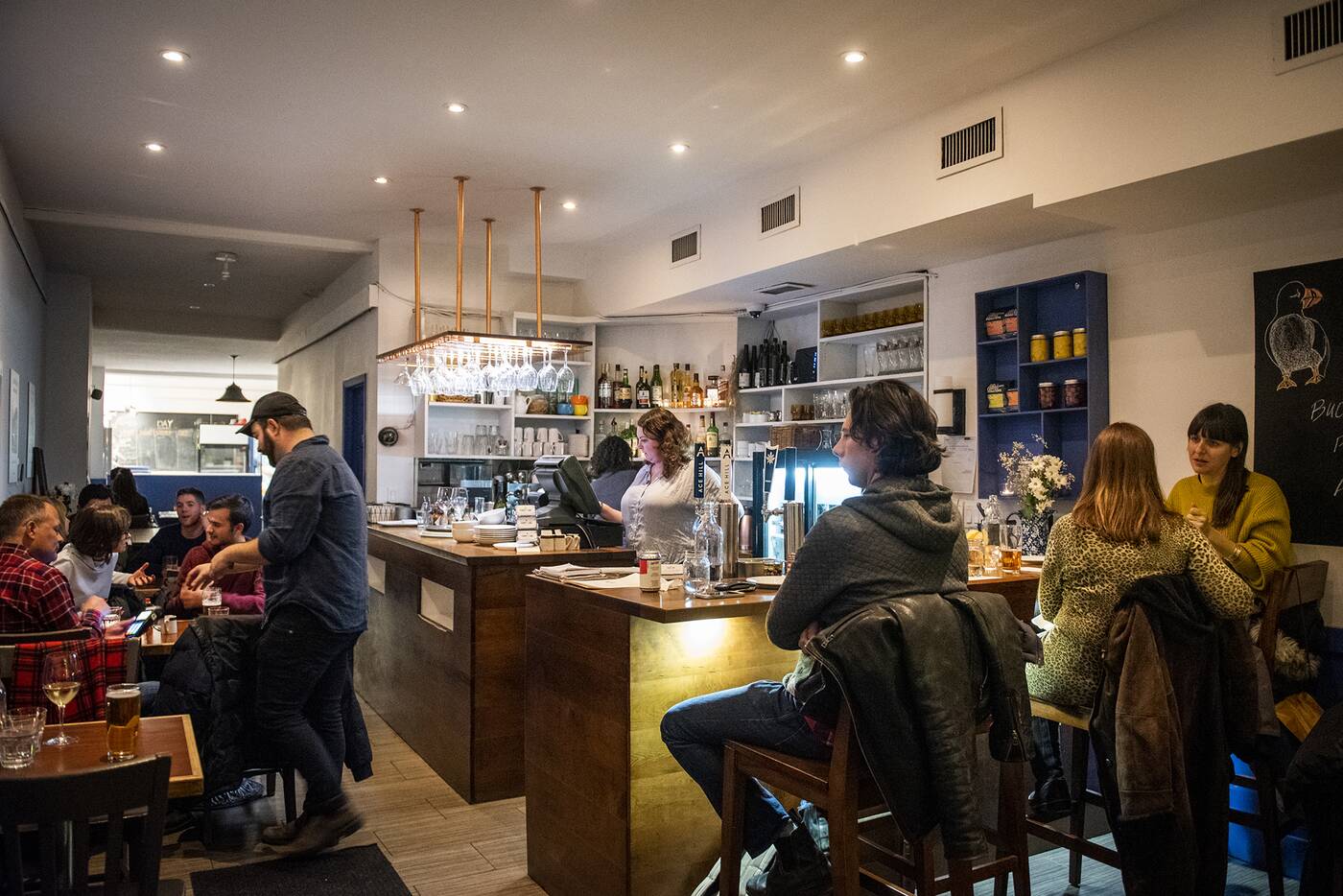 The casual but still romantic space opens on a chalkboard menu of mostly local organic wines and a bar, narrowing in the middle and opening again at the back, where there’s an open kitchen with another charming chalkboard shopping list. Posters of Maritime outports feel a bit like a tourist bureau, but add to the place’s sense of pride. 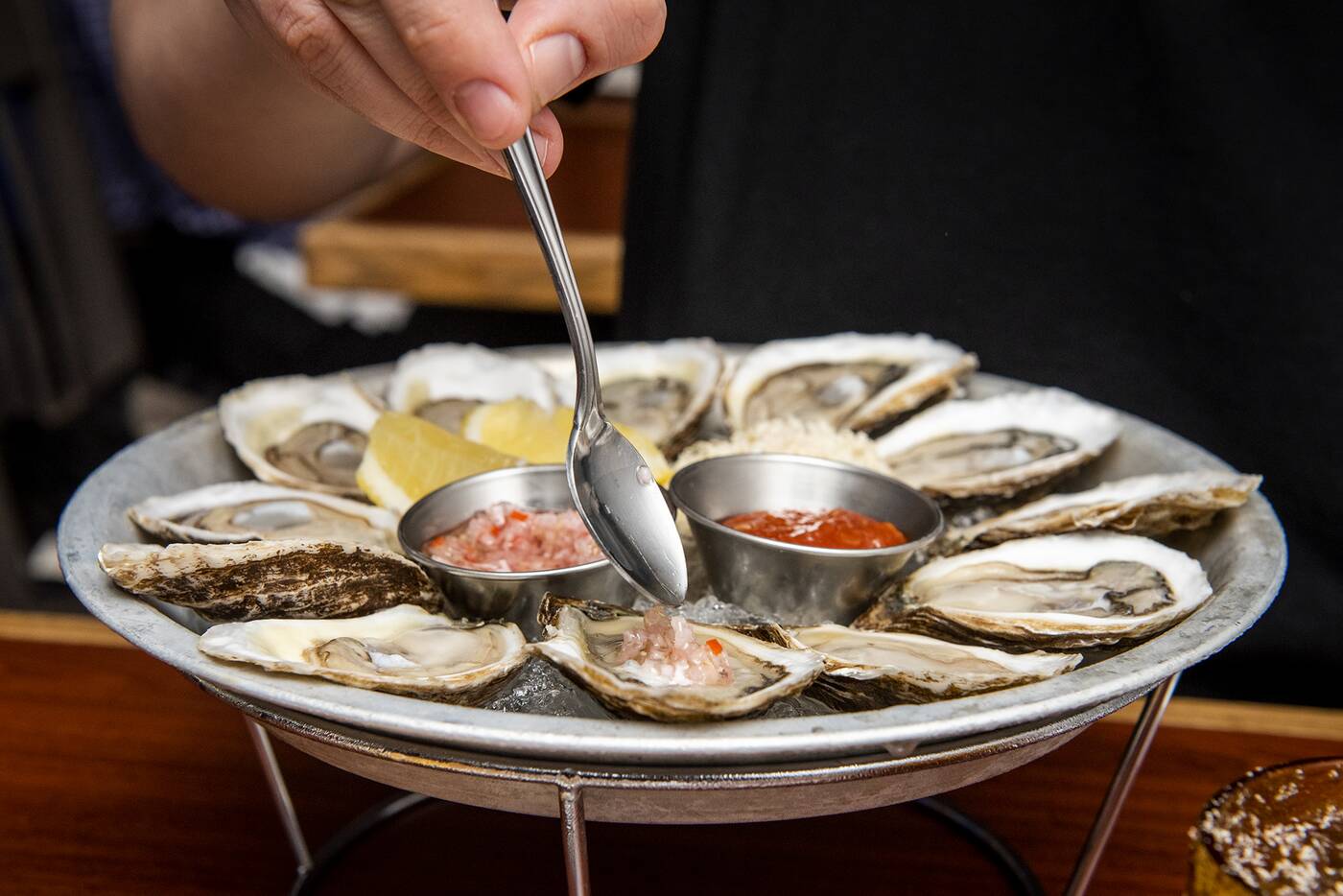 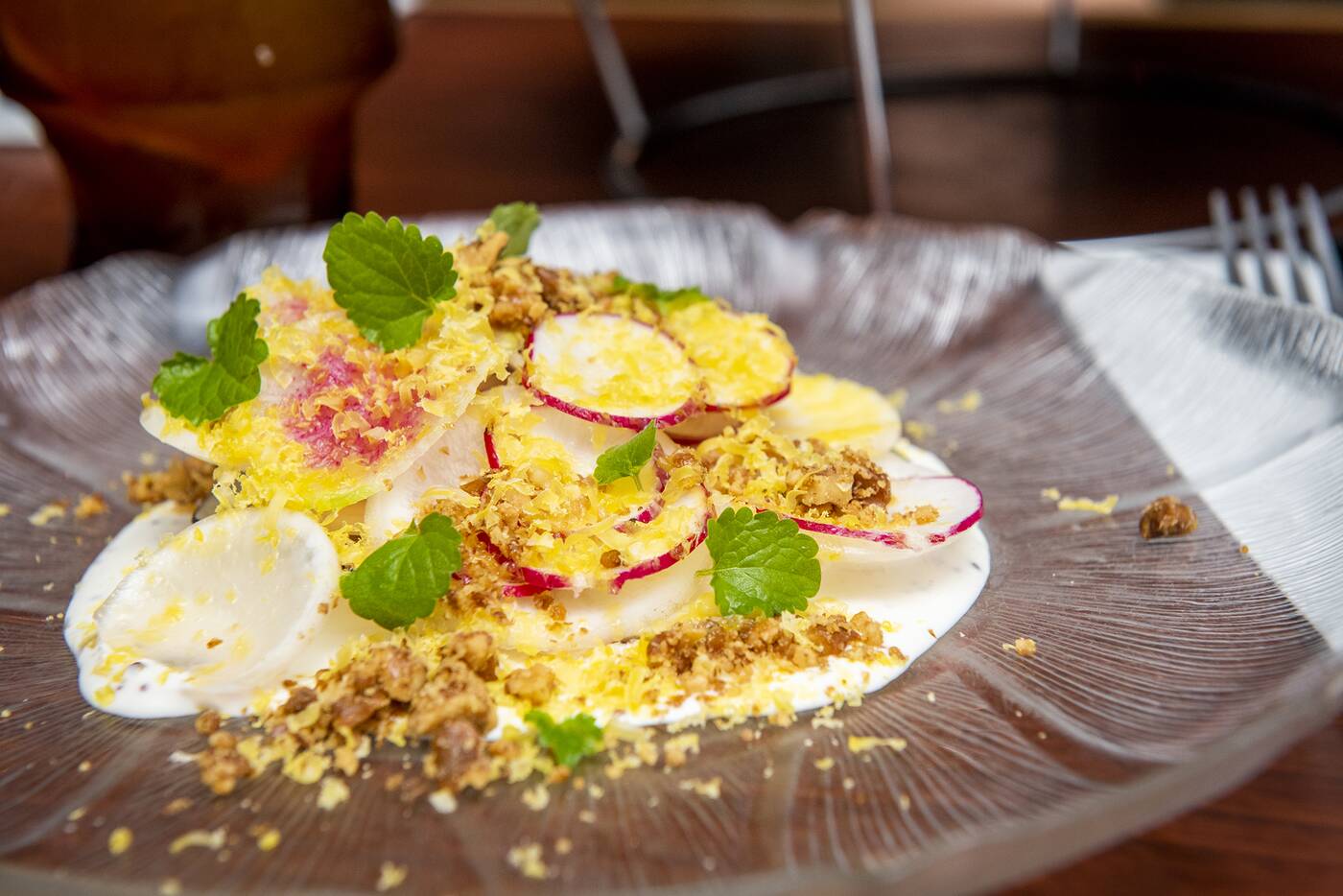 A fall vegetable salad ($12) is an ode to roots and preservation, different types of radishes and Tokyo turnip thinly sliced and plated with a buttermilk dressing and candied walnuts, meant to be tossed. The result is a balance of fresh and tangy, heat and coolness. 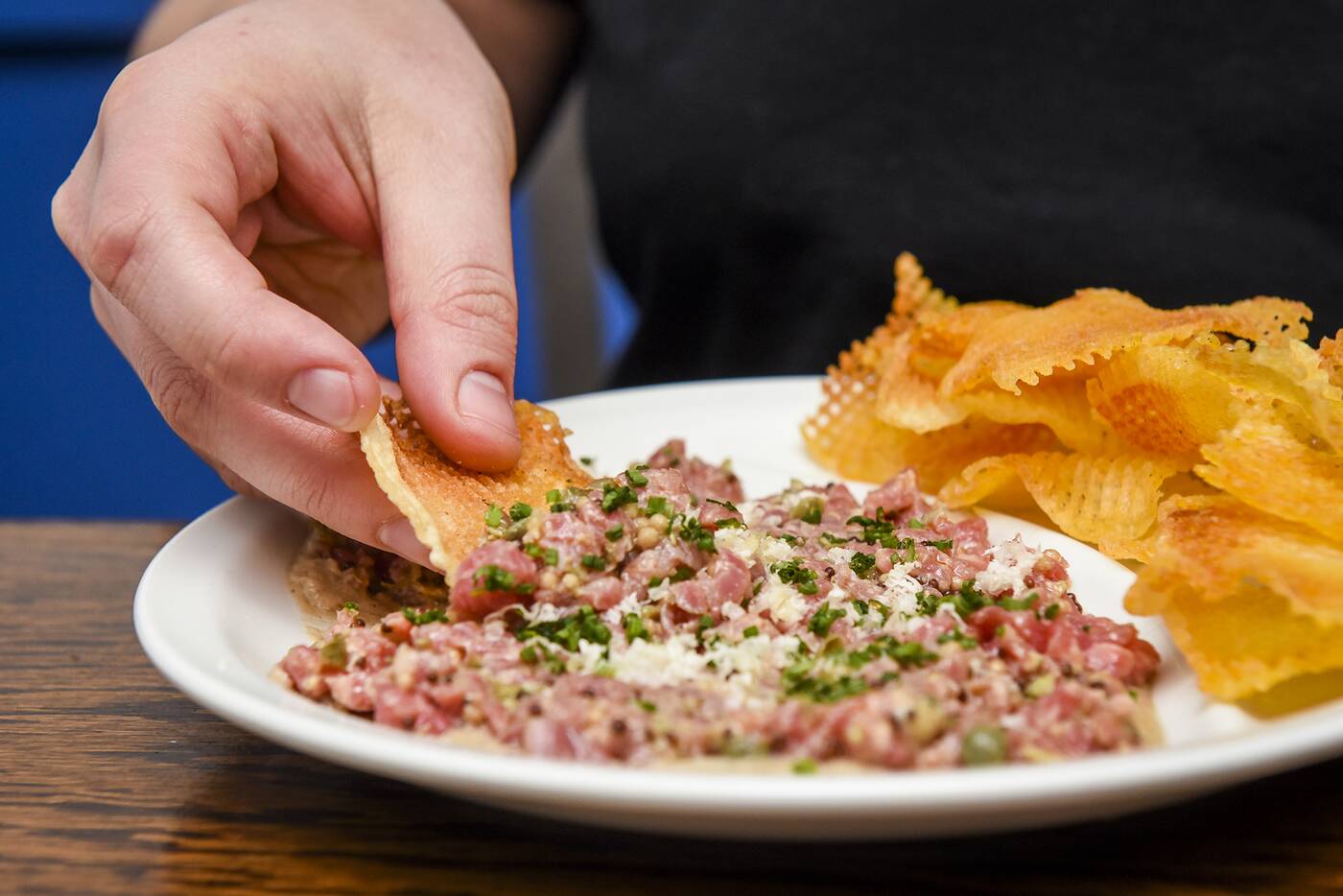 Steak tartare ($15) shows seafood doesn’t always have to take centre stage here, though there’s typically some aquatic element. In this case, it’s a base of Italian-inspired anchovy bagna cauda under the tender chopped meat. Gaufrettes on the side have a bit of a spicy BBQ flavour that adds extra kick. 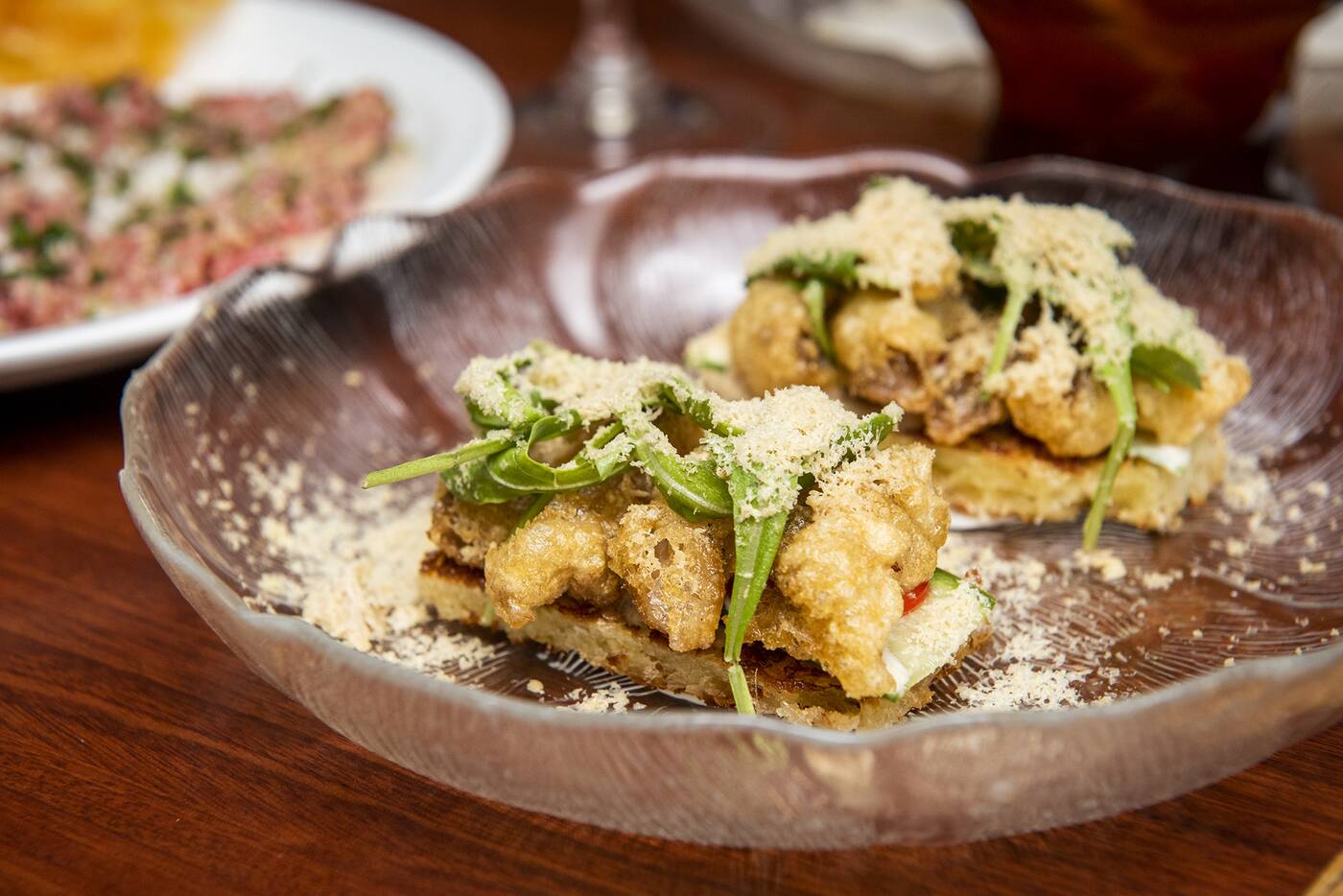 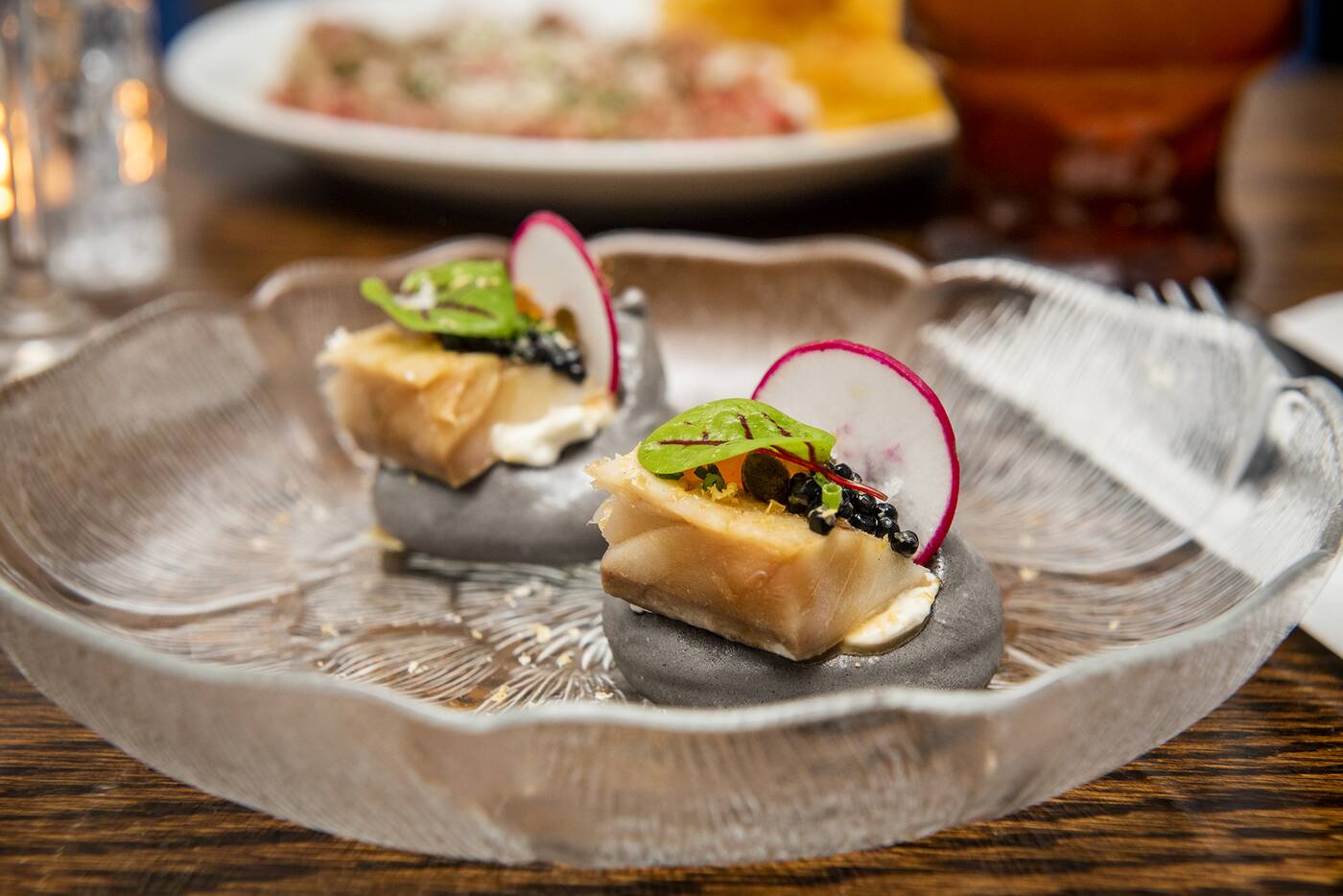 Smoked pickled mackerel ($8) rests on a melt-in-your-mouth squid ink meringue with mullet roe and horseradish creme fraiche. It’s a bit of an intimidating bite, especially with the slate colour, but the flavour combination is familiar, if potent. 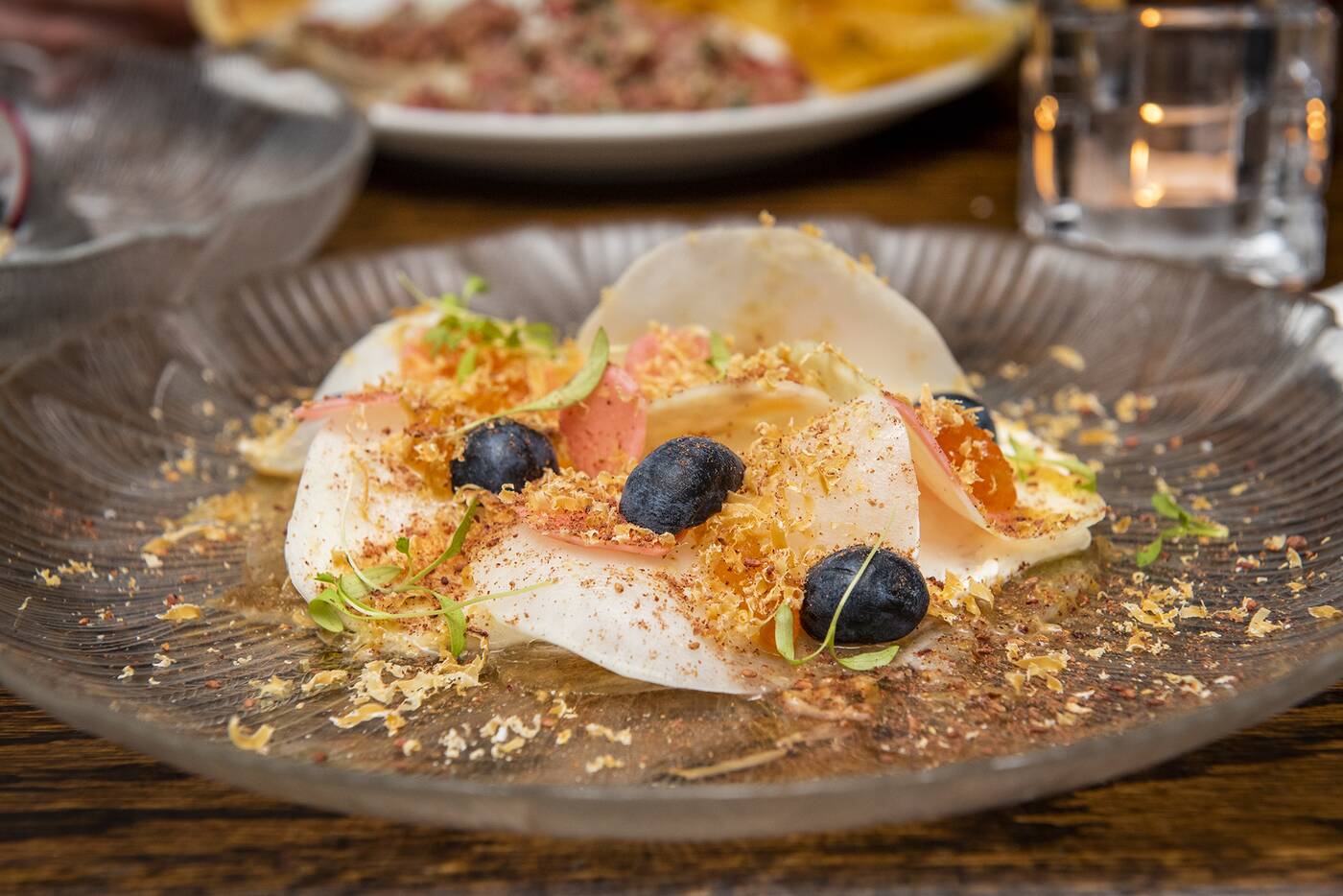 Halibut crudo ($15) is almost unexpectedly meaty, on a bed of smoked creme fraiche and piled with shaved kohlrabi and salmon roe. 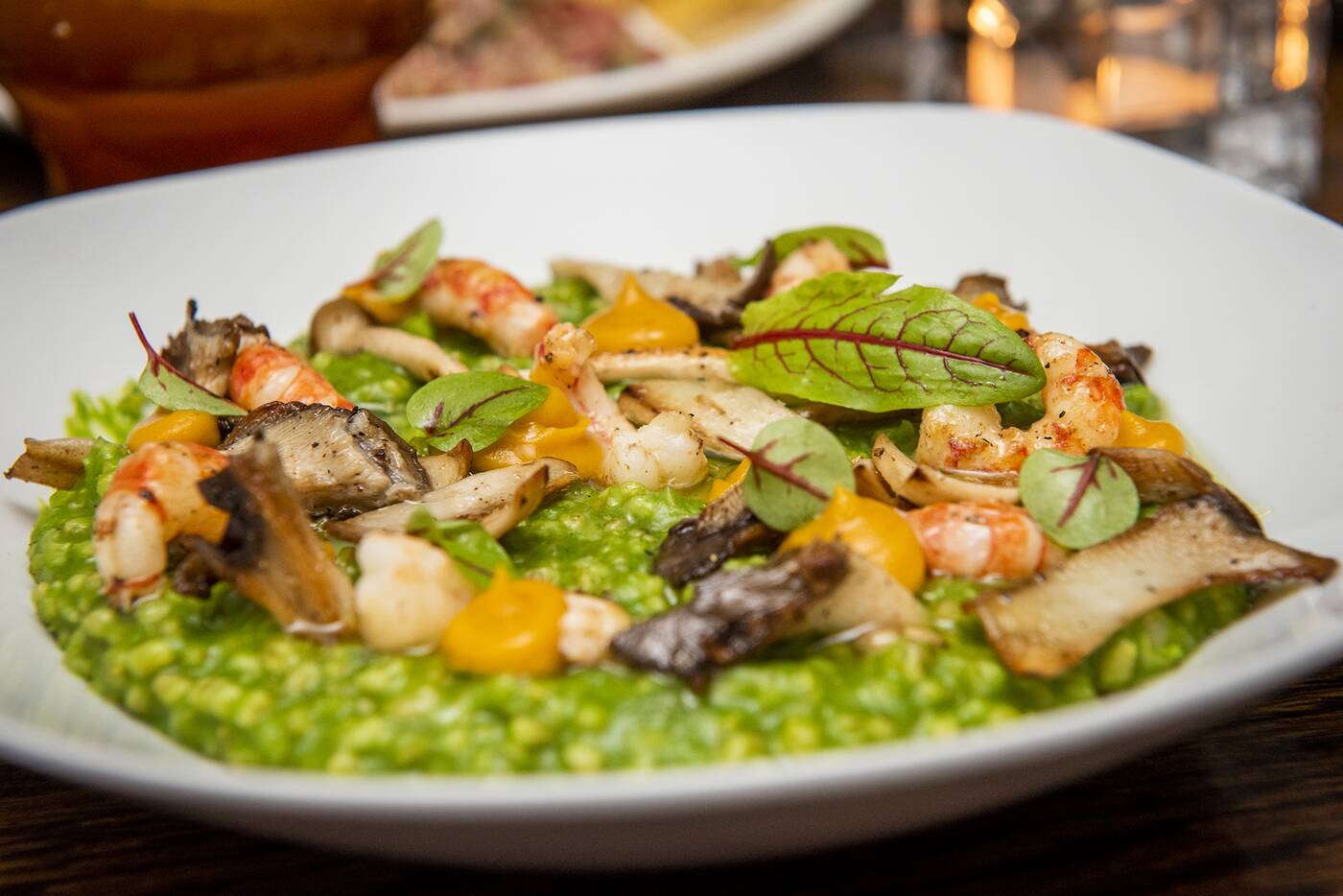 Spinach skirlie risotto ($15) is a take on a Scottish dish of steel cut oats, fat, onions and seasoning, similar to a risotto, infused with a spinach puree. Field mushrooms and a butternut squash puree add wonderful earthiness, but B.C. sidestripe shrimp star. 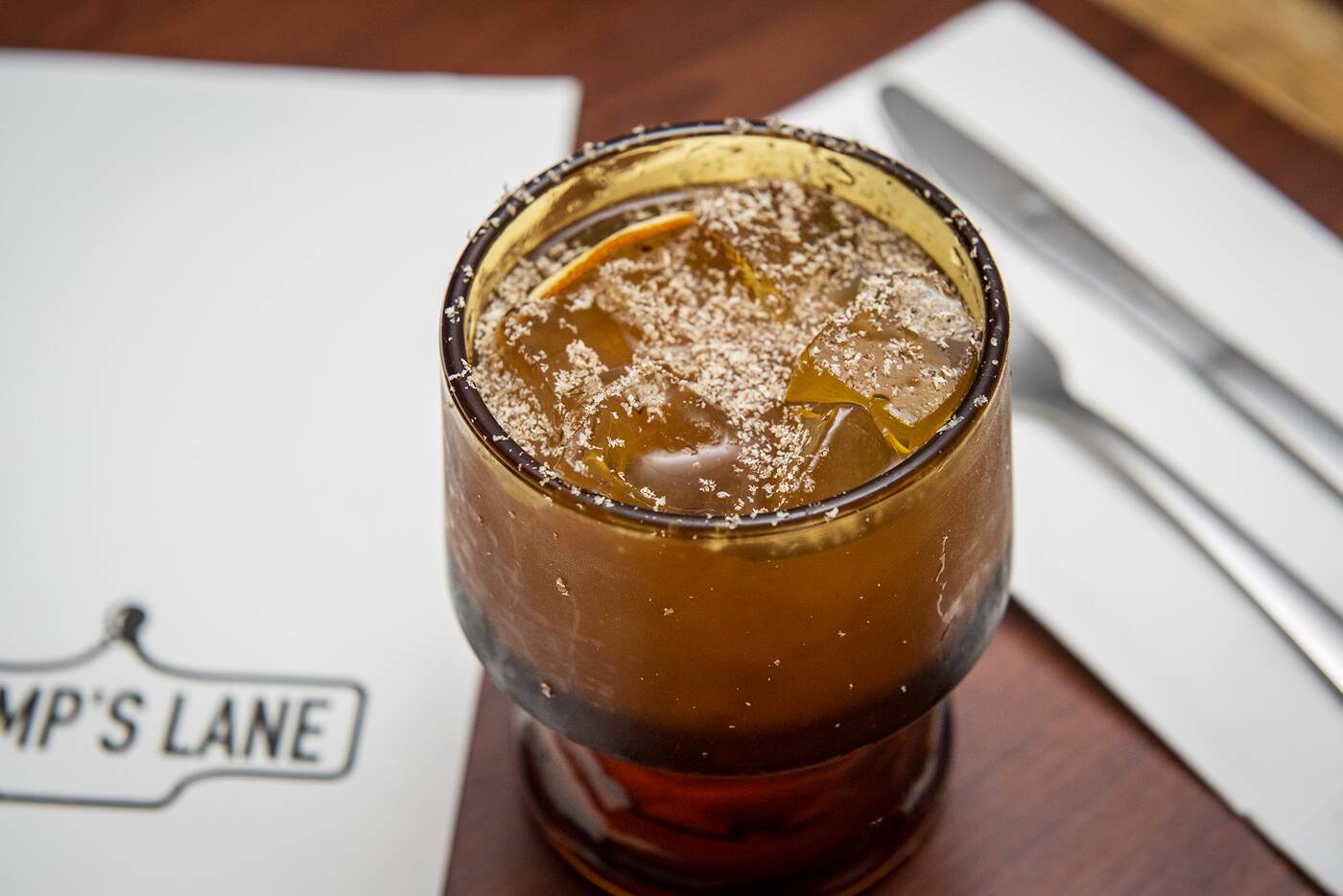 A Black Crow Sour ($12) is a take on a Blackbird with Jameson, Amaro Montenegro, maple syrup, and nutmeg. 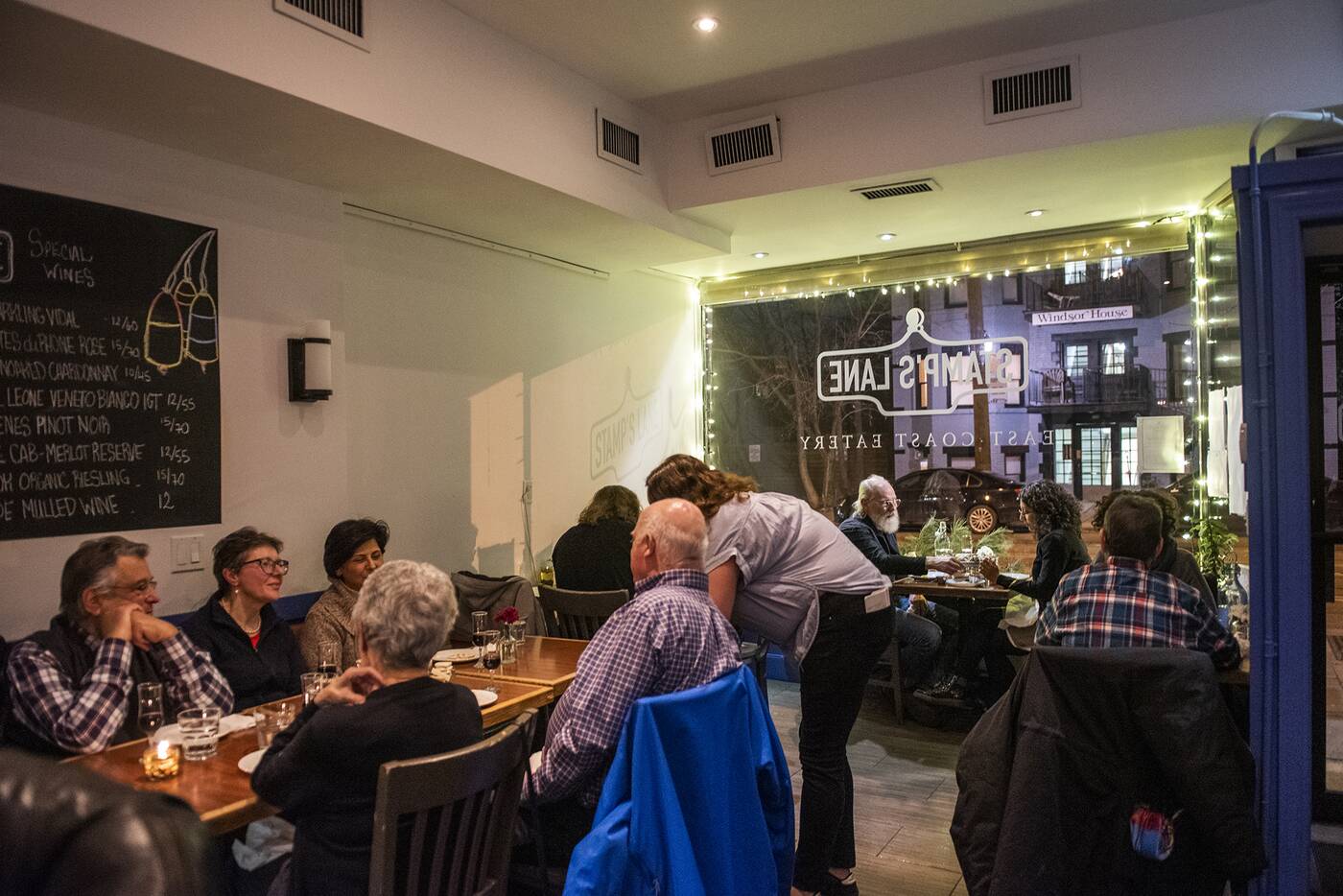 Headed up by Chef Will Smeaton and Jason Huang, Stamp’s Lane is named for a St. John’s street, which used to run through the Stamp farm owned by Smeaton’s great grandfather. 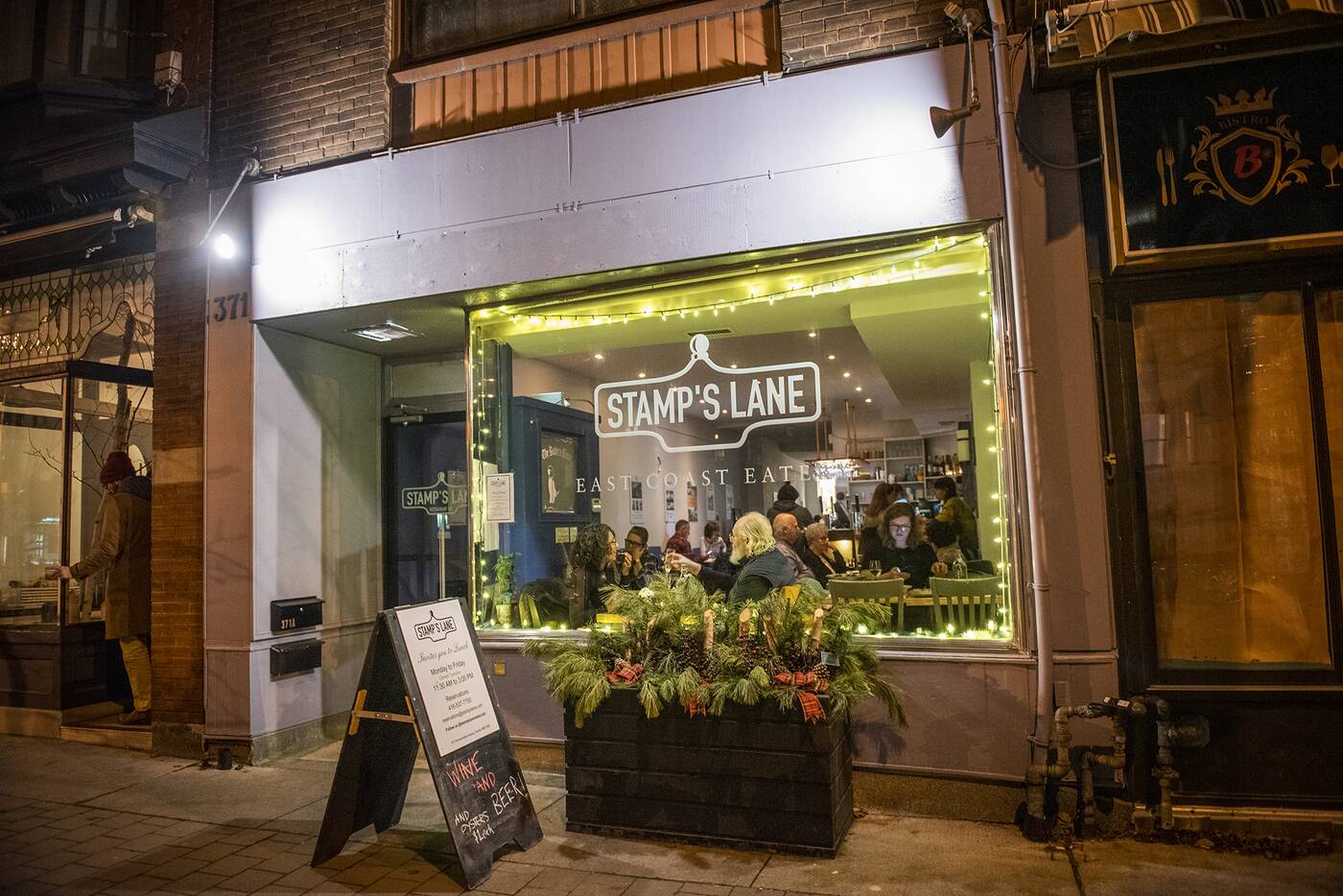