I love fish & chips. Some nights, I swear, no other meal will do. It's definitely a deep fried weakness of mine along with... well, pretty much anything else that's been deep fried. Some readers might already know this after a recent review I did of Harbord Fish & Chips , which was a VERY positive one by the way. But there's a new game in town kids, and it's even CLOSER to my house than Harbord! Right at the corner of Denison and Augusta facing the park now stands Somethin's Fishy Fish & Chips... a rather unfortunate choice of name, but the food could still be good, right? 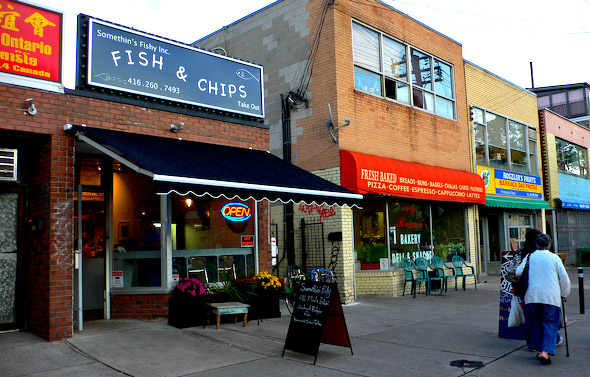 Only about 2 weeks old now, this small chippie joint offers all the standard fare you'd expect from such an establishment... Halibut, Haddock, Cod, Salmon, Shrimp and even Talapia, all served over a healthy pile of Belgian style fries . Nothing wrong so far... but how does it taste? 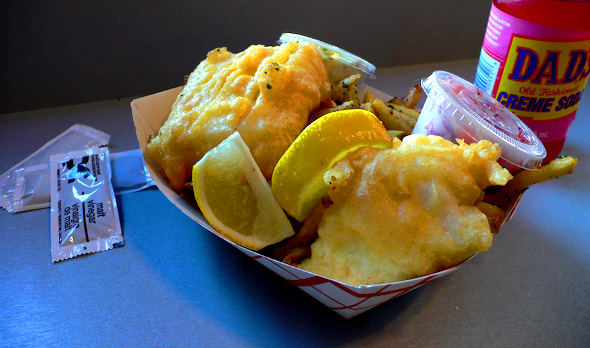 Well, I went straight for the Halibut (as per usual) and I have to say that it was some of the tastiest and freshest fried fish I've had in this city. Meaty, moist, and perfectly cooked, with a tasty batter to top it off. Not quite as crispy as I usually like it, but you can't win 'em all, right? Oh, and the fries: simply wonderful. Somewhat thinner than I'm used to, but with great flavour and a nice little spice to them. Dip them into a little bit of their homemade tartar sauce, and you'll find there's really nothing you can complain about. Simple and delicious. 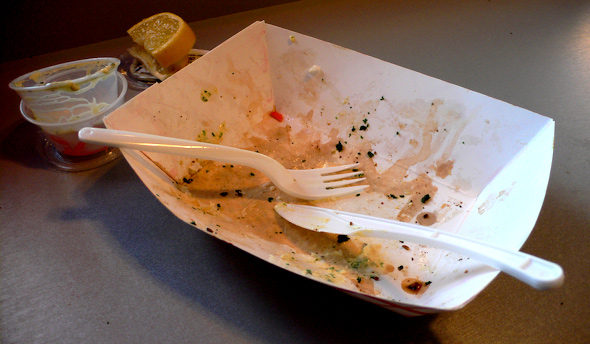 I suppose this image speaks for itself really. Having been open for only two weeks, I was expecting far less quality and a bit of insanity to be honest... but they dish out a great meal already. And as time goes on, I'm sure they'll only get better. Now about that name...