Smoke's Weinerie is an offshoot of Smoke's Eaterie, which also includes Smoke's Poutinerie , and the soon-to-be Smoke's Burritorie . (No, despite what it sounds like, this is not a Dr. Seuss story.)

Located on Spadina just north of College, this is the second ever location of this hot dog extension of the Smoke's brand (the first opened in Dartmouth, Nova Scotia). 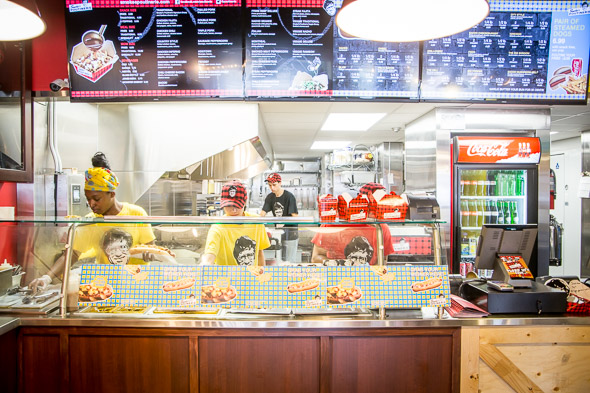 There isn't really a Smoke (he's a made up character who vaguely resembles a middle aged Robert Redford wearing specs - you've seen the stickers), but there is a man behind the chain: CEO (Chief Entertainment Officer, that is) Ryan Smolkin, who founded Smoke's in 2009.

The franchise has since expanded rapidly and now it's entering the wiener business. 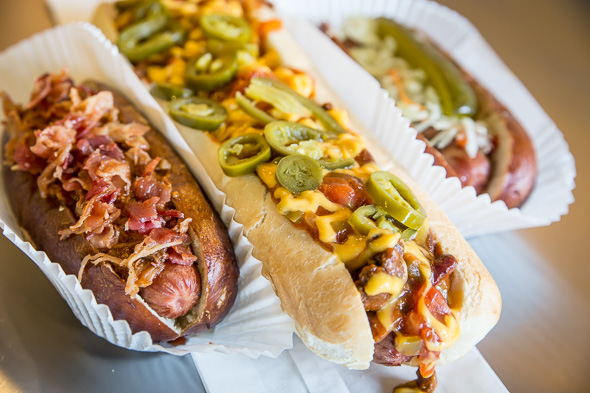 This particular location has two distinct sides; one is the poutinerie and the other half the weinerie, with an industrial look of concrete blocks, custom-made plumbing pipe stools and tables that look like wooden crates topped with sheet metal. Although the seating is split, you order and receive food, whether poutine or wiener, from the same back counter. 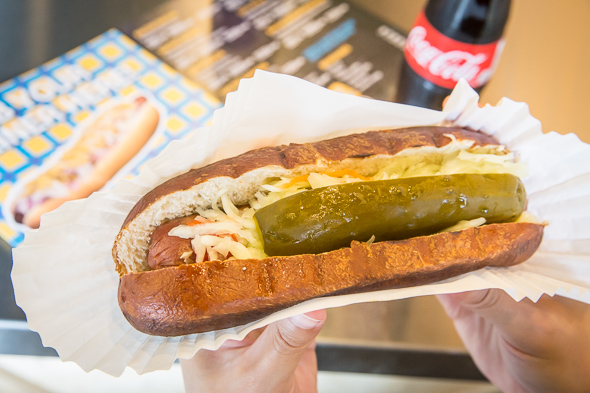 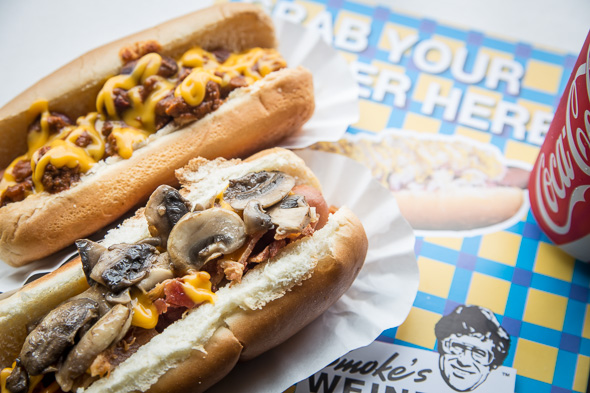 I'm told popular styles so far have been Chili-Cheez, with house-made chili and cheddar cheese sauce, and the Big Porker, with Chipotle pulled pork and double-smoked bacon. 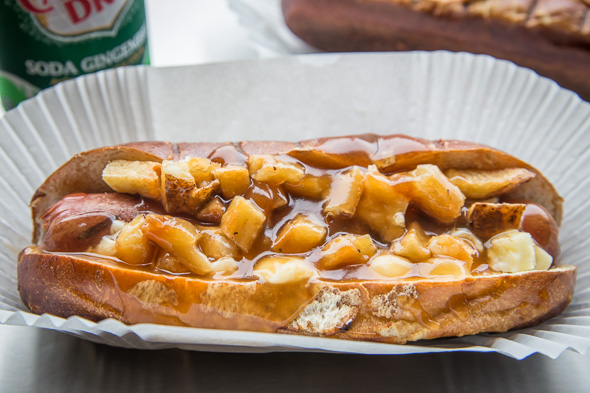 There is even a Poutine Dog, which contains bits of hand-cut fries, Quebec cheese curds and gravy. 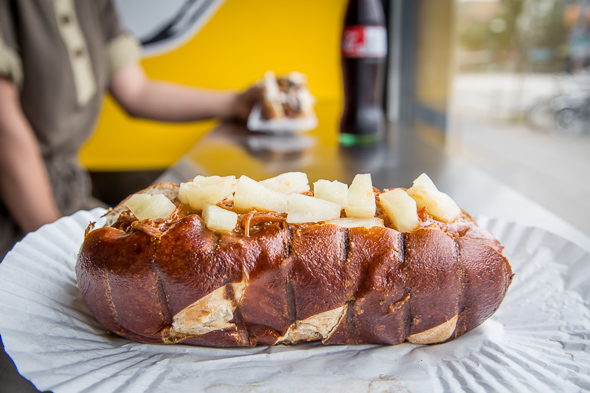 My friend's fave of the kinds we try is the Hawaiian, with Chipotle pulled pork and pineapple (mostly because he likes pineapple). 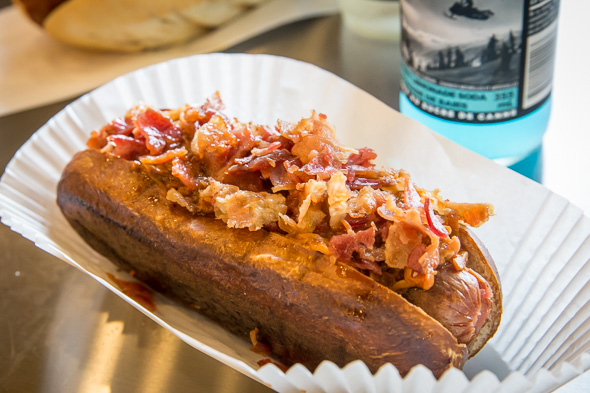 For me, the pretzel buns that only come with the premium Âź-lb dogs are a highlight; they're specially made for the weinerie, and complement the sausage perfectly. They taste like a soft pretzel, with a pleasant hint of sweetness. 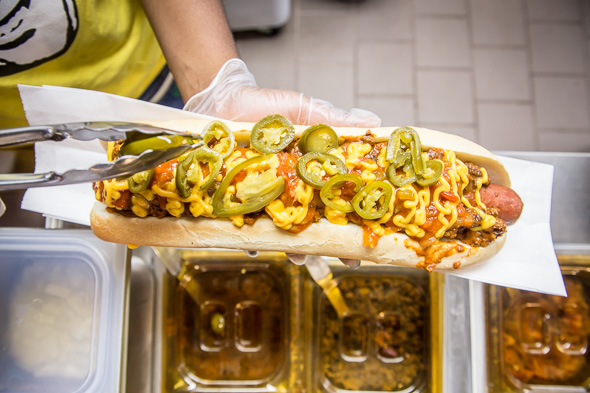 If you really want a challenge or have a ridiculous appetite, try the foot-long. We attempt to conquer the Nacho Nacho (homemade chili, salsa, cheddar cheese sauce and jalapenos) and fail miserably. 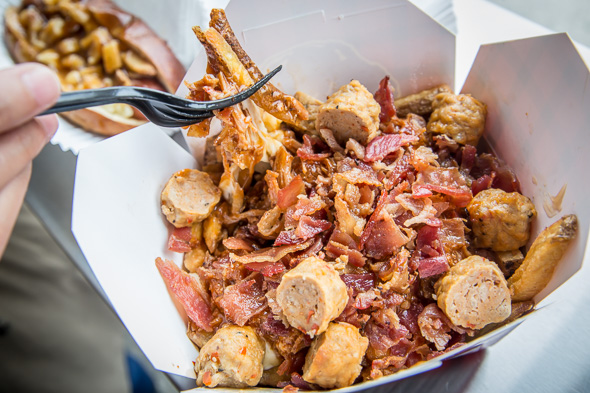 The poutine menu here is the same as other locations, with the exception of the specialty "secret menu" item specific to this spot. The Varsity is a reverse of the Poutine Dog - instead of poutine on the hot dog, there are - you guessed it - chopped up hot dogs on the poutine. 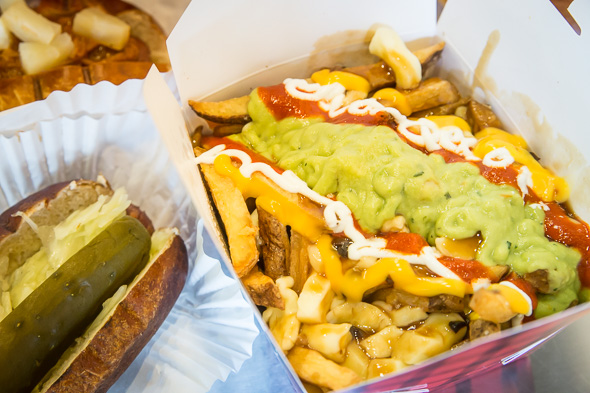 Unlike the weinerie, there are vegetarian poutine options that come with a veggie gravy. I particularly like the Veggie Rainbow ($8.99 meal size, $12.99 "wow" size), with sriracha, cheese sauce, guacamole and sour cream in addition to the gravy and curds on the fries. 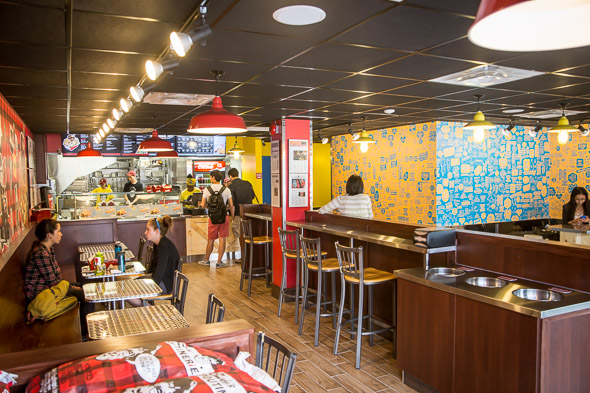 It'll be interesting to see how this place does with both Fancy Franks and Let's Be Frank in the vicinity. There at least appears to be one diehard fan; as I leave, I overhear a guy sitting at the window tell his dining companion, "I love this place. I'm so happy it exists." 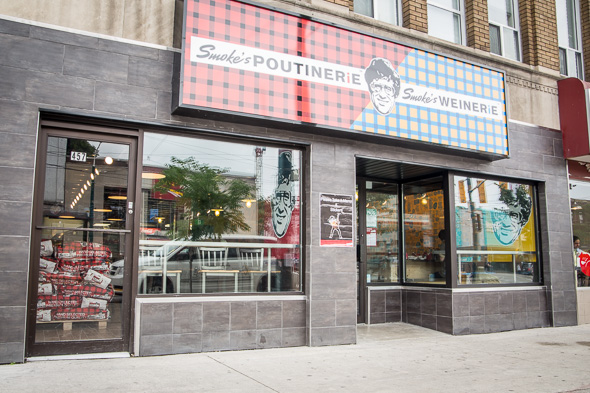