Slayer Burger is a smash burger joint with a vague rock and roll theme.

It's a shrine to carbs that serves high-end locally made Famiglia Baldassarre pasta as well as burgers, shakes and salads. 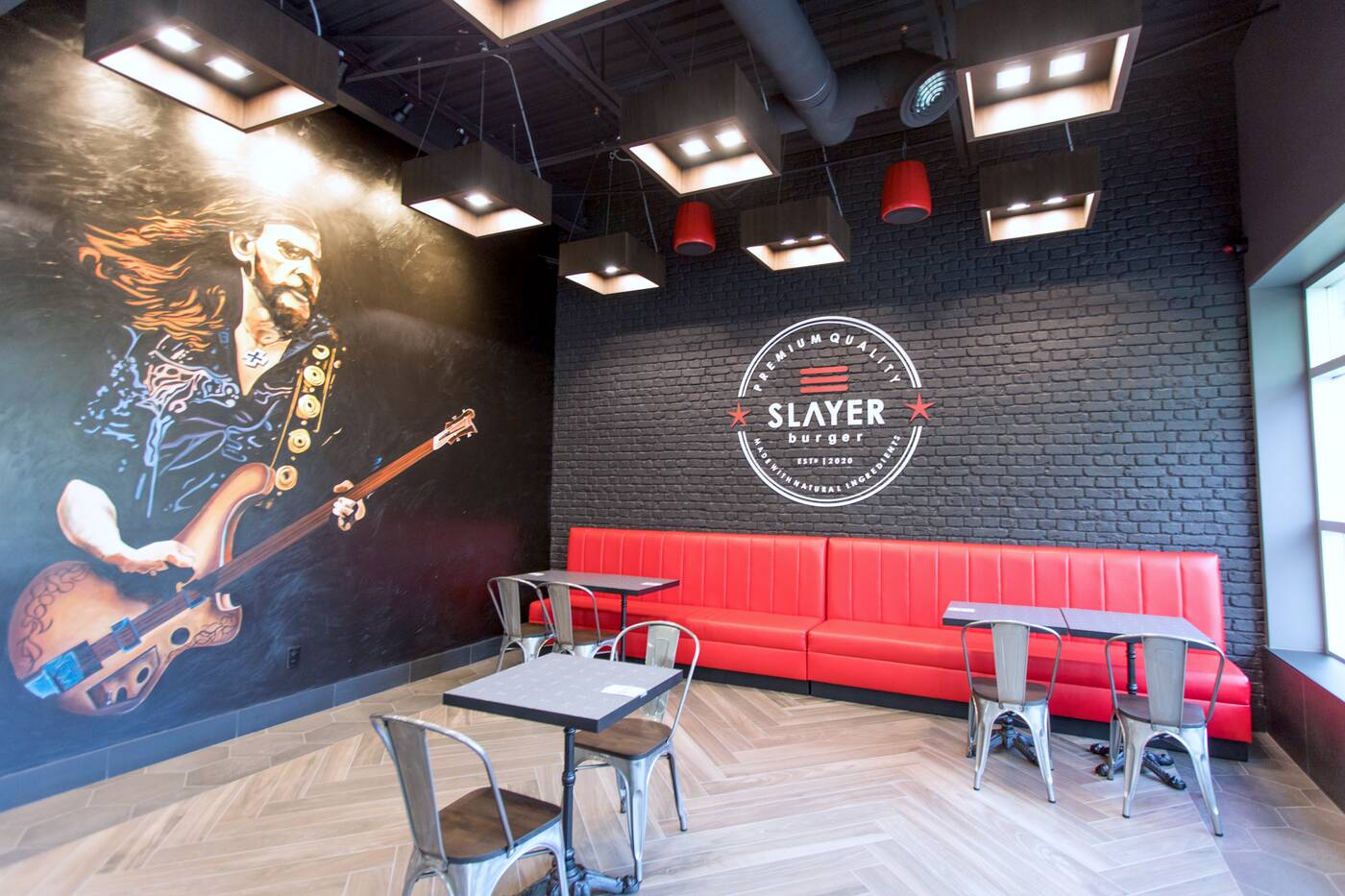 One wall is decorated with a huge mural of Lemmy from Motorhead done by a local artist. 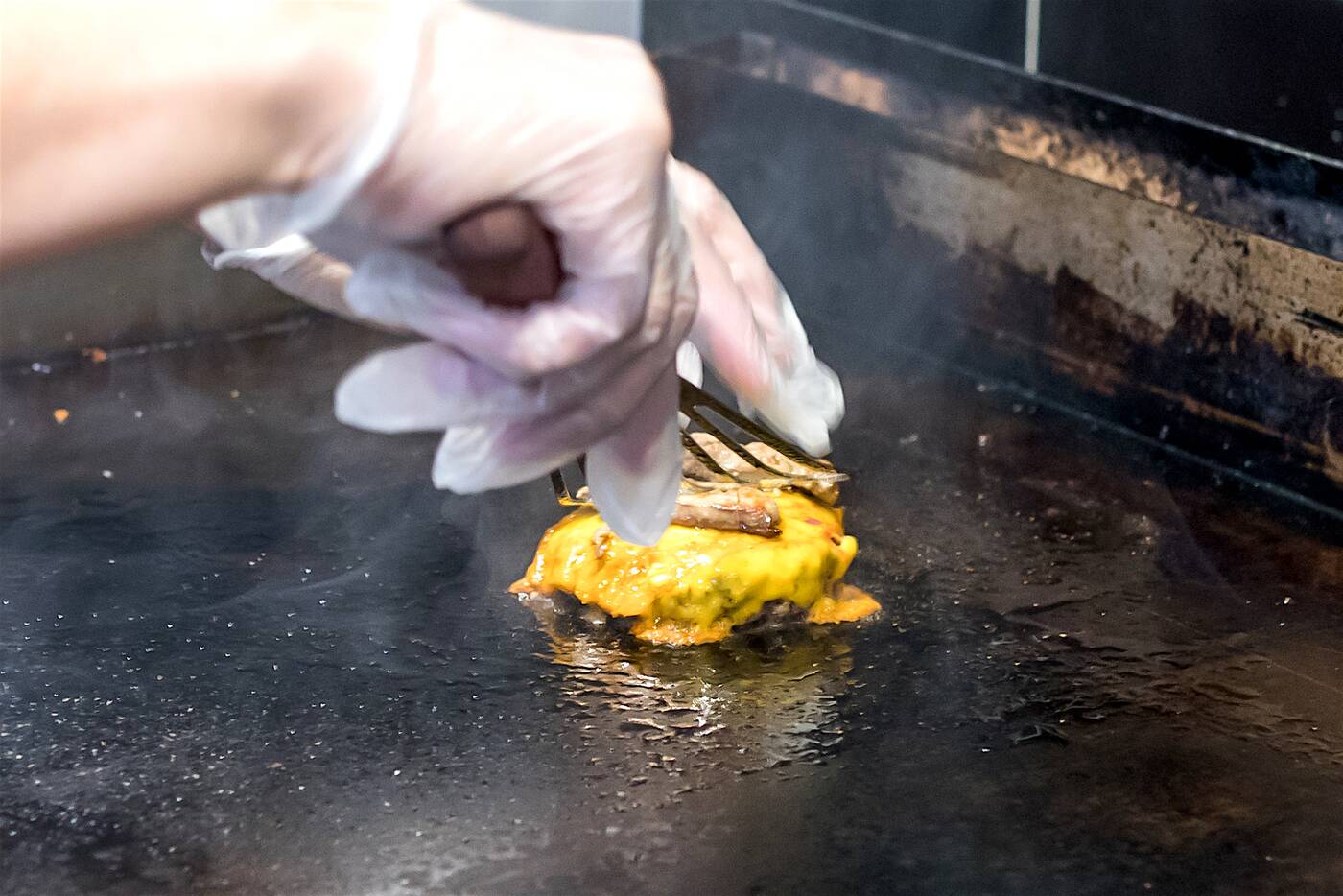 While they are branded as smash burgers and the patties are relatively thin, these are a little thicker than your average smash burger with a nice crust, but not so much of a crispy thin edge like many others. 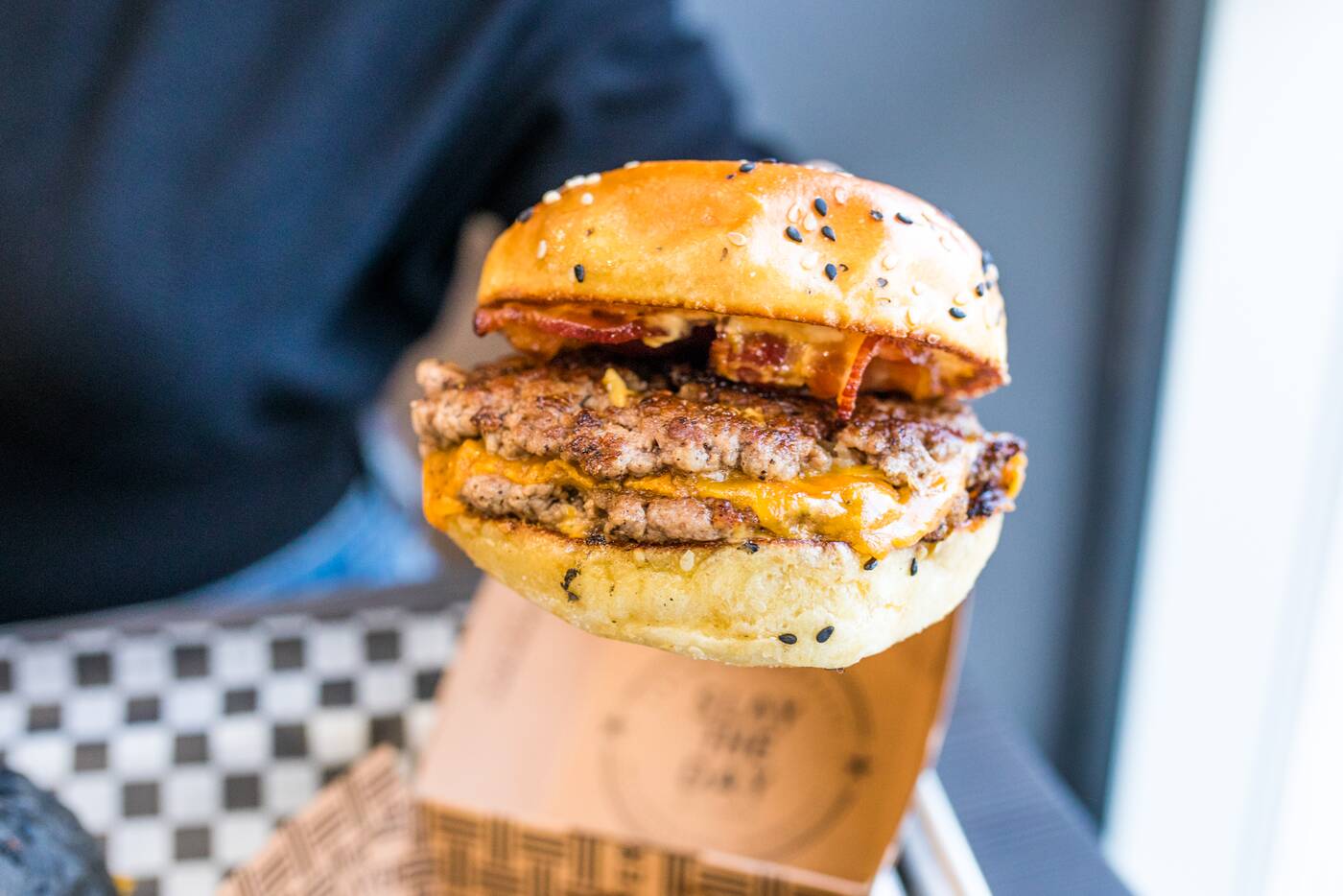 The Slayer Burger ($14.99) has two Canadian AAA beef patties, cheddar, caramelized onions, bacon and Slayer sauce on sesame buns made locally by Padaria. The meaty seared beef is intensified by the addition of smoky, crunchy bacon, and I can see why this is their signature. 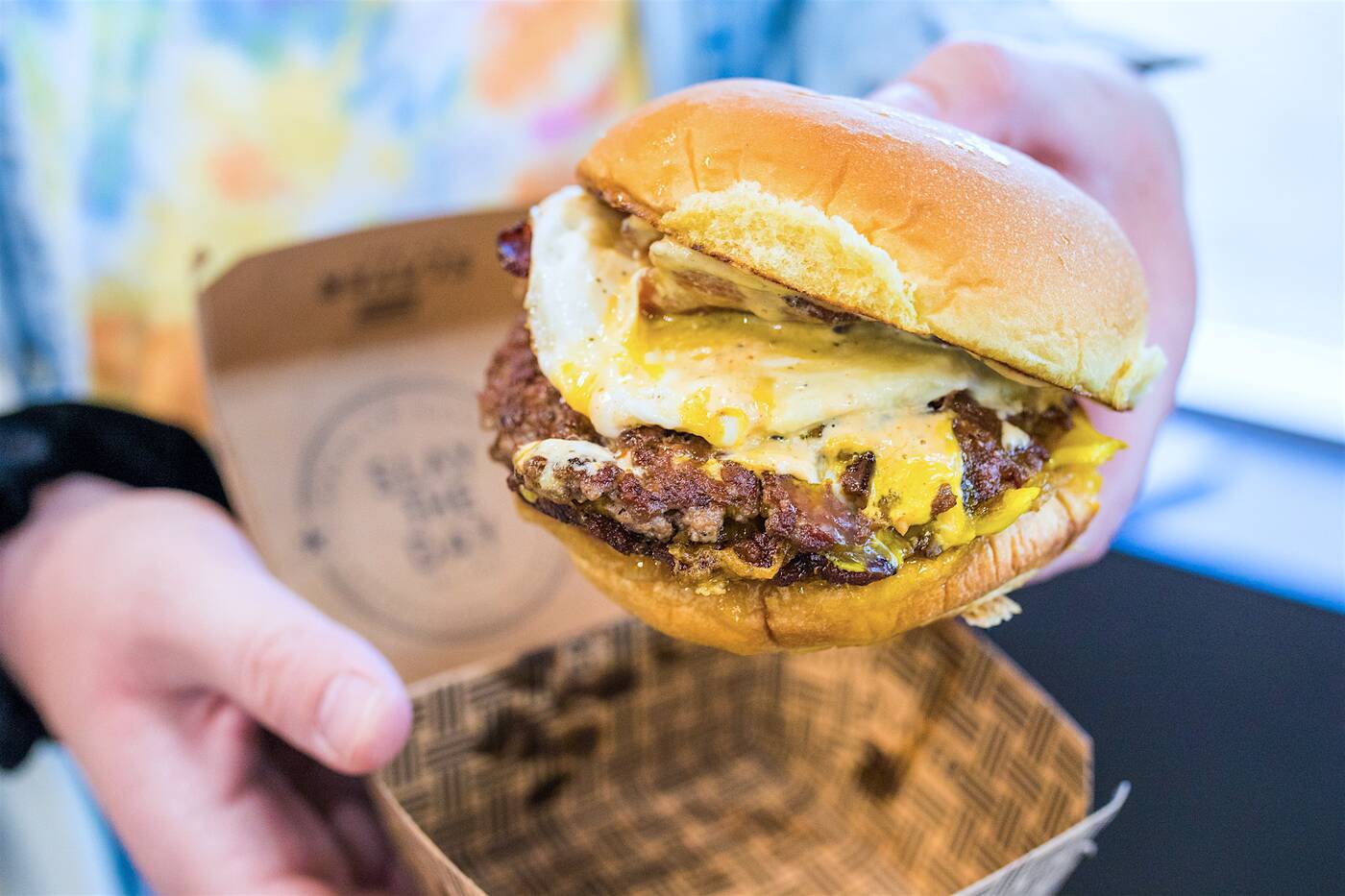 You can also add on options like an egg for $1.99, though truly everything is customizable here. 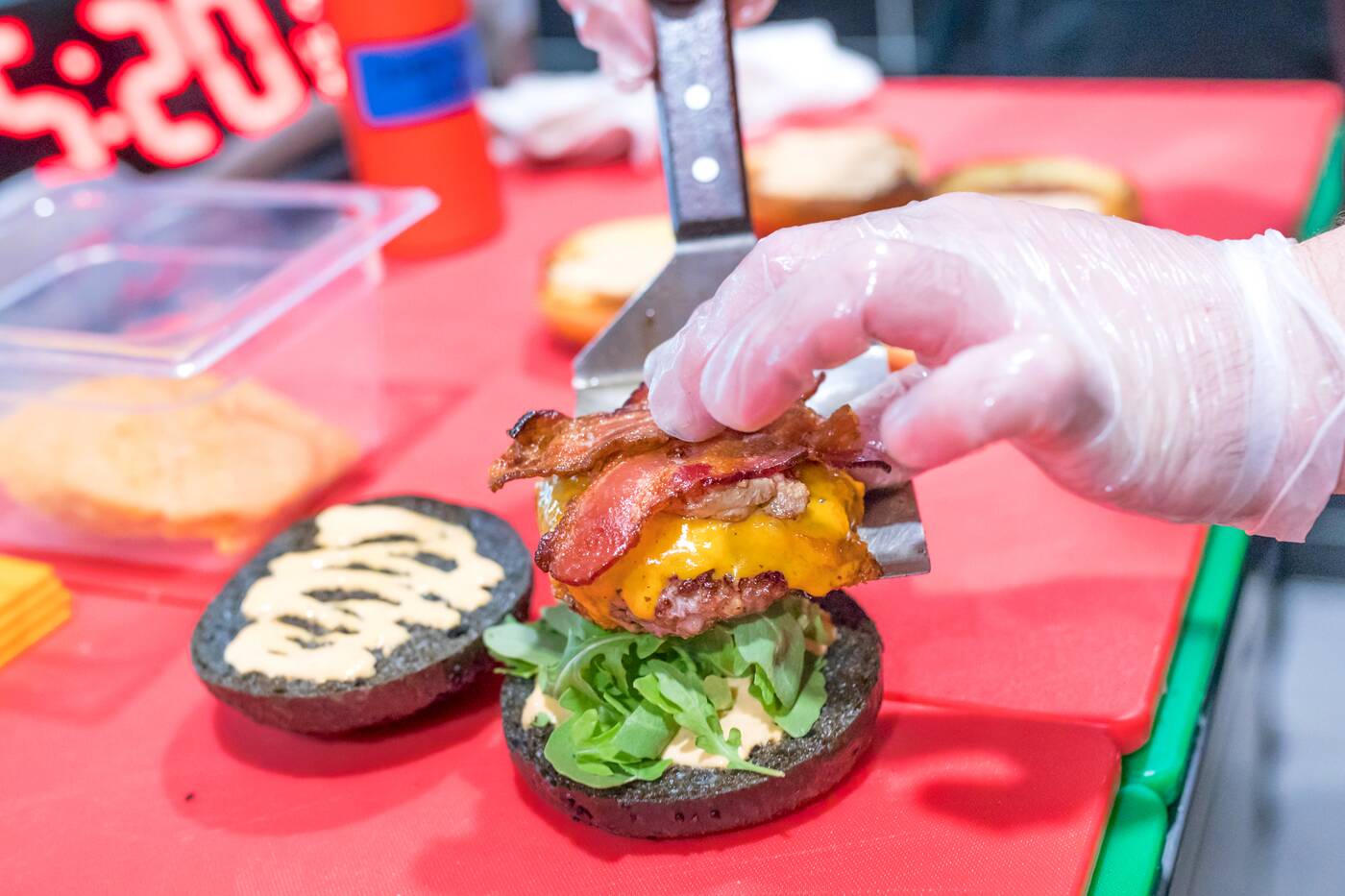 The First Degree Burger is the outrageous option here, priced at a whopping $33.99. Unlike some burgers, its stunt isn't so much its size or overwhelming number of toppings, but rather the luxe ingredients of Wagyu and foie gras, presented on a charcoal sesame bun with bacon, fried onions, baby arugula, crispy parmesan and Slayer sauce.

Layered against competing elements, it's hard to taste the true value of the Wagyu though it is rich and meaty, and the parmesan crisp while delicious overpowers the indulgent foie gras. The piece of foie gras could be larger and more deeply caramelized for more deep umami flavour. 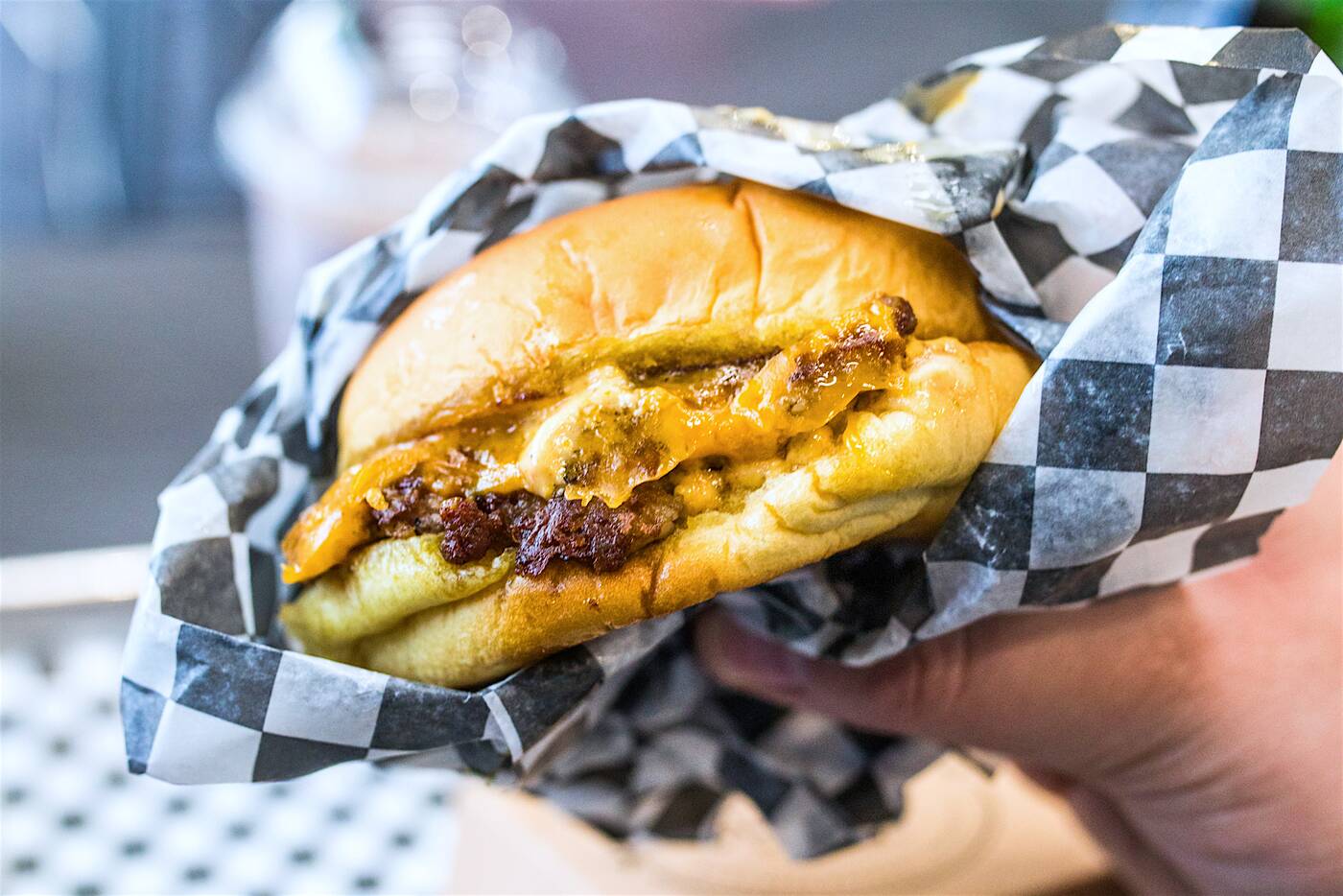 A Slit Burger ($7.99) deserves a name change, but breezing past that it's a pretty satisfying little burger, their most restrained option with a Canadian AAA beef patty, cheddar, caramelized onions and Slayer sauce on a soft potato bun. 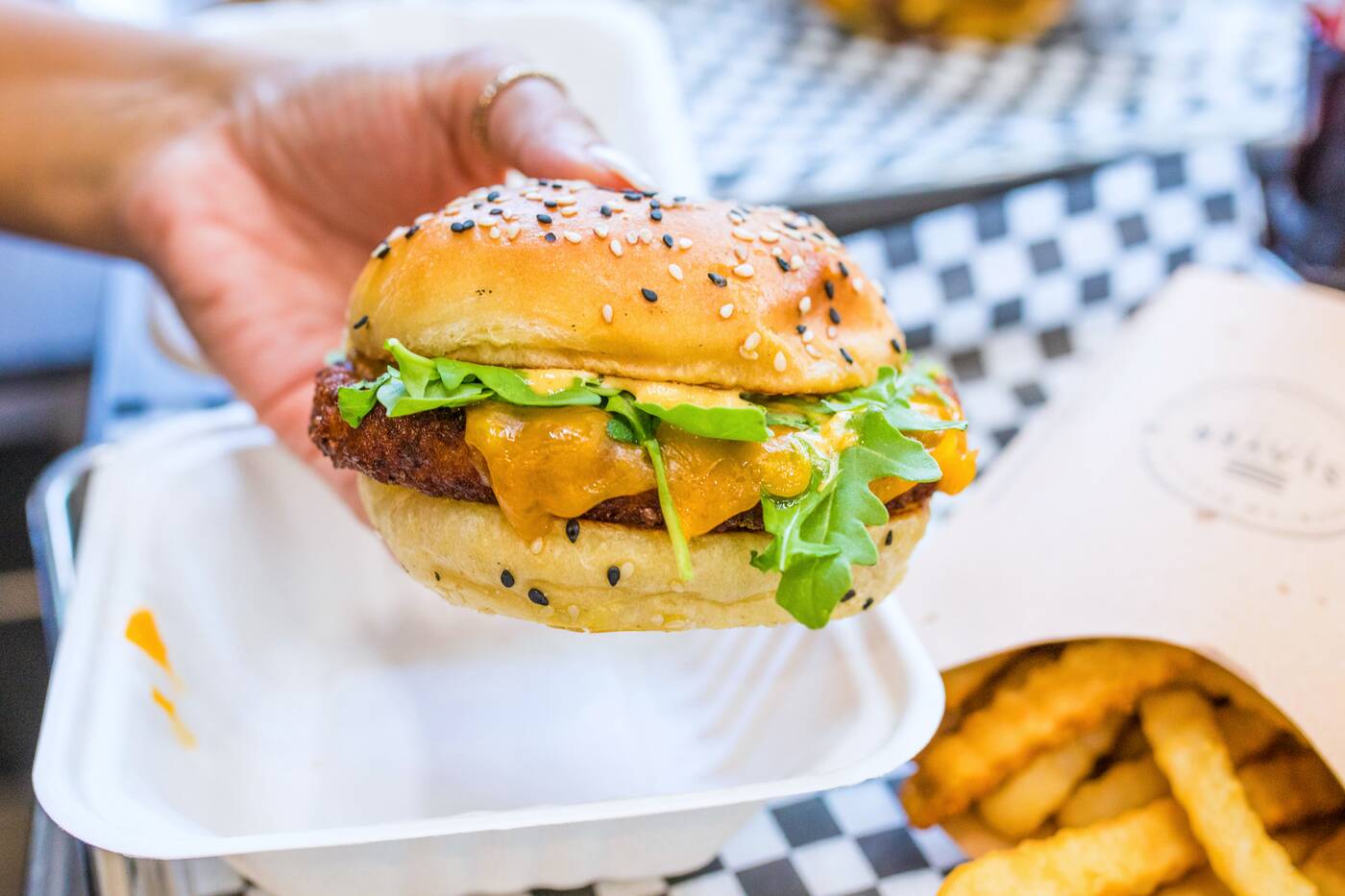 A Slayer Fried Chicken Burger ($11.99) has a ground chicken breast patty that's breaded, fried and finished in the oven, which feels to me like a drier and less flavourful option than a typical whole breast. It also comes with the typical cheddar, arugula and Slayer sauce on a sesame bun. 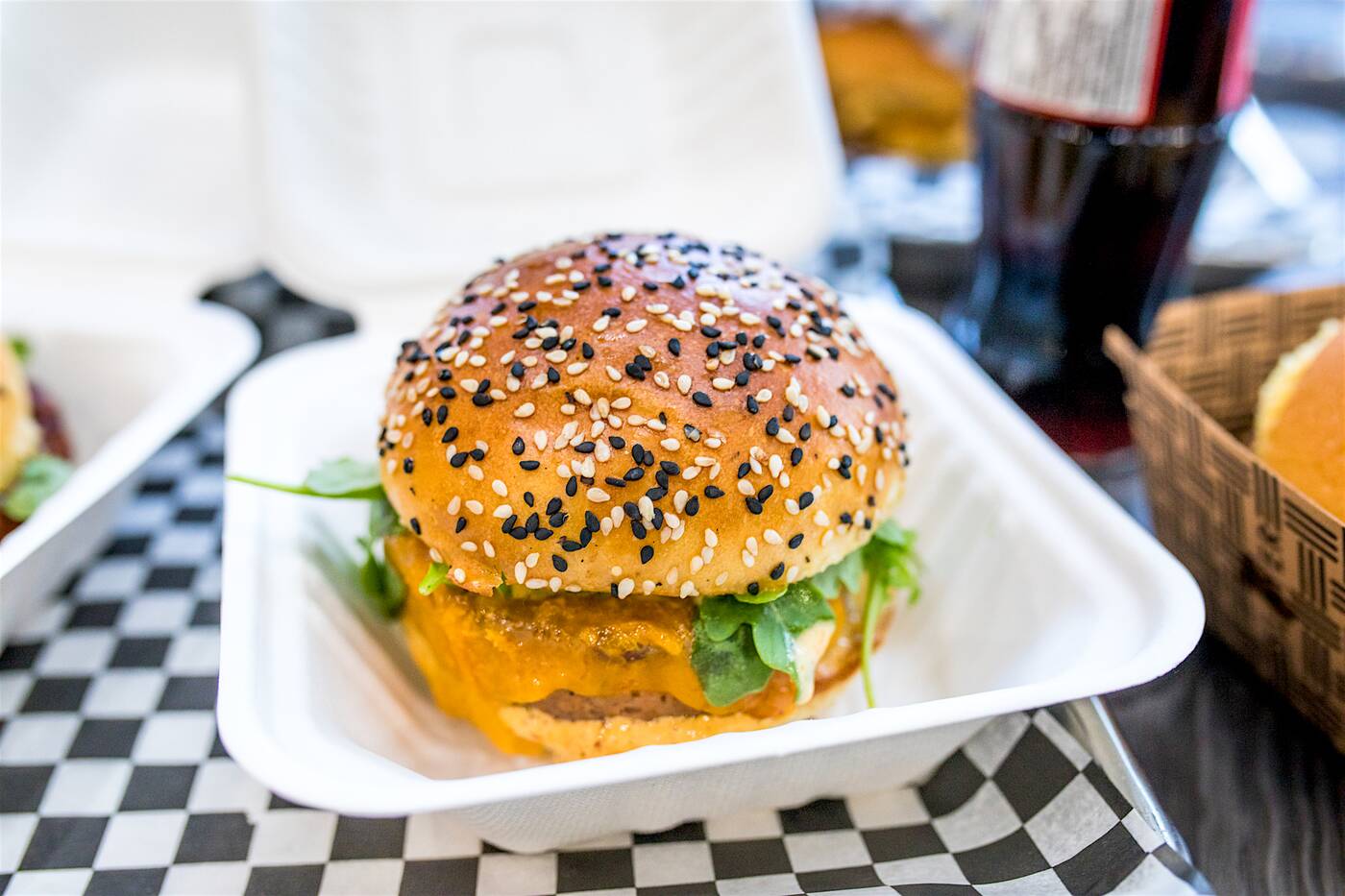 There's also the option of a vegetarian Beyond Burger ($13.99) with cheddar, baby arugula and Slayer sauce on a sesame bun. Take care to note none of the buns here are vegan. 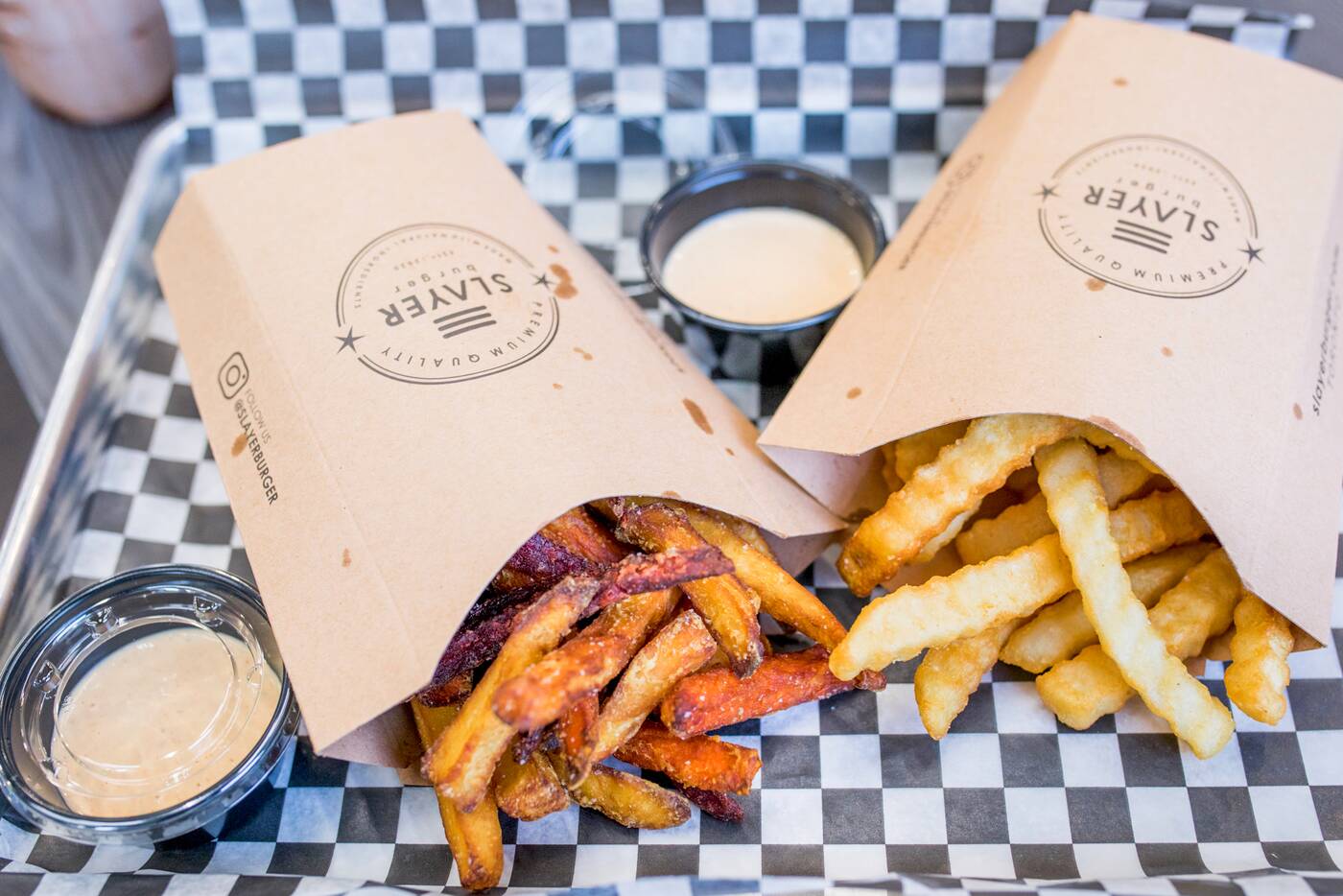 Crinkle cut fries ($4.99) are decent but it's worth shelling out $6.50 for the root veggies. A mix of beet, parsnip and carrot is sweet, nicely browned and well seasoned. 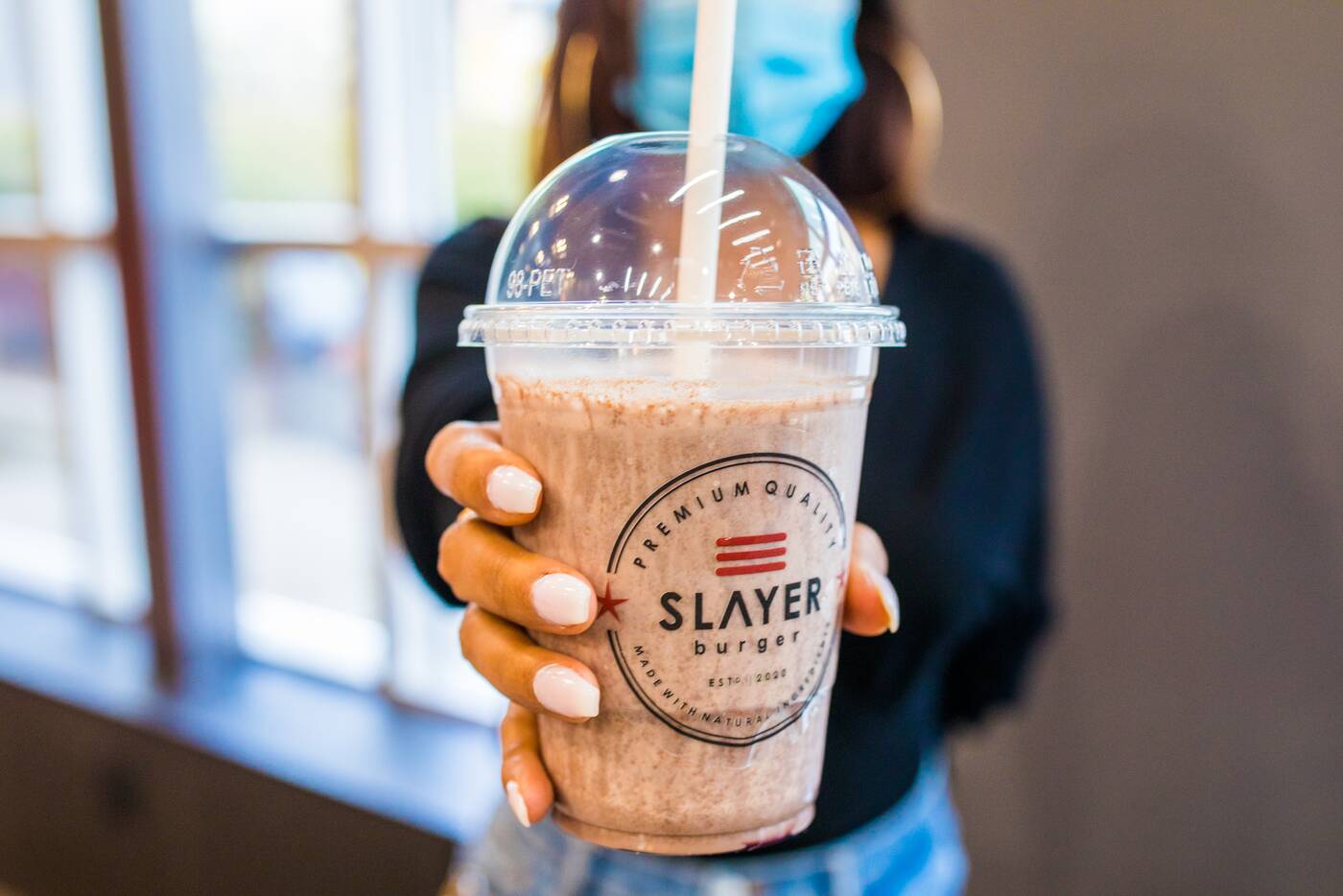 Wash everything down with thick shakes starting at $7.99. 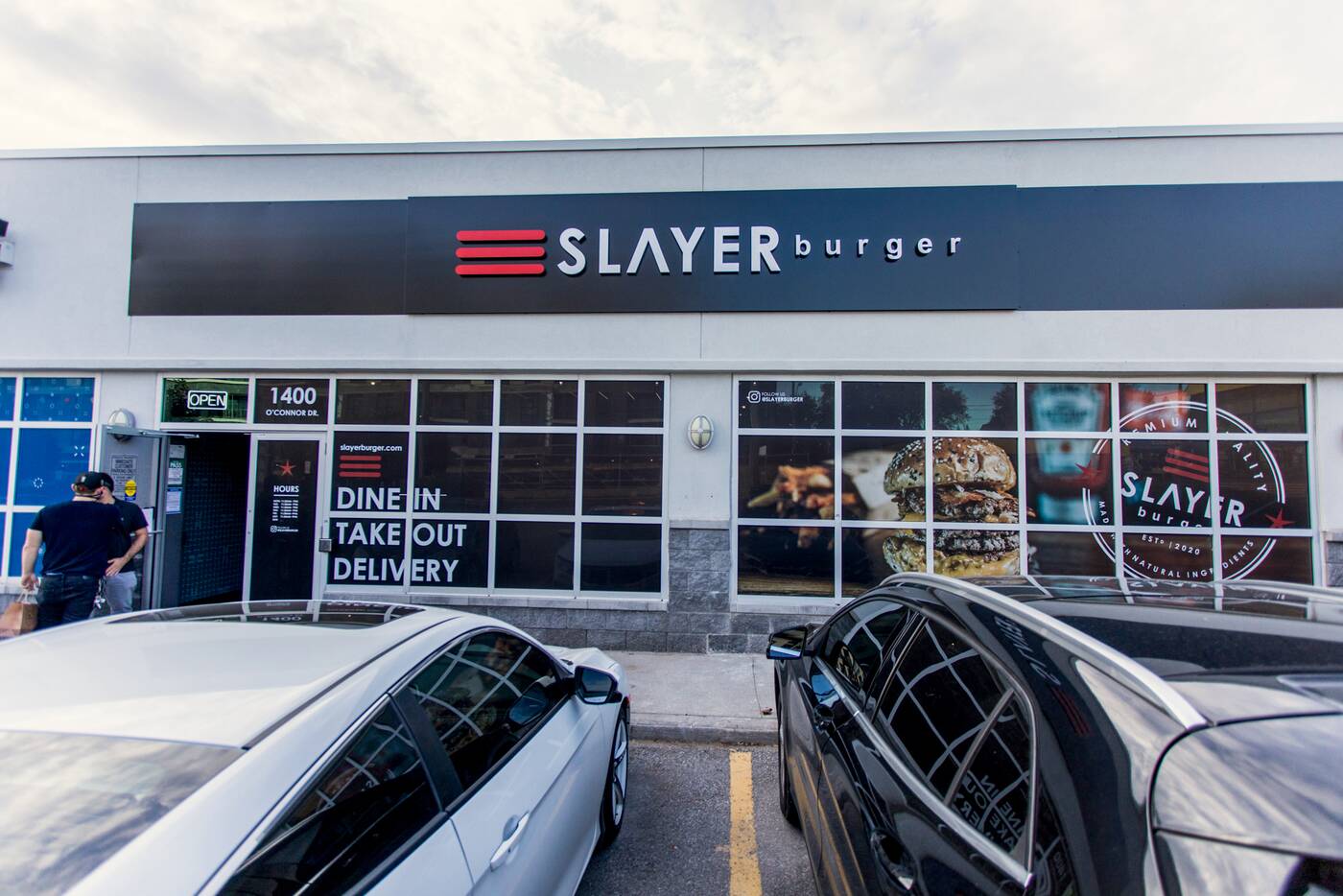