Breakfast and brunch restaurants have a special place in North American culture. They provide an experience, not to mention a meal, that is of a decidedly different flavour than that of a dinner or even lunch restaurant. Unfortunately for a vegan like myself, purveyors of purchased brunch typically rank around the same level as steakhouses when it comes to veggie food.

When a group of my friends have been up late (or all night) partying it up, there always inevitably comes a time when enough stomachs are rumbling to trigger the "Breakfast? Breakfast!" reaction and pretty soon everyone's got their shoes and coats on.

There's little about food that really makes me envious anymore, being a good 7 years into being vegan, but when everyone else is chowing down on coffee and just-like-mom's pick-me-ups, I'm always left to wash down my bland plate of fries with cups of jealousy. Actually, this has lead me to my current habit of eating fries piled with every vegan condiment that is made available, relish in particular.

But I digress, glowing in the awareness that today is as new a day as ever, with new opportunities laying themselves before me. What particular good fortune has today brought me? Vegan freaking breakfast!!@#! Courtesy of one Sadie's Diner .

(Yes, that is their MySpace.) 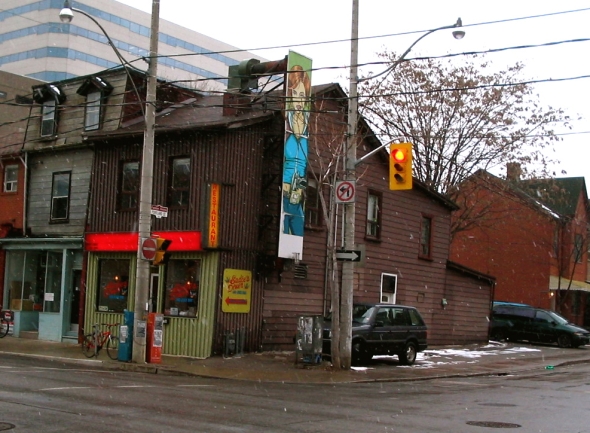 Alright, alright, I recognize that vegan breakfast may not actually seem quite as exciting as I just made it out to be... but try to understand where I'm coming from here. I'm the sort of person who loves diners and greasy spoons and they're one of the only items on my very short list of things I miss since going vegan.

Recently opened a square block from Bathurst and Queen, Sadie's Diner is (obviously) a diner, but it's most definitely not a greasy spoon. Sadie's captures the essence of the '50s diner to an almost idyllic Archie Comics degree and then puts a new-school twist on every part of it. The most important part, of course, is the menu... so let's talk about that first.

The menu is up on their MySpace profile but that menu is a little old and doesn't include everything they offer. The all-day breakfast includes vegetarian and vegan versions of the traditional breakfast plates - either eggs served any style or tofu scrambled with peppers and onions, veggie bacon or veggie sausage, homefries and a choice of types of toast. Buckwheat waffles and pancakes are also available (not vegan), and huevos rancheros in both vegetarian and vegan forms. I went with the vegan traditional breakfast, half sausage and half bacon.

I suspect the bacon and sausage are Yves, the common grocery store brand, but I don't really fault Sadie's for that... simulating types of meat is difficult and Sadie's leaves that to the experts while focussing on the home-cooked touches of the food and environment. I thought the scrambled tofu was great, closer to scrambled eggs than anything I can ever remember having, and for some reason the whole wheat toast was incredibly delicious. I don't know what was up with that, I'm not someone who goes around calling toast delicious, but this toast actually was.

Breakfast isn't the only option available, though, and the lunch menu offers a variety of soups, salads, sandwiches, burgers, tortillas and lasagna (not vegan). I figured a good judge of character would be a burger, seeing as it's often central to both diner and vegetarian restaurants. They were out of the bean/coriander salad I'd been thinking about trying, but I got a garden salad alongside the burger. 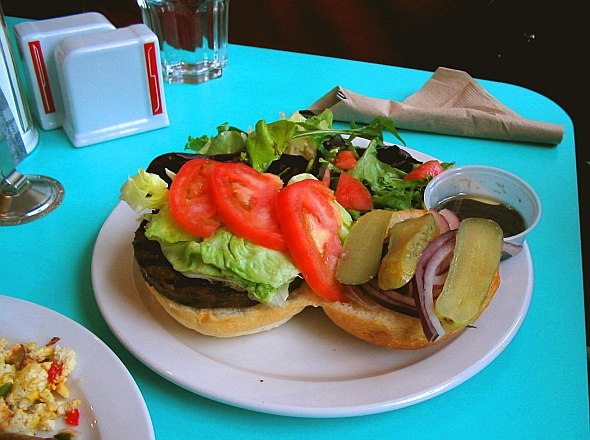 The burger came topped high enough already that it was a little difficult to close, but I piled on the condiments too. I particularly liked their homemade salsa, double points for both the taste and being real enough to make it. The burger was delicious, messy and satisfying (in that order) and the salad was tasty and fresh.

I'd been trying to make up my mind about the drink menu until halfway through my meal. They have a juice bar set up, offering drinks ranging from straight juices and soy milk smoothies to herbal and supplement enhanced drinks. They also serve the usual suspects of a drink menu, though the coffee is fair-trade and organic and they offer a broader range of teas and iced teas.

I didn't come to a breakfast place to feel healthy about my mangoes, though, and had to order the chocolate, peanut butter and banana smoothie. It was extremely delicious, and again I'm pretty sure that's the first time since going vegan that I would've had something like that.

The food was only half the experience, though, as I've been trying to make clear. The sunny front windows, comfy couch seating and general aesthetic are all perfect. Happy music from a variety of decades plays over a pair of speakers and paintings adorn the walls.

Actually, until I walked into the back to admire the glass cases containing the Pez dispenser collection, I hadn't yet noticed the art. When I did, I really liked the way it fused '50s and even late '40s style classic culture imagery with contemporary artistic styles, suiting the diner really well.

It turns out, Sadie's also functions as a rotating art gallery. The art that's currently up on the walls is that of Karina Lapierre-Douglas , and it'll be on display until May 13th.

Special care is taken at Sadie's to be particularly green about things. The take-out containers are recycled and biodegradable, most of the food is organic, and any leftovers are saved from the trash and later used to feed some pigs on a no-kill farm belonging to a friend of the owner.

There were dessert offerings too, but I was stuffed, having had my happy little Jughead moment with all the food. I've never heard of the vegan diner concept being applied before, and I'll admit it's possible it's because I haven't looked hard enough, but the more I think about it the more I doubt that any other place like this exists in Toronto. I'm extremely happy that I heard about Sadie's Diner, because I'm not sure that I would've found it myself and I absolutely 100% definitely will be going back.