Ramen Station is a ramen restaurant in Toronto like no other: it serves up Chinese-style Japanese ramen, and no, that's not a typo.

The noodles served here is a subset of a type of Japanese cuisine called chuka ryori which refers to Japanese food served in Chinese restaurants in Japan. 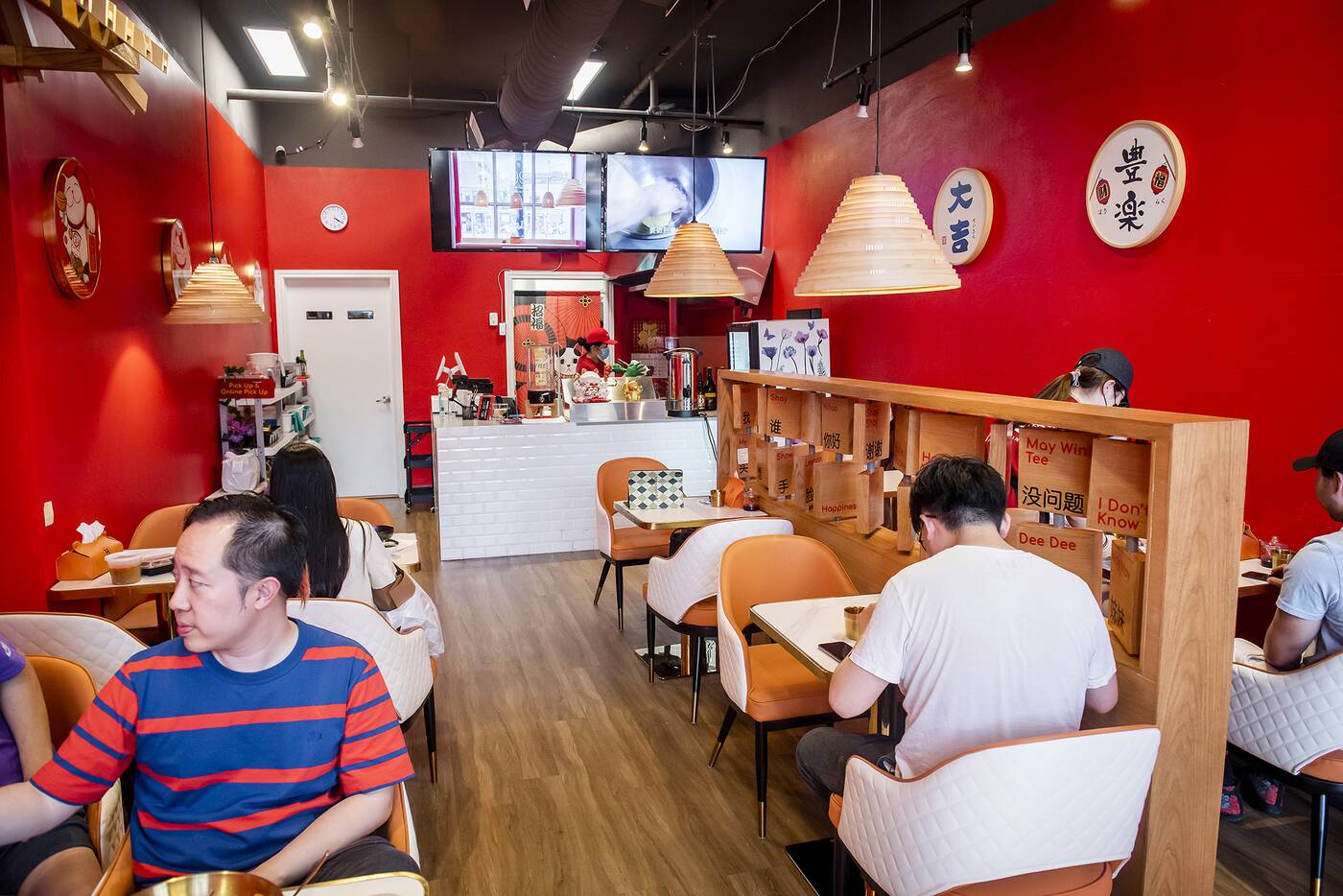 The interior cutely reflects this hybrid of two cultures, with bright red walls adorned with both Chinese and Japanese symbols for good luck. The ample seating space makes for a pleasant dine-in experience. 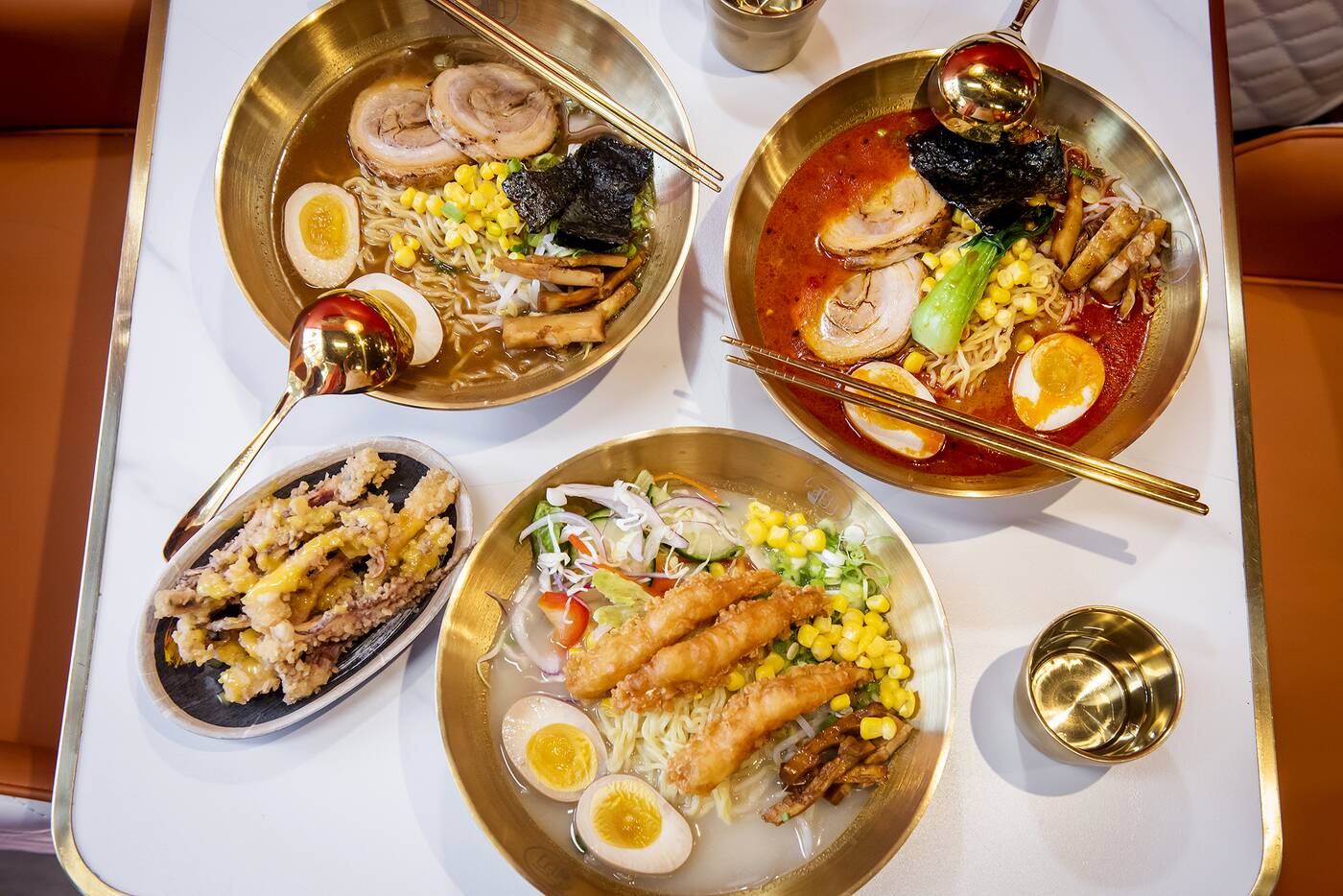 The biggest difference between the Chinese-Japanese ramen and the traditional Japanese ramen is that the latter uses motodare, a concentrated base sauce, that is lacking in the former.

This results in most Chinese-Japanese ramen having a much lighter flavour than its more popular counterparts. 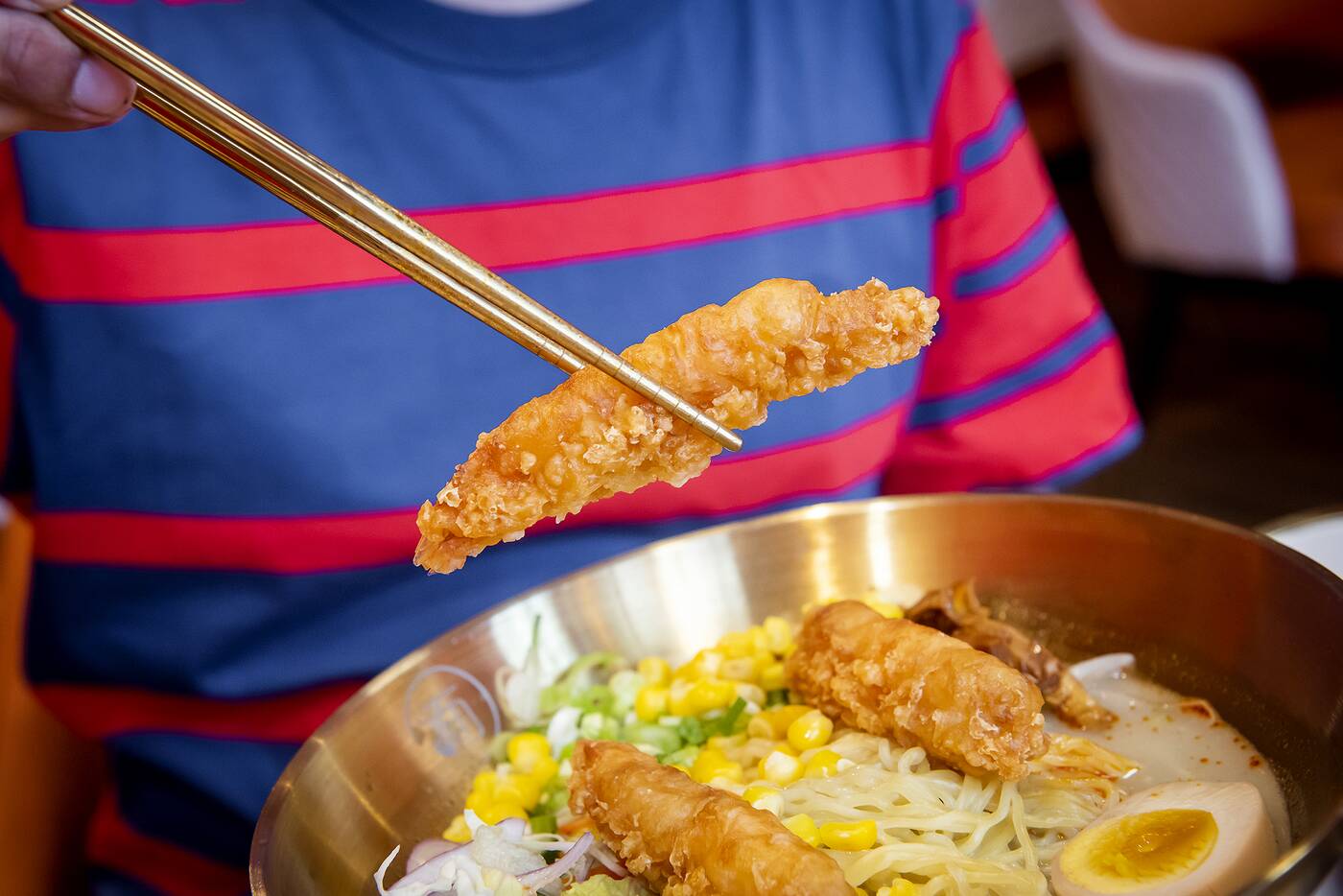 My favourite here is the Fried Shrimp Shio Ramen ($14.99), which comes with an assortment of tempura-like fried shrimp on top of a mild broth that contains lots of vegetables. This is an ideal choice for vegetarians. 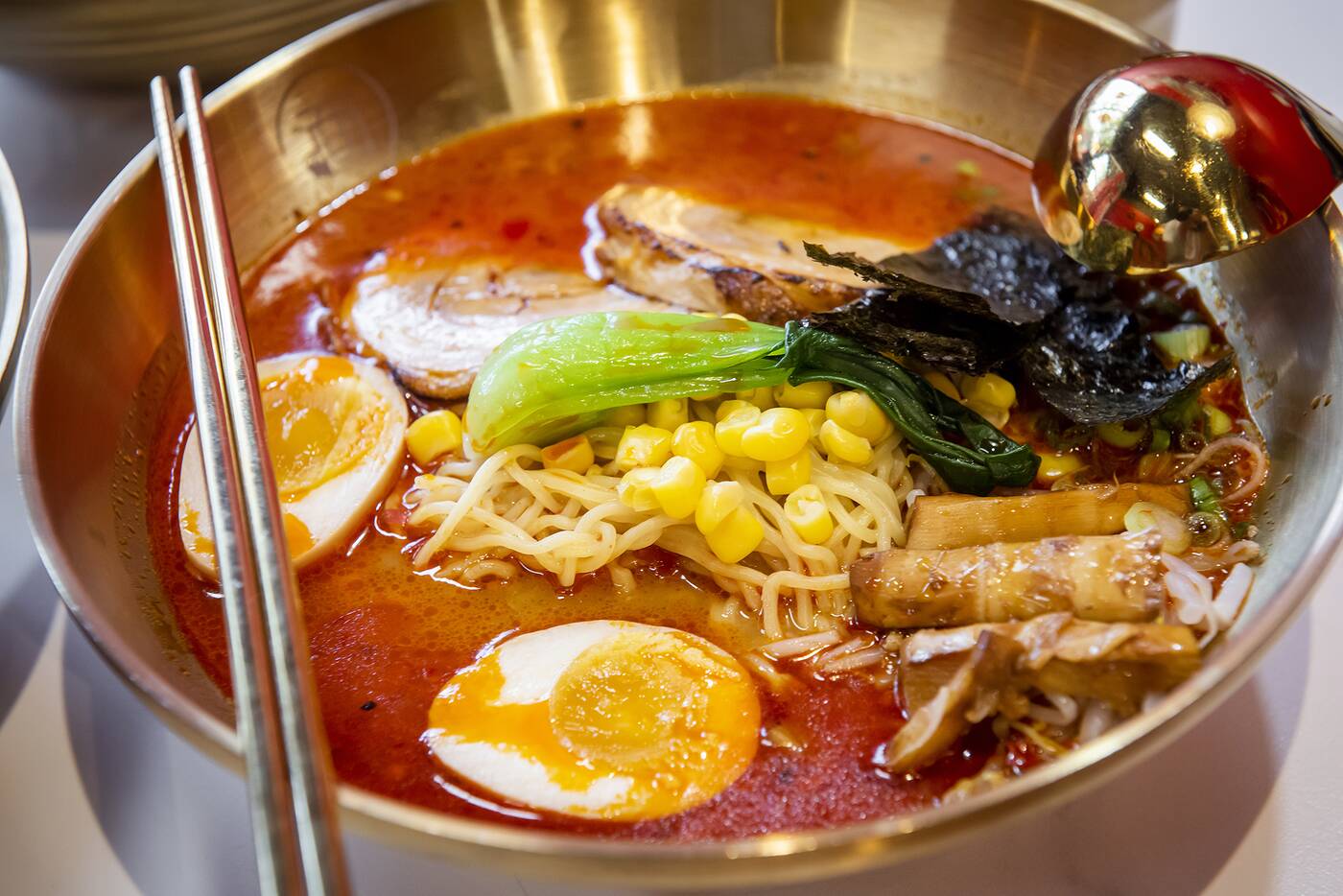 Those with a more adventurous palate should get the Spicy Tan Tan Ramen ($13.99), another popular Chinese-Japanese hybrid noodle dish that contains a rather strong peanut and sesame sauce mix in its broth.

It's also spicy, and comes with some delicious chashu meat. 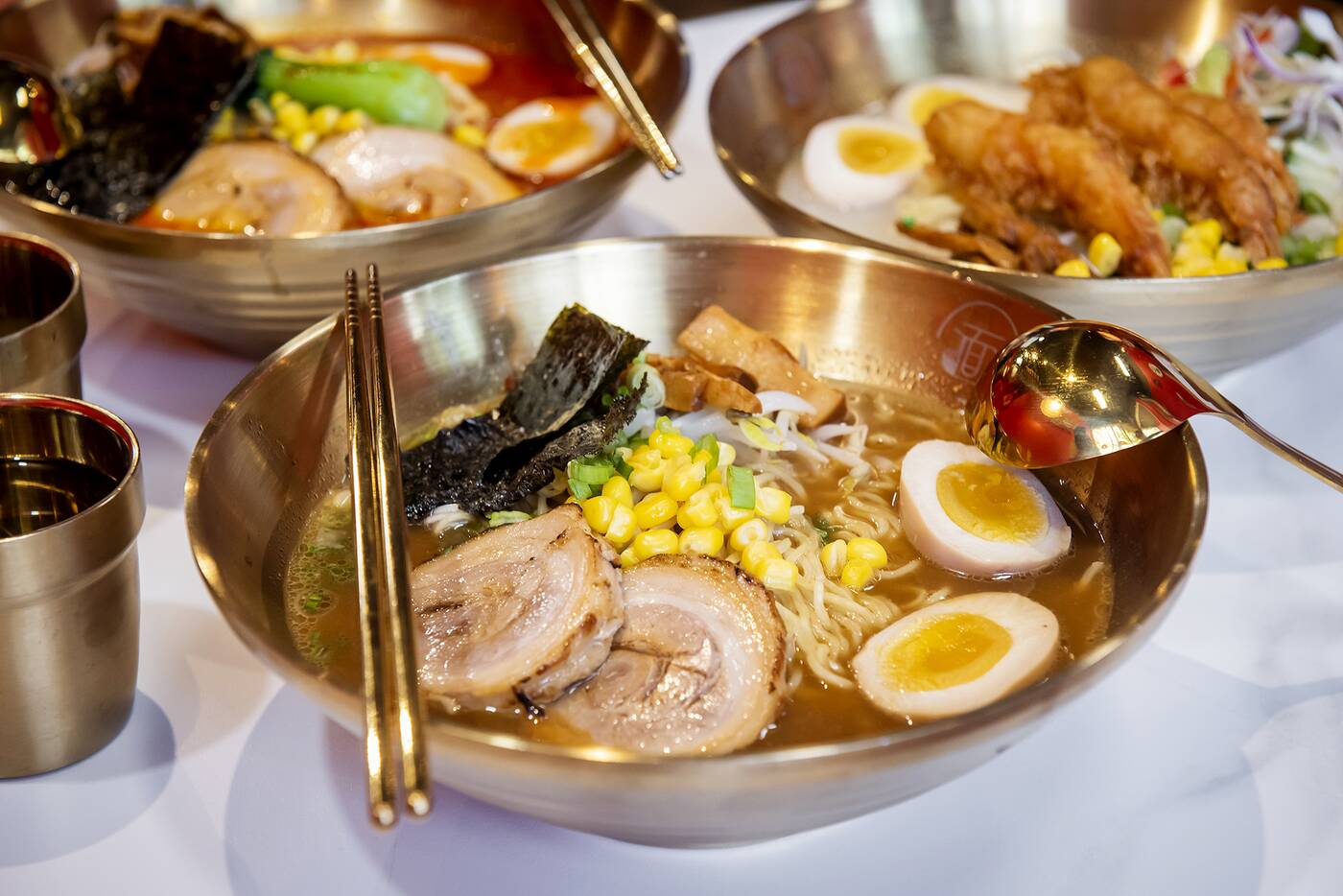 Perhaps the most classic dish is the Tonkotsu Ramen ($13.99) which features chashu, egg, stewed bamboo shoots, and bean sprouts. The tonkotsu ramen here is much lighter than those found at most other classic Japanese ramen spots, and is great for the summer months. 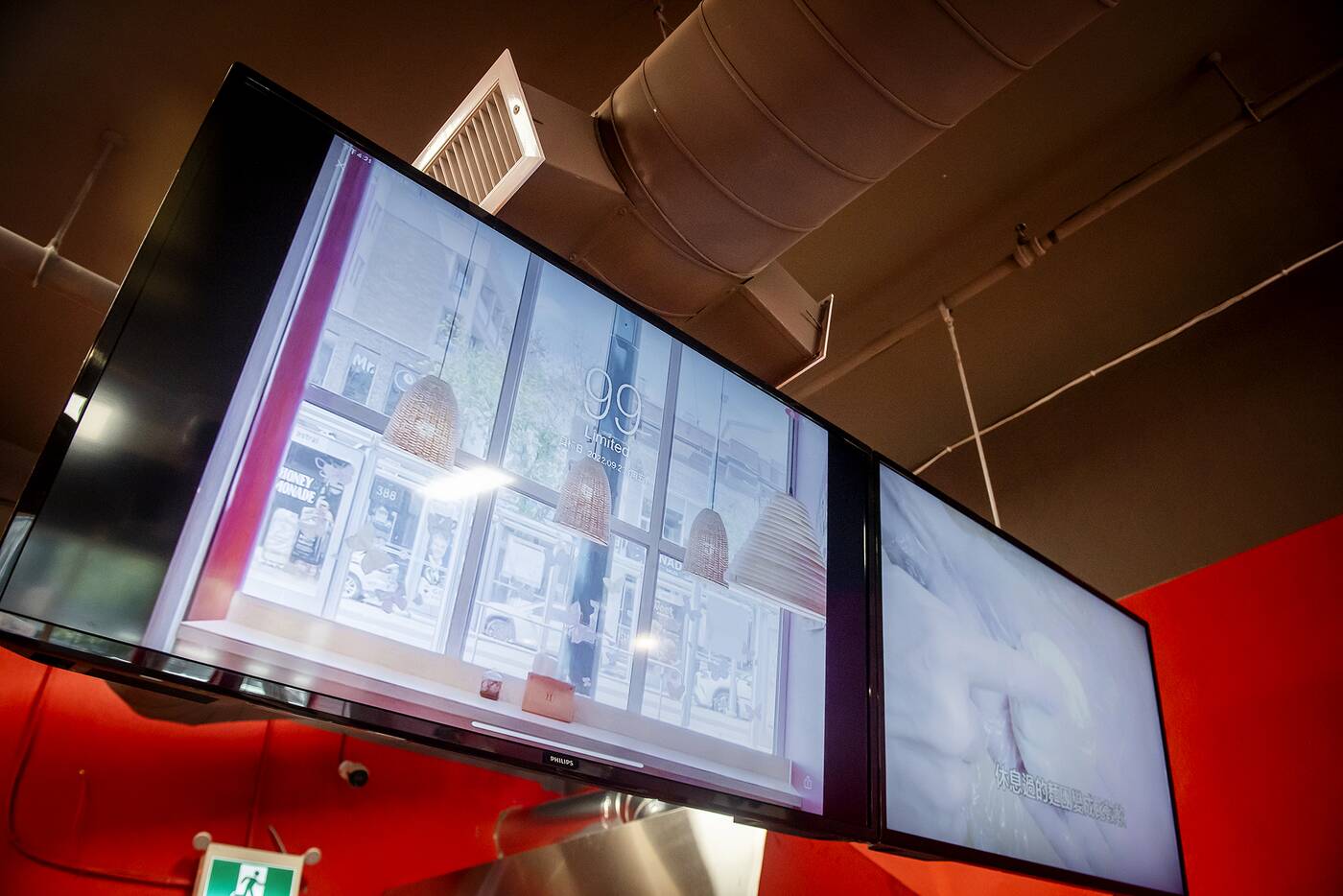 Traditionally, old-fashioned ramen restaurants in Japan only serve a limited number of noodle soups in a day.

Similarly, due to the head chef's insistence on only using pure ingredients in the soup stock, Ramen Station only provides 200 bowls of noodles per day, which you can see via a digital countdown timer. Once that's over, no more soup (noodle) for you. 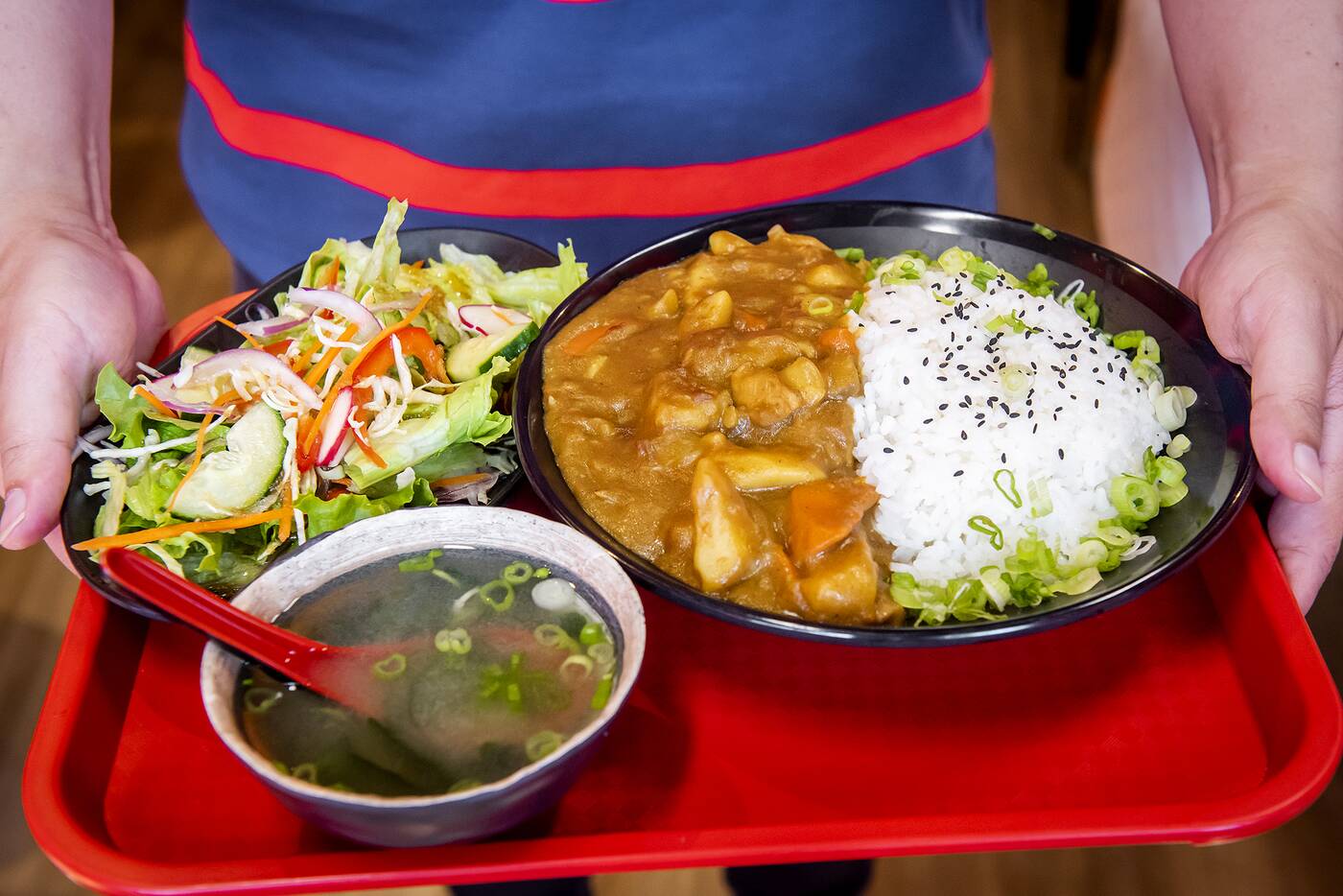 Should the unthinkable happen and you arrived too late to sample their ramen, be soothed in the knowledge that their Curry Chicken Combo ($13.99) is an excellent non-noodle option.

It comes with soup and salad, while the curry is flavourful and very classically Japanese - which is to say mild and satisfyingly thick. 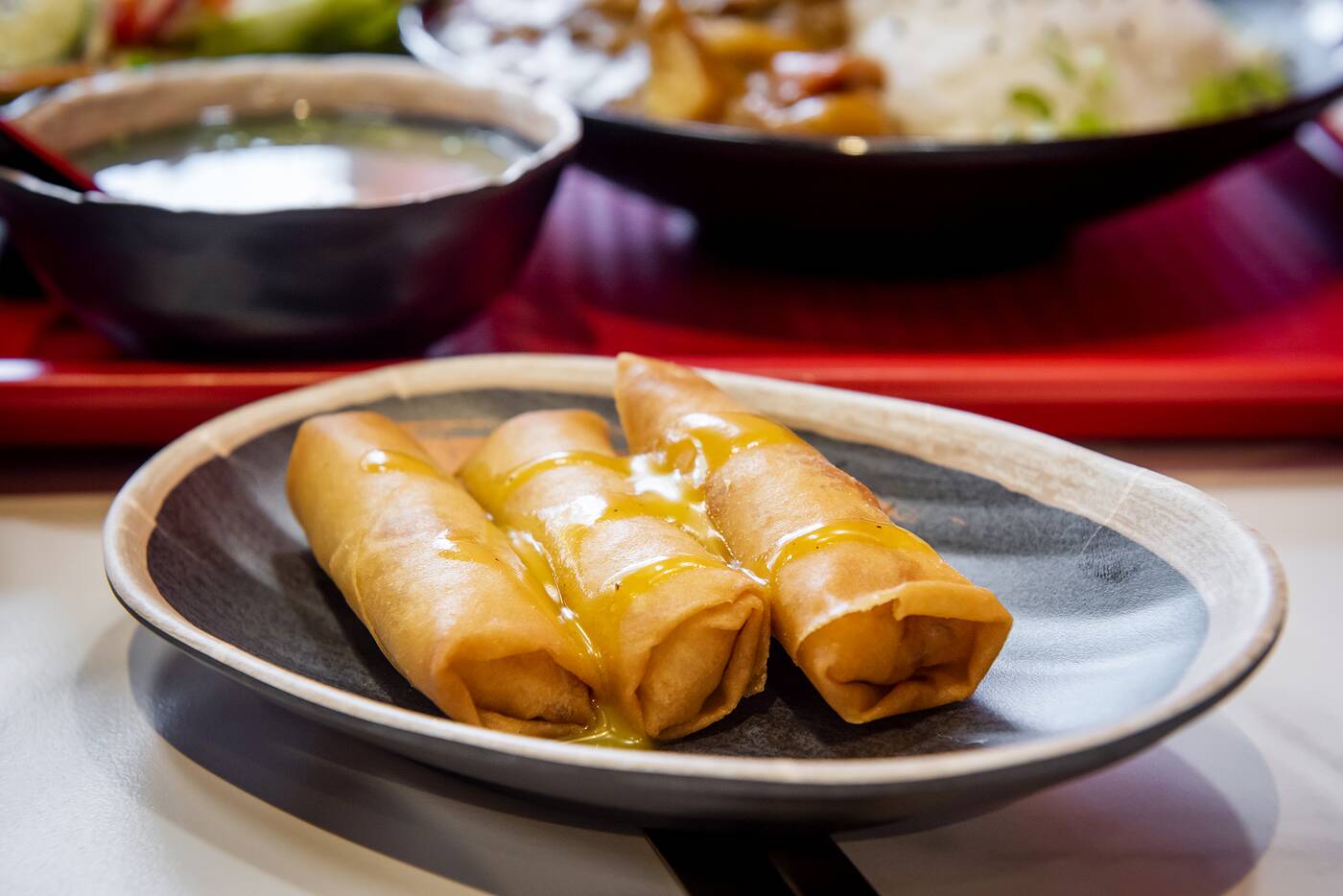 Being a Chinese-Japanese spot, it's no surprise that Ramen Station also serves crunchy Spring Rolls ($2.99 for 3 pieces) that complement any meal. 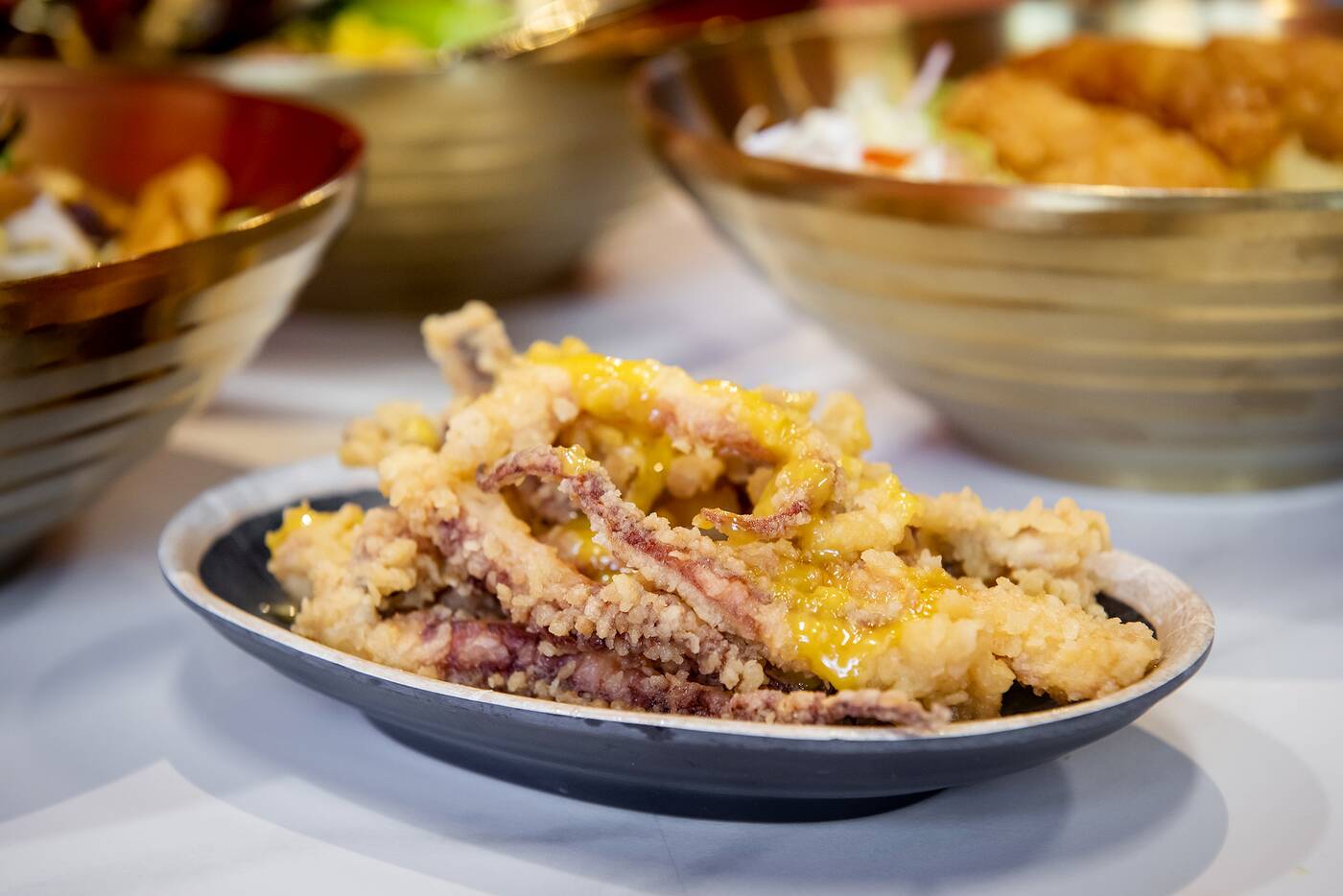 My favourite side dish is the Tokyo Calamari ($6.99) which serves up crunchy deep fried squid tentacles drizzled with a homemade sweet honey mustard sauce. 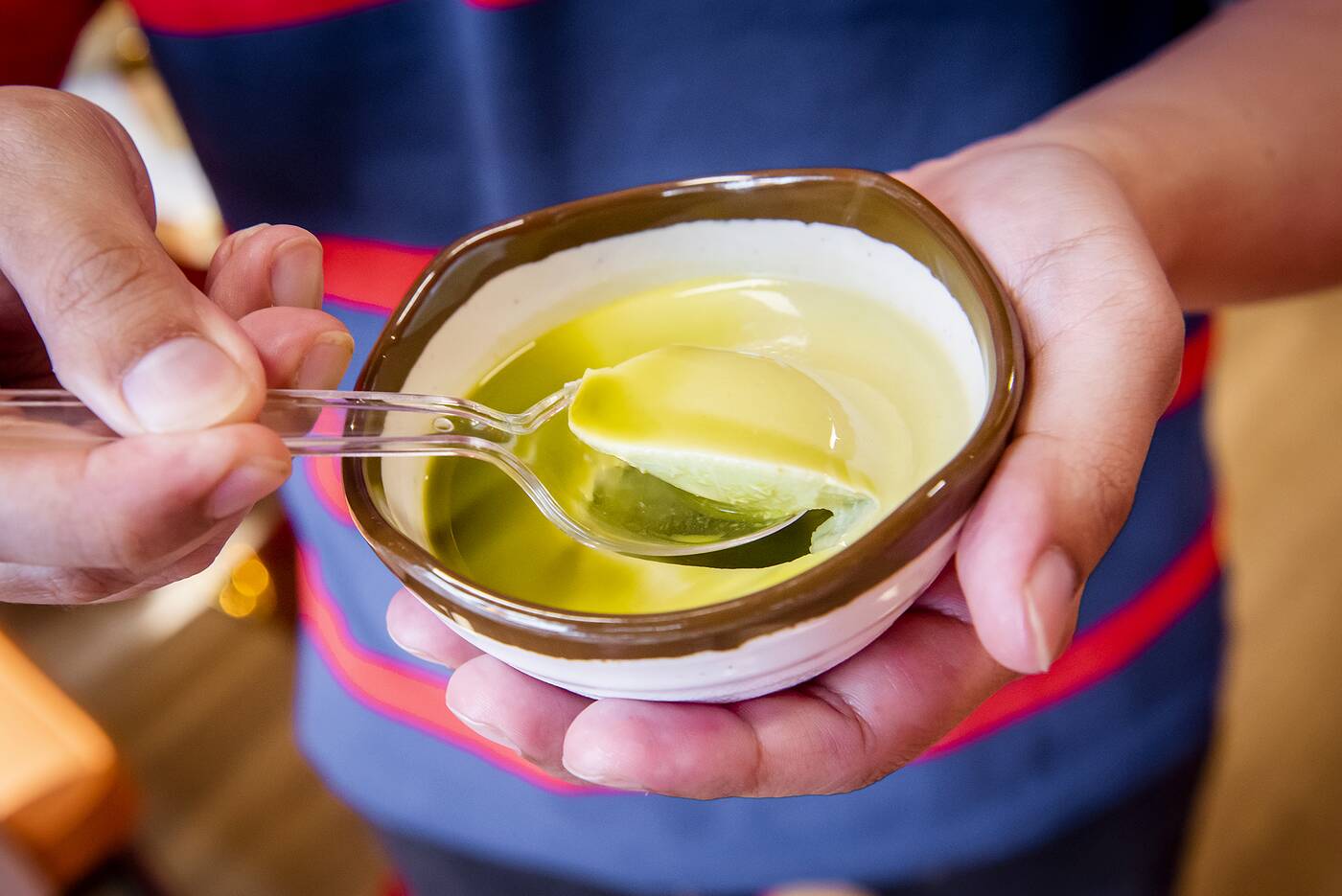 For dessert, the Hojicha Pudding ($5.50) is a must-try. It's an almond matcha tofu that is lightly sweet and creamy, nicely contrasting with the heavy main dishes. 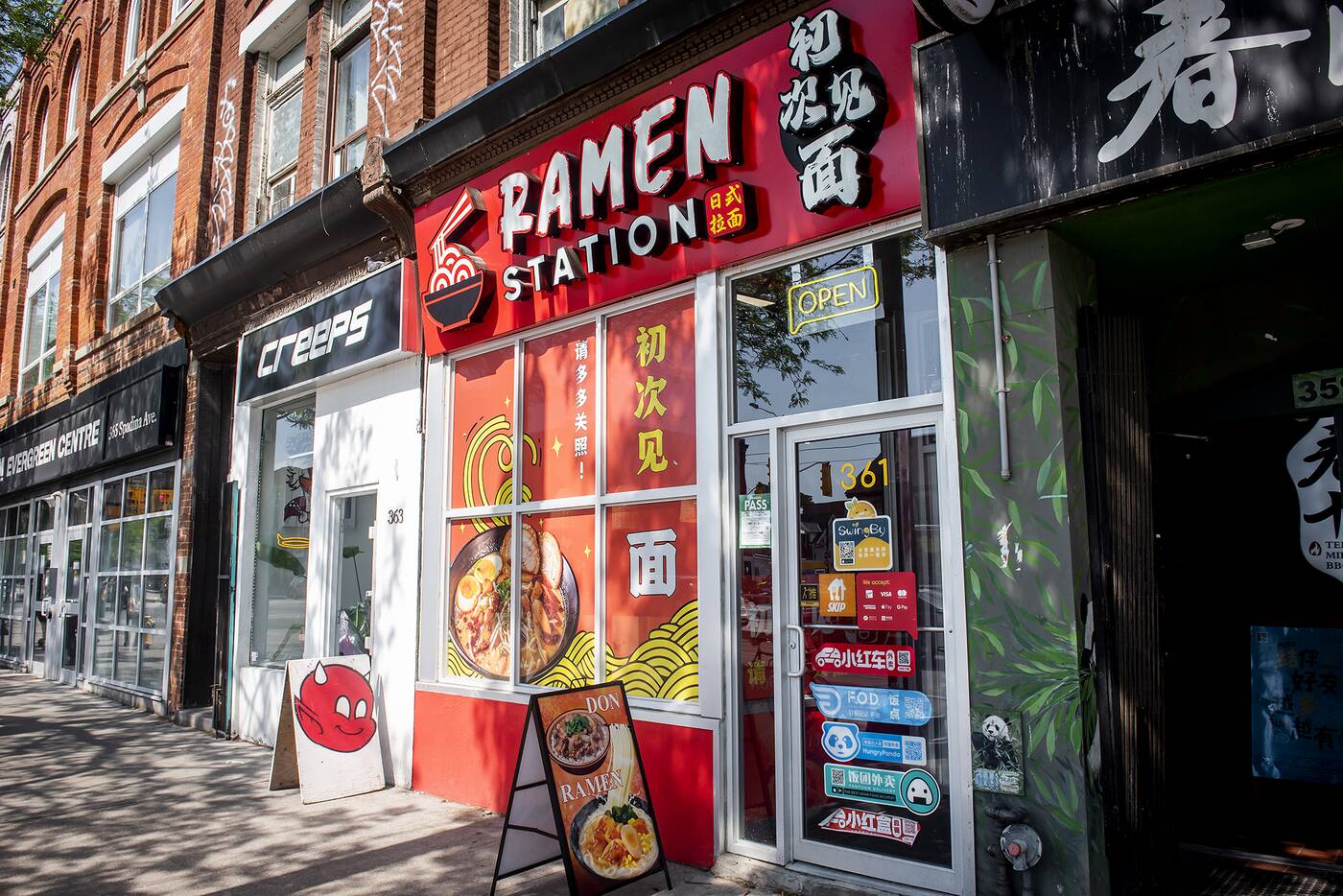