I've been waiting a long time for Poutini's House of Poutine to open. When I found out that a new poutine place was opening on West Queen West , I was on the case like cheese curds on gravy.

I followed Poutini's Twitter feed and monitored their website . I avoided eating other poutines in an effort to keep my palate fresh and my arteries open.

Like a virgin bride anticipating her wedding night, I spent weeks imaging what it was going to be like, how it would taste, and how I would feel after. For you see, like most poutine lovers, my affection borders on the fanatical, a culinary obsession so deep I easily ascribe magical powers to this simple, three ingredient dish. 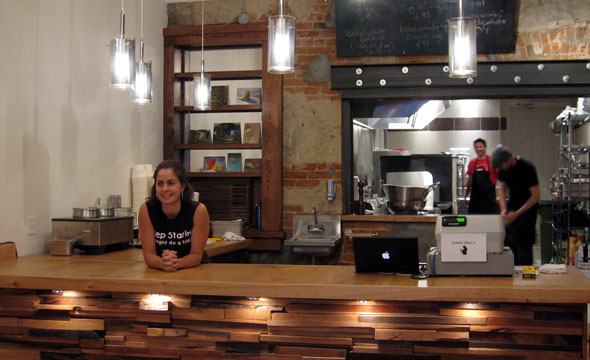 Now, there's a real risk to getting too excited about big events. As the ever quotable Oscar Wilde once said, "Niagara Falls is the bride's second great disappointment". By the time Poutini's announced their soft opening last Friday, I'd gotten myself so worked up that I worried they'd play awkward groom to my blushing bride, failing to meet my heightened expectations.

But, mon dieu! this is no ordinary poutine.

With gravy gently coaxed from roasted bones, thickened with buttery roux and evenly distributed throughout a generous pail of fresh, French-fried PEI potatoes, Poutini's main dish is a knockout.

While franchise poutines toss curds and gravy atop fries like frantic afterthoughts, Poutini's presentation is delicate, gently ensuring each squeaky curd and spoonful of gravy span the depth of the bucket, and rendering every morsel a fresh delight.

Maple Dale Cheese Farm curds provide auditory evidence that this is a serious poutine, squeakily serenading taste buds and French (Canadian)-kissing teeth before joining their brethren in a holy trinity of deliciousness. 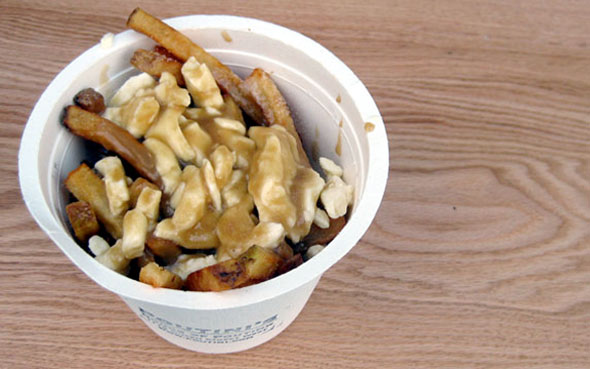 I strongly believe that poutine is the quintessential Canadian food, a flavourful link that, deftly served, can unite the solitudes of French and English Canada.

And though I admit this may be a stretch for some, Poutini's poutine is at very least a neighbourhood-builder. My friend and I sat on the bench outside--sadly Poutini's has standing-tables only--and quite literally EVERY person who passed mentioned the poutine.

Several drivers and motorcyclists stopped to ask about it, too. We met a lot of new people that night, and even though each conversation stole precious moments from me and my poutine, I appreciated the sense of communion and shared interest in a common dish.

Once I'd scraped my bowl clean, I spent a few minutes with friendly manager Katie "Squeaky" Laliberte, who explained that community building through gravy, cheese and potatoes is an intentional goal.

A family-operated business, Katie, her husband and his brother all live in the neighbourhood and agreed they would feature local artists in this gallery-turned-poutinerie.

They welcome artists to stop by and talk about displaying their work. They're also eco-conscious, scoring bonus points with me for ladling their generous portions into biodegradable containers, and serving them with compostable cutlery.

A simple menu of classic poutine, vegetarian poutine, and baked potato poutine keeps it easy for the Lalibertes to make their dishes super fresh, with curds delivered every second day and all gravy made from scratch. "Squeaky" also informed me that Poutini's delectable gravy is still in development, as the Lalibertes search for a new roux to make the thick sauce a little more transparent, and allow the roasty meat flavours greater play.

I'm not sure how they could make this heavenly dish any better, but I applaud their efforts, and look forward to a lifetime of gloriously saucy nights together. 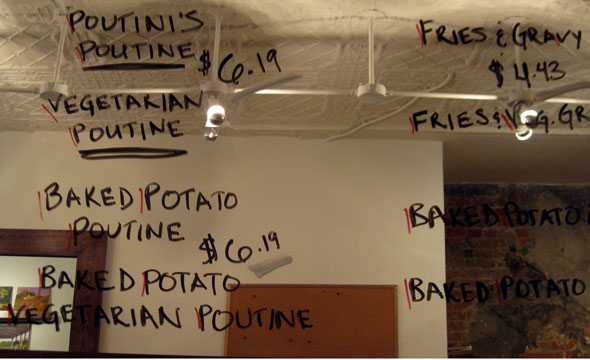