Porzia is now open in Parkdale . Well-publicized as the final entry to make Parkdale's recent moratorium cut-off , Basilio Pesce (of Biff's , Bymark , and Canoe ), is quick to point out that the paperwork for Porzia was ratified nearly a year ago, so red tape was never a real concern. In fact, the only chagrin for the chef, part owner, and undeniably engaging spokesman, was fending off impatience.

The original plan, to completely gut and redress the entire space from its bedrock, was a herculean task unto itself. Pesce bore many a "wooden cross," as he put it, to strap in piping beneath drywall, eventually outsourcing to contractors in the hope of gaining some headway. Not a Golgotha by any means, but if you factor in the extra work due to grandfathered building codes, it did seem feasible that Porzia would be destined to a state of limbo.

But good things come to those who wait. Previously a gambling den of ill repute, today, Porzia stands dashing, cheek-by-jowl in this fertile Parkdale corridor with a number of nearby heritage-meets-modern iconic spaces, such as Chantecler , Grand Electric and The Mascot , to name but a few.

While you won't necessarily feel like you're back on the continent, many of the pieces chosen for the interior by Maylor Hardware design , strive for that Old World feel. Rectangular antiqued glass with reclaimed rosette fringe, add depth to the dining room, doubling the procession of globe lights overhead. The host stand itself is a retro-futuristic installation striking for its interactive airplane gauges, phone, and Edison lightbulb. One prize piece is a true bit of Canadiana: a 1950s Canadian Pacific Railway blueprint. And along the bar, custom-made lighting made from McCarthy-era, American flashlights, is rewired to stunning (and sustainable) effect.

Sitting courtside at the chef's rail, choice seats to be sure, we asked Pesce to curate our feast, which gave us a promising glimpse of what to expect at future visits. The trim and readable menu, Ã  la CMANGO Design , features a modest selection, the pasta dishes at the midpoint acting as a meridian between light and heavy. So anything at the menu's waistline you may feel, well, at your waistline. 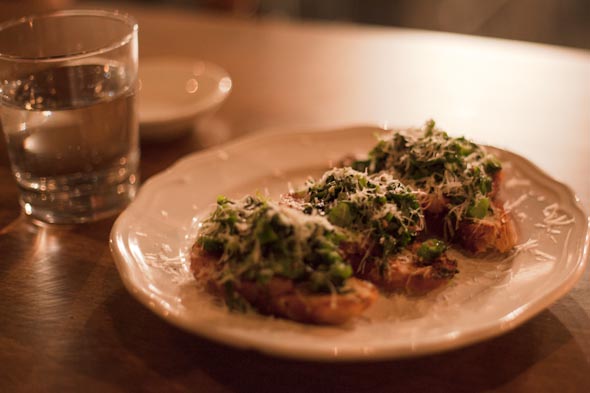 After some San Nicola (gin, pear puree, ginger) and rum old-fashioned cocktails ($12), we appetize on cotechino pork sausage and rapini crostini ($12), and warm olives and almonds ($8). 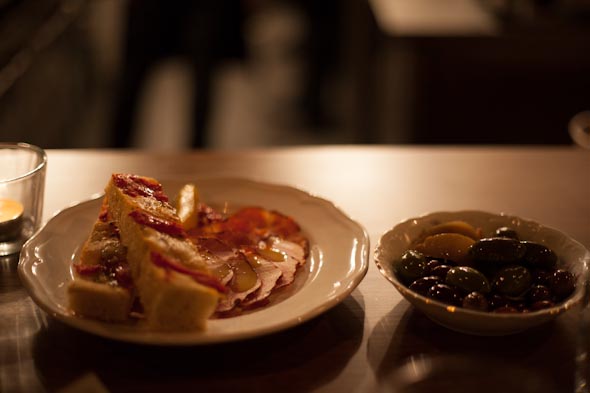 Next were bars of steaming focaccia gemmed with chunks of roasted yellow pepper, which came plated alongside an array of capicola cotta and their not-to-be-missed fiery chilli jam ($14). 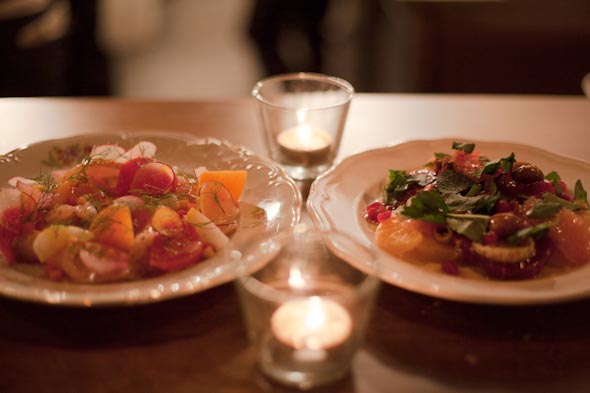 The citrus salad ($11) to follow gave any bitter notes or lingering heat a clean slate. Based on his mother's recipe, it includes wheels of blood orange, grapefruit, clementine, and is adorned with parsley, mint, cracked olives.

Similarly, the hamachi crudo ($16), was refreshing, the subtle taste of the delicate sashimi cuts, never overpowered by the brighter tang of pickled radish or semi-sweet saffron. Add a drizzle of olive oil, a light dusting of wispy fennel leaves, and the dish was a golden recharge. 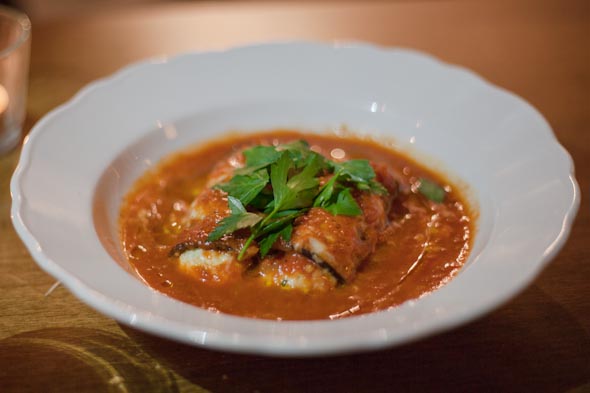 From thereon in, we hit our stride with richer textures and flavours, imbibing on glasses of Ripasso ($10), and dabbling in an involtini of eggplant wrapped around ricotta and roasted garlic ($14). 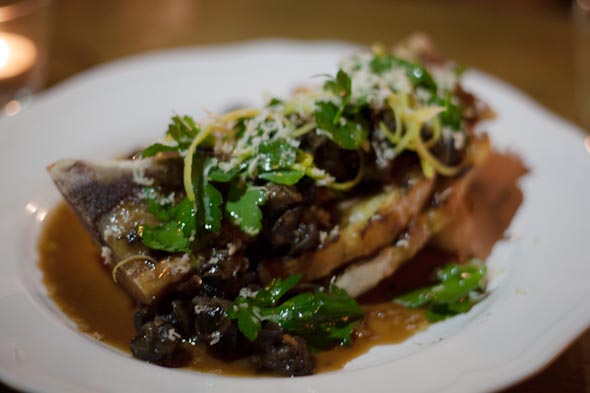 We then slathered creamy Beef shinbone marrow, doused in a lovely snail and gremolata ragout, onto crostini ($17). 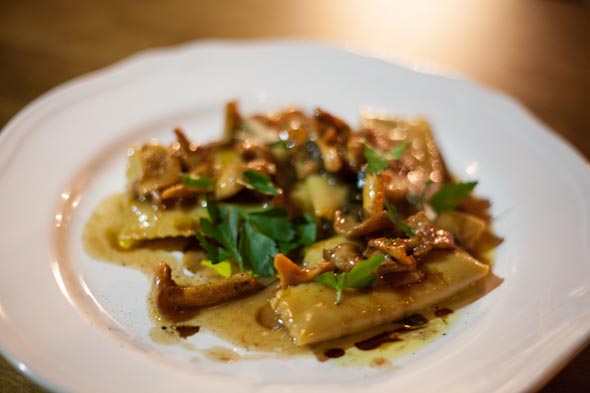 Beforehand we were unsure whether the filling in the chicken liver agnolotti ($16) would perhaps be too coarse, too pungent, too close in texture to the enfolding pockets. But plated in a pork-stock reduction, with seasonal hedgehog mushrooms, parsley, and a light wick of fifteen-year-old balsamic that would serve just as fine on vanilla bean ice cream, it ended up being a menu favourite. 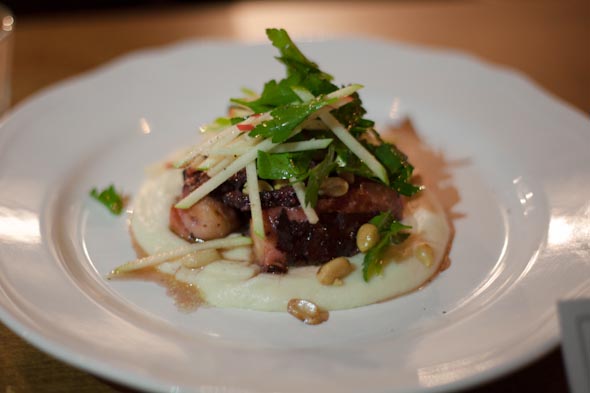 If somehow you feel your meal at Porzia is too provincial, I can't recommend enough the grilled octopus, set on a bed of pureed semolina, and strewn over with shards of granny smith, gala apples, and peanuts ($20). According to Bas, reactions to this dish ranged from hesitant to going straight "over their heads." Without a doubt, claptrap, I say.

Sweeping up the meaty bites in the semolina mixture, the inclusion of apple and peanut, while admittedly an unlikely garnish, never interrupted the substantial texture of the octopus. On the contrary, they gave a nice, light reprieve in between bites of the richer seafood nubs. Simply outstanding. 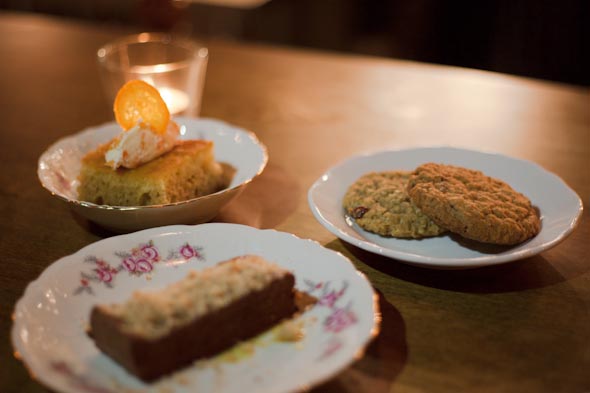 Of the three desserts available, the semolina cake with ricotta, candied orange halo, whipped cream, and espresso pour-over ($8) was the most noteworthy, while the chocolate hazelnut mousse ($8) will certainly satisfy most. Cookies seemed an odd inclusion, mulled cranberry or oatmeal chocolate chip offered that night, but as Pesce defended, for the dessert noncommittal, it's small enough to warrant an indulgence. Plus, as he says, "it's fun to experiment and taste the new batches daily."

Seasonal rotations aside, expect Porzia's menu to evolve, week to week. Chances are, if the kitchen doesn't get bored, you won't either. Longevity is what Pesce is after, and why building memories around food and eating is the restaurant's basis for setting its roots in the Parkdale community. 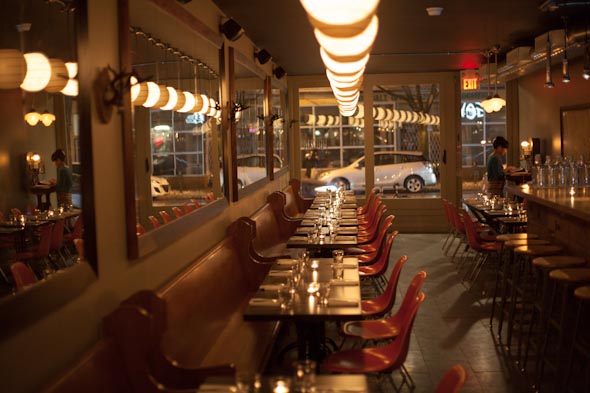 I imagine that the real-life Porzia, the chef's mother, and an inspiration for many of the recipes, gives her blessing. At least since she has been in as many times as number of weeks Porzia has been open. And with the current versatility and superb batch of flavours coming out of the kitchen, not to mention in-house salumi plans in the works, I expect it's already well on its way to becoming a regular neighbourhood fixture.