After too much green beer on Saturday, a hearty breakfast was called for. I met up with a couple friends and headed over to Poor John's Cafe at 1610 Queen Street West. Poor John's has been open for just over a year now, and it's been getting quite a bit of positive exposure lately. Literary clubs like the T-DOT Writer's Meetup Group and the Wilde Chats Philosophy Cafe go there regularly, finding the quaint spot ideal for discussions and readings.

We didn't go to read or talk about books, though. We went for breakfast. We arrived at 2pm and were lucky enough to get the last available table, conveniently for three. The bubbly waitress was there in a jiffy (really- I think she skipped over, she was so enthusiastic) to take our orders. 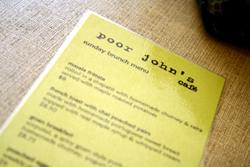 I decided to go traditional with two eggs over easy (not green), bacon, marble rye toast, and the maple home fries. My dining partner was looking for some lighter fare, and ordered a whole wheat bagel with cream cheese. The menu didn't seem to have too much to choose from, but it might have been just a brunch menu.

The food arrived a while later, after just enough time for a morning-after-party conversation. The eggs were perfect, the toast was pretty with its swirls, the bacon was nice and lean- spread evenly over the potatoes... presumably to hide them. I think I got the last spuds in the batch, because unfortunately, they were tough and dry. Not too maple-y either, sadly. The free trade coffee was good, hot and strong, though, so that made up for it.

The place was filled with Formica tables and vinyl bound chairs, and the sun was shining in the big bay window, which warmed me up along with the coffee. A soothing moss green paint coated parts of the exposed brick interior, and a retro refrigerator and rustic green waiting station rounded out the stylish yet cozy atmosphere.

In my world of breakfast reviews, I rate with a scale from one to five. So, for Poor John's, I'll give the service a definite 5 (the server was exorbitantly nice). The food was a 4 (not too much selection, and the potatoes were limp). The atmosphere a 5 (I can see myself going there to read in the sunshine). Cleanliness a 5 (which is good). Cost a 4.5 (my eggs were $6.75). Overall, Poor John's Cafe gets a 23.5 out of 25. I'll definitely be going back again. 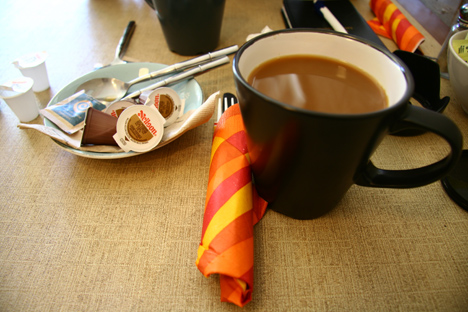