Orote is serving up a five-course prix fixe menu of reinvented Korean dishes that heavily count on the local ingredients in season.

Hidden away on the Bloor side street of Havelock, the tax office-turned modern restaurant is just off from Koreatown in the same way the set menu is related to but slightly diverging from traditional Korean food. 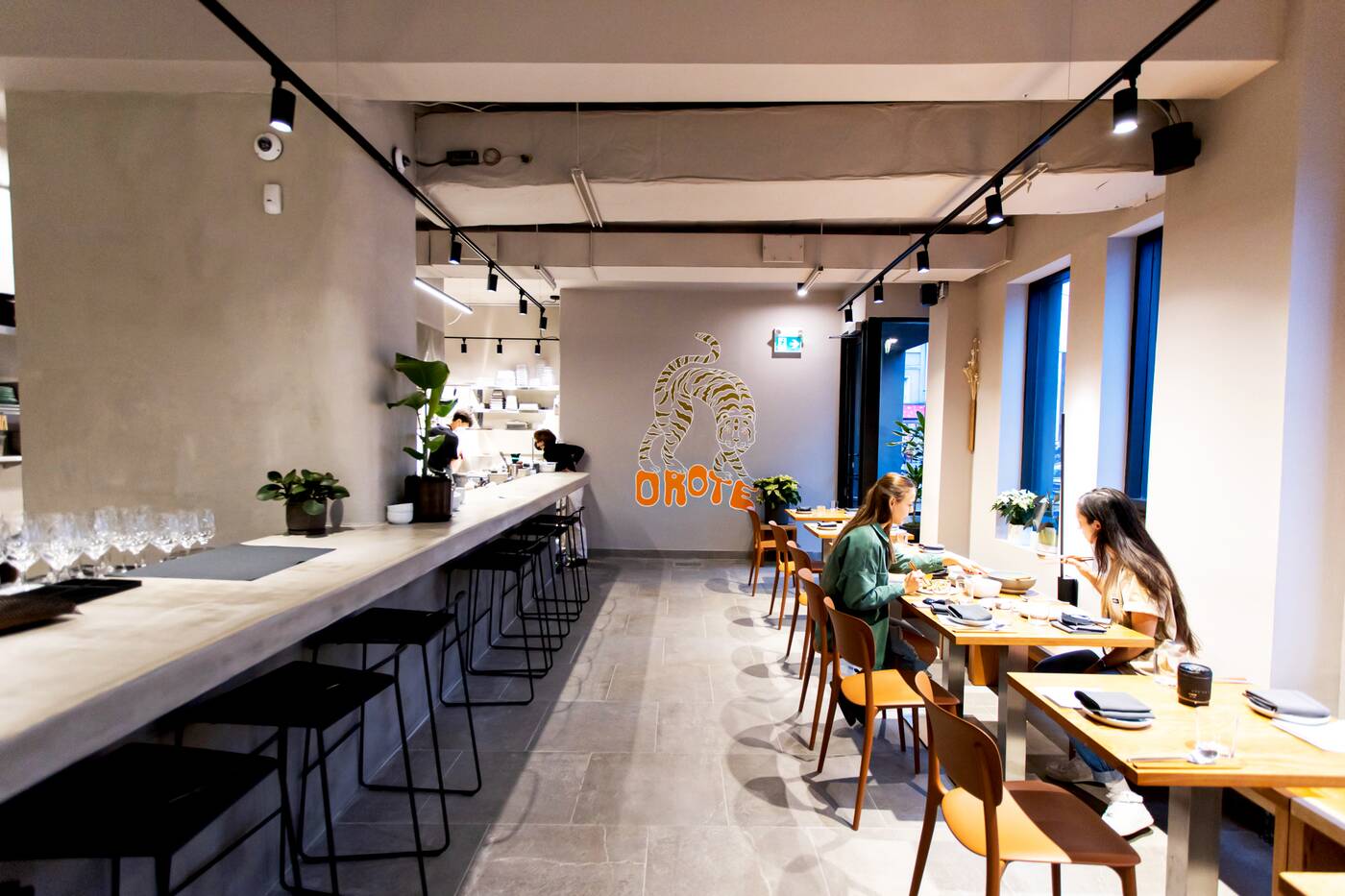 The mascot horangi on the back wall was handpainted by Toronto mural artist Madison van Rijn and chef Kwangtaek Lee whips up his creations in an open kitchen right behind the farthest half of the bar. 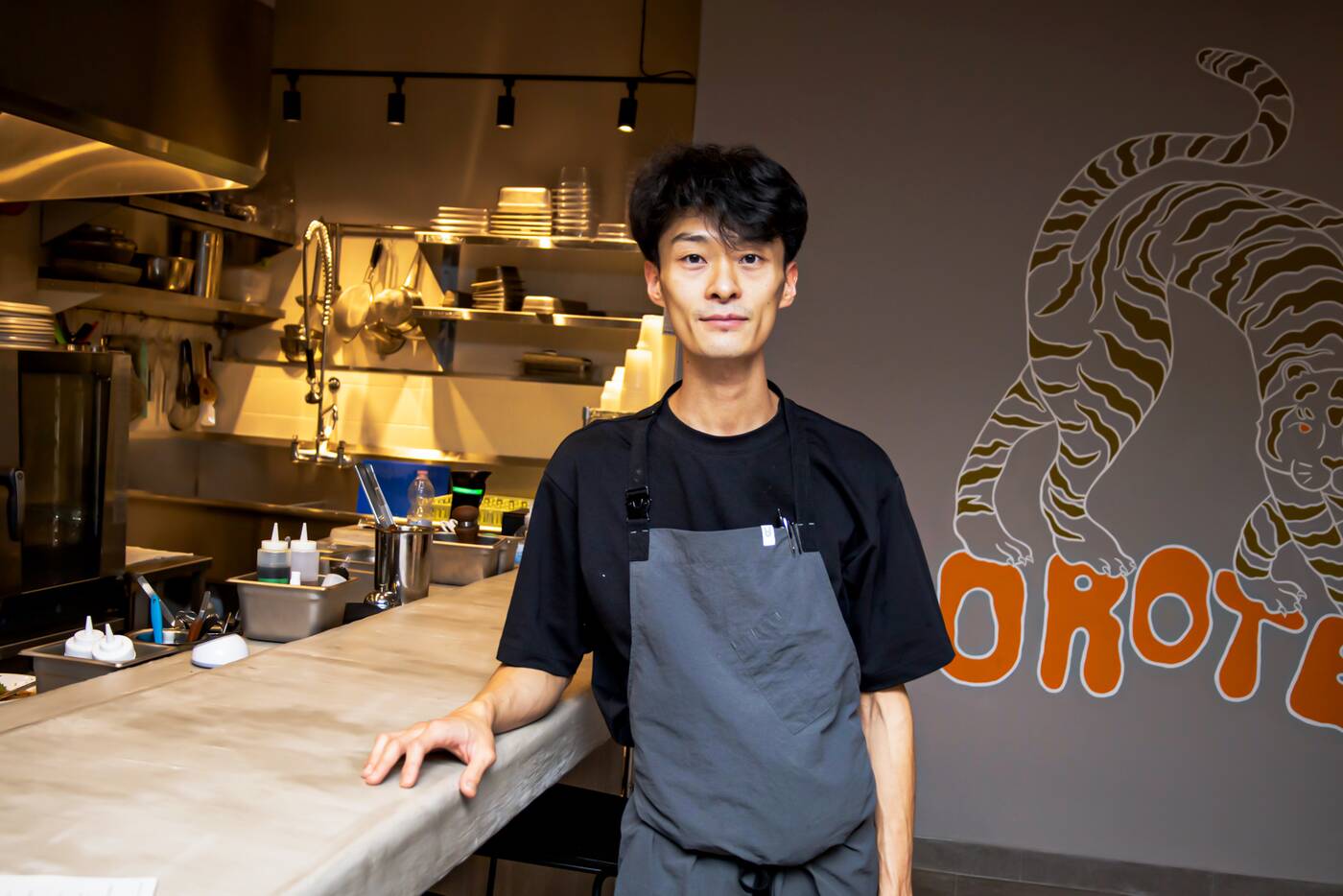 Chef Kwang was inspired by his four years working under Actinolite owner and chef Justin Cournoyer, who continually emphasized the importance of reconnecting with your cultural roots and using fresh ingredients, to open his own restaurant. 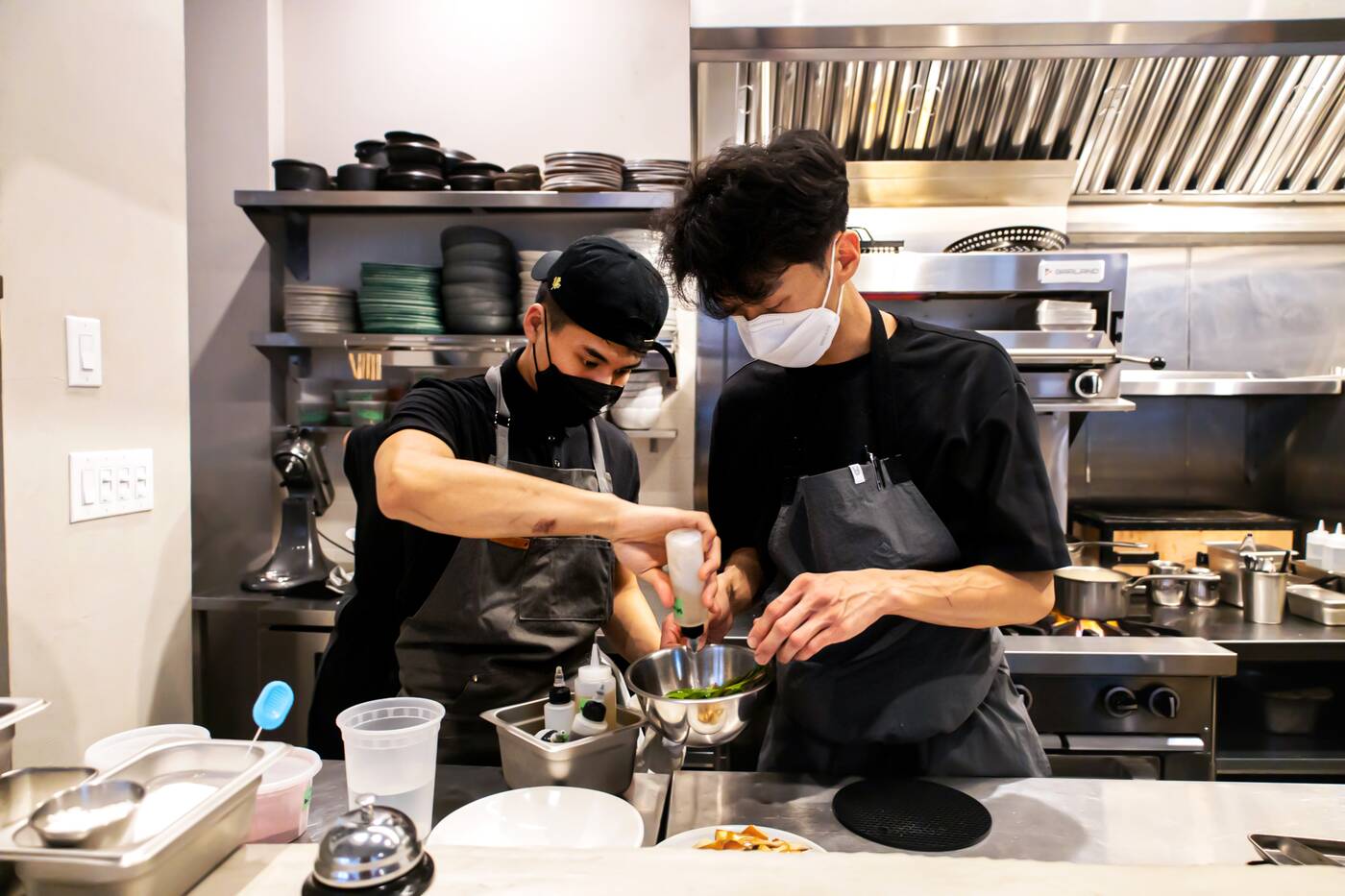 Here, he uses everything he learned about working with local and seasonal ingredients plus his familiarity with Korean flavours to create a fully curated dinner experience. 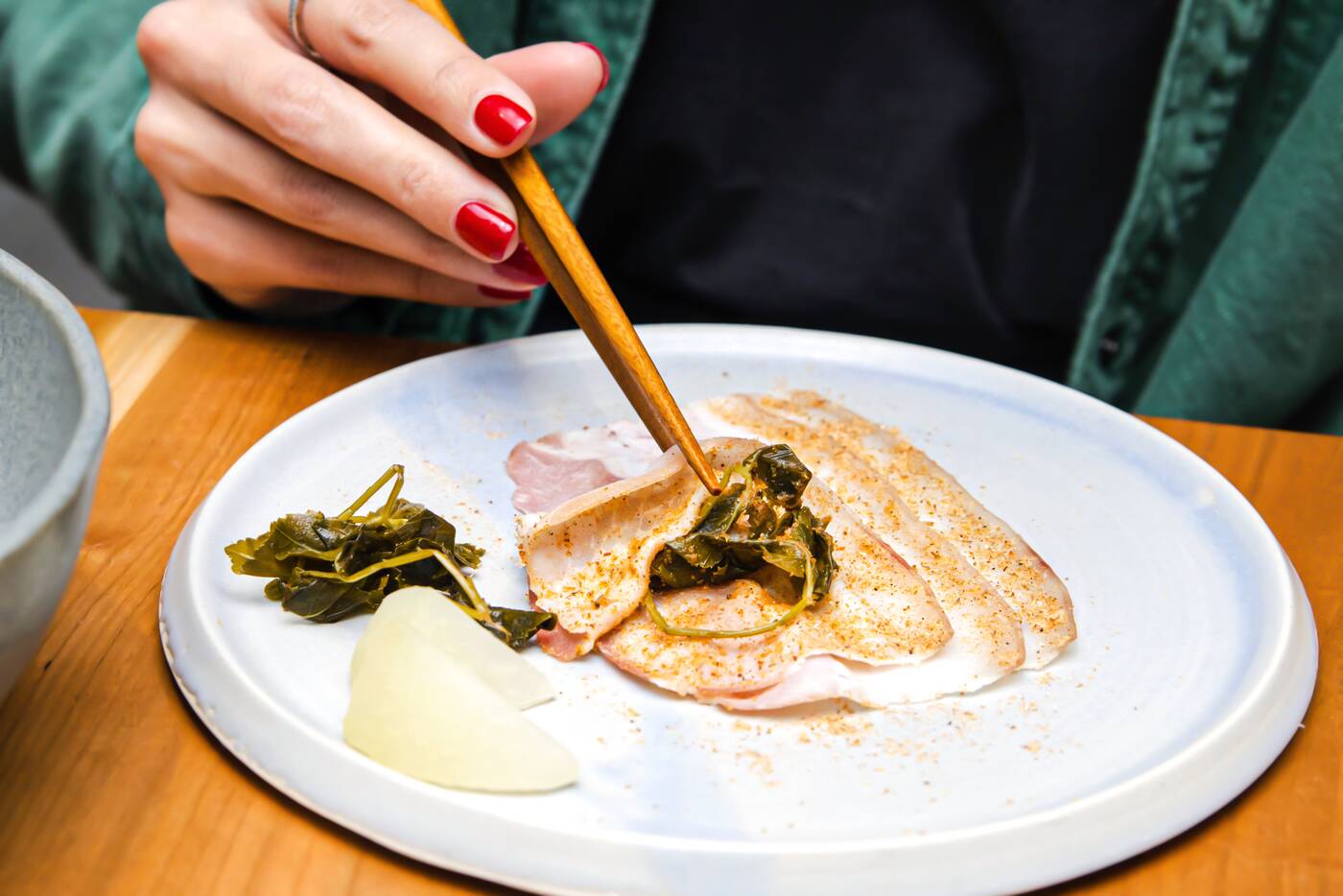 First up on the $78 prix fixe menu is paper-thin pork ham, carefully cooked in a pressure cooker and dusted with shrimp powder. Wrap some of the pickled Korean herbs on the side in the pork belly and finish it off with a bite of kohlrabi. 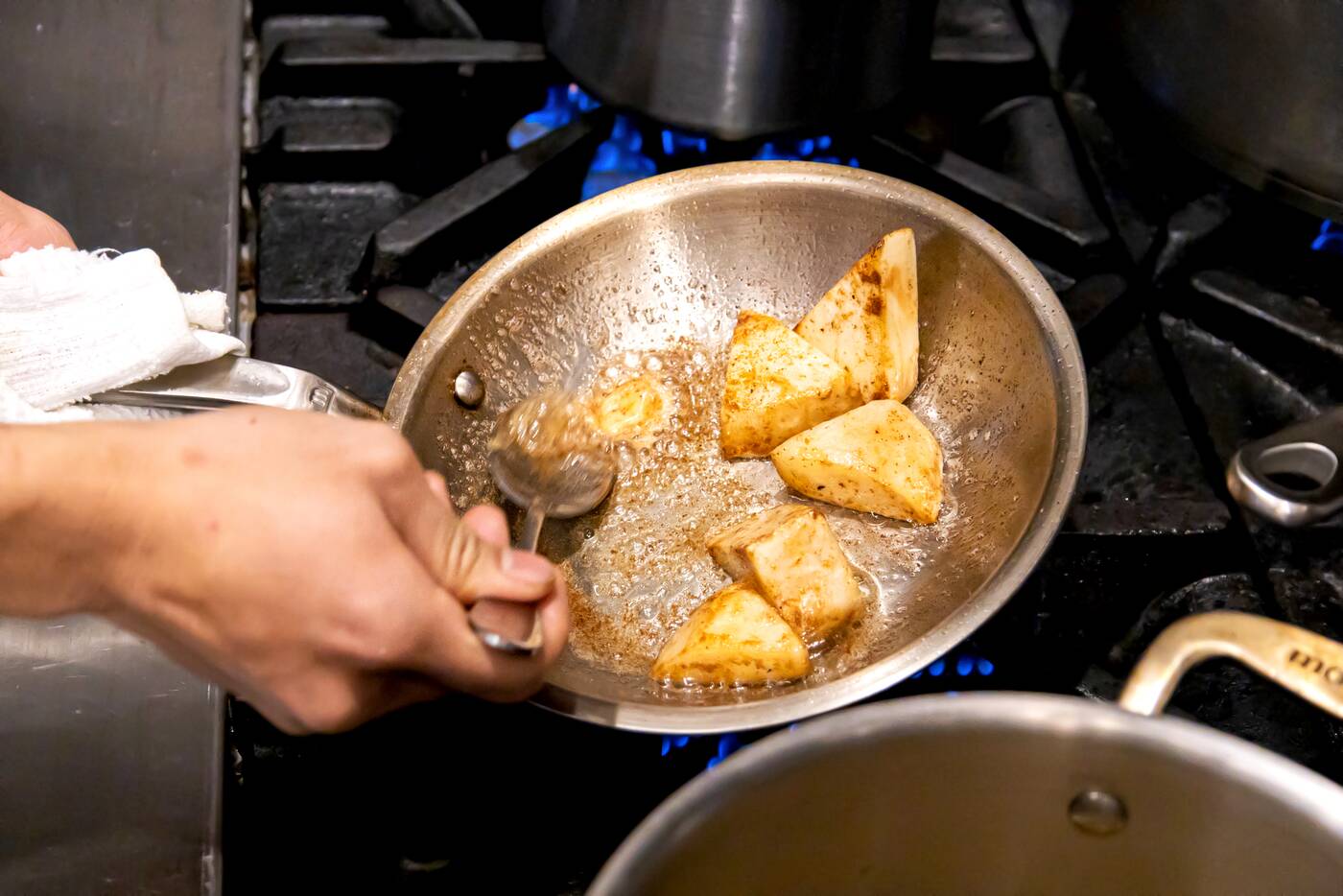 Each of the courses comes with a choice of two dishes, so you can follow the pork ham with either potato and squid or celeriac and pear roasted with fermented porcini mushrooms and miso butter. 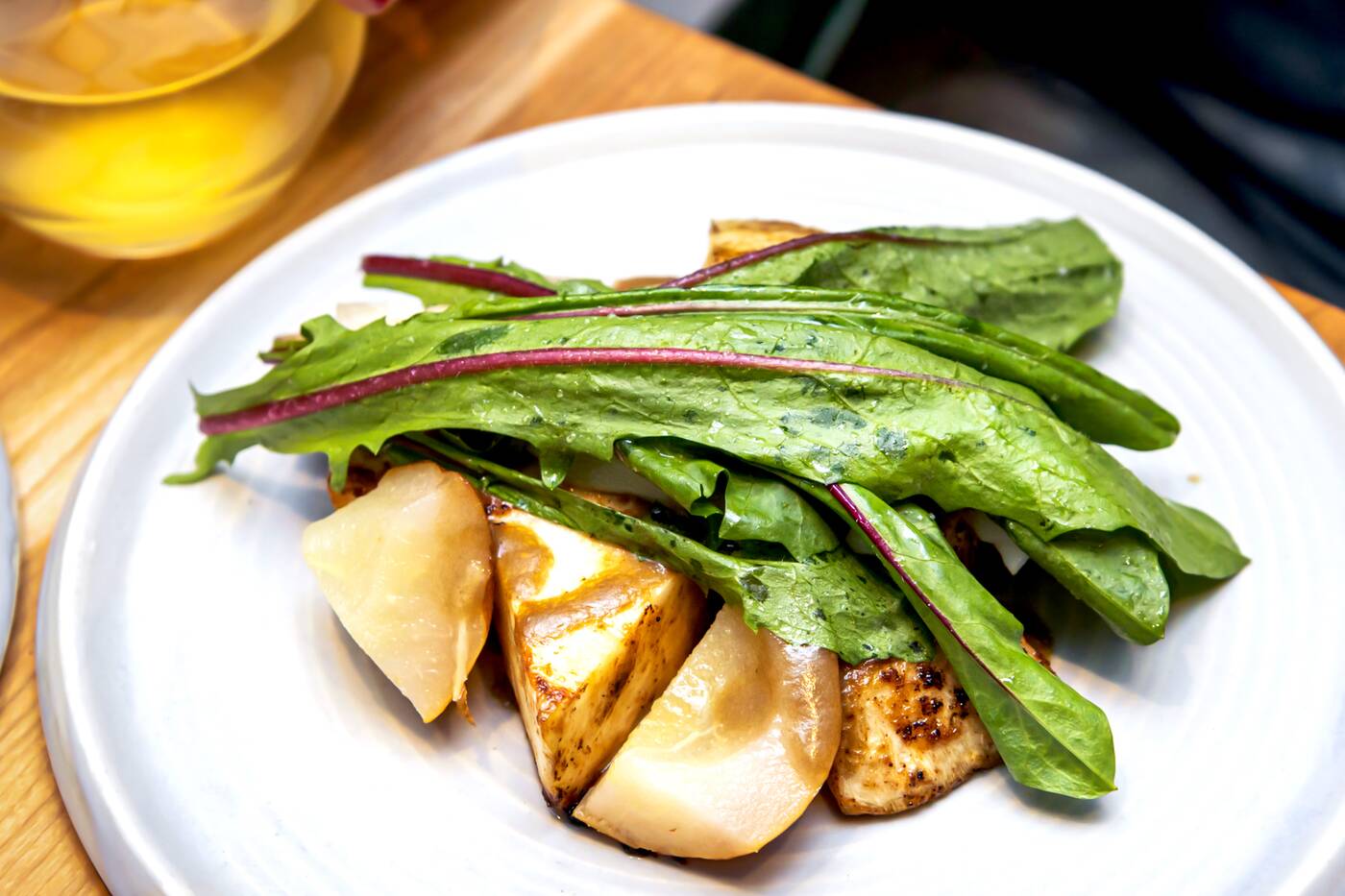 Fresh dandelion greens are laid over the celery root and pears for a salad of several different textures and tastes. 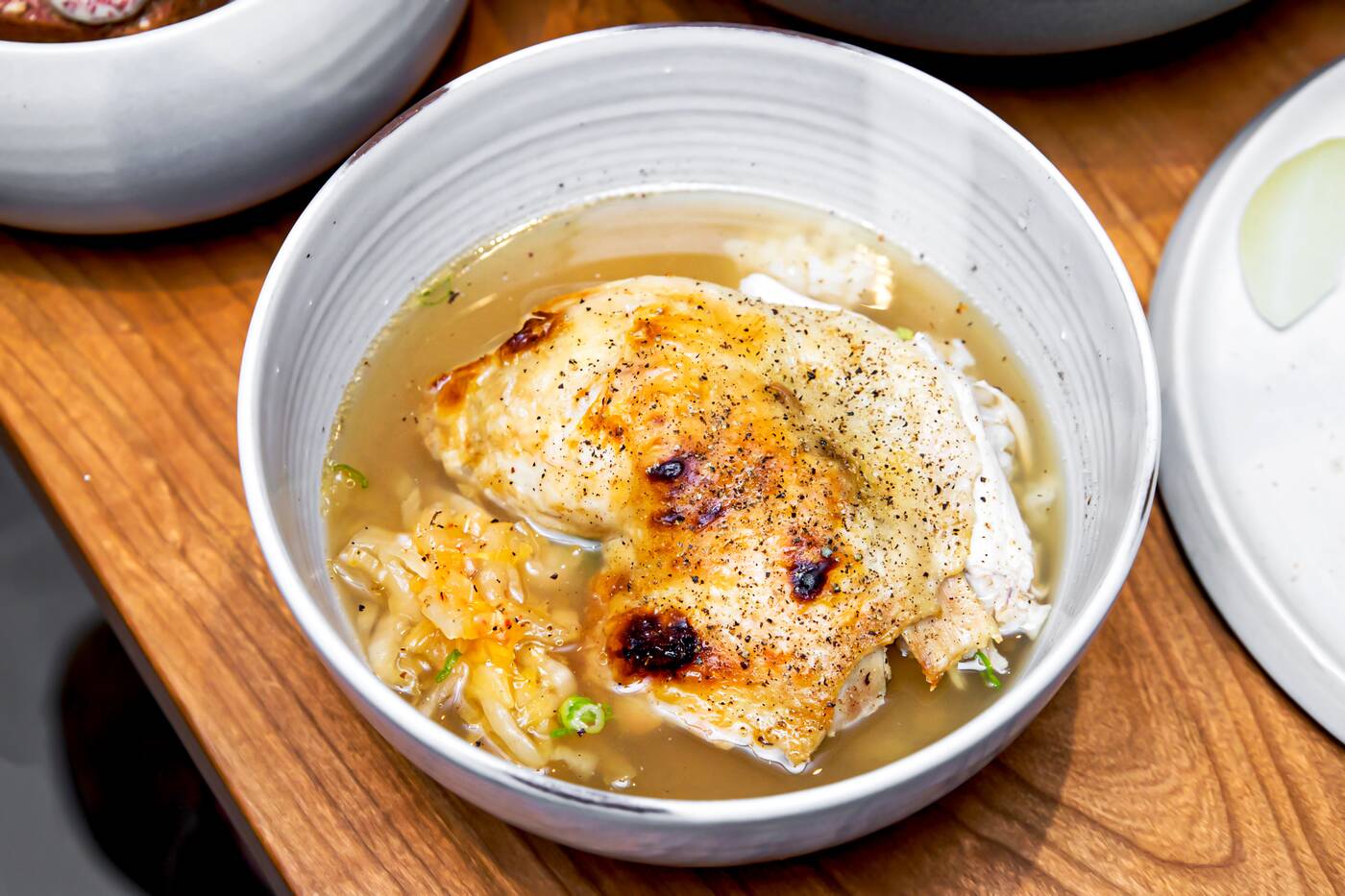 You have the choice of a rice cake or a steaming bowl of comfort, a.k.a chicken soup, for your third course. Chicken and rice add heartiness to a bowl of broth made even more flavourful by anchovies and green onion. 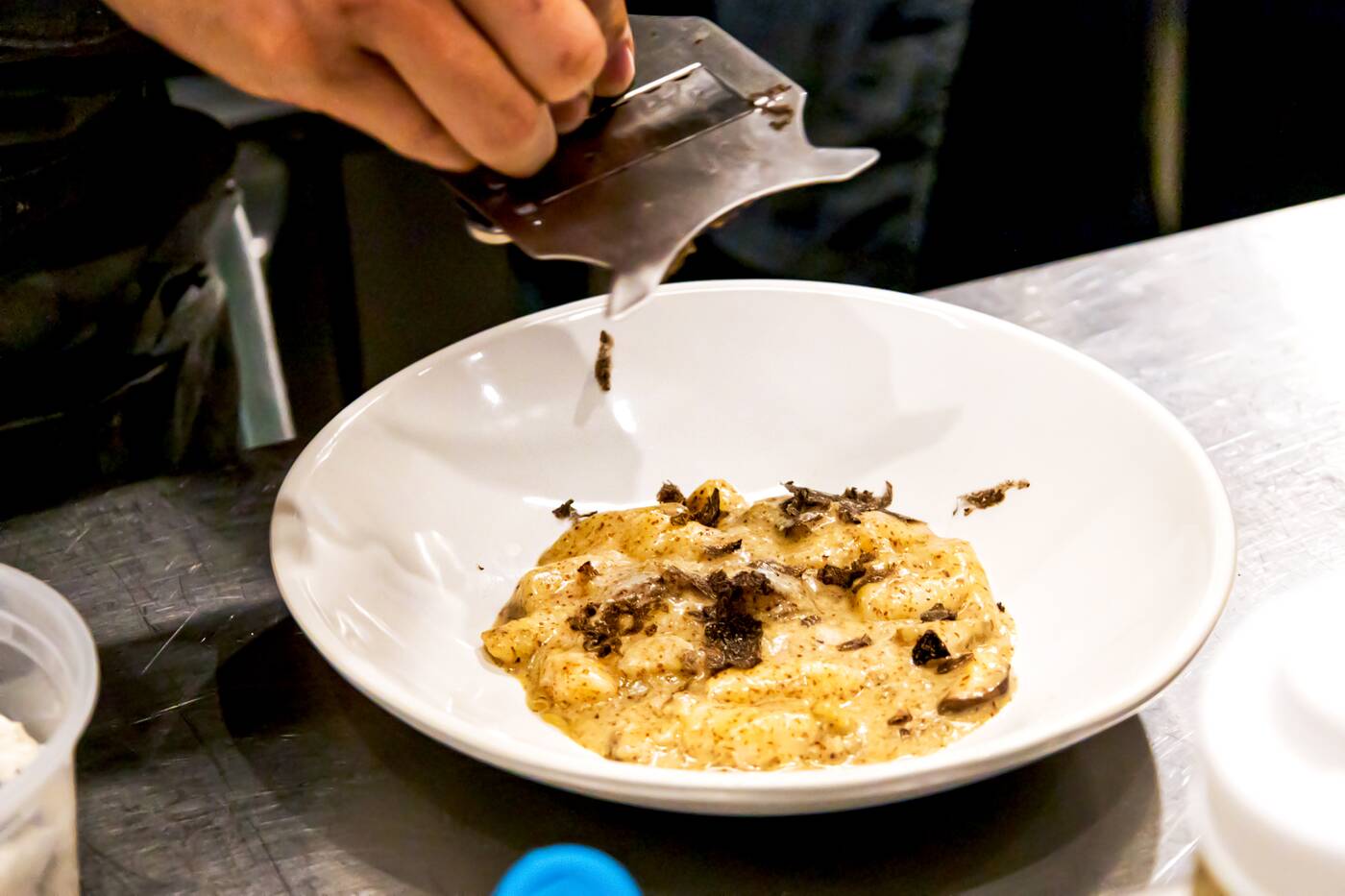 Chef Kwang came up with the alternative to chicken soup as a way to present a traditional Korean rice cake in a fresh way. It's prepared with a sauce from perilla seed and gobo, a popular root vegetable in Korea and Japan. You can also add truffle for $8. 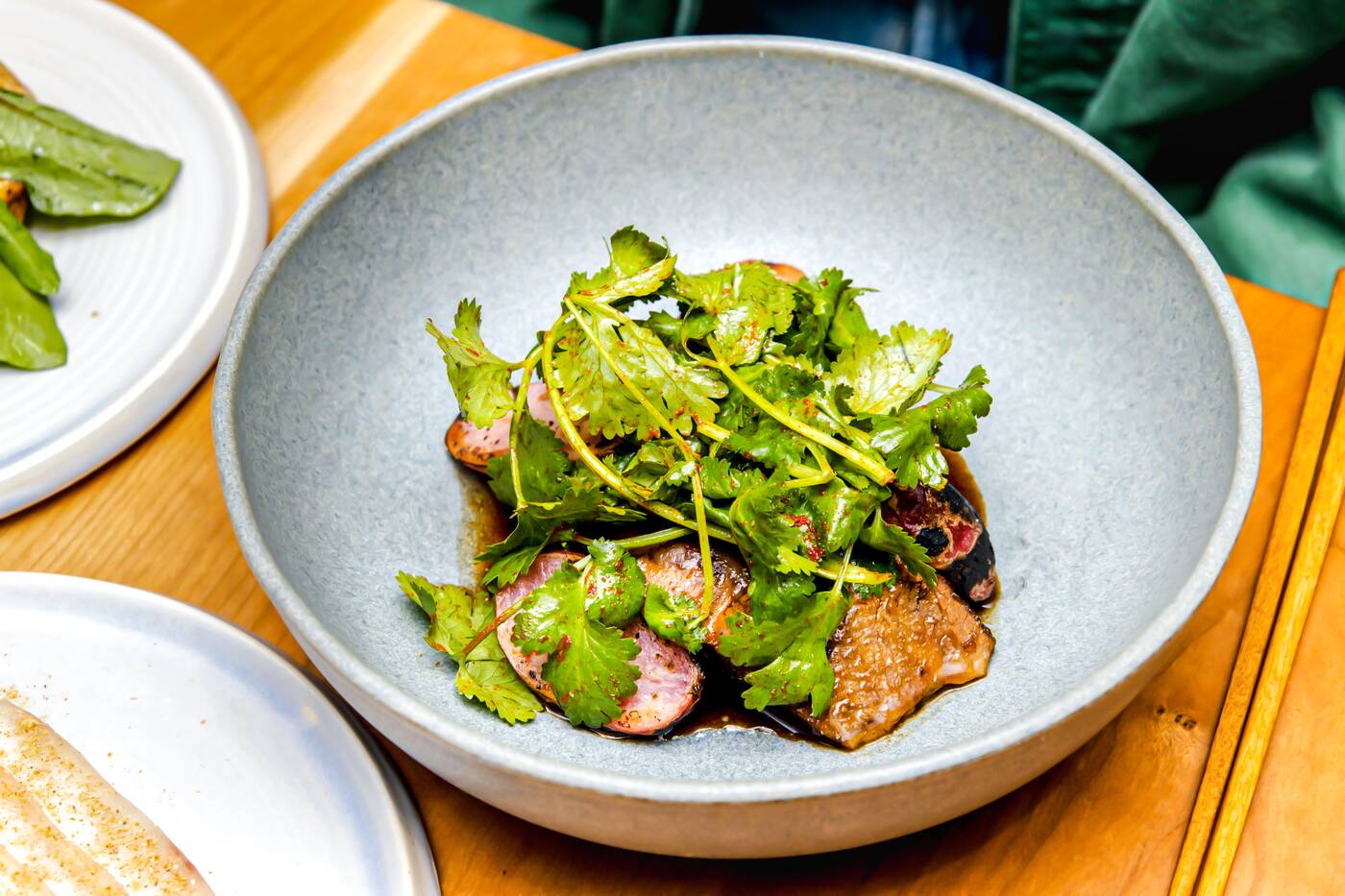 We finish things off with kalbi short ribs combined with potatoes, a Canadian classic, both marinated in coriander. Leaves of cilantro cover the tender meat. 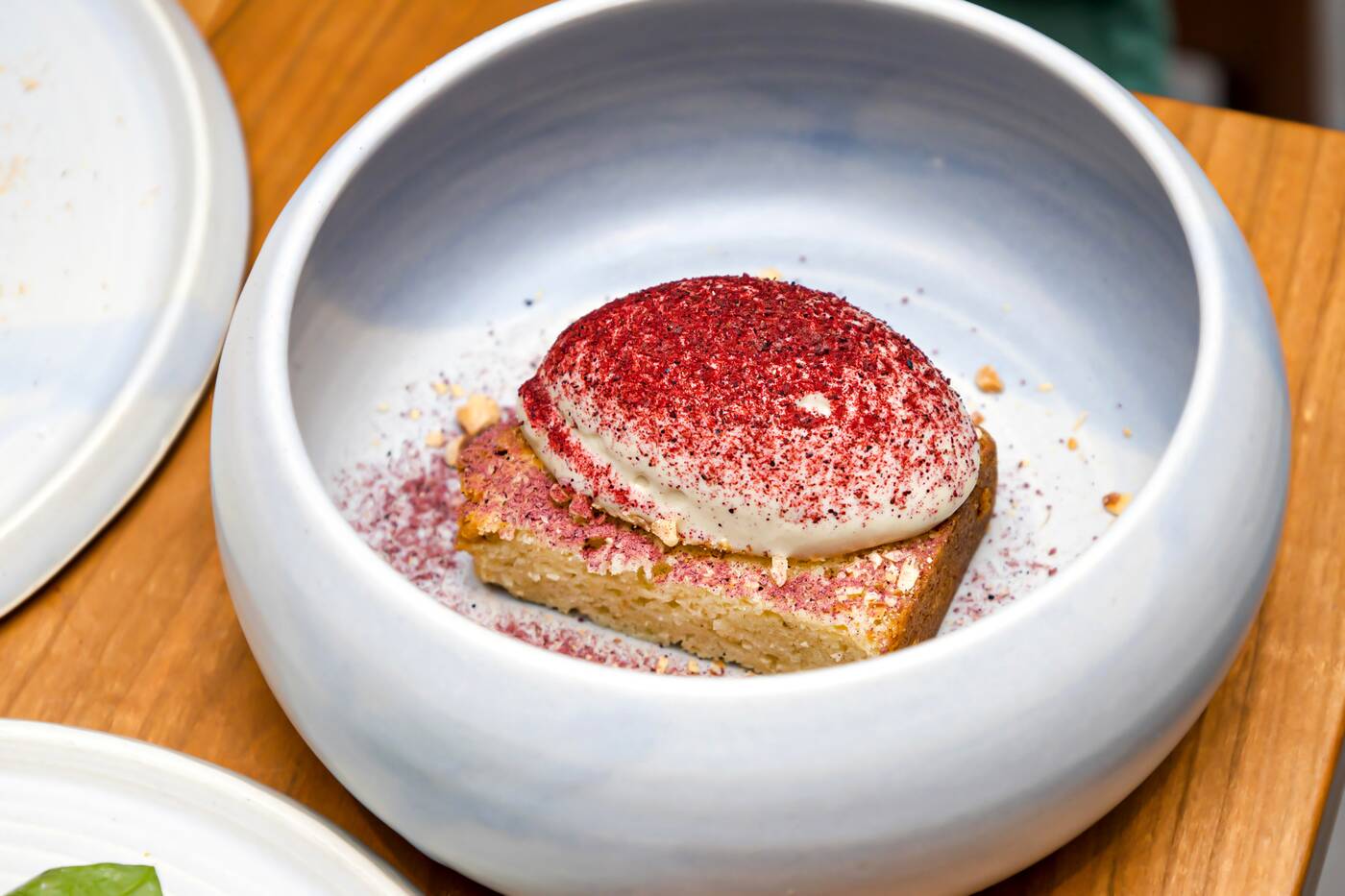 Brown butter cake topped with sweet potato ice cream and a generous dusting of blackcurrant powder is for dessert. Even those at the table without a sweet tooth will enjoy the subtle sweetness. 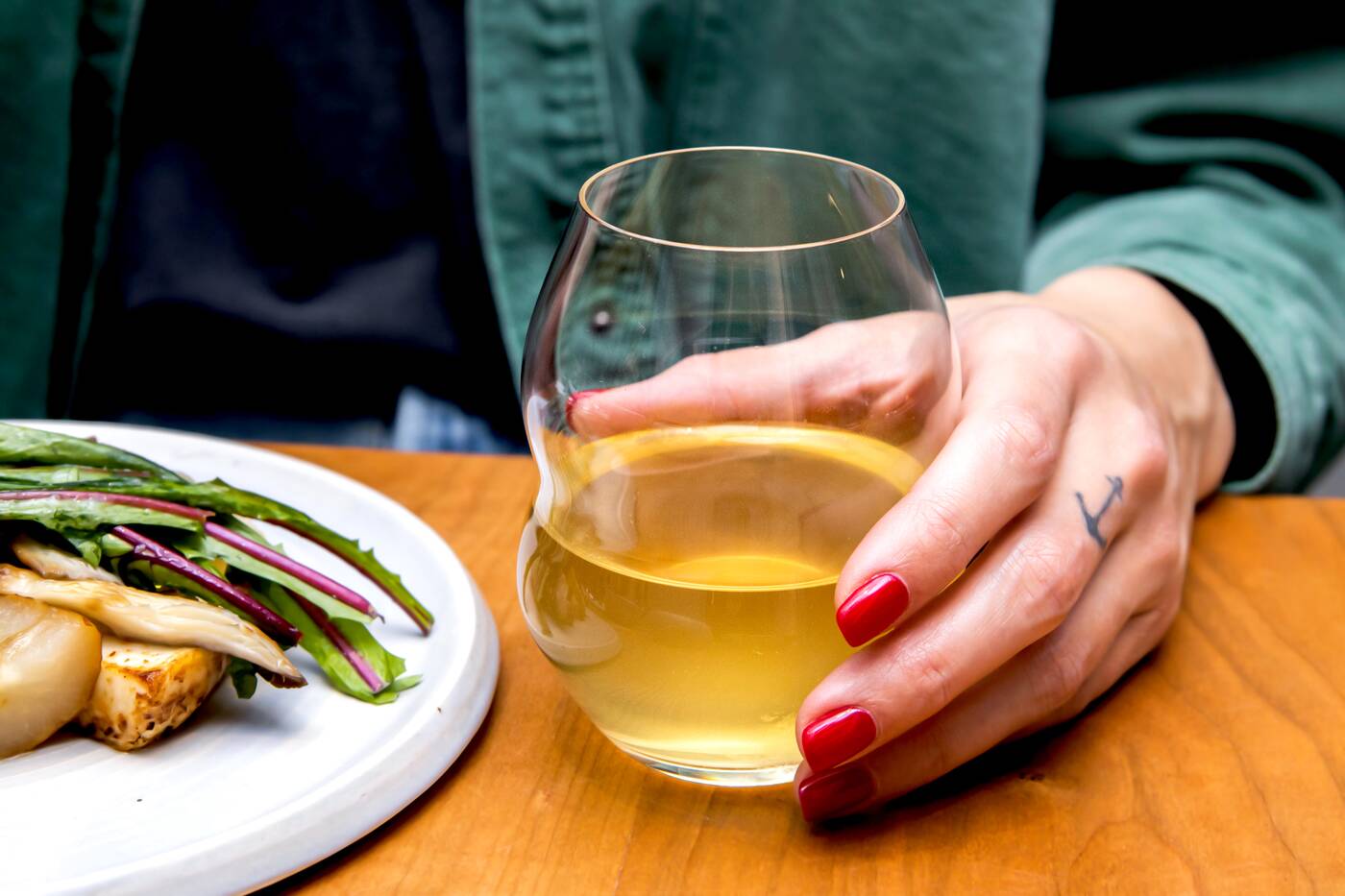 Organic, privately-sold wines that you won't be able to find at LCBO hail from all over including Italy, Austria, Spain and Germany, and the menu lets you in on which courses pair best with each.

Orote roughly translates to 'completeness,' which is exactly how chef Kwang wants everyone to feel after the five-course meal is through. 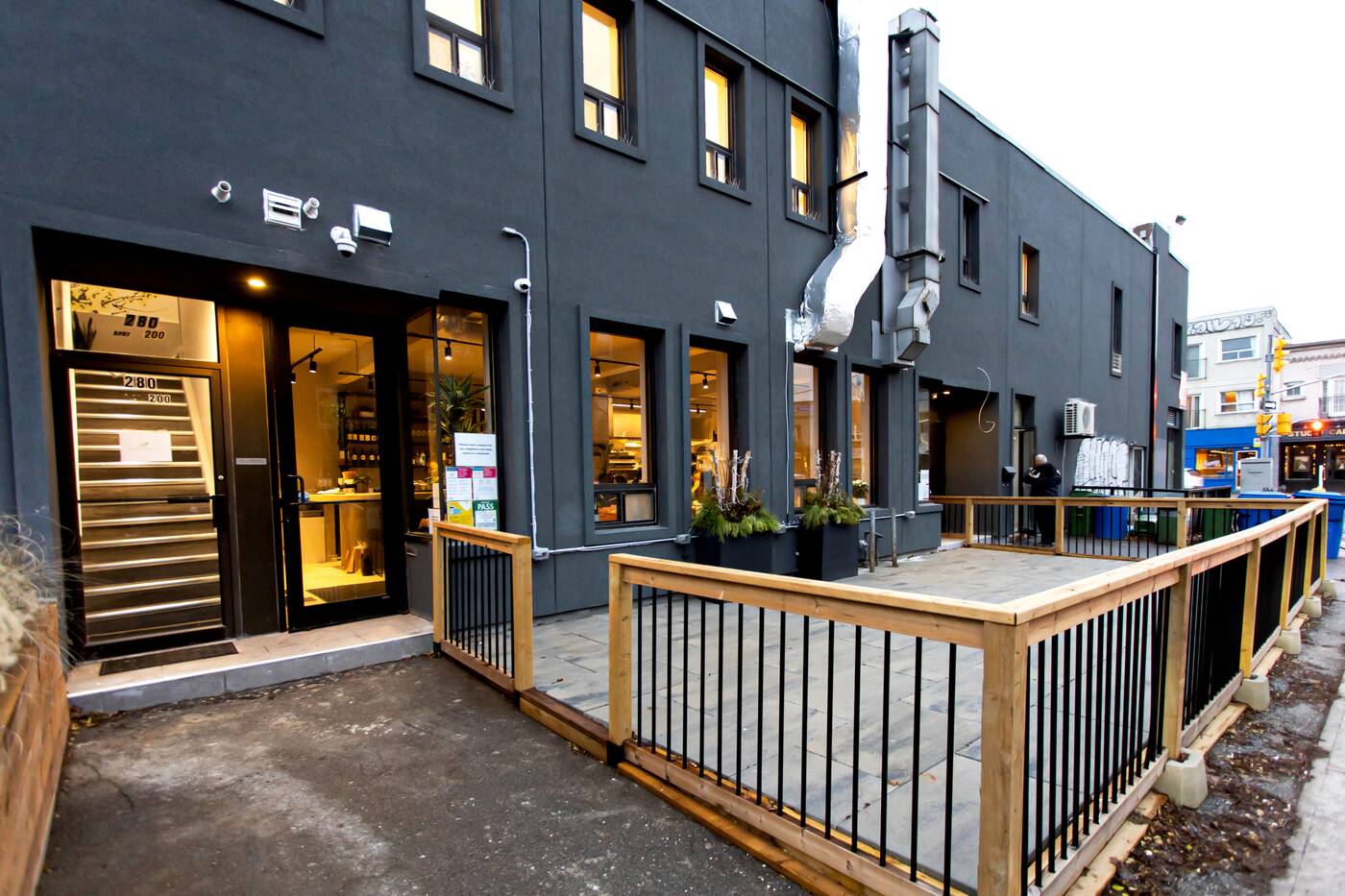