Okonomi House is known for their savoury Japanese-style pancakes, which they've been serving out of the restaurant since the 1970s.

Starting as a family business, Ryo Tamaru took ownership after his mother, saying the menu and atmosphere has remained relatively the same for the last four decades. 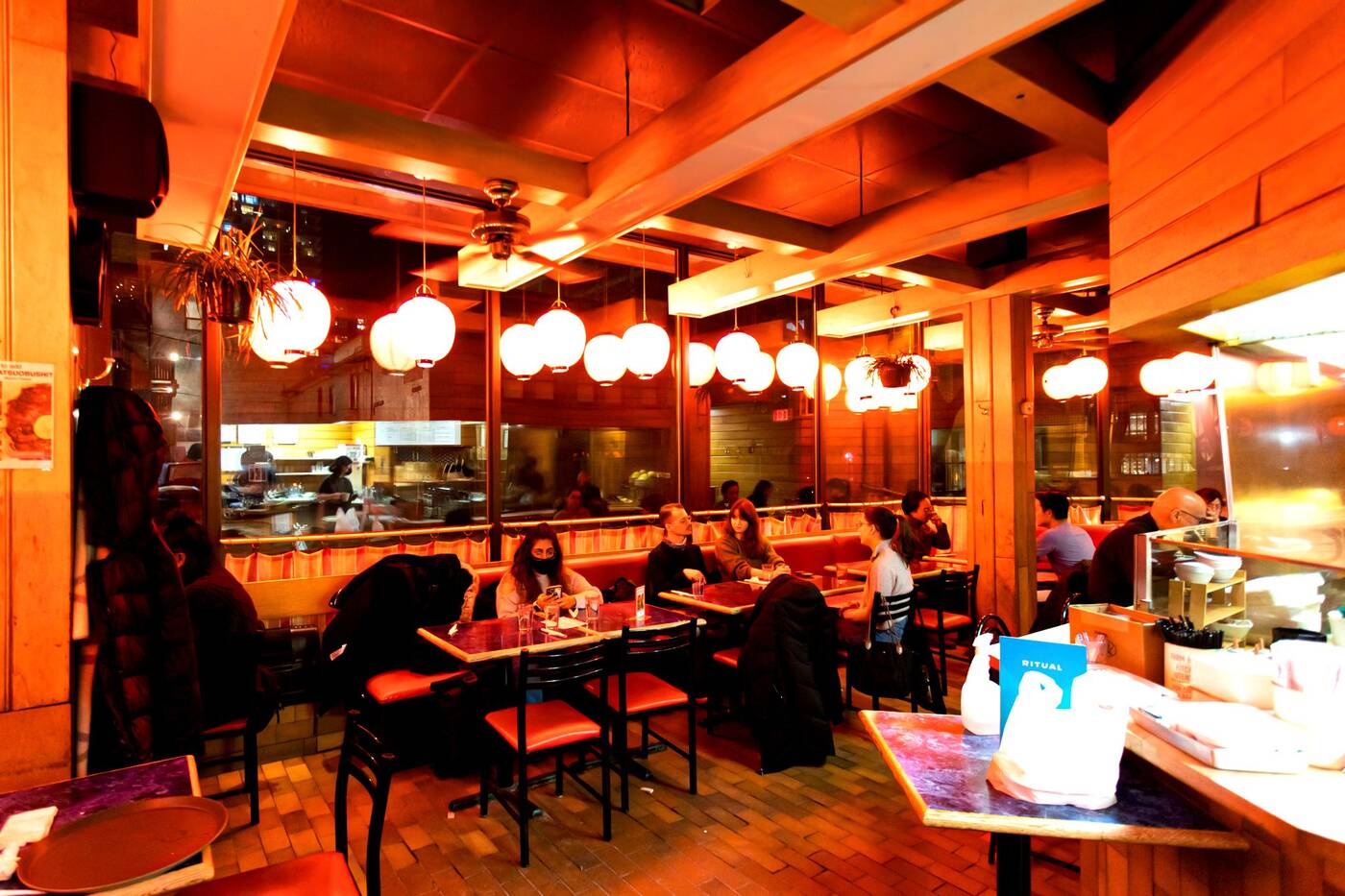 The series of red lanterns that hang from the ceiling are a notable feature about the restaurant that you'll see reflected in historic photos of Okonomi House.

Not only does this spot guarantee good eats, but I imagine you'll also have an opportunity to upgrade your Instagram grid while visiting. 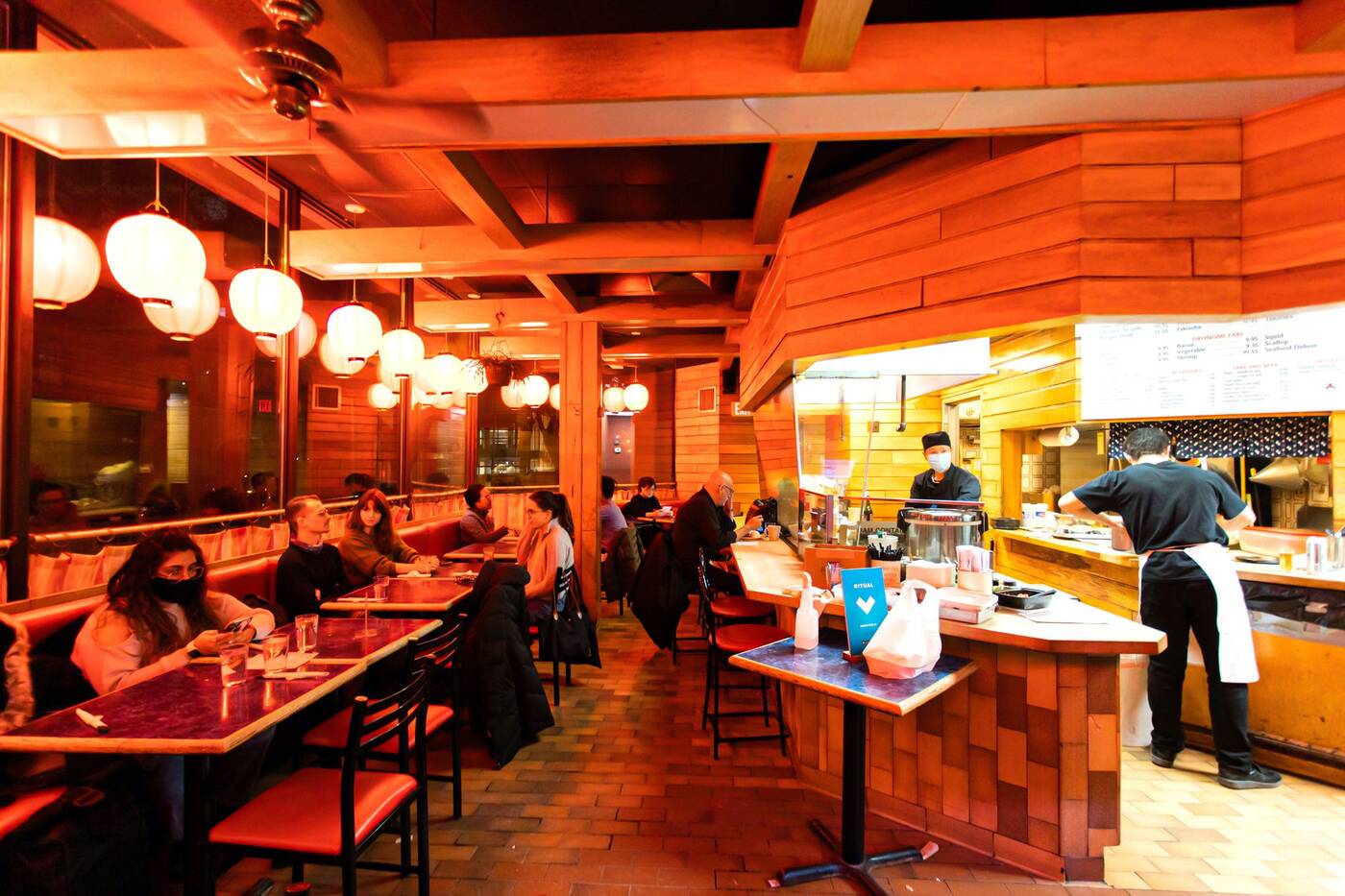 The glowing red aesthetic is quite prominent from the interior and exterior at night, depending on the vibe of the photo you're going for. 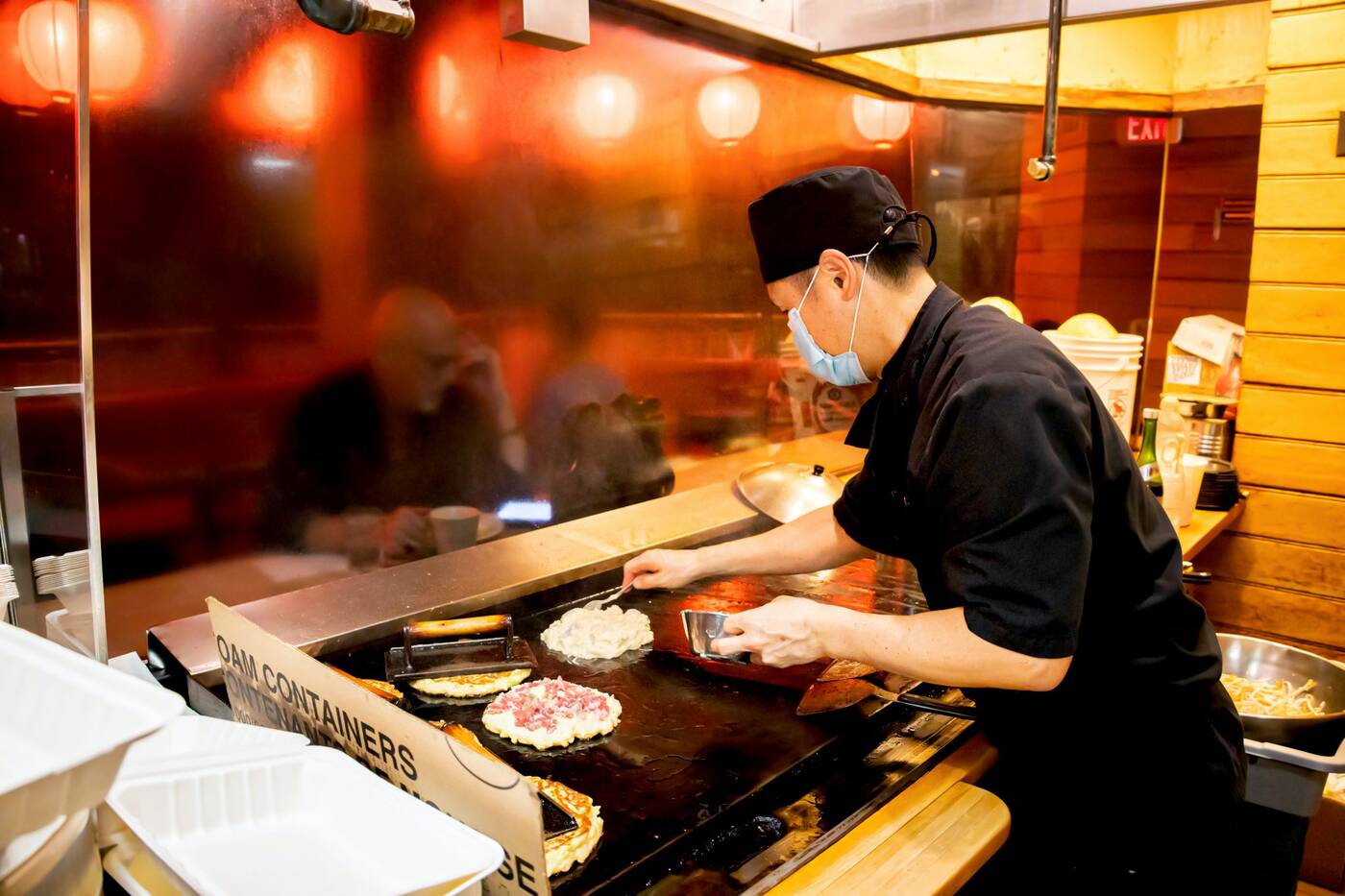 The pancakes here are called Okonomiyaki, a common find in Japan where you typically cook the flapjacks on a grill at your own table. 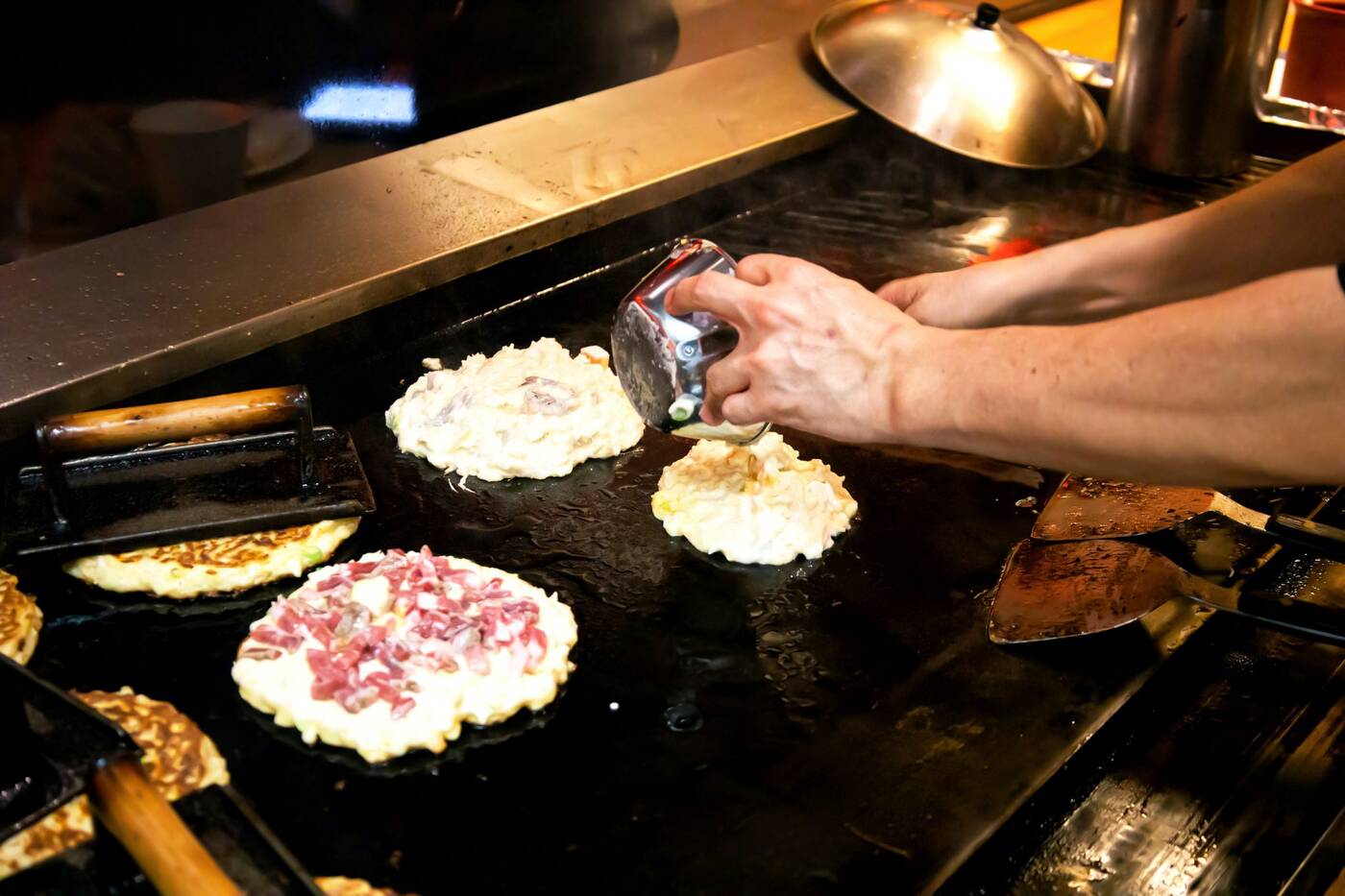 In Toronto, Okonomi House is flipping them for you. The batter is made of chopped cabbage, milk, flour, eggs and takes between 7 to 8 minutes to fully cook.

A heavy helping of each is poured into the centre of the batter on the grill and cook inside the pancake itself. 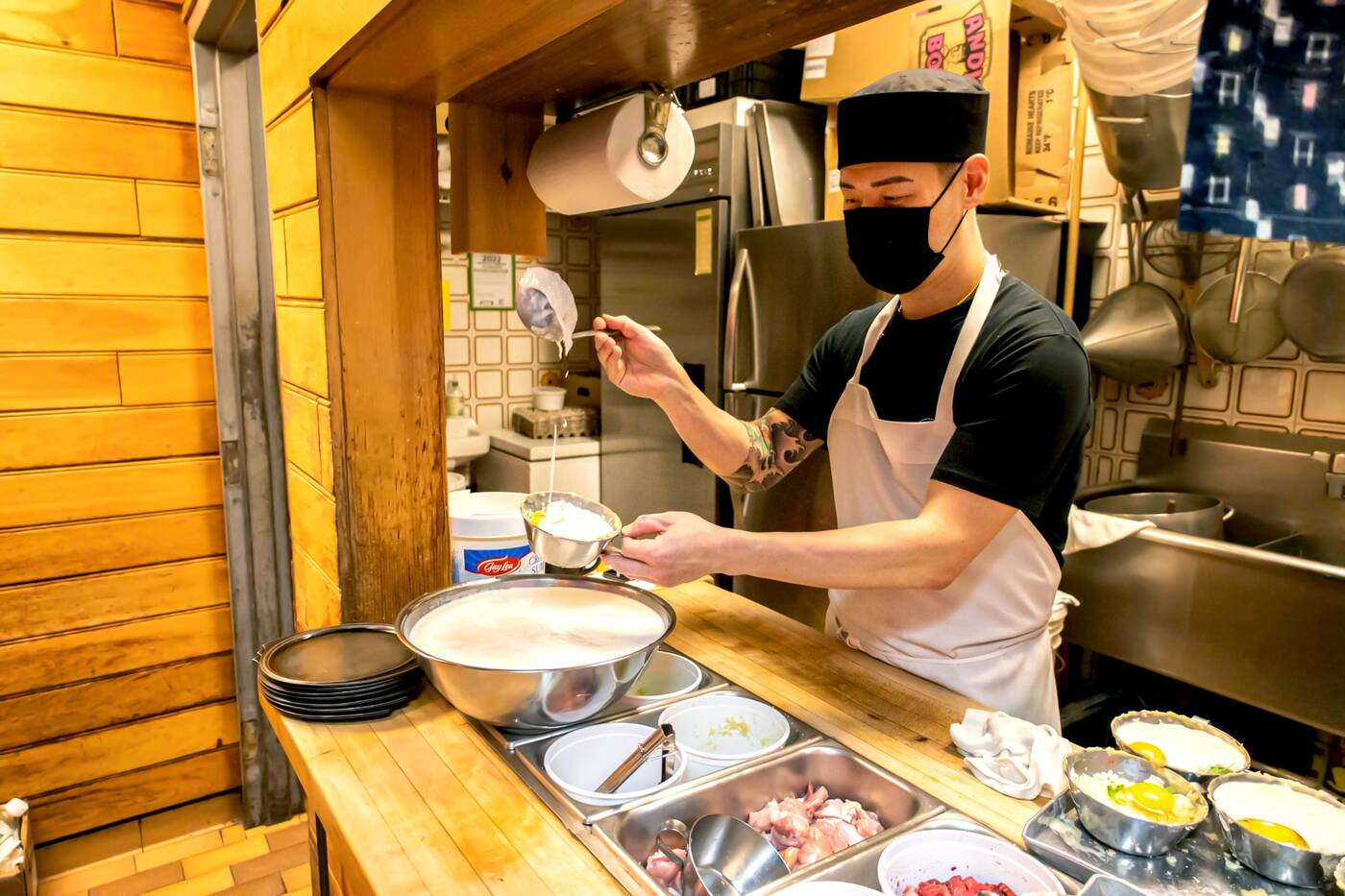 They're much thicker with a crispy surface, compared to the panckaes you might eat for breakfast, however Okonomiyaki is meant to be eaten for lunch or dinner.

Pick from your choice of meat or vegetable fillings as they range anywhere between beef to seafood options. 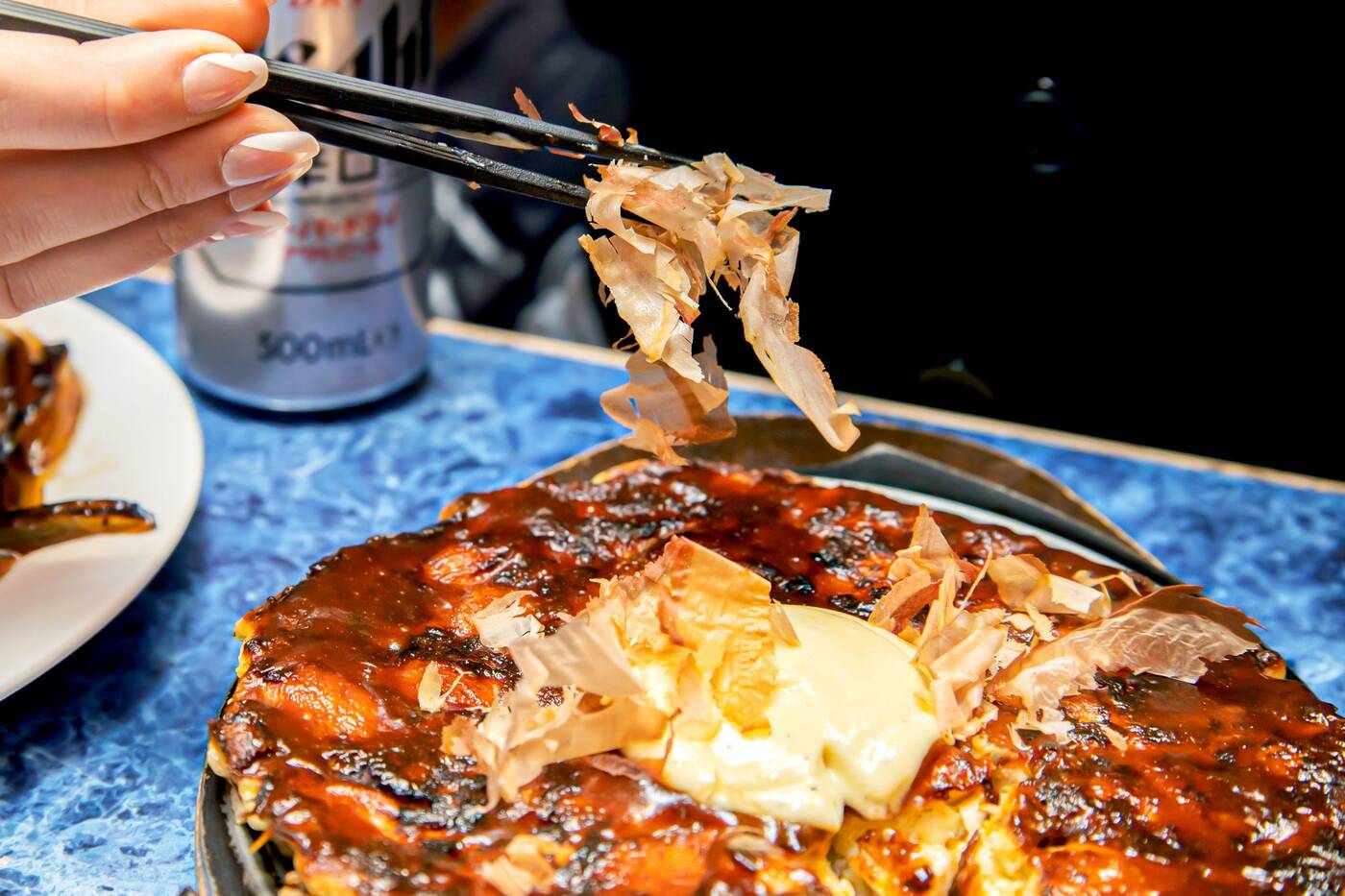 Before diving into one, check out Okonomi's popular sprinkled toppings that include dried seaweed or fish flakes as another addition of texture to the pancake. 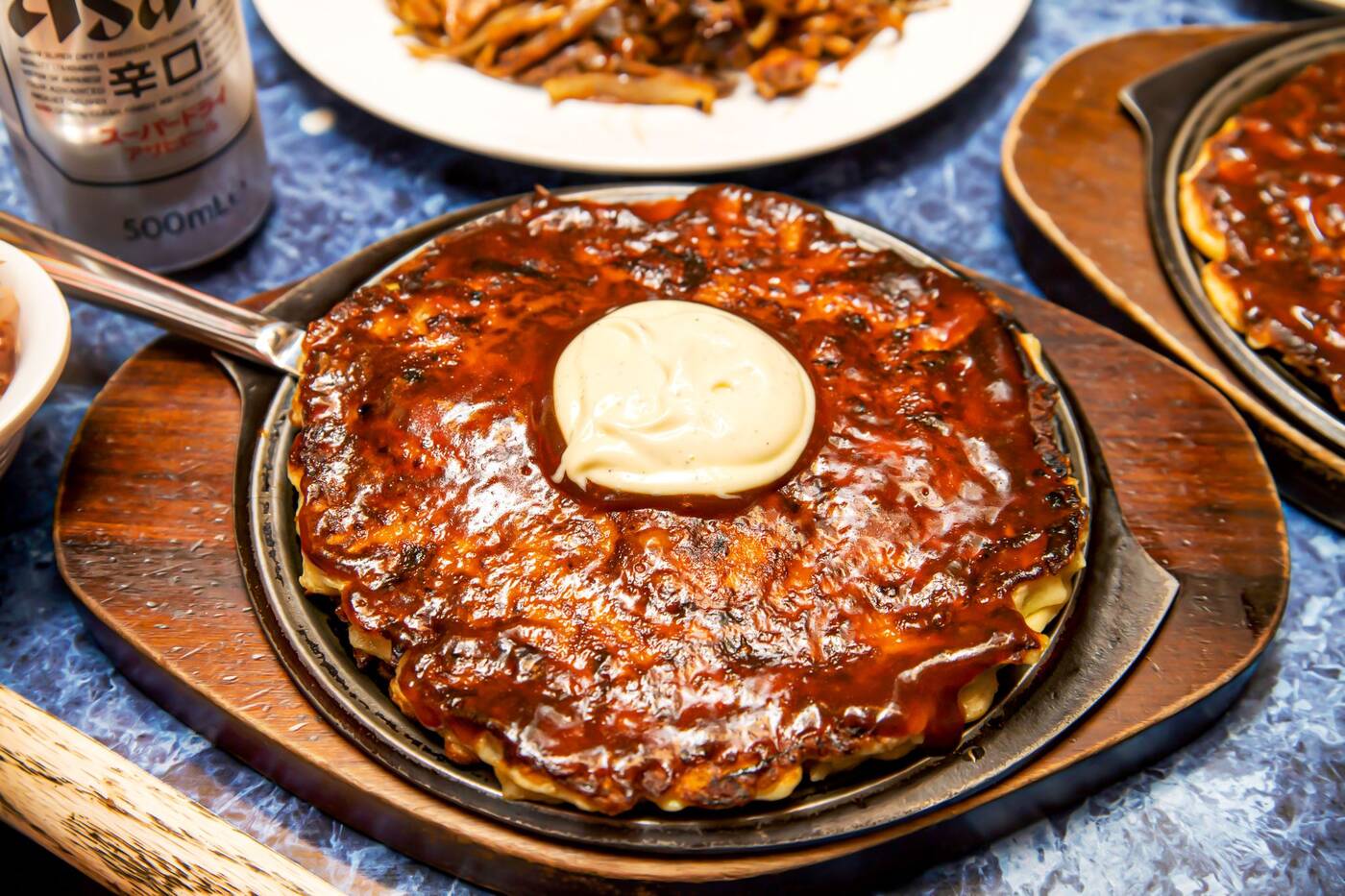 Both pancakes came smothered in Okonomi Sauce, a blend of Tonkatsu sauce and ketchup. In addition to a thick dollop of house-made mayonnaise which made the savoury flavour a little more dynamic. 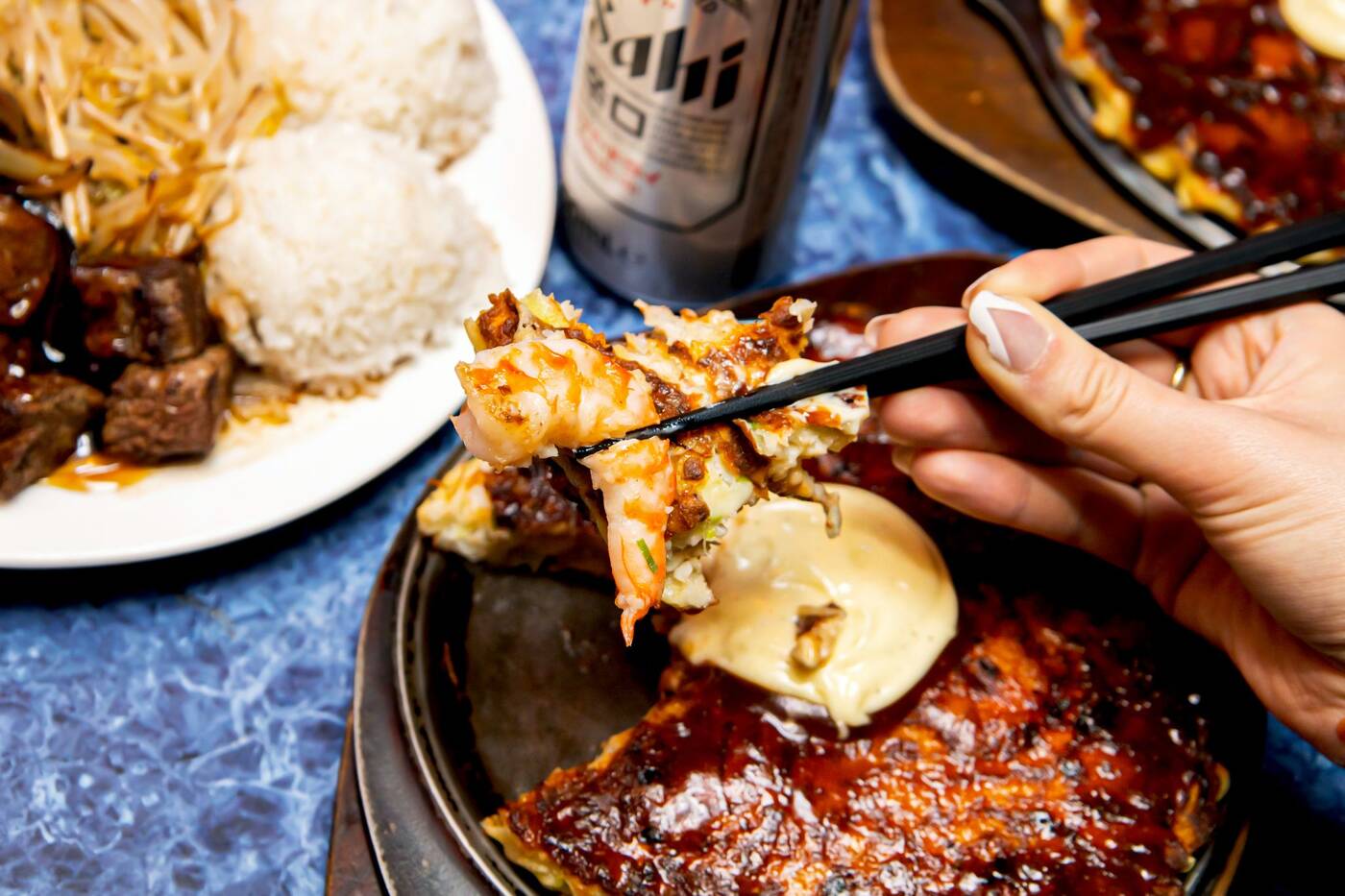 The chicken filling is a self-explanatory, expect crispy bits of the meat complimenting the toasty flapjack.

Each bite of the Seafood Deluxe offers a blend of thick tiger shrimp, scallops, squid and crab sticks neatly stuffed into the breading of the pancake. 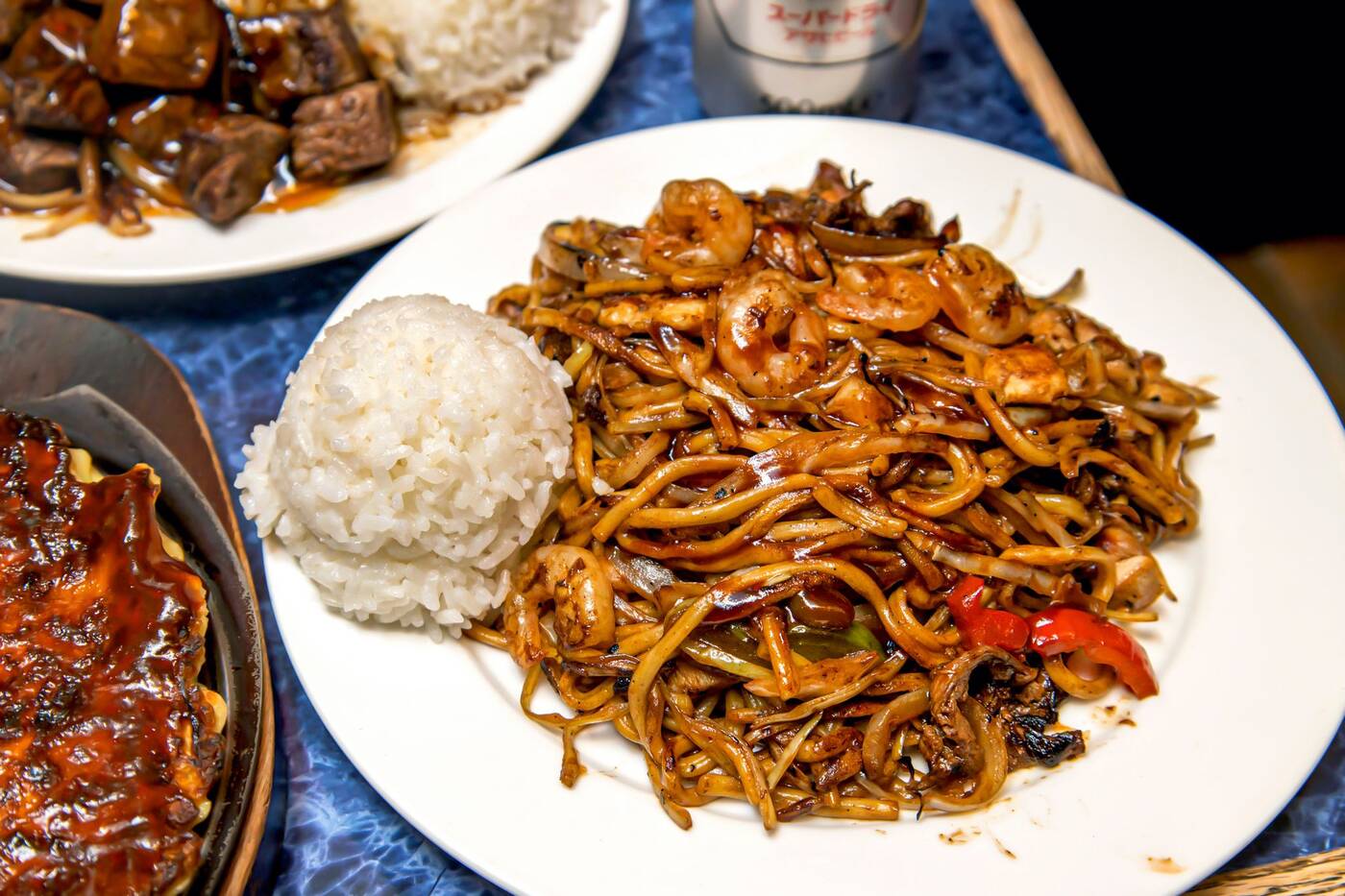 Yakisoba ($12.95) is a loved noodle dish at Okonomi House and will guarantee you leftovers for the next day if you order it. 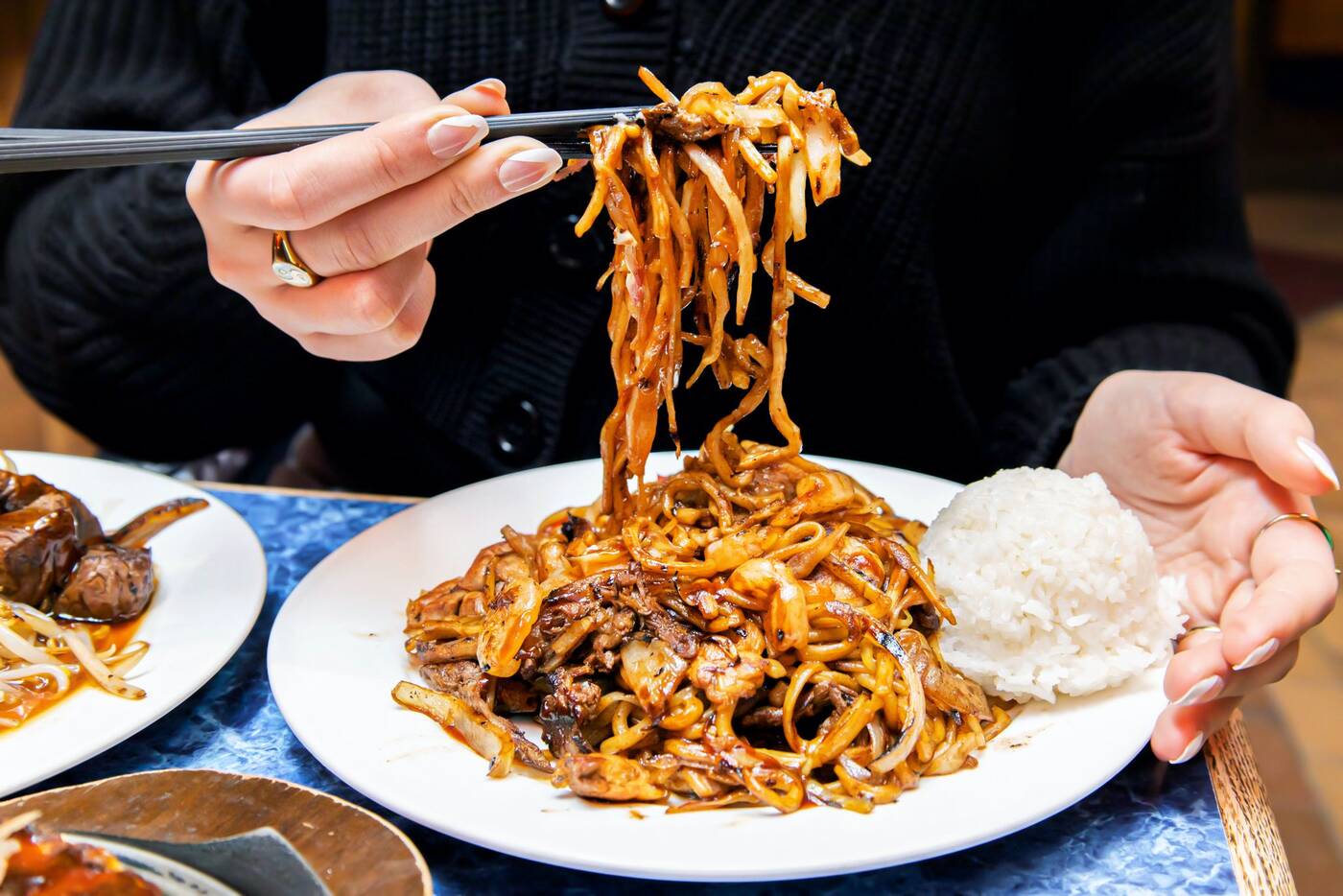 Pull apart a mountain of stir-fried noodles that are cooked in a sweet and sour teriyaki sauce, adorned with beef, tiny shrimps, chicken and a vegetable mix. A small ball of white rice accompanies this dish as a side. 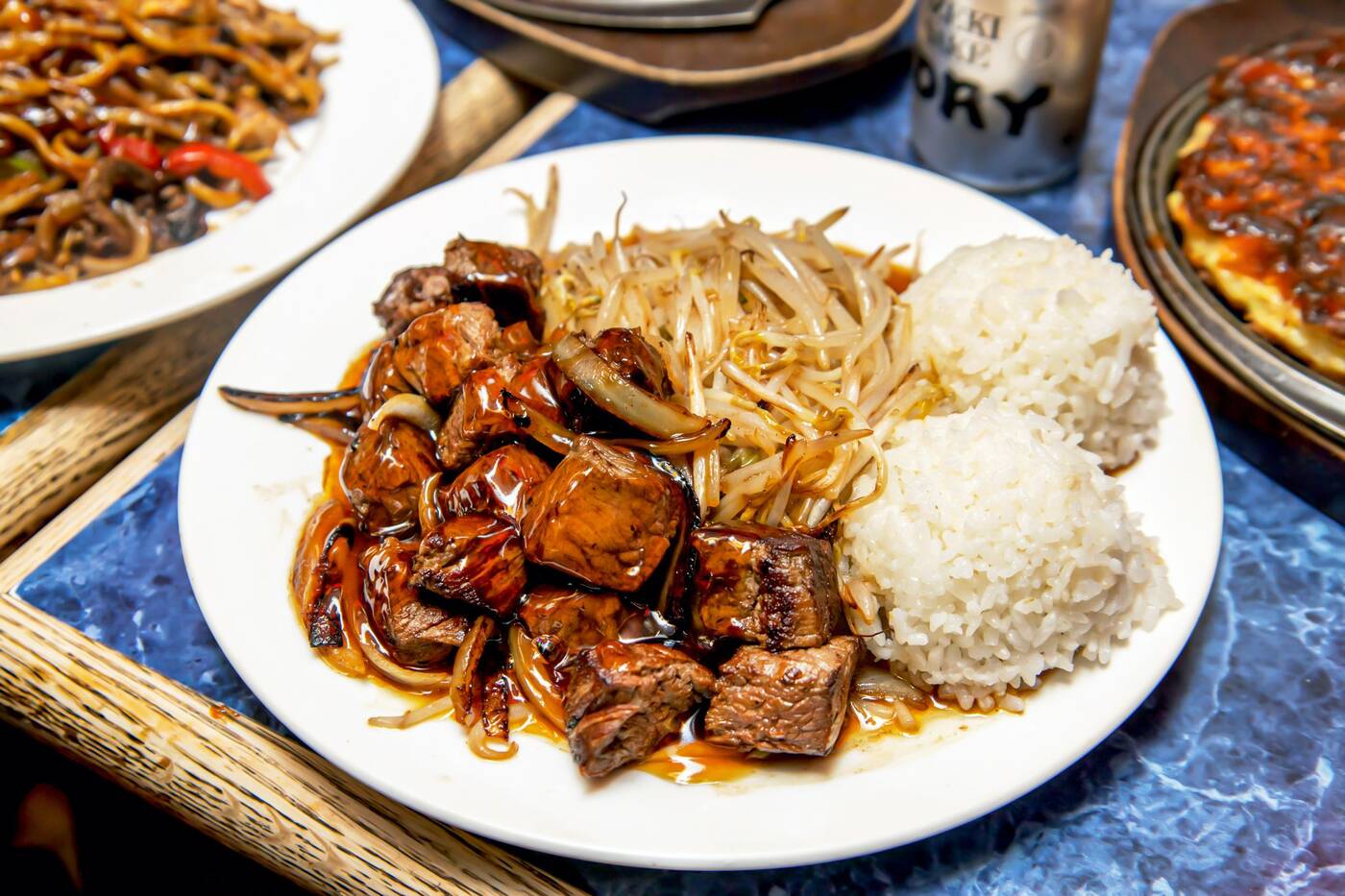 The Beef Teriyaki ($17.55) is the kind of dish you won't stop thinking about, even weeks after you've eaten it.

Cubes of tender beef covered in teriyaki sauce melt in your mouth and pair perfectly with a crunchy set of bean sprouts and warm rice that tops the meal off. 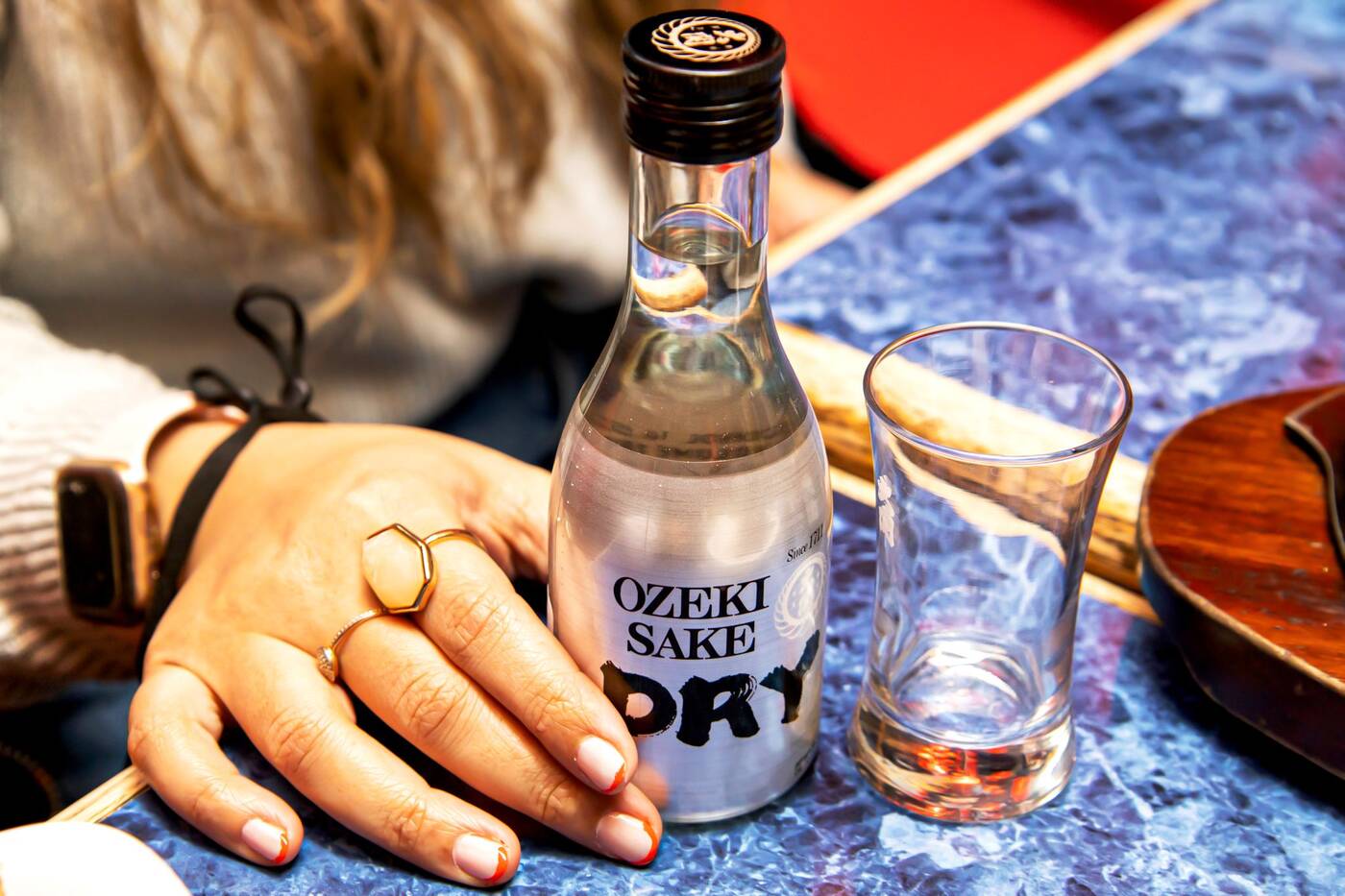 Enjoy your meal with a classic Japanese alcoholic Sake drink ($8.75). Okonomi House serves both hot and cold options, but this dry one goes down like a smooth wine to sip on with your noodles or pancakes. 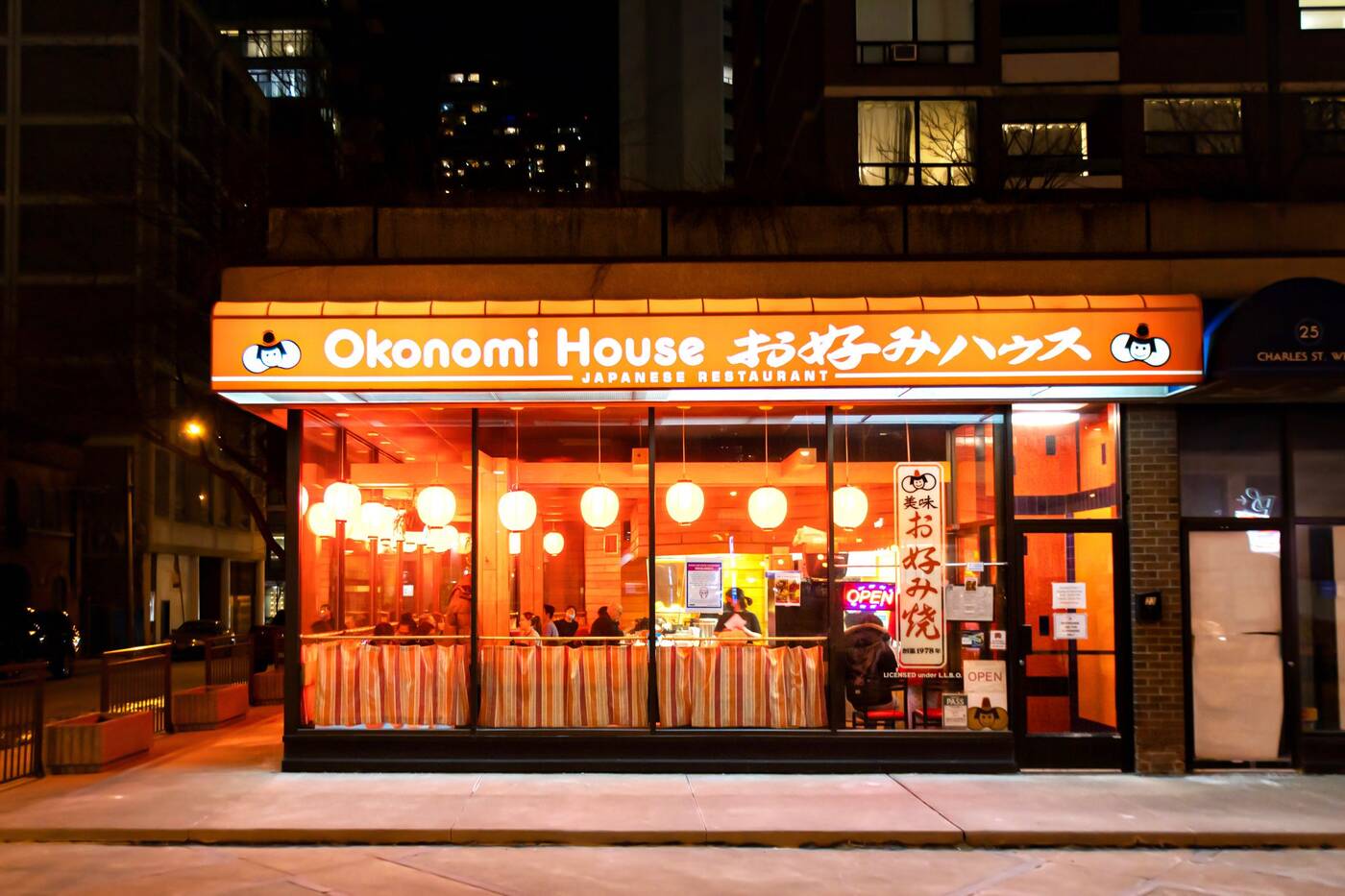 Look for the neon red lights that pour out of the corner where Okonomi House sits. It's the most recognizable and eye-catching food spot on this block, just off of Yonge Street and south of Bloor.