Lena is a new restaurant with historic roots. It's located in the former Hudson Bay (now Saks ) and the multi-storey venue embraces the building's art deco accents.

The etched stained glass, oxidized copper cornices and grand staircases are all original, while new features, by DesignAgency, include an octagonal bar on the main floor as well as quirky patterns, luxe velvet booths and rich leather upholstery. 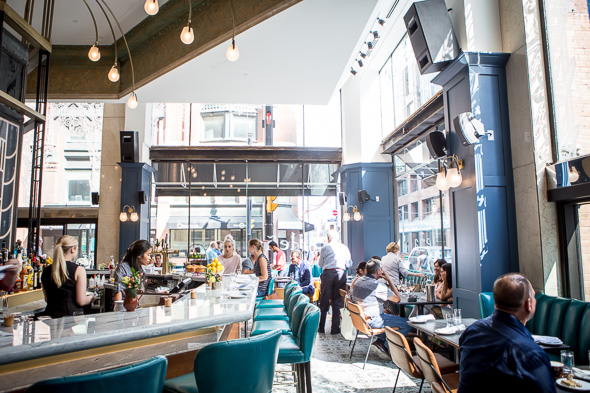 The cuisine looks back a couple of generations too. The restaurant is named in honour of O&B executive chef Anthony Walsh's mother in-law Elena and the menu draws inspiration from her South American heritage. It's peppered with family recipes executed by chef Julie Marteleira. 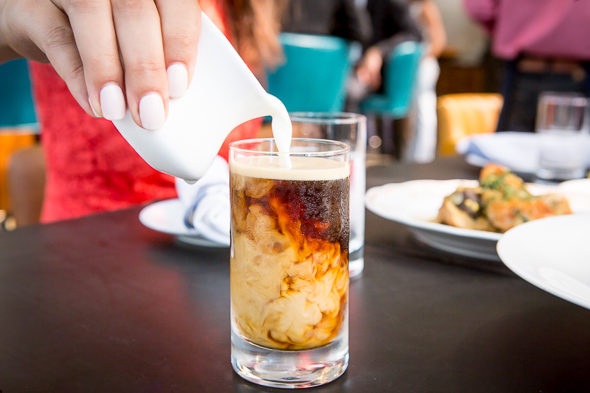 It's an all day restaurant where breakfast is not forgotten. Latin-style morning meals include light options like breakfast empanadas ($17) and potato-egg tortillas ($6) alongside Propeller coffee. 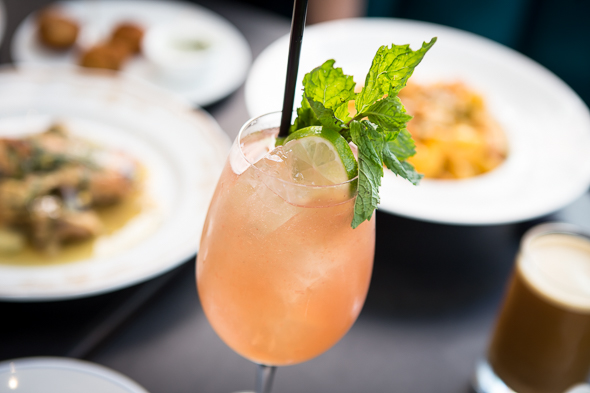 At lunch hour, cocktails seem to be most popular. There are effervescent and easy-to-drink libations, like the Torreon ($12). It's similar to sangria with fortified white wine, rum, freshly pressed watermelon juice and ginger beer. I sip away at it enthusiastically thinking it doesn't seem too boozy. However, when I reread the menu I realize it's a four-ounce drink. Woah, time to slow down. 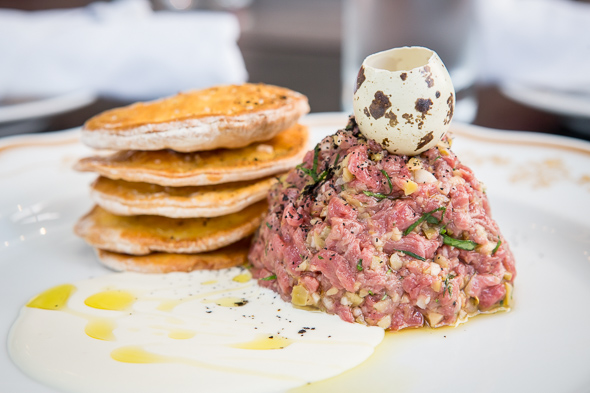 Thankfully, a plate of charred beef tartare ($18) is not far behind. On this dish, the meat is not actually charred, but rather finished with a dusting of vegetable ash and served over a pool of umami-packed oyster mayo and joined by sturdy fennel bizcochos. 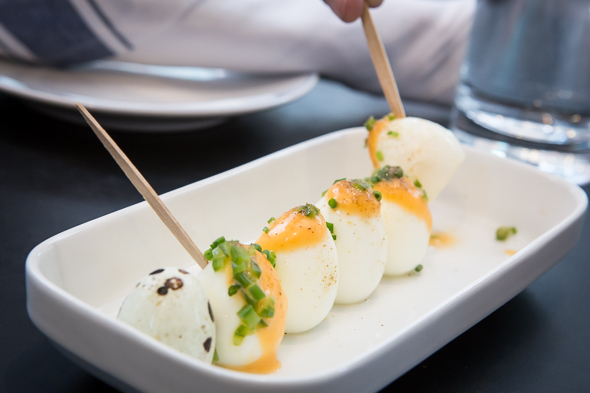 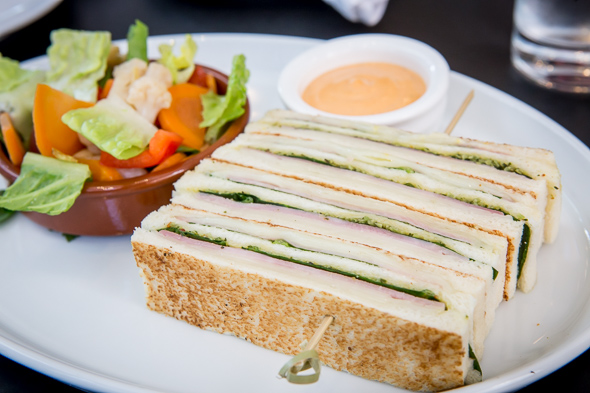 From the selection of sandwiches, I get a beautifully presented Pan de Miga ($16), a classic crustless sandwich that's a staple at delis and taverns throughout Argentina. It's traditionally made with provolone and ham, though this triple-decker is dressed with spinach and green olive relish and pressed on a flat top.

Bravas-style mayo, like you'd find on the traditional spicy potato dish, is supplied on the side for dipping. Meanwhile, there's a giardiniera (pickled veggies) salad with a few leaves of fresh romaine added in to offset all of the briney flavours. 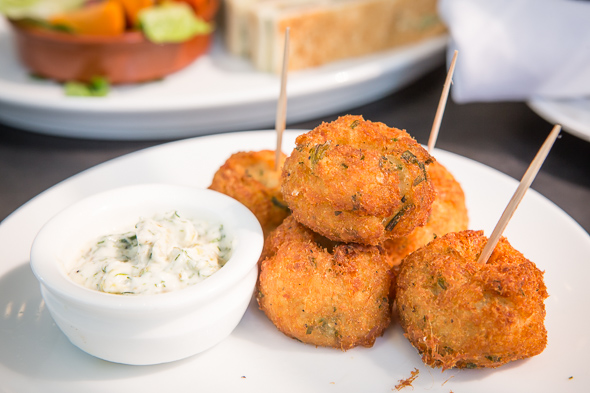 Marteleira's mom makes the salt cod fritters ($11) from scratch for the restaurant. They're flourless, traditional puffs of potato and salted cod fried to a deep golden hue and accompanied by a tangy caper-dill crema. 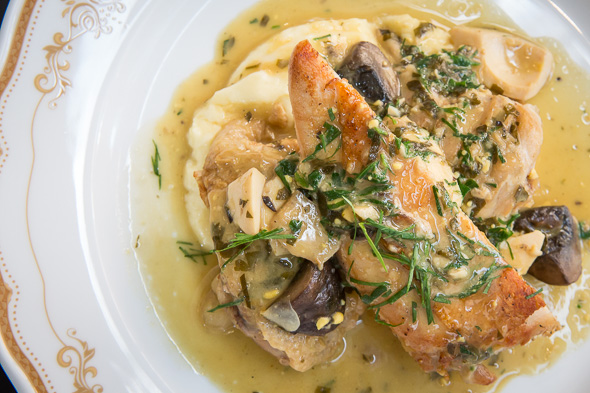 I'm told the Pollo Dona Aurora ($27) is one of Elena's signature dishes and is quickly becoming a house favourite.

It sounds so simple; chicken braised in white wine with cremini mushrooms, saffron, bay leaves and hard boiled eggs added somewhere towards the end. The flavours far exceed the sum of its parts. The meat is moist, the sauce is rich and it's accompanied by some of the most buttery potatoes I've ever encountered. 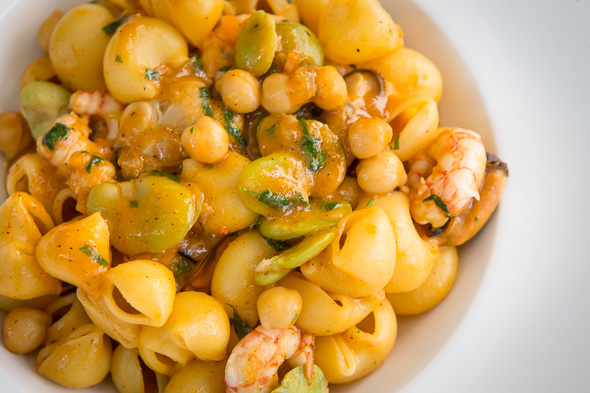 The Caldoso ($27) certainly counts as comfort food too with canestri noodles tossed in a loose red pepper and white wine sauce, garbanzos and fava beans. It's crowned with a medley of stunning seafood, including sidestripe prawns, mussels and clams. 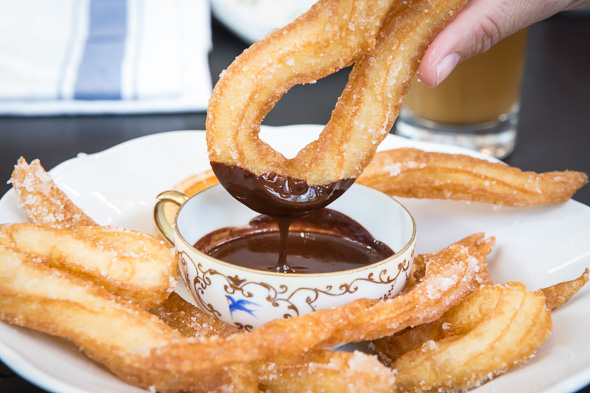 For dessert, I get churros dipped in Soma hot chocolate. 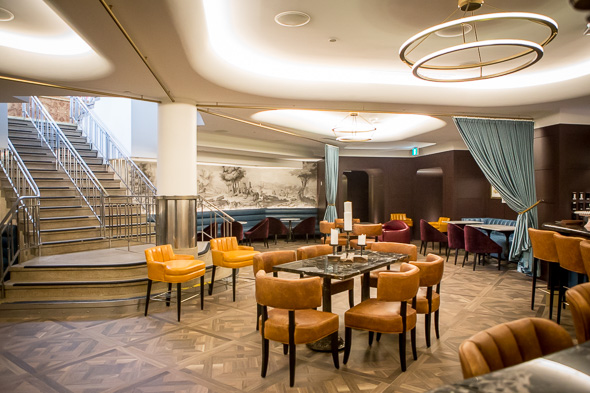 While the main room might seem small, there's a lower level bar and two upper floors with private and semi-private dining rooms. Explore the place and you might even find an old rotary phone where you can eavesdrop on Elena herself. 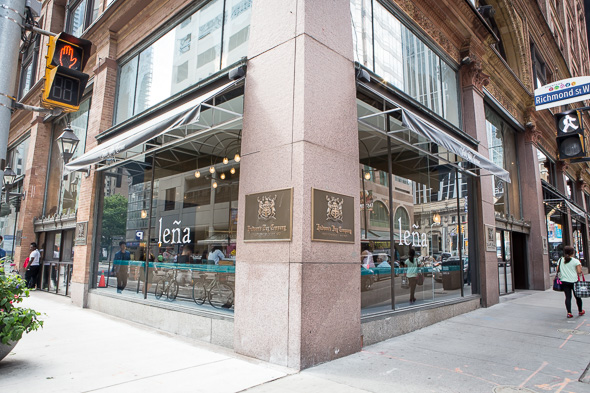