Ka Chi is currently open but their offerings and services may be affected due to the pandemic. Please contact the business directly for more information about any changes. Is this your business? Please contact us if you would like to update this message.

Along St Andrew's St, where Chinatown meets Kensington Market, a little Korean restaurant is busy winning over regulars from both sides of the neighbourhood.

I'd just left the Moonbean cafe in Kensington with intentions of getting some dumplings in Chinatown when Ka Chi caught my eye. Texting my partner who was en route, I spell out the change of plans and head inside to get a table for two. 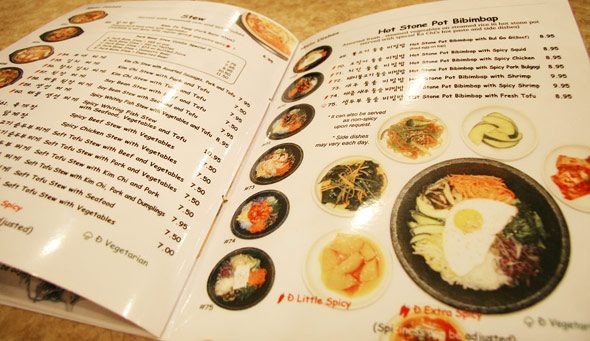 We start with the Potato Pancake ($5.95), which is pretty much the same as a latka or plate-sized hash-brown. Instead of straight potato though, it's mixed with a colourful blend of chopped veggies and served with a soy-based sauce. Altogether it's really fresh and fluffy for a fried pancake, though naturally a bit oily. Still, we love it and would order it again in a heartbeat.

In terms of mains, we order the Glass Noodles with Vegetables ($7.95) and the Bibimbop with Beef and Fried Egg ($8.95) - 'cause no review is complete without it.

While that was being prepared we were treated to an assortment of seven different pickled Korean specialties (pictured at the top). 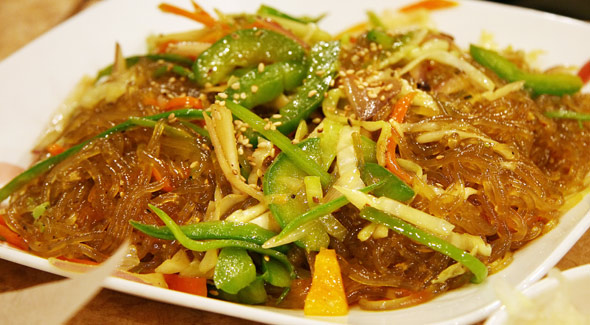 The glass noodles arrive first. The portion is generous but not ridiculous and it's topped with plenty of green pepper, carrots, cabbage and sesame seeds. I thought it could have used a pinch more salt, but coming from a spicy kimchee tasting, I wouldn't trust myself to be the judge of something so delicate at that moment. 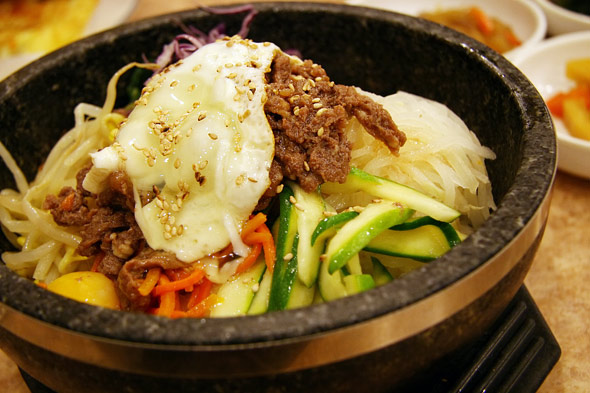 Beef Bibimbop arrives next and looks amazing. The sizzling hot stone pot goes wild as I mix some chili sauce into the massive bowl of steamed rice, veggies and thinly sliced beef. The only weak spot of this dish was that the egg yolk was nearly fully cooked while the egg white was a little too raw on top. Reverse those two and this could have been one of the best bibimbop bowls I've had.