Gusto 101 is currently open but their offerings and services may be affected due to the pandemic. Please contact the business directly for more information about any changes. Is this your business? Please contact us if you would like to update this message.

Gusto 101 is the latest Italian eatery to open its doors in and around King West, located on Portland just south of Adelaide. As the name implies, the restaurant gets back to basics with simple country dishes that highlight their quality ingredients.

It's almost hard to believe that this space was recently a mechanic's garage â the redesign is gorgeous! Even with vaulted ceilings, an open concept kitchen and a packed house, the acoustics were not an issue, as our party was easily able to catch up without yelling over one another. The lighting fosters a sense of intimacy with pools of light partitioning tables from one another. Perfect for dates and parties of four, it's best to come early if you don't want to wait. They're not taking reservations at present. 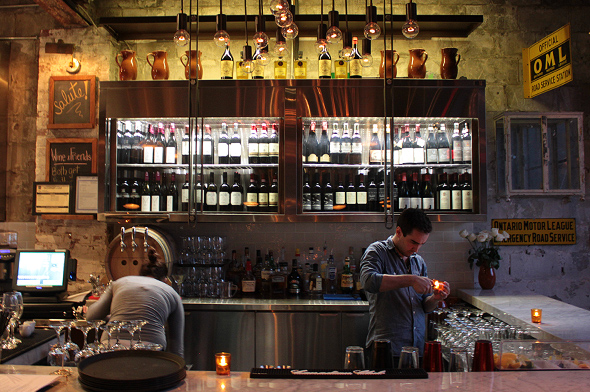 The wine list has an extensive collection of Italian wines, but tonight we're interested in the house label, Vini di Gusto, we've heard so much about. Unfortunately for us, they're completely sold out, and at a loonie an ounce I can understand why. The latest batch, which is fermented in their basement cellar, needed about two days more. So we opted for a cocktail: the bourbon-based, Lambretta ($12). Surprisingly, it had a hint of chili that pulled out the woodiness of the Bourbon without any lingering heat. The other cocktail, the name of which escapes me, fell a bit flat with a diluted weak lemon pucker. 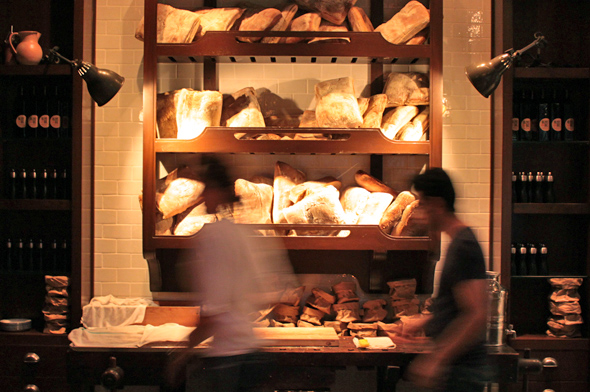 The house made Focaccia and Ciabatta bread was amazing. I've never seen leavening in Focaccia like that. Both were light and airy with a wonderful caramelized crust. Our server even gave us a sample of their small batch EVOO to dip it in. Needless to say, we appreciated the offer. This was some of the best service I've ever experienced in Toronto â it's attentive without being intruding and jovial but not forced.

I love squid ink pasta, which is becoming increasingly uncommon at local restaurants. So I jumped at the chance and order the Tagliolini al Nero ($14.95) even over my other favorite, a grilled Branzino with a citrus emulsion ($21.95). I convinced a friend to order the latter dish in hopes of stealing a bite. 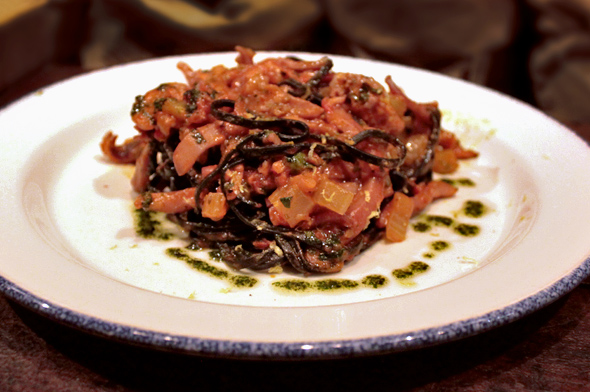 A black briny pasta is a Machiavellian affair that causes some to grimace. But I thought it was delicious, especially with the tender cuttlefish, a slightly sweeter tasting squid. It was a huge portion that was too rich for me to finish. The Branzino, meanwhile, was moist and pared nicely with the bright citrus sauce, and the inclusion of perfectly seasoned sunchokes is a nice touch. 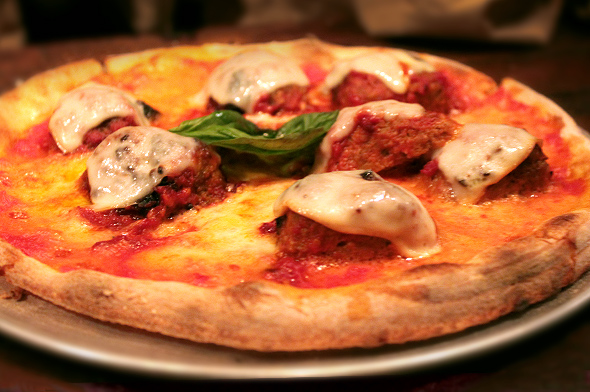 The Polpette Pizza, with sliced meatballs and smoked provolone, was a crowd favorite. The crust was of a chewier variety than the Neapolitan style that's taken the city by storm, and thus a nice change. The meatballs were spot on and the hint of smoke from the cheese balanced the garlicky sauce. 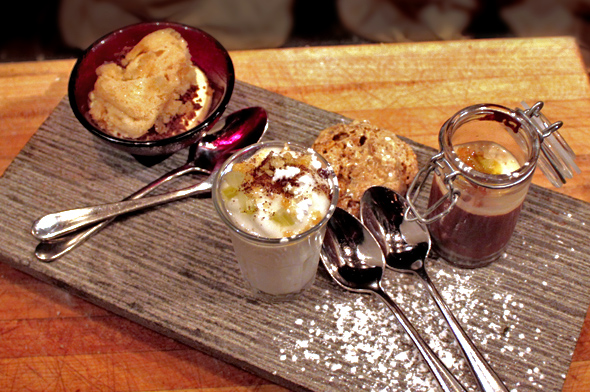 I suppose our eyes were hungrier than our stomachs when we noticed the adjacent table's dessert. We ordered the quatro sampler: tiramsu, chocolate creme with salted caramel, an iced Lemoncello frizzante, and house made biscotti. All were a new twist on old favourites, and most were hits. There was one miss, though. The rock salt in the caramel was enough to overpower the entire dessert including the dark chocolate. Still, dessert was the most adventurous part of a menu that tends to adhere to classic standards. 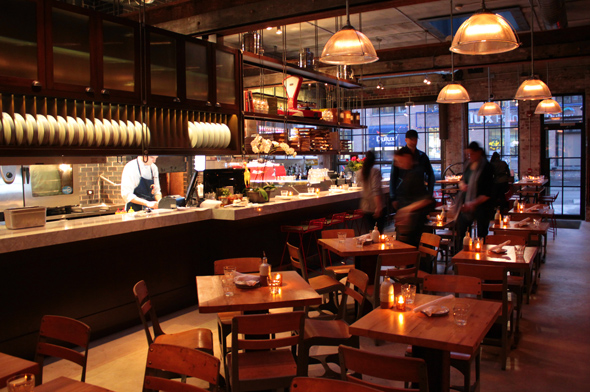 Gusto 101 has been the recipient of much buzz, but I suspect it has the legs to become a fixture of the Toronto's Italian dining scene. There's a few kinks to be ironed out but that's to be expected with any restaurant in its first couple of months. With lunch service starting up shortly, there will be more ample opportunity to snag a table, which is good news for the diners of this city. 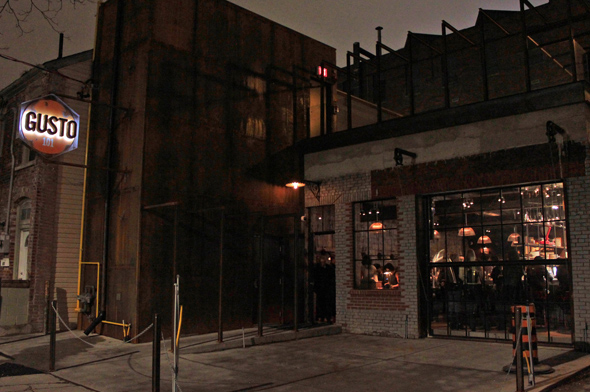