Greenwood Smokehouse BBQ newly occupies the south-side storefront on Danforth at Pape previously the home to the short-lived Slider Revolution . Owner and pit master, Warren DeSimone credits his passion for BBQ to a "rib sandwich made on Wonder Bread" that he first tasted at Lollapalooza, Vegas sometime in the '90s. He's been smoking meats as a hobbyist for 12 or so years now and shares his enthusiasm with his brother, Marky of west-end BBQ joint, Marky & Sparky's .

Inside is panelled with recycled pallets that soak up the smells of meat and fire. Rusted charcoal starter cans are repurposed as lampshades and vintage American advertising, licence plates and pig-themed paraphernalia give the space a rec-room vibe. 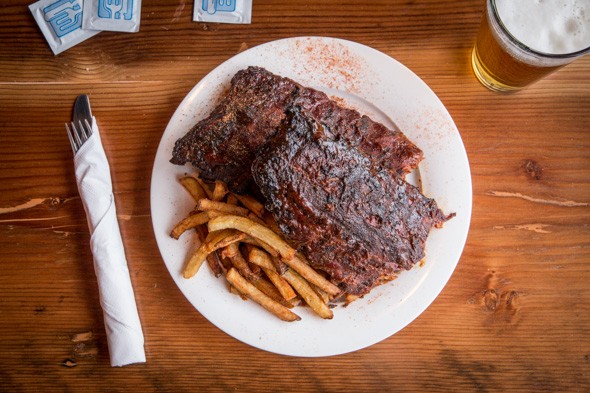 In the kitchen Chef Noel joins DeSimone in creating a line-up of apps, salads and sides to compliment the predominantly meaty menu. Racks of ribs ($25/full or $15/half) arrive to the table slathered with house-made Memphis barbecue sauce and finished with a hit of dry rub and paprika. Fresh cut fries are seasoned with the spice rub too. 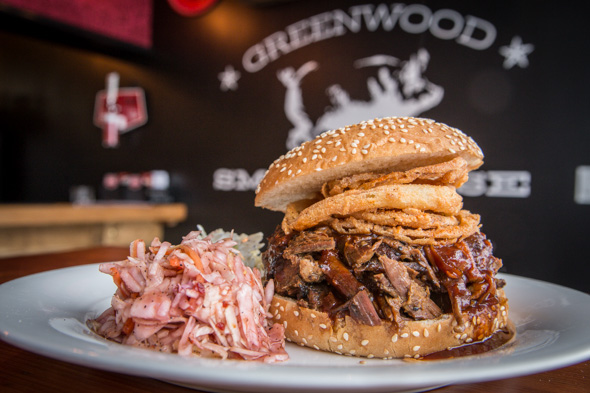 The Southern Carolina Pulled Pork Sandwich ($9) is loaded onto a soft sesame bun. In Lexington-style, the torn meat starts as pork butt, dry brined then rubbed with spice and is then slow smoked over whiskey barrel and hickory for 18 hours in a Southern Pride smoker. The pile of pork is sauced with a sweet mustard, which complements the crispy fried onion rings set on top. Divided coleslaw camps will appreciated a choice of creamy or vinegar-dressed slaws on the side. 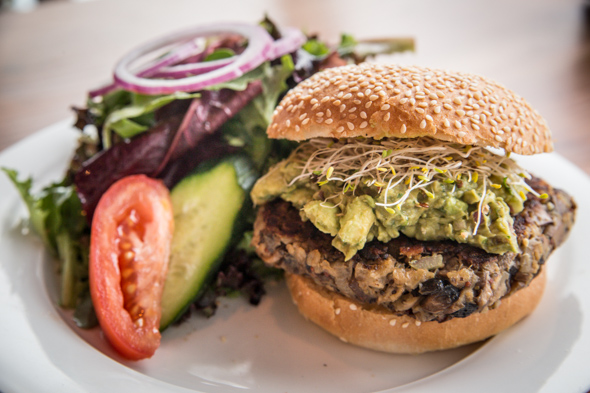 The 6oz mushroom burger ($9) is chunky and substantial. The loosely-formed patty is composed of smoked mushrooms and an eggplant binder. It's finished on a skillet and topped with creamy chipotle guacamole studded with pops of sweet smoked pineapple and alfalfa sprouts for crunch. Surprisingly, the menu offers a number of smoke-infused vegetarian options. The kitchen is equipped with a separate meat-free fryer and skillet. The menu also lists vegan chili ($9) and poutine ($6) made with smoked mushroom gravy -- a byproduct of the burger. 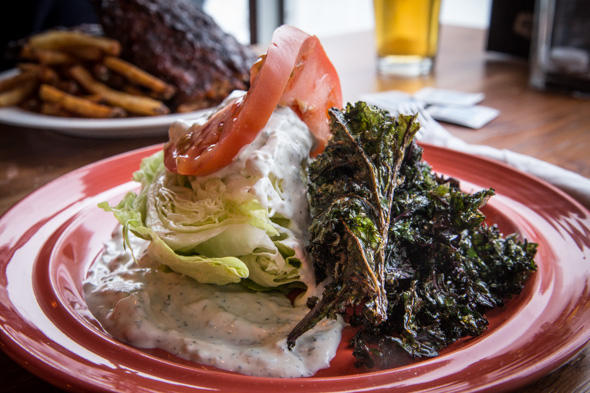 A wedge salad ($8) smothered with house-made blue cheese ranch dressing is served with deep fried kale chips on the side tossed in seasoning. As far as salads go, it's pure junk food and I'm into it... the fat kid in me thinks some smokey lardons wouldn't hurt. 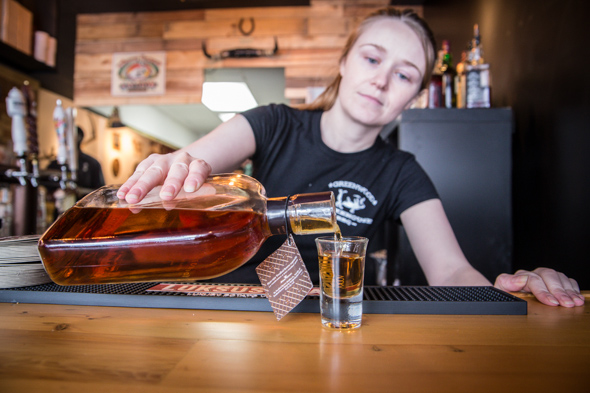 The bar majors in bourbons plus $6 pints of OK Spring 1516, Black Oak Nut Brown, Amsterdam Blonde and Thornbury Apple Cider. The cocktail list is still in development but is set to include smoked bacon and ham hock-infused Manhattans and smoked Caesars developed by bar manager Chris Johnson (an alumni of Calgary's Westin Hotel where the classic cocktail was first invented). 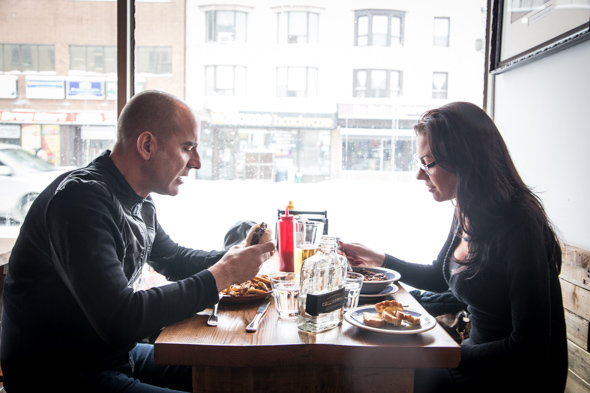 Greenwood Smokehouse BBQ currently opens mid-afternoon and stays open 'til 10/11pm nightly. In the coming weeks, hours will be extended with the launch of a brunch service. Once patio weather rolls around that kitchen plans introduce a late night bites menu too. Take-out orders are welcome. 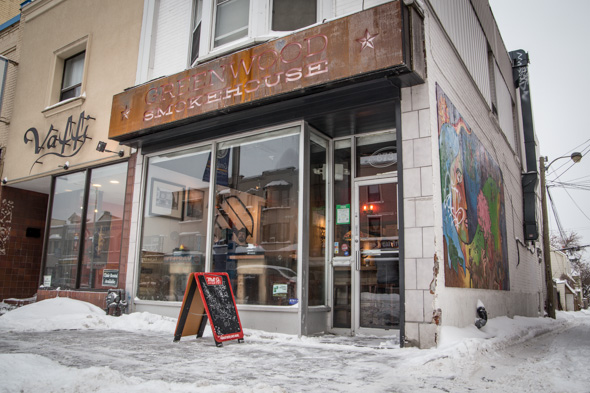