Friday Roots and Vibes operated as a pop-up within the May space before taking over the venue as a full-fledged restaurant with soul food, bourbon cocktails and live entertainment.

That includes comedy and live music, mostly along the lines of R&B, jazz, soul and rap, maybe with the occasional tap dancer thrown in. The basement is actually home to 876 Studio, and with a specially-priced artist menu, Friday Roots and Vibes aims to be a creative hub. 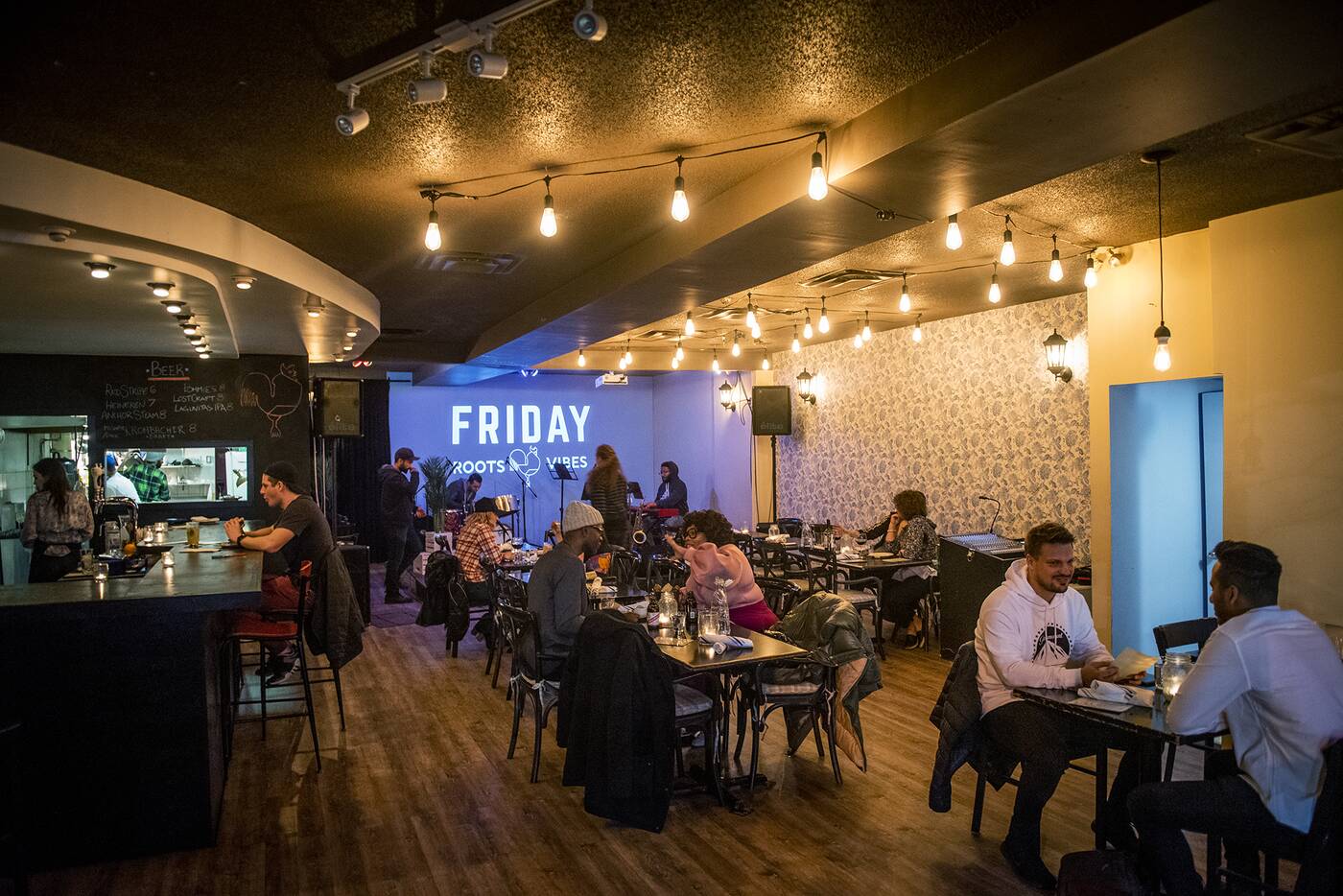 The space is smartly laid out with a stage opposite the front door, a bar under a sweeping curve of lights, an elevated area near the window with a large table seating six and a couple smaller tables creating perfect sight lines. 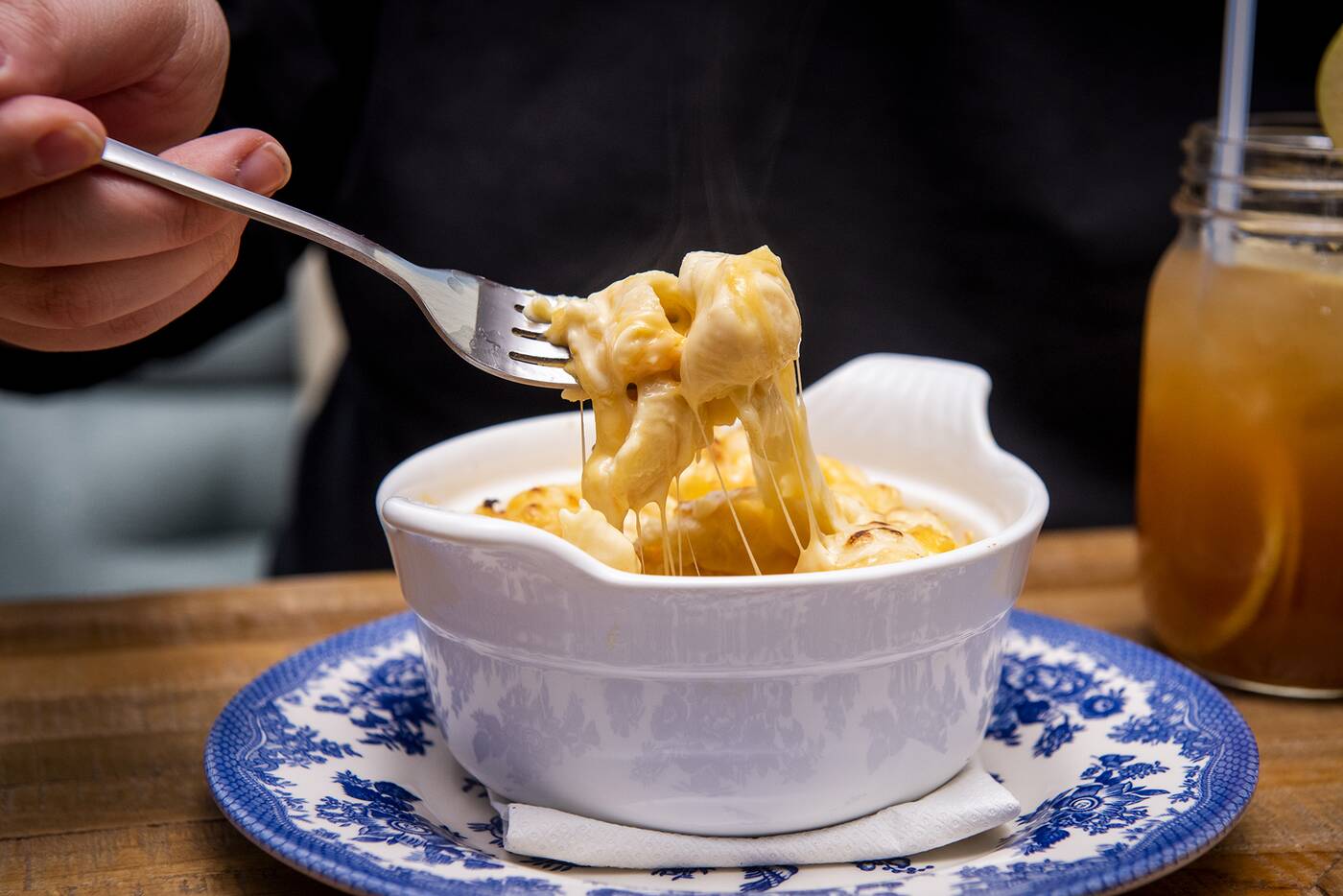 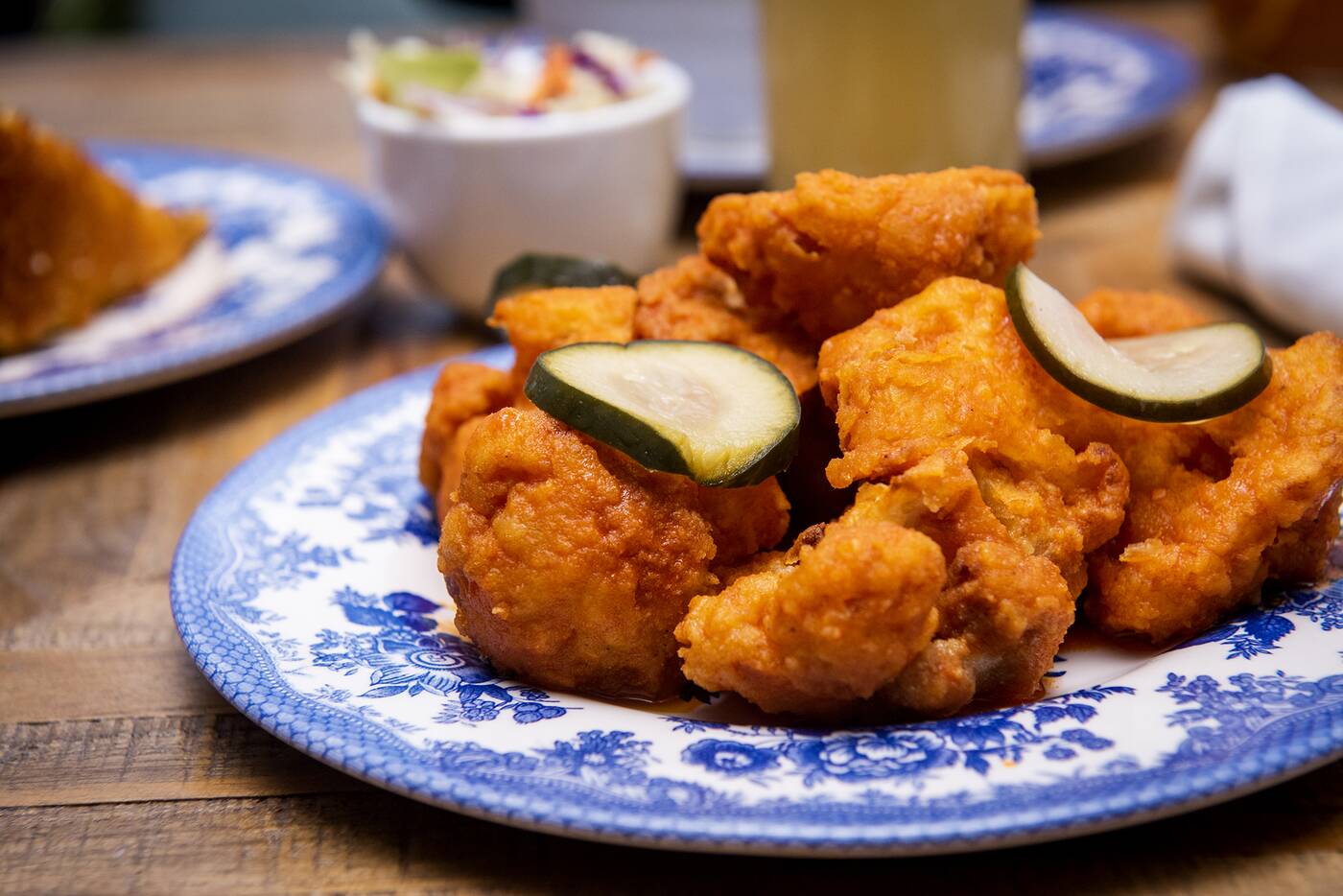 Nashville hot cauliflower bites ($12) give vegans a chance to see what all the Nashville hot fuss is about, the spongy, large florets an equally good vehicle for the fiery orange sauce as chicken, a few pickles and some vinegar providing a little acid to combat the heat. 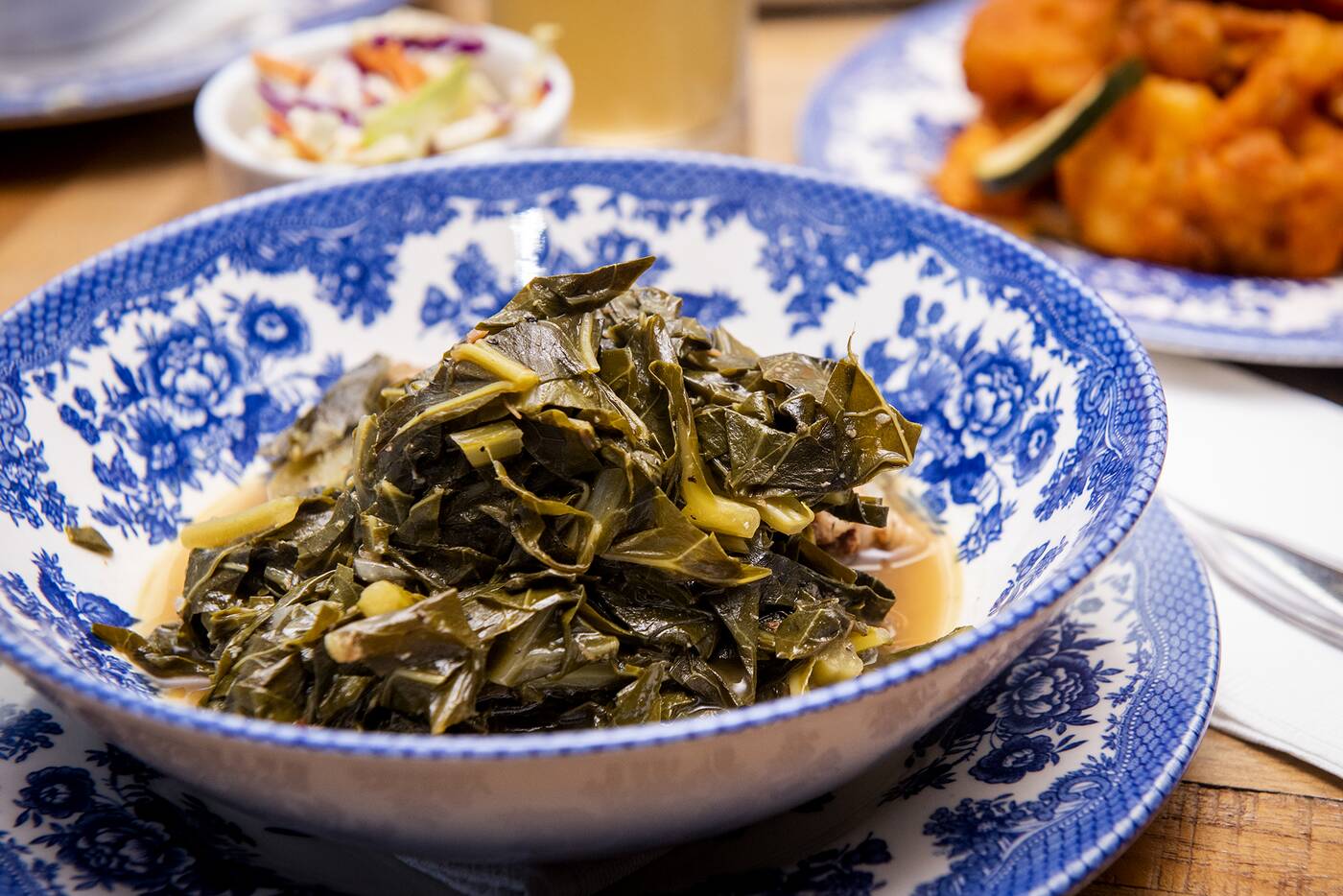 Collard greens ($8) are served steamy with sweet onions and smoked ham hocks, a little bitter but with a bit of that rich ham flavour creeping in. 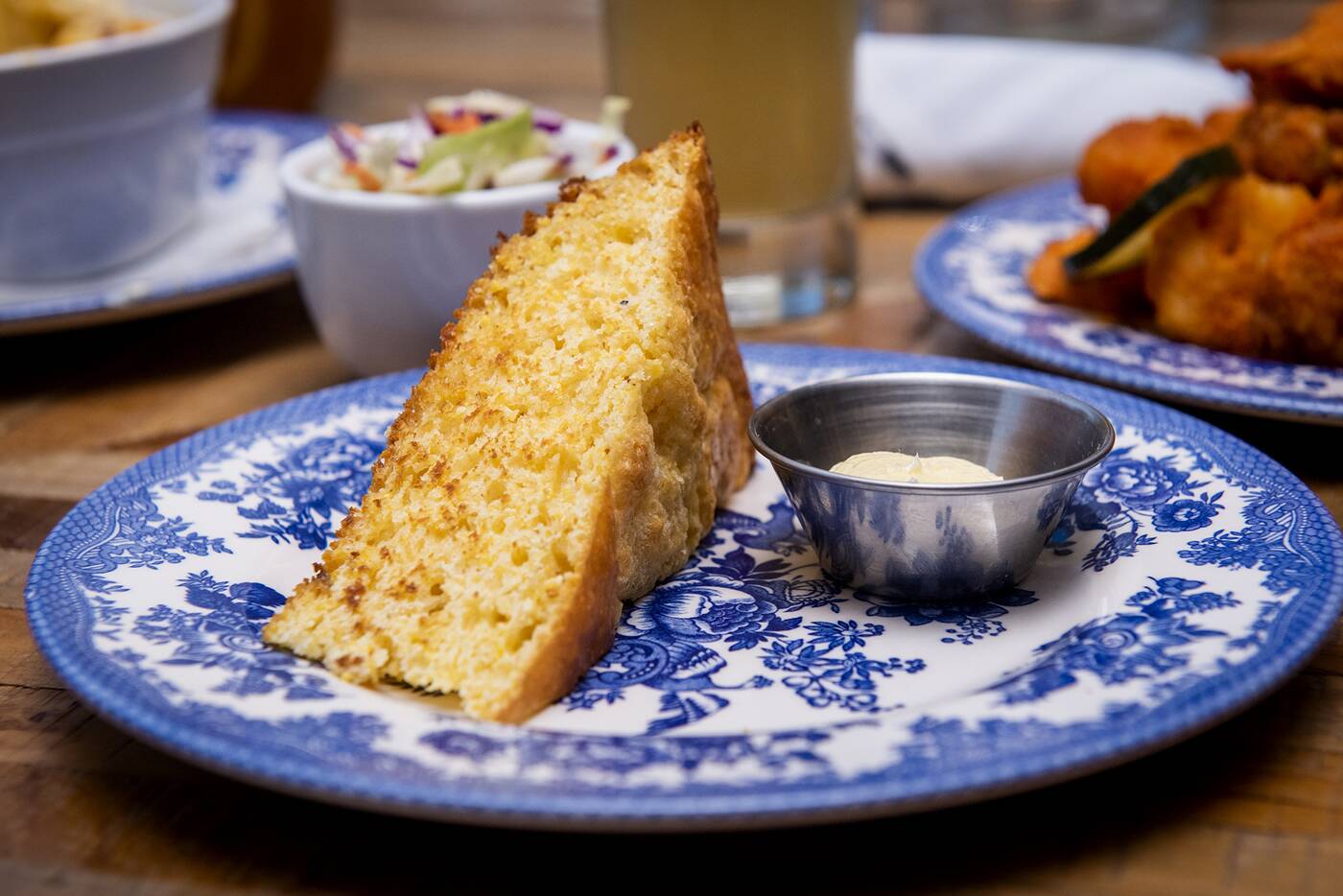 Cornbread with smoked salted butter or biscuits with jam go for $5, the cornbread nice and light and crumbly with a golden brown exterior. 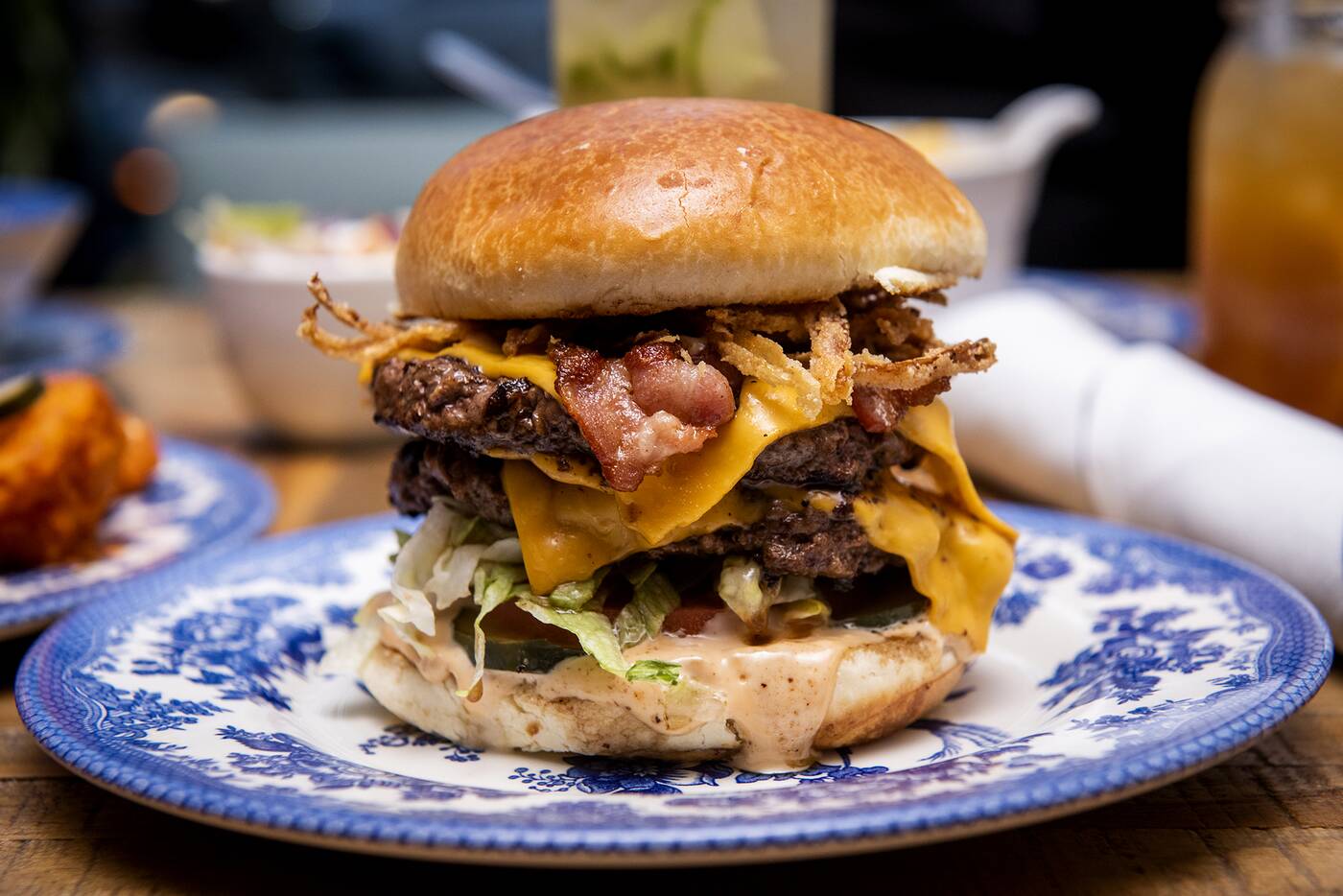 The Friday Burger ($16) is an epic, Insta-worthy burger that actually works: two grass-fed brisket patties that aren't too thick topped with cheese, bacon, lettuce and tomato with crispy onions on top and secret sauce on the bottom.

Though just barely, I can actually get my mouth around it to taste all the components at once, though each layer is easy to identify. 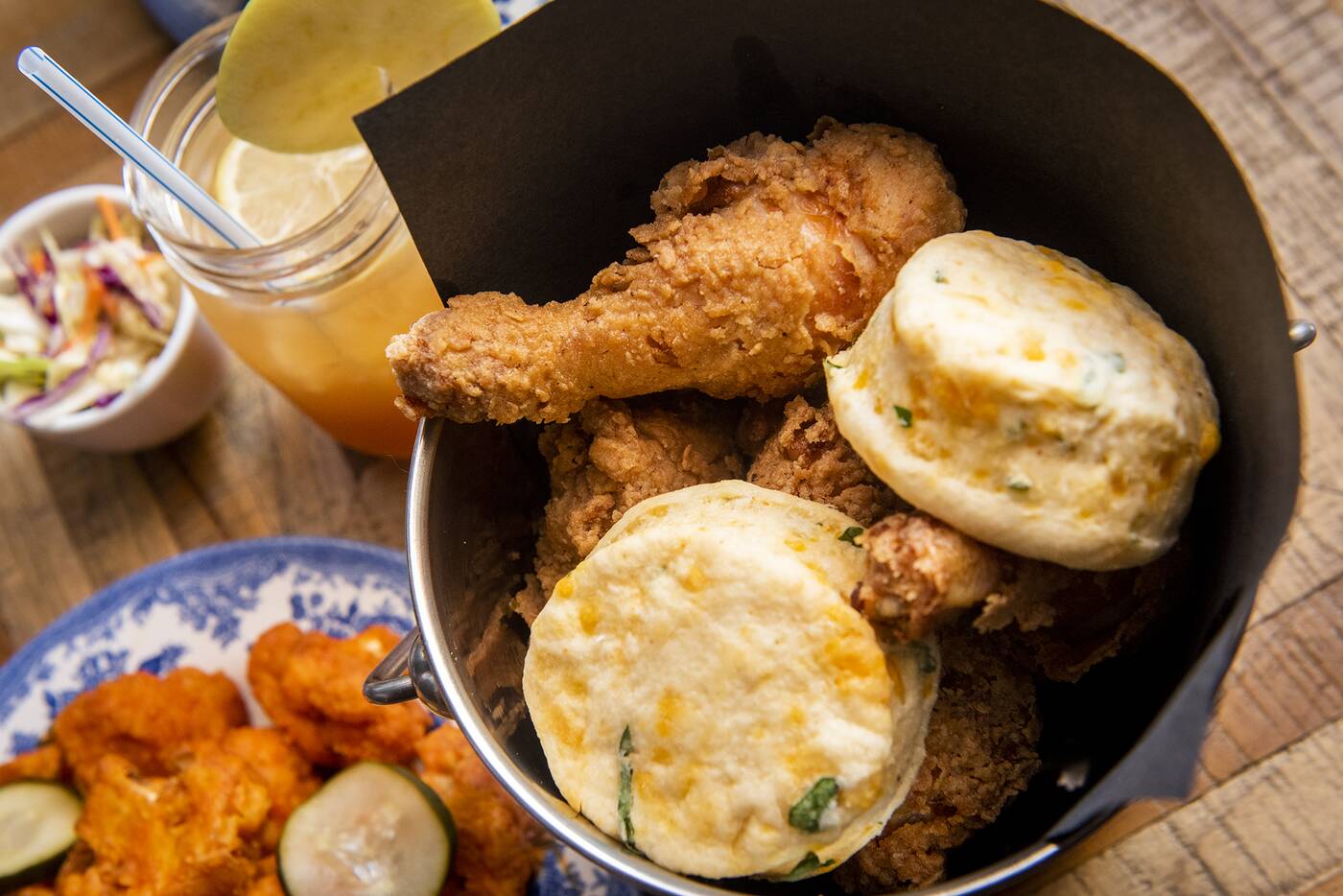 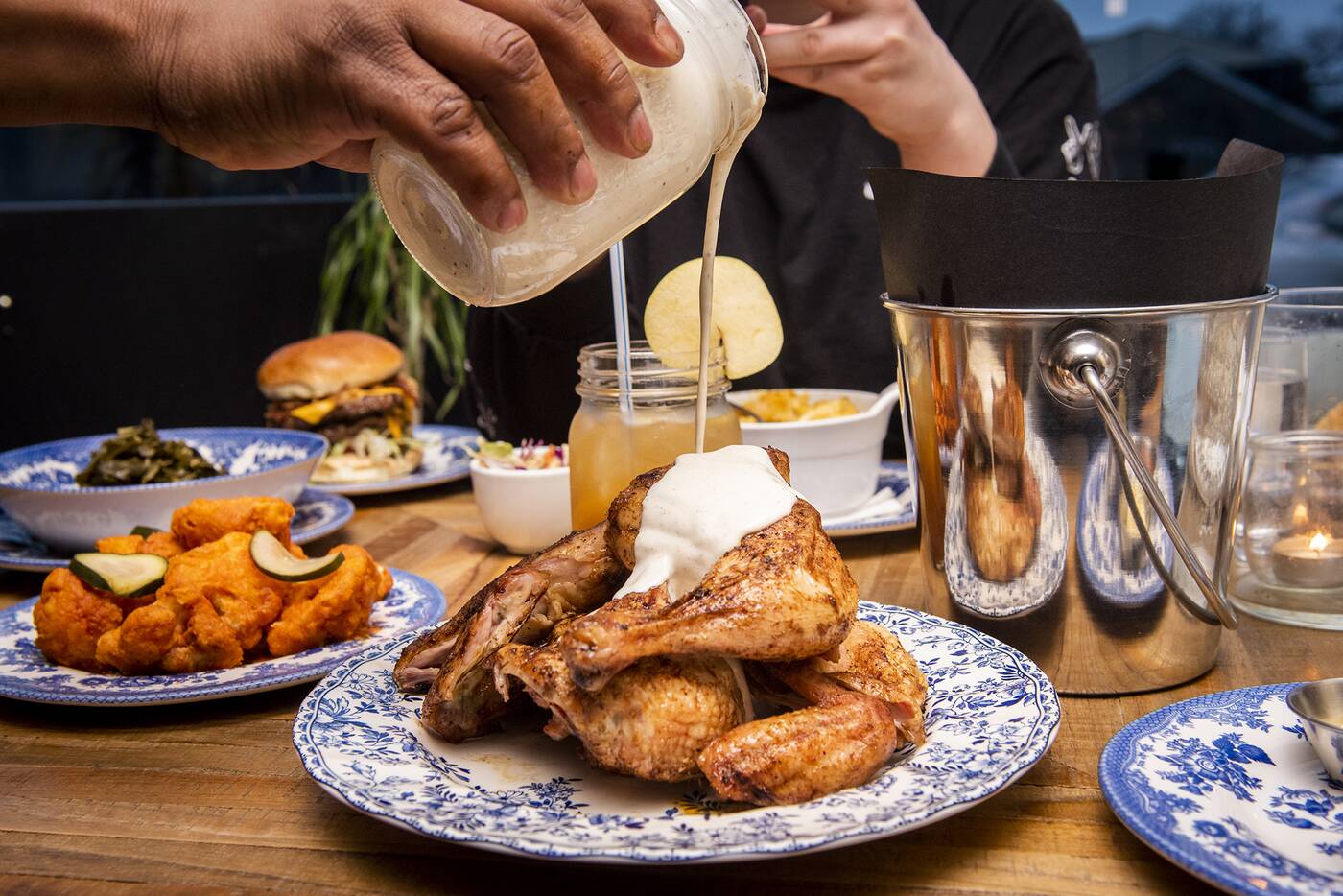 Smoked chicken has to be ordered a day in advance because it takes a day to prepare. Brined in the same way as the fried chicken, it’s served with an entire jar of tangy Alabama white sauce poured over the bird tableside. 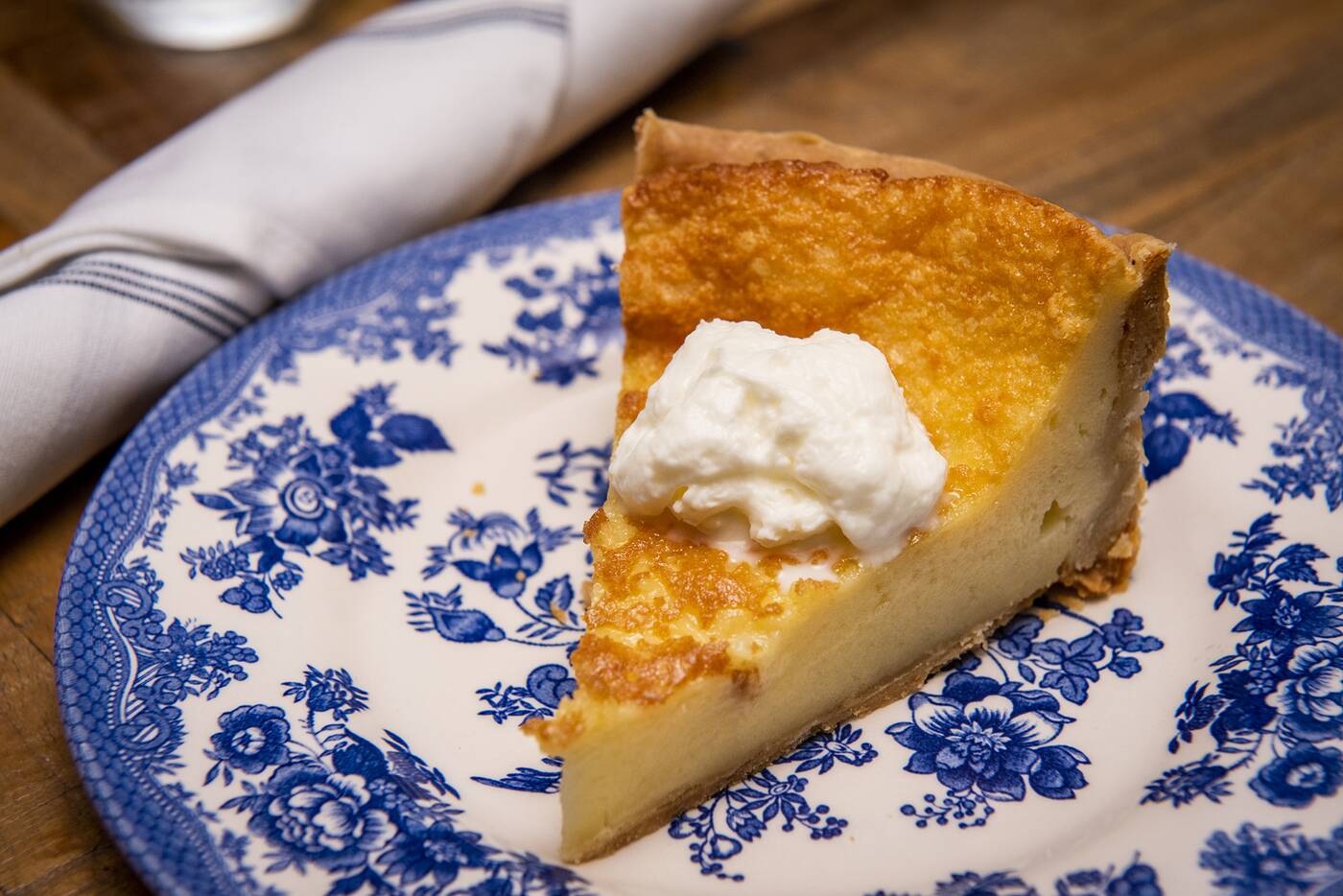 Dessert ($7) will always be some kind of pie, today's an iconic, custardy buttermilk. 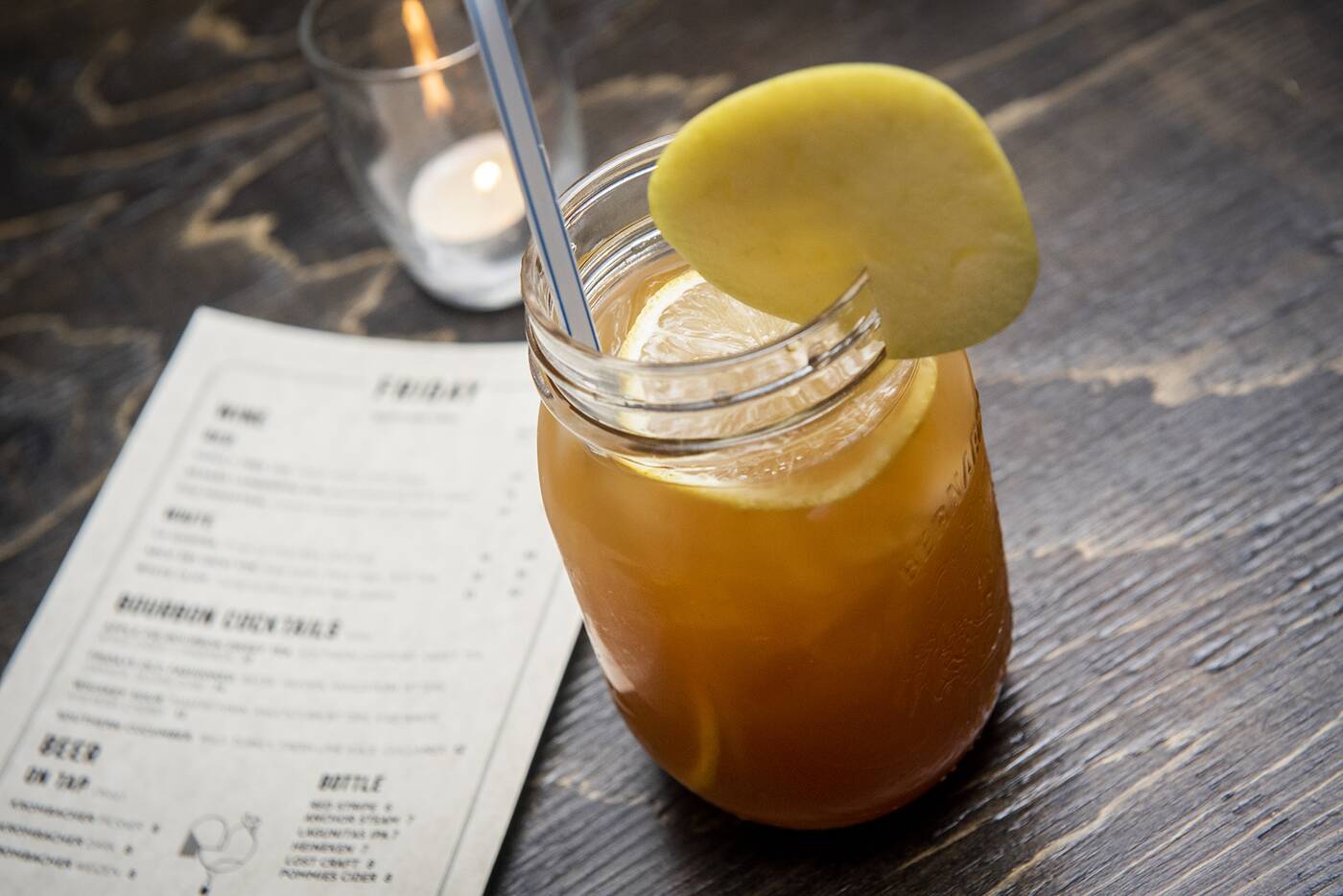 An apple pie bourbon sweet tea ($12) washes everything down almost too well, a combination of Southern Comfort, sweet tea, apple cider and cinnamon. 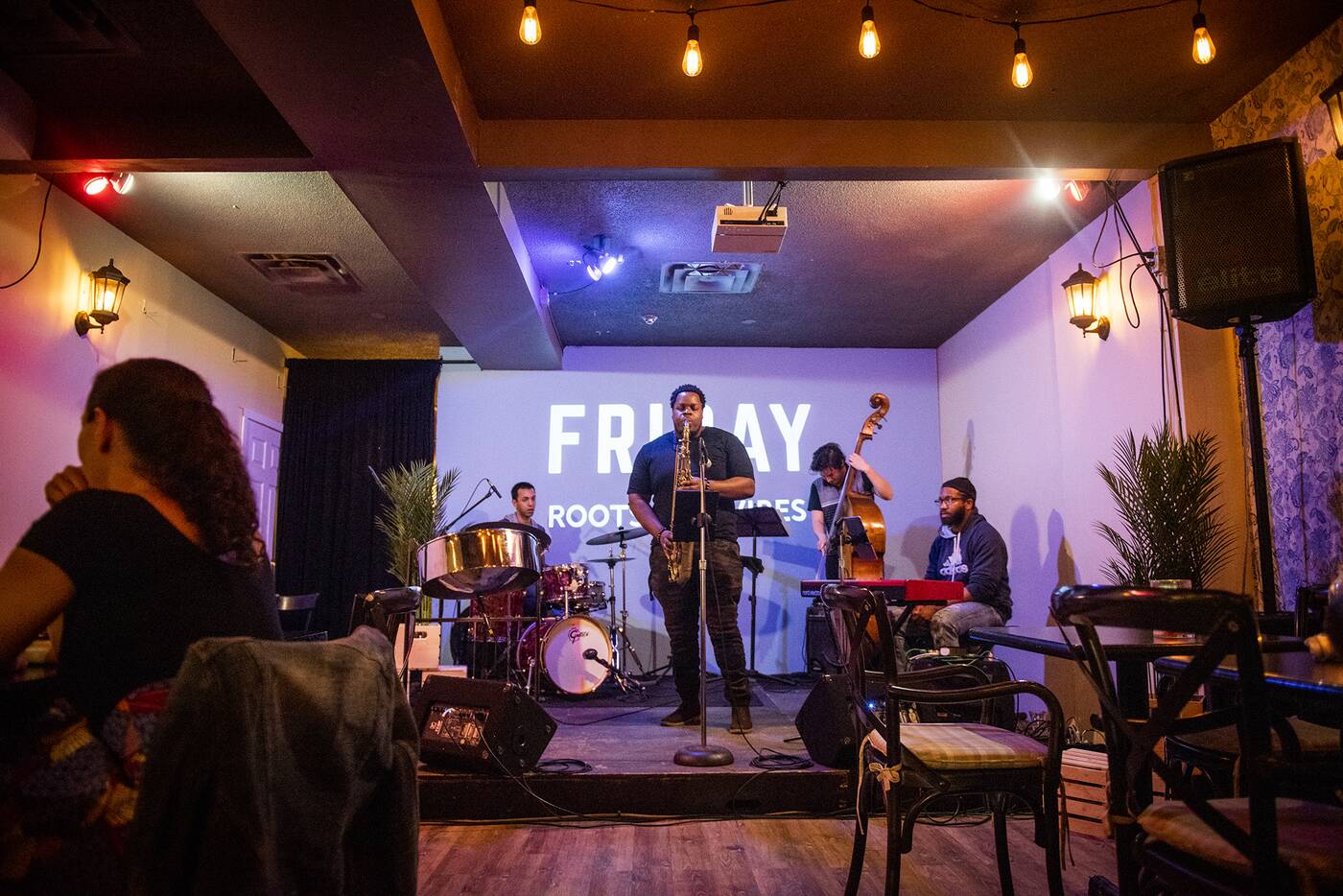 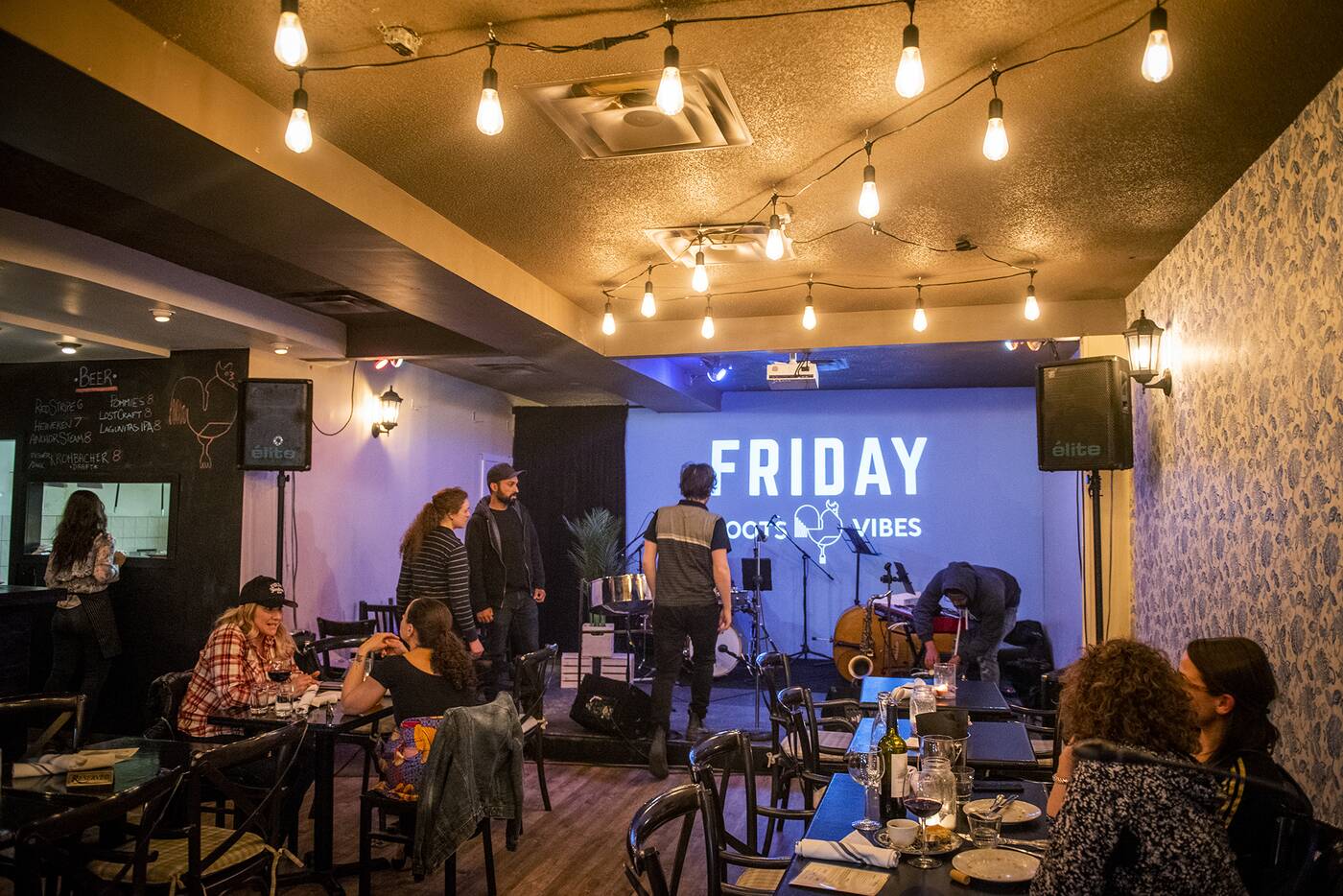 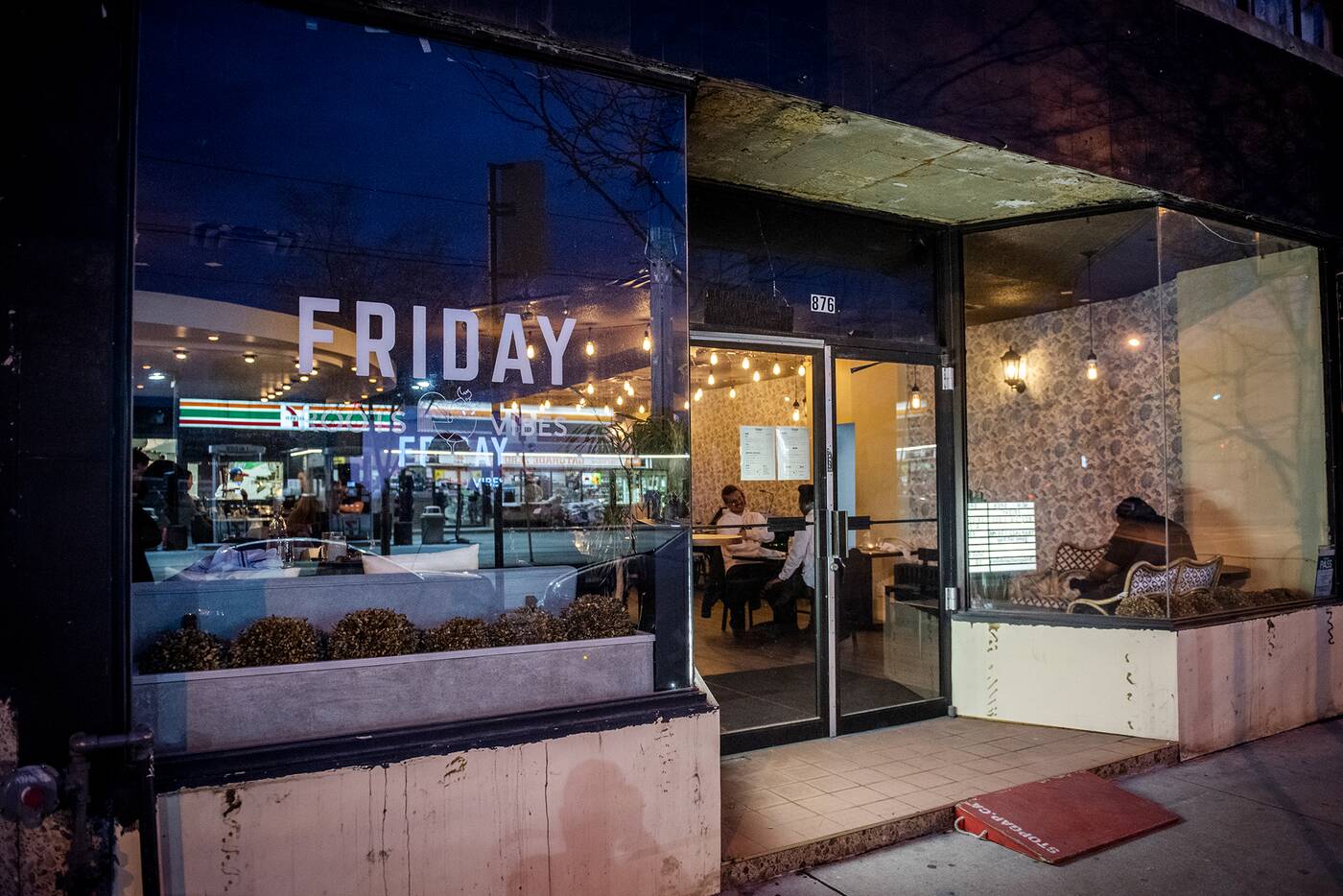