Earlscourt BBQ is the brainchild of the Pork Ninja himself, Jason Rees. A pro BBQ competitor who used to serve his platters of smoked meats at Wenona Lodge, he’s now opened his very own restaurant.

Those familiar with the old Wenona menu won’t find much variation here; all the old faves are listed. 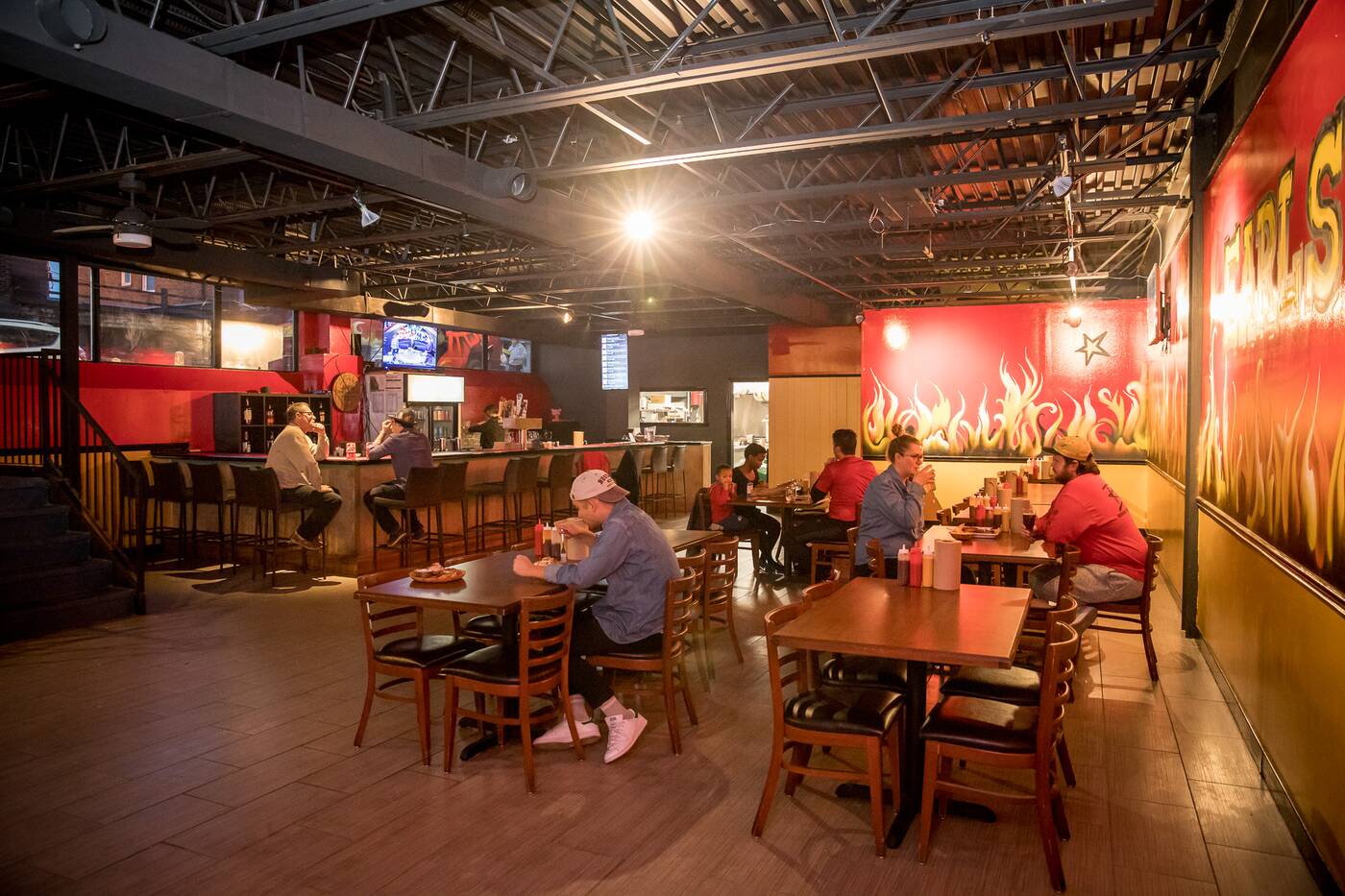 The spacious subterranean restaurant has a capacity of a hundred with a fifteen-seat bar. Long, bare tables fill the space, each complete with a roll of brown paper towel and an assortment of sauces. Flames are painted on the wall courtesy of local artist and friend of Rees’s @durothethird. 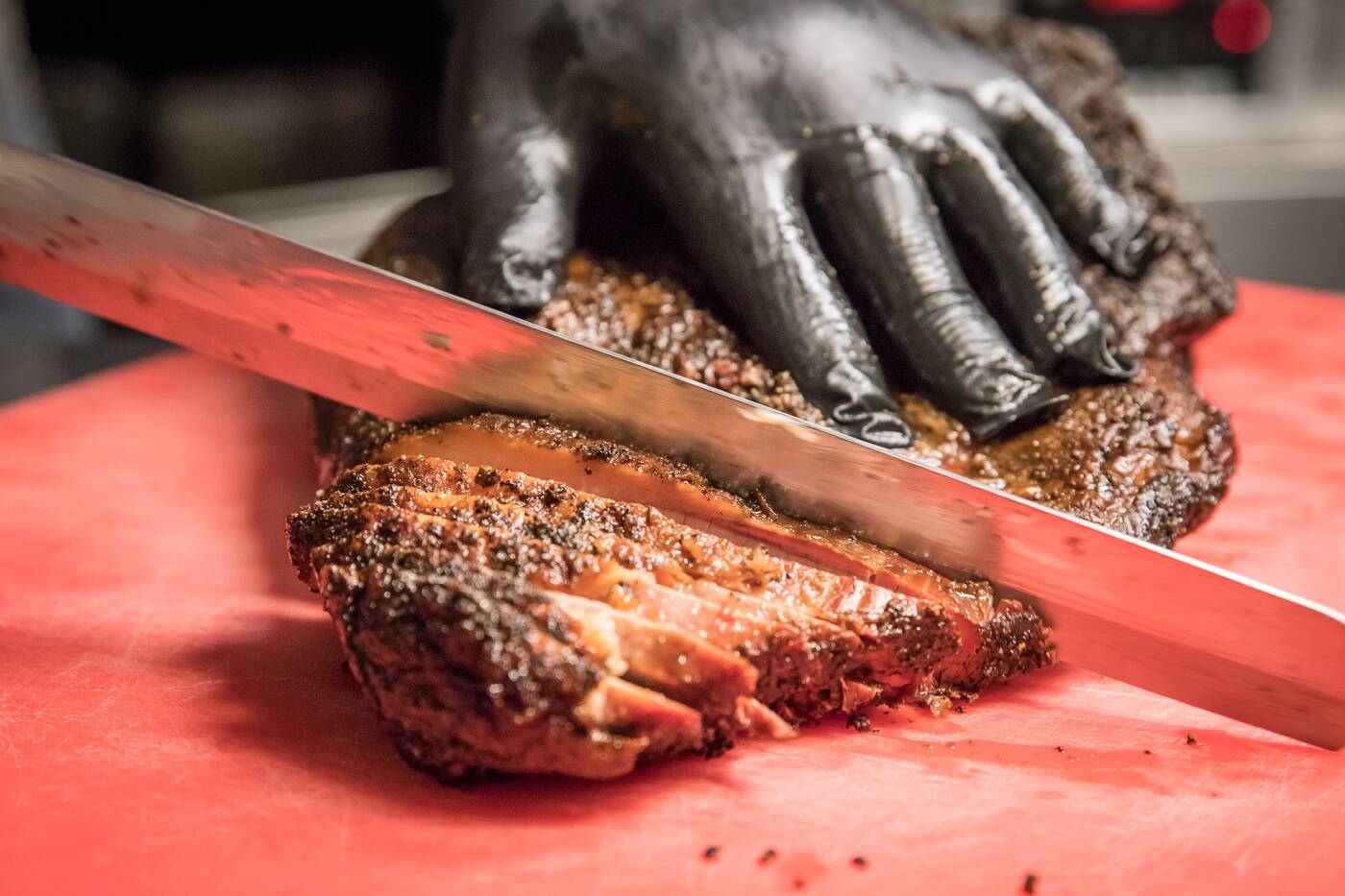 Everything gets smoked for a minimum of four hours here, typically using hickory for the sumptuous, fatty brisket that makes its way onto platters and sandwiches. 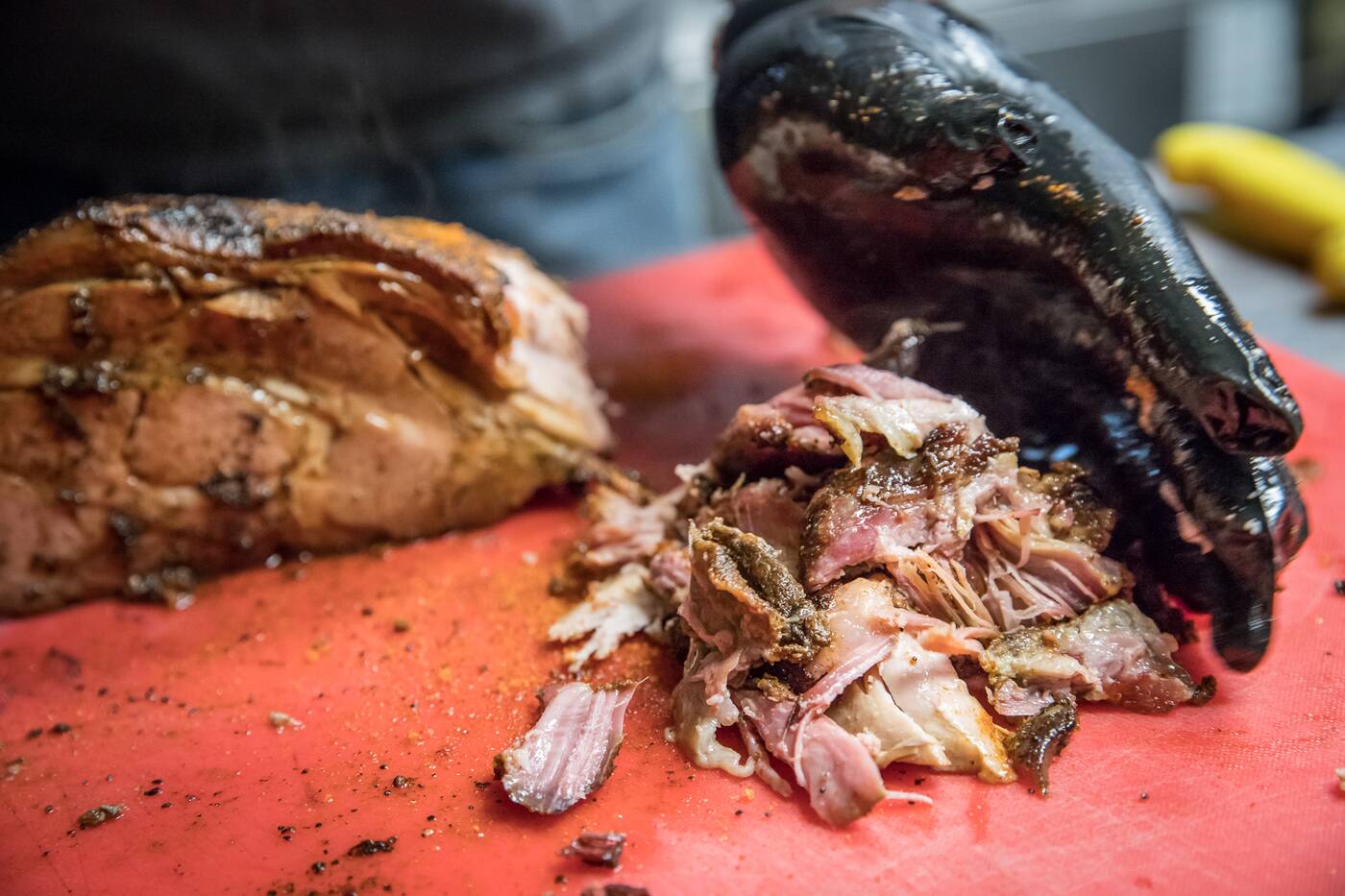 Fruit wood is typically used to smoke pork, such as the mouthwatering pulled pork: signature seasoned pork shoulder that’s hand-pulled to order, not chopped up and thrown in a bin. You get a little meat from the centre and a little of the barque with every order. 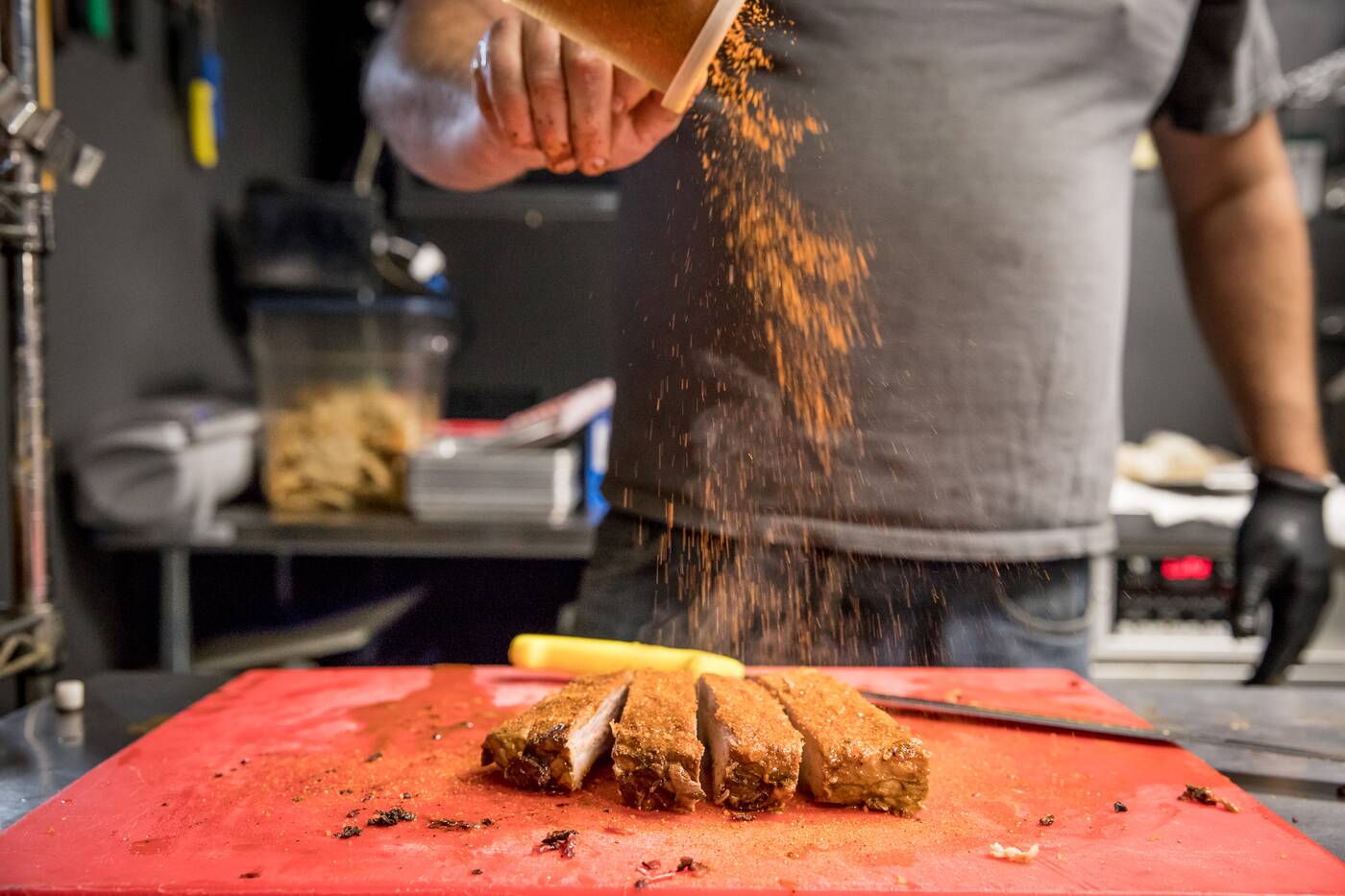 Most everything gets a hit of Rees’s “fairy dust,” but the pork always gets a healthy dusting. 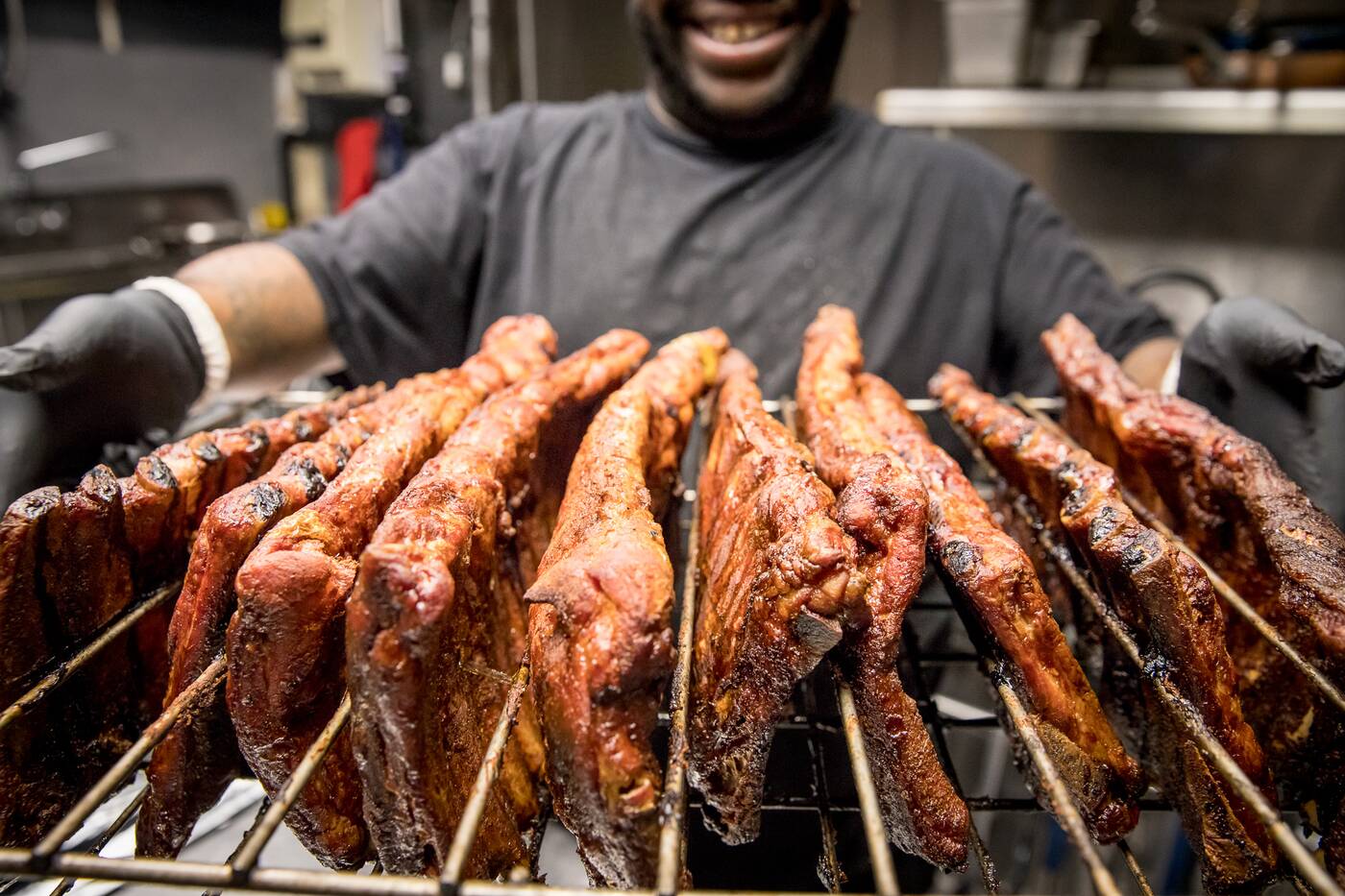 Memphis-rubbed and smoked for five hours, the ribs get the “Texas crutch” treatment: bathed in butter and brown sugar, wrapped in foil and kept somewhere warm until they’re served. 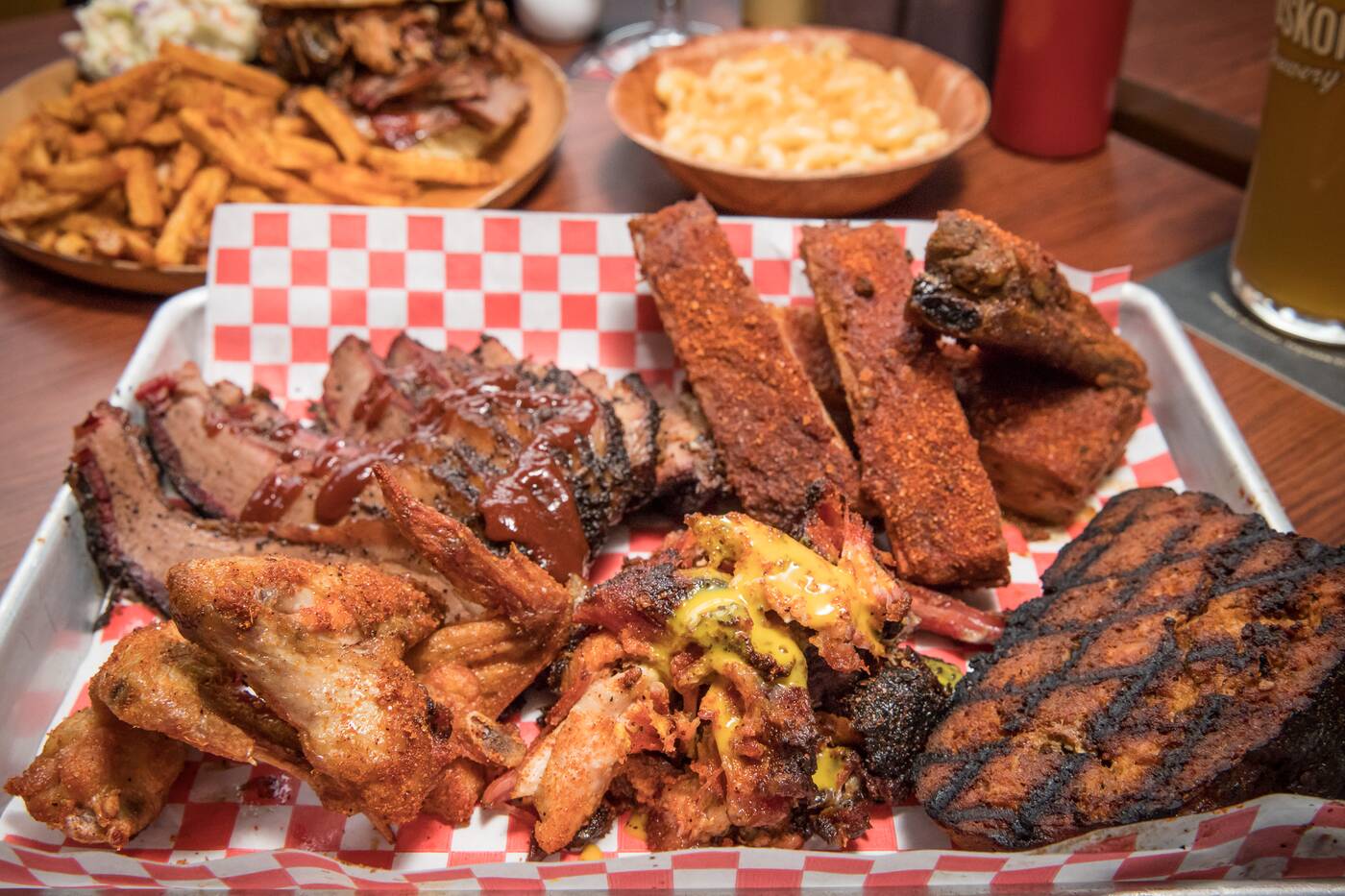 The Pitmaster’s Platter ($50, comes with two sides and a pig-shaped buttermilk biscuit) easily feeds two, with brisket, pulled pork, wings, ribs and grilled meatloaf. One or two components could change up, but this represents a typical platter. 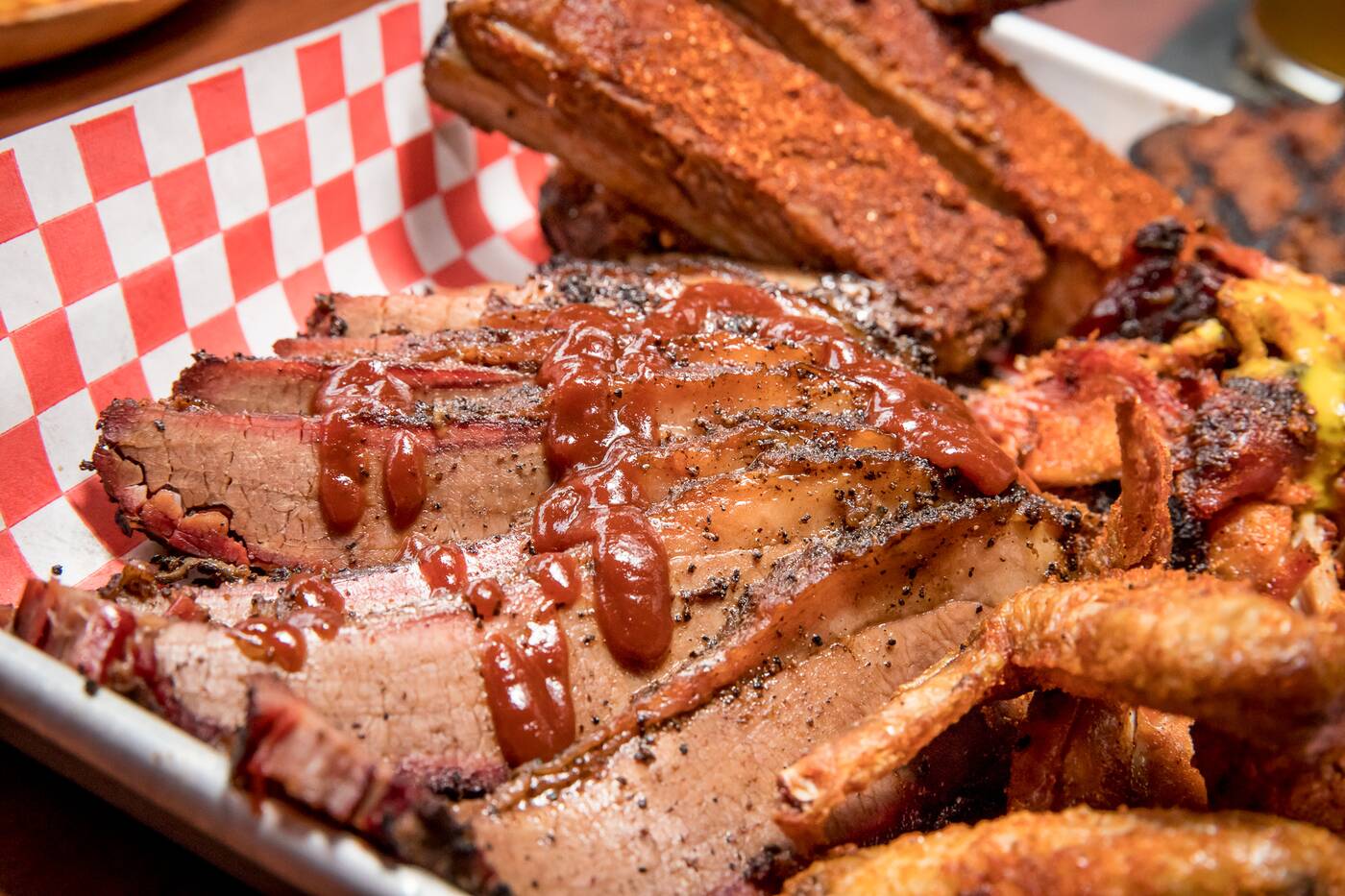 Complemented by malty, sweet and smoky Carolina Tang sauce, the brisket is peppery, moist and falls apart with the touch of a fork. 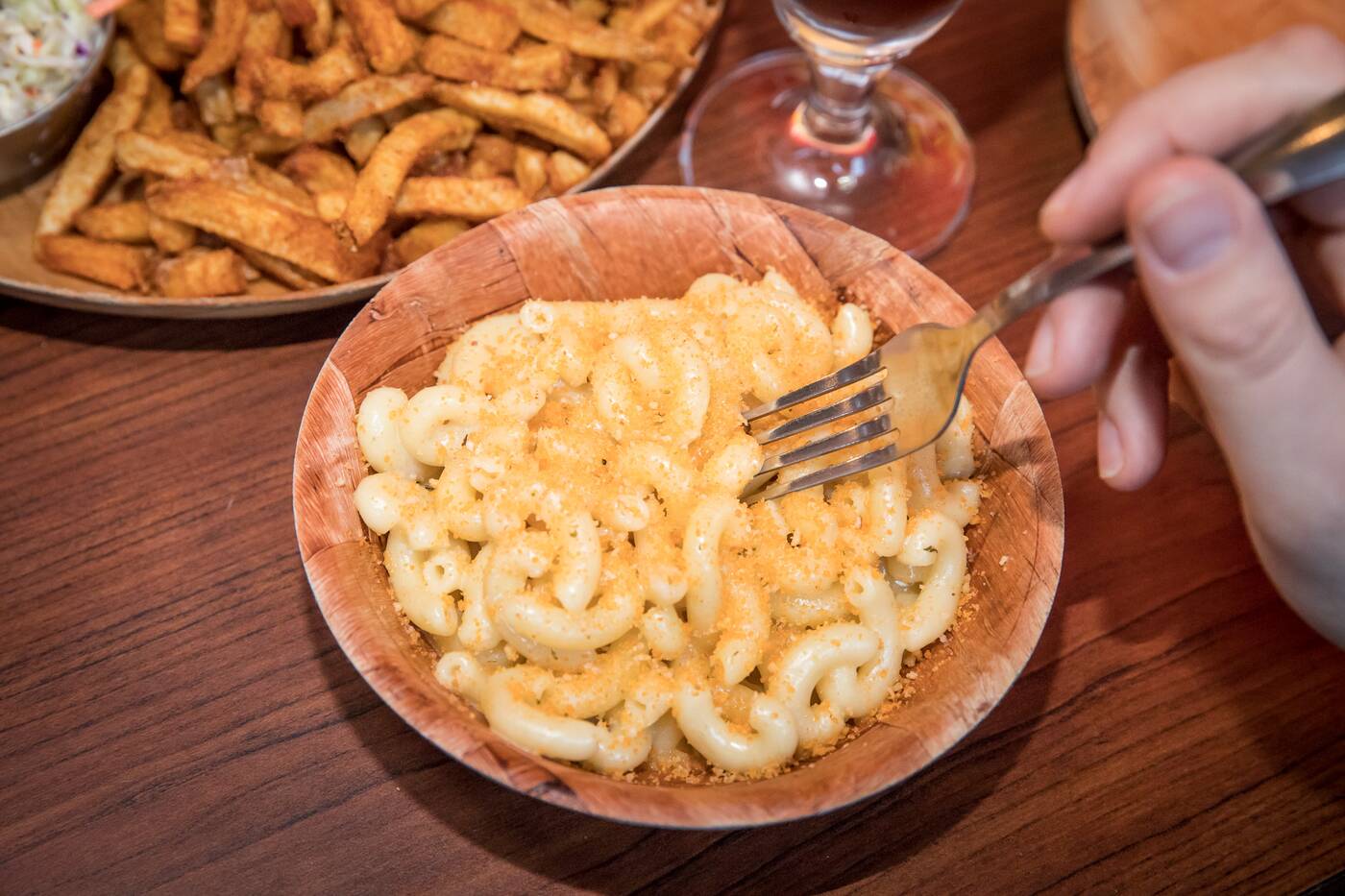 Mac & cheese ($12) has thankfully been preserved in all its pan-fried glory. The sauce is made with ultra-smooth Velveeta, cream cheese and cheddar and topped delightfully with a bread and Cheetos crumbs. 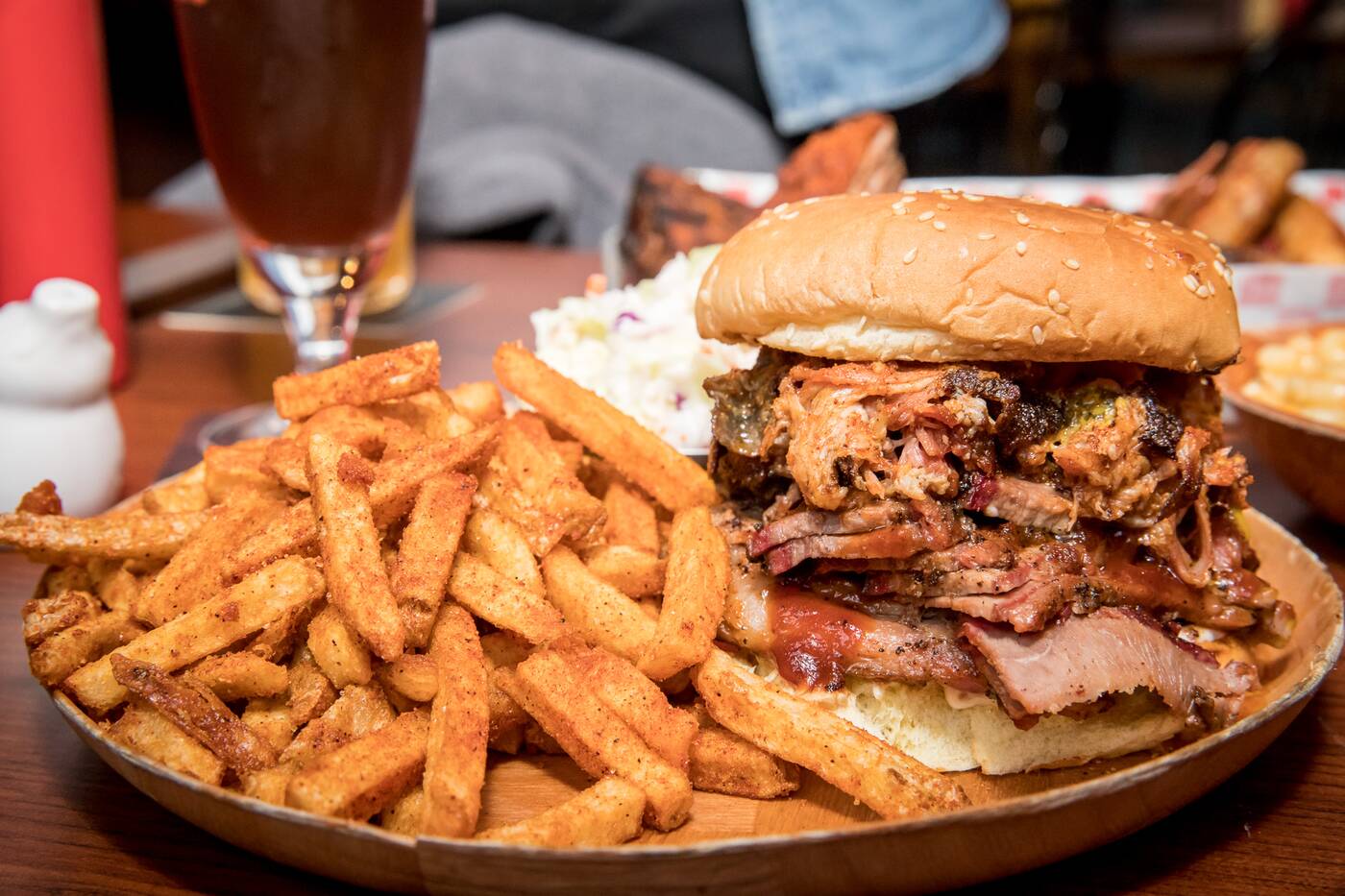 The Memphis Peacemaker ($19, served with seasoned fries and creamy slaw) is equal parts thinly-sliced brisket and pulled pork topped with pickled onions and a generous hit of Carolina sauce on a Wonderbread bun. 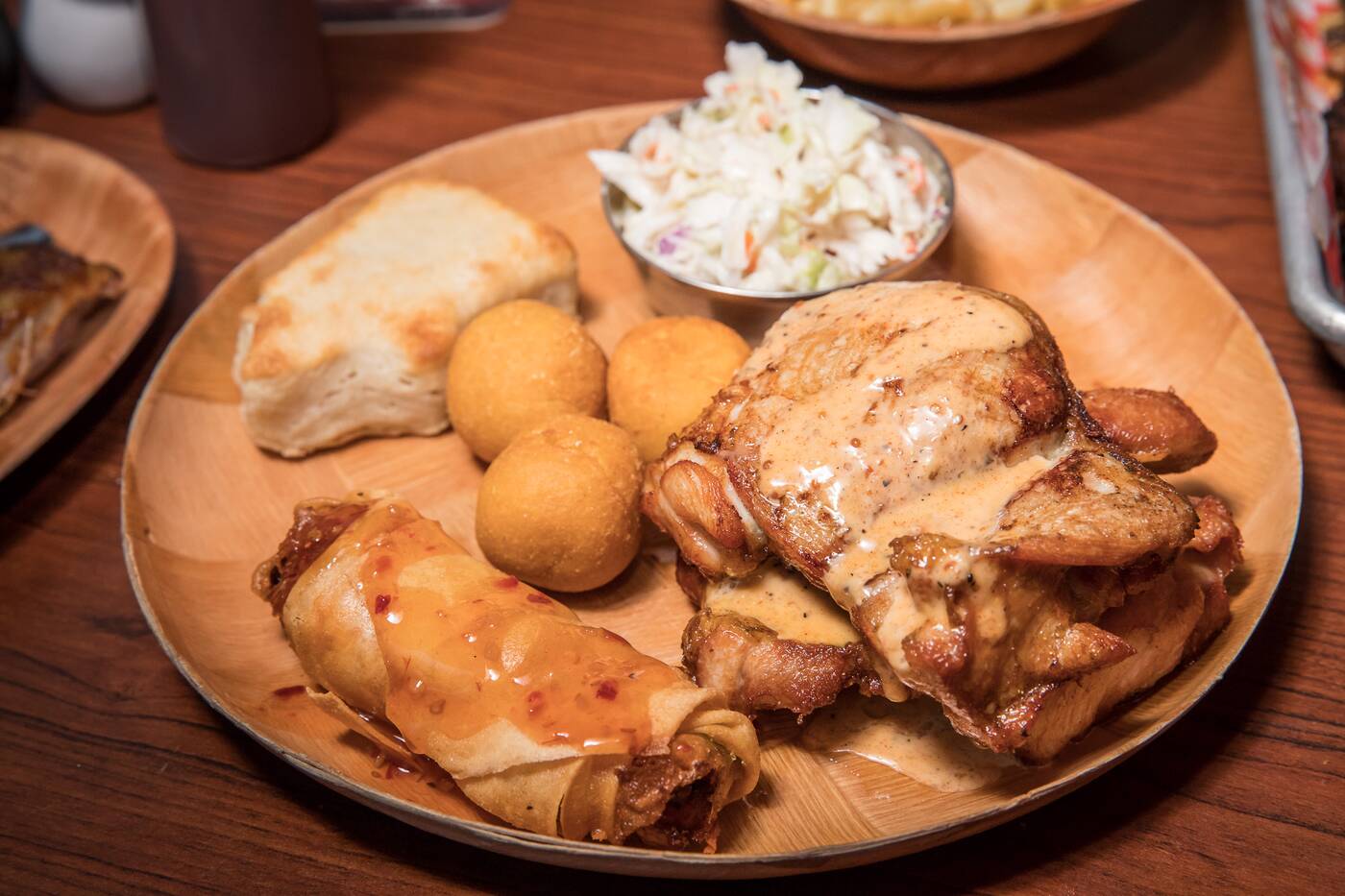 The Alabama fried chicken ($19) is another combo plate with two sides and a biscuit. Not your typical crunchy fried chicken, it’s brined, smoked, lightly battered and deep fried, doused in ’Bama white sauce. For sides we do some crispy hush puppies (great with hot sauce) and those indulgent pork & kimchi spring rolls that shouldn’t work but do. 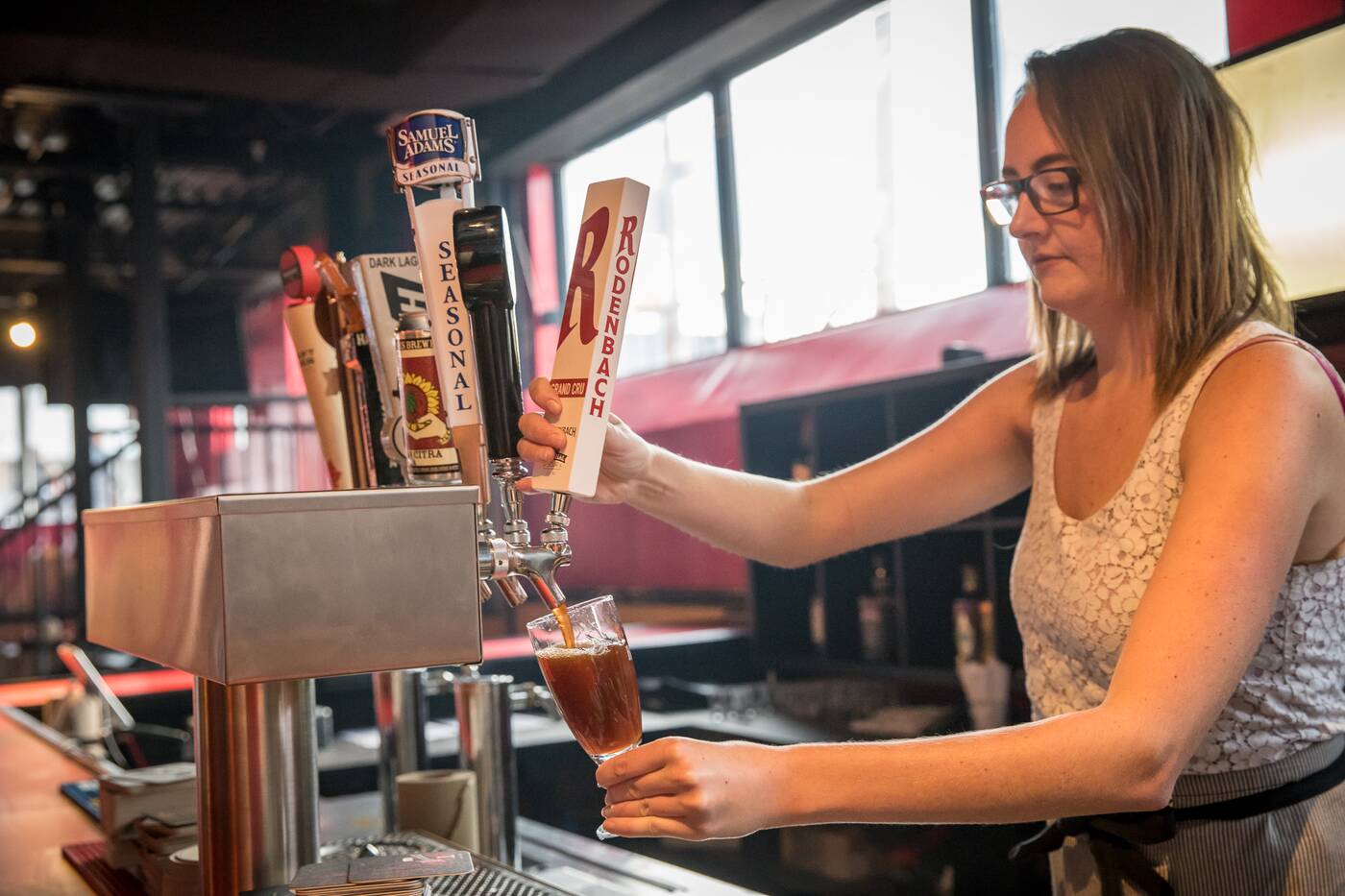 Earlscourt aims to be a destination not only for BBQ but craft beer too, with twelve taps and cask ambitions. 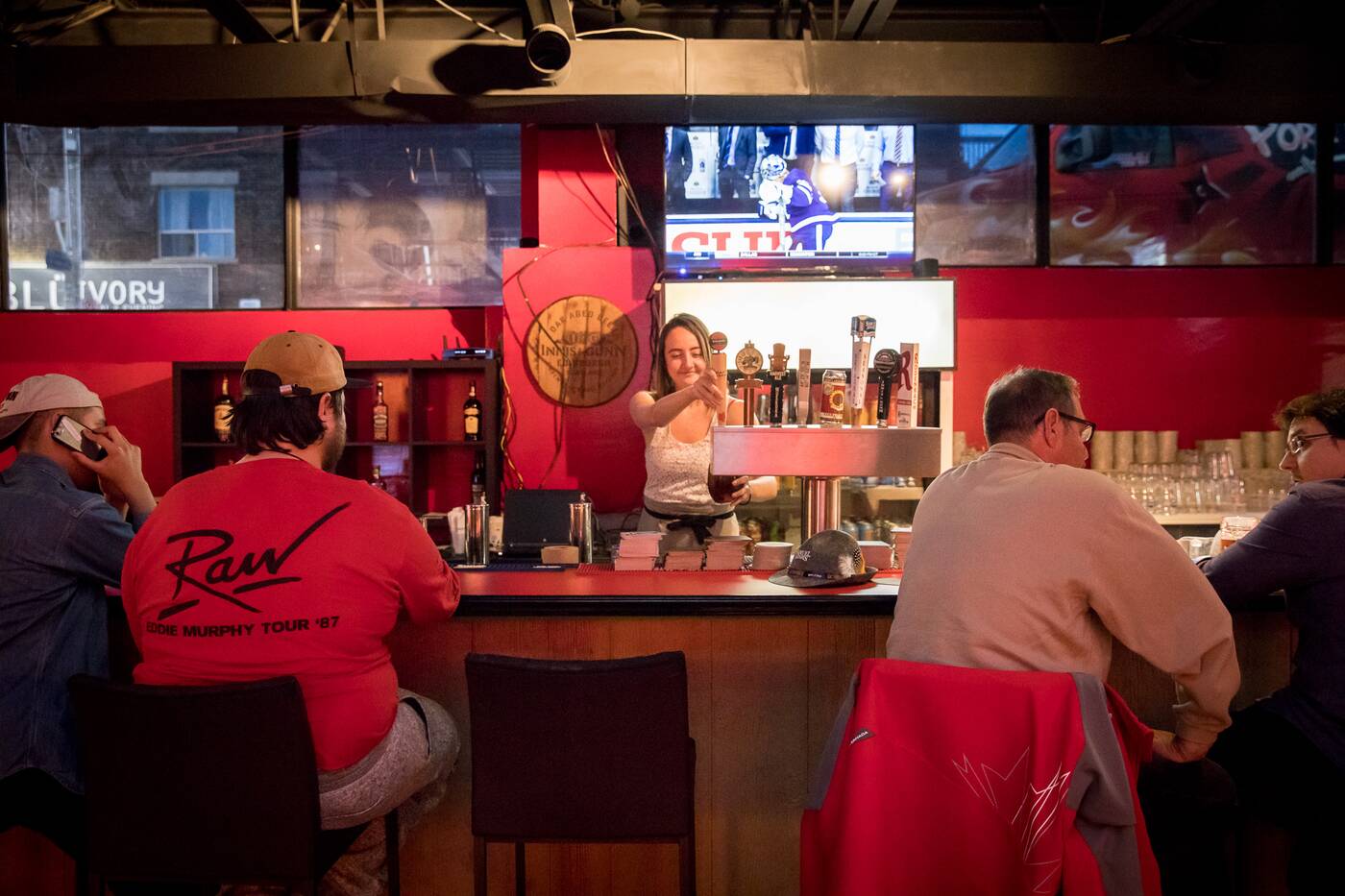 Rees has been in the BBQ game for a long time now and shows no signs of stopping, which is something to be relished by Toronto BBQ lovers. 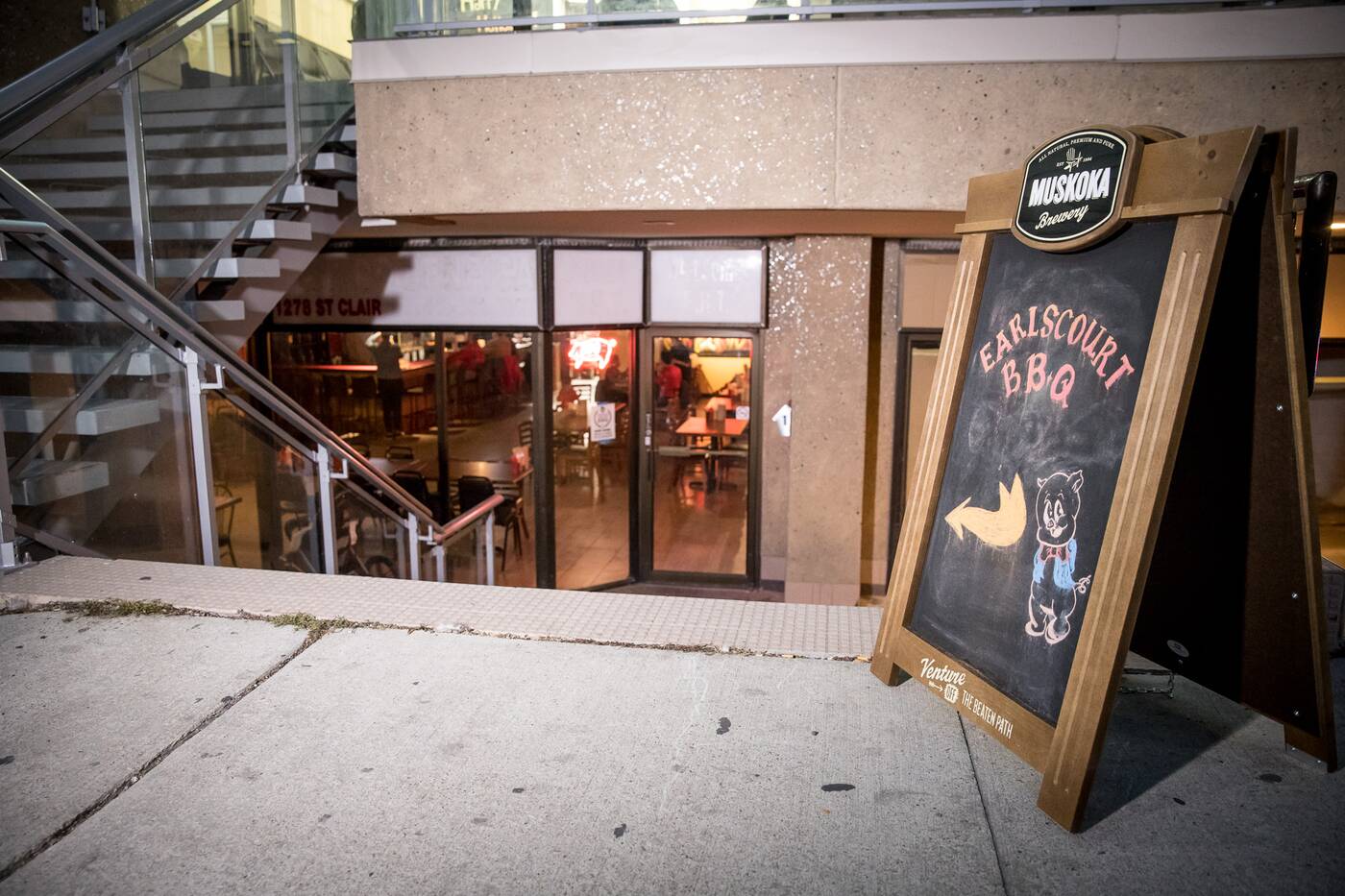